Accessibility links
Preparing For Sea Level Rise, Islanders Leave Home The government of Kiribati, a set of islands in the Pacific Ocean, is worried that climate change and population pressure could make significant parts of the country uninhabitable within the century. With help from abroad, it has begun the slow process of familiarizing residents with nearby Australia.

At the age of 20, Tiibea Baure had never seen a stoplight. She'd never been anywhere where she couldn't walk to the ocean in less than four minutes. She'd never slept in a bed before — just on the floor, with her extended family in the same room.

That was until August 2008, when Baure moved from Kiribati, a tiny island nation in the central Pacific Ocean, to the suburbs outside Brisbane, Australia. She remembers the first night she spent with her home-stay family — in a room of her own.

"I can't hear another noise or anything like that. It's like I'm all alone in that house. Because they hardly make noises. Not like back on the island — they shout, and they can sing anytime they want to sing. I just put my hand on my forehead and start thinking about Kiribati," Baure says. " 'Oh, now I miss Kiribati, I know that I really miss it!' "

In a house nearby, Freda Ariera — also from Kiribati — was having a similar experience. 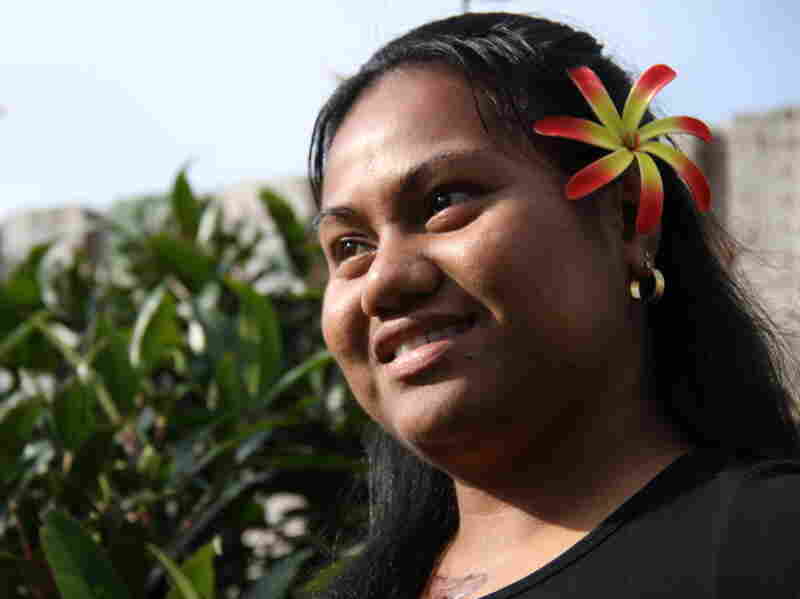 Tiibea Baure is one of more than 80 students studying nursing in Australia, as part of a program to help people leave Kiribati because of worries about climate change and overpopulation. Brian Reed for NPR hide caption 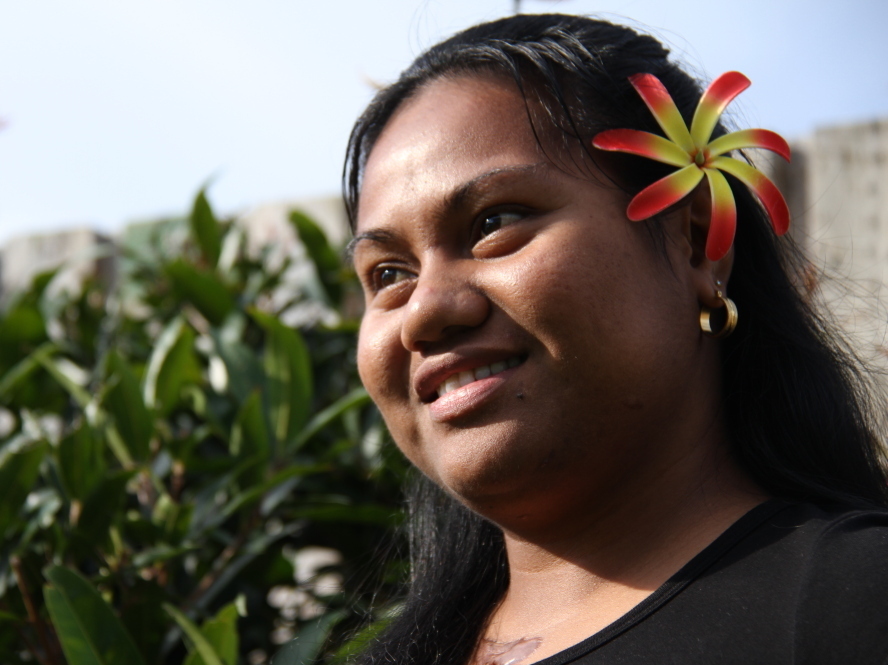 Tiibea Baure is one of more than 80 students studying nursing in Australia, as part of a program to help people leave Kiribati because of worries about climate change and overpopulation.

"I found it very hard to sleep on a bed," she says. So Ariera unrolled her traditional woven mat, which she'd brought with her from the islands, and slept there instead — to the surprise of her home-stay mother.

One morning she came into Ariera's room.

These episodes — the little cultural clashes, the homesickness — are actually a form of climate change adaptation. More than 80 people from Kiribati, including Baure and Ariera, are studying nursing at Australia's Griffith University on a special scholarship called the Kiribati Australia Nursing Initiative, or KANI.

It's sponsored by Australia's foreign aid organization, AusAID, and like similar programs, it aims to get i-Kiribati people jobs. Except KANI has one important difference: With most AusAID scholarships, students are trained and then required to return to their developing country, so they can help the place out. KANI, however, is training people in case one day they don't have a country to go back to.

It's a response to two major problems: climate change and overpopulation. Even though there are 33 islands in Kiribati, nearly half of the population lives on just one of them, the capital, South Tarawa. Already that puts a lot of pressure on the environment; drinking water can be in short supply, and land is scarce.

When you add climate change on top of that, which scientists predict will bring a higher sea level, longer droughts and more frequent storms, the government is concerned that significant parts of the low-lying nation could be rendered uninhabitable.

So i-Kiribati President Anote Tong has developed a strategy he calls "migrating with dignity."

"What it means is that we don't just pack up our people from the villages and transport them to one center in Australia and say, 'OK, there you are,' " he says.

Instead, Tong wants to give people economic incentives to move gradually, so they have time to adapt and to build a Kiribati community abroad. KANI is one of the first experiments doing that.

For some of the KANI students, it's unsettling to think that their country might, within their lifetimes, become unlivable. Baure says she often imagines what that would be like.

"To me, to live here in Australia and to think about that, that our country won't exist or our race," she says, her eyes welling with tears, "then it's like we are nothing. And to me if my country sink, then, I'm — it's like there's no use of exist as a human being." 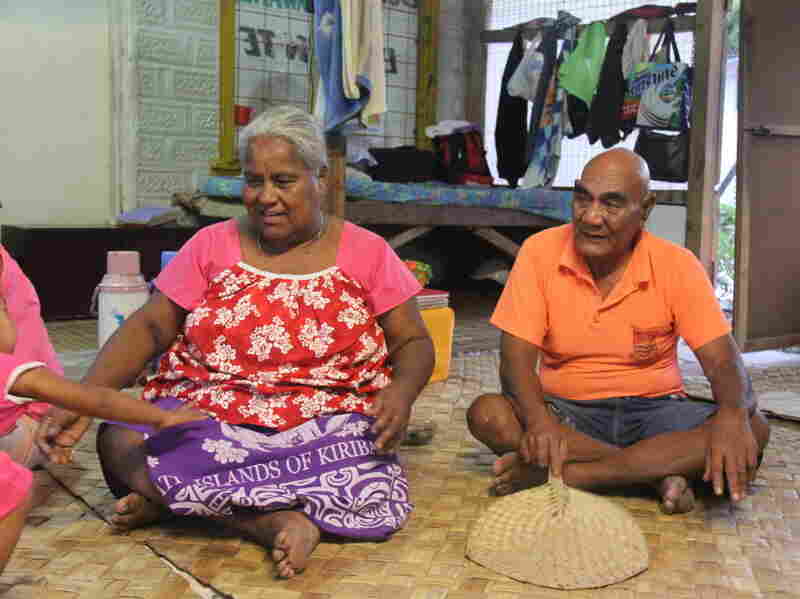 Batie Tebwa and Baure Karakaua sit on the floor of their home in Kiribati. Their daughter, Tiibea Baure, has repeatedly tried to convince them that climate change is a threat, but they don't believe in it. Brian Reed for NPR hide caption 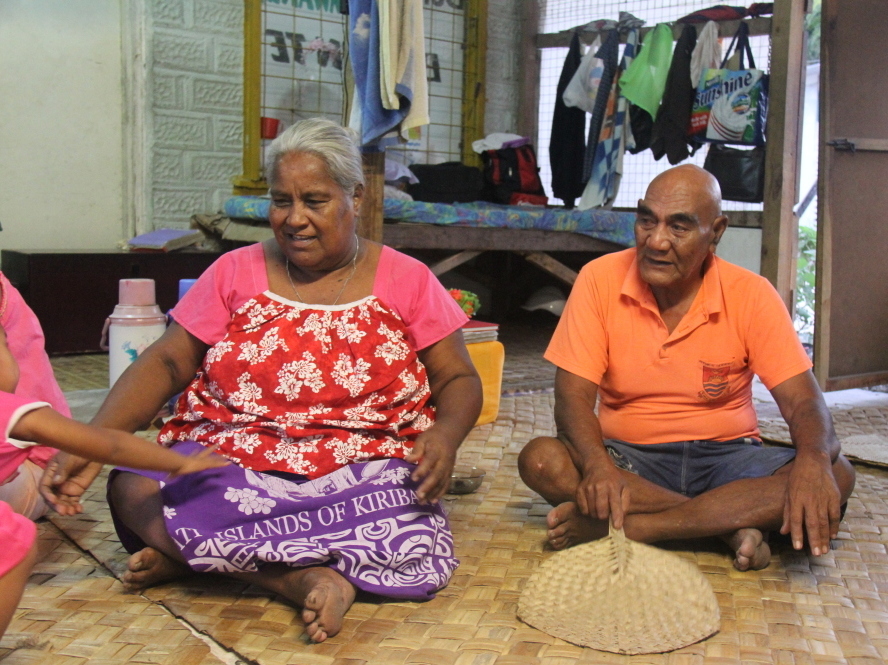 Batie Tebwa and Baure Karakaua sit on the floor of their home in Kiribati. Their daughter, Tiibea Baure, has repeatedly tried to convince them that climate change is a threat, but they don't believe in it.

"I think it's the most important part of me," she says of Kiribati.

To avoid dwelling on this, Baure focuses on her schoolwork. She wants to do well so she can get a job and bring her family to Australia.

"That's what helps me to keep going," she says. "Sometimes I experience that I'm about to give up. But that's one thing that always motivates me to endure to the end, so that I can bring over my family. I don't want them to die when the land sinks."

There's a debate about this in Kiribati — whether the president is unnecessarily scaring people with talk of relocation. And Baure is having that debate with her parents. She says every time she calls home, twice a month, she tries to convince them that climate change is a real threat to Kiribati. But they don't believe in it.

At Baure's parents' house in South Tarawa, you can see what she's up against. When asked about climate change, her father, Baure Karakaua, repeatedly makes jokes.

"Tiibea worries a lot about it," he says through an interpreter, who can't stop laughing. "I just say to her, 'When the sea coming, God will come under our island and raise it up a bit higher, so why's she so worried about it? God keep raising our island higher and higher, so we're not worried!' "

This has everyone in the house, including Karakaua, in stitches. But when I ask him if he's just joking, Karakaua clarifies that he does believe it's true: God will protect Kiribati from any changes in the climate or sea level.

Baure's mother, Batie Tebwa, agrees. Even though her daughter constantly tries to convince her that climate change is real, and she's heard the government issue warnings on the radio, nothing has changed her mind. 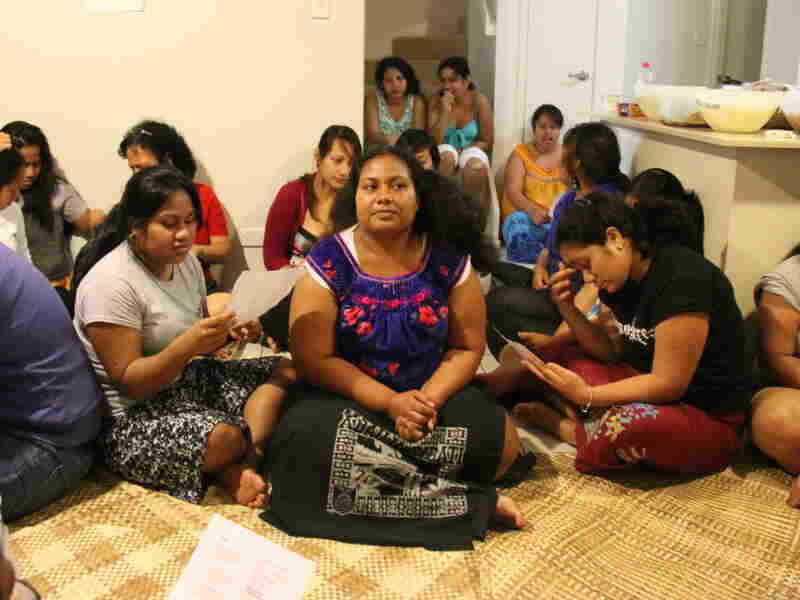 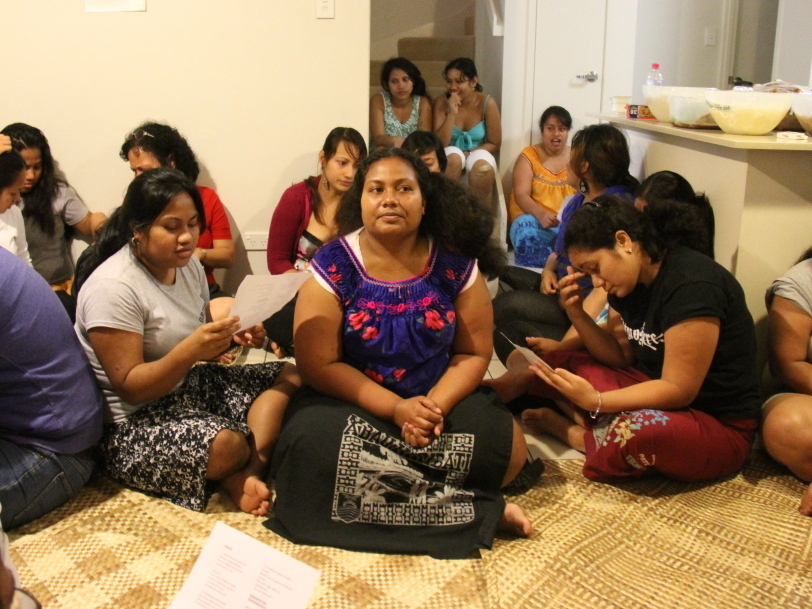 On a Wednesday night in Australia, about 40 KANI students gathered for a party. They crowded onto the floor in one of their condos, eating with their hands, just like back in Kiribati. Baure was there. There weren't enough traditional mats for everyone, so one girl ran to her place to get extras. When she returned, everyone started singing island songs.

At one point, a middle-aged woman in the room began to cry. She moved from Kiribati years ago to marry an Australian, and he had just died. The woman had asked the students to sing at the funeral, so they were practicing for it.

Four years ago, there would've been just a handful of people in this Australian suburb who knew any i-Kiribati songs. Now, there are close to a hundred.

Editor's Note: Brian Reed is NPR's first Above the Fray Fellow. The fellowship supports journalists who wish to report from a "far-flung or otherwise under-reported" region of the globe.