Accessibility links
Gene Mutation Key To Ecuador Group's Health A genetic mutation in a population in Ecuador seems to prevent diabetes and ward off cancer. It's also responsible for their short stature: most are under 4 feet tall. 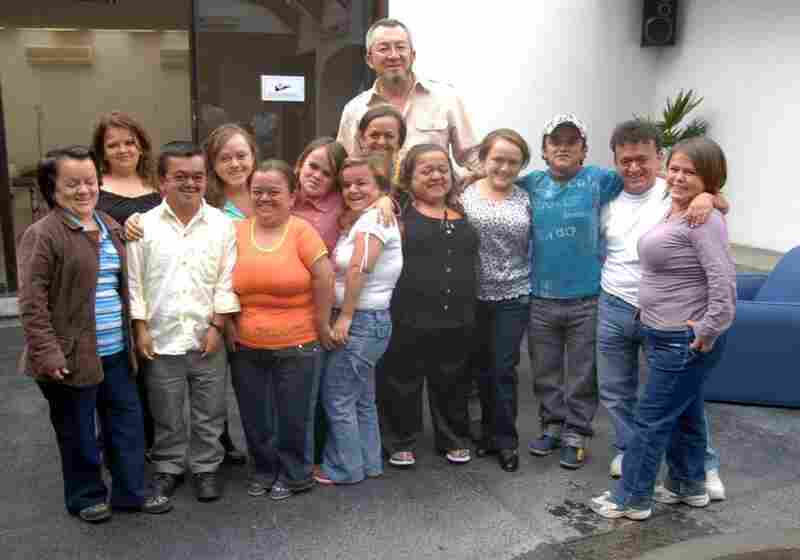 Jaime Guevara-Aguirre stands with some of the people who took part in his study of Laron syndrome in Ecuador. Courtesy of Valter Longo hide caption 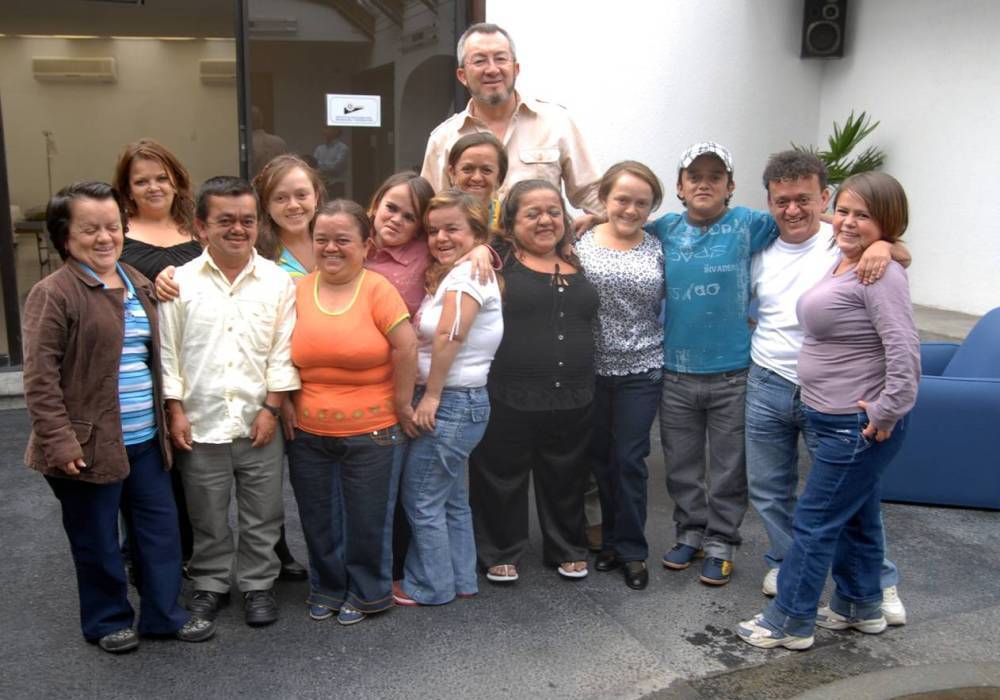 Jaime Guevara-Aguirre stands with some of the people who took part in his study of Laron syndrome in Ecuador.

Scientists have discovered a group of people in Ecuador with a rare gene mutation that could reveal ways to extend the human life span.

People with the syndrome are typically under 4 feet tall, but they are protected from cancer and diabetes, according to a study in Science Translational Medicine.

The study is the result of a scientific journey that started more than 15 years ago in a lab in Los Angeles.

Longo's research led him first to a particular type of genetic mutation and ultimately to the mountains of southern Ecuador to study people with Laron syndrome.

People with the syndrome lead generally normal lives, Longo says. "Some of them have families, and they seem to be pretty happy," he says.

Longo began studying these people after endocrinologist Jaime Guevara-Aguirre observed that they didn't seem to get diseases associated with aging, including diabetes and cancer.

Longo, Guevara-Aguirre and other scientists were able to confirm that observation when they studied more than two decades of medical records on 99 people with Laron syndrome.

"None of them ever developed diabetes," Long says. "And only one got cancer."

They compared them with taller relatives who did not have the syndrome and found that the relatives had much higher rates of these diseases.

The team thought this protection might come from the same gene mutation that made these people so small. Longo knew that a similar mutation greatly extends the lives of yeasts, worms and rodents, and he suspected that it might work that way in people too.

"There was only one major piece missing, which was the human data," he says, "and this is it."

How The Mutation Works

The mutation seems to prevent diabetes by allowing people to get by on very low levels of insulin, Long says. It wards off cancer by reducing DNA damage in cells, and helping to eliminate abnormal cells.

You might expect that all of this protection would allow the small people in Ecuador to live longer than their taller relatives, Longo says. But that's not what he found.

"The majority of them die of strange causes," he says, including alcohol abuse and accidents.

These are things that are preventable and not caused by a disease, Longo says. Subtract these deaths, he says, and it looks like people with Laron syndrome really would live longer than their relatives.

Longo says his study suggests that a whole group of people might be able to lower their risk of cancer and diabetes if they could lower their levels of growth hormone, or change the body's response to it.

The benefit would probably be greatest in people who have unusually high levels of the hormone, he says.

The idea that manipulating growth hormone could extend life is reasonable, says Robert Salvatori of Johns Hopkins University in Baltimore.

Salvatori has studied a group of small people in northeast Brazil whose bodies don't produce growth hormone at all. He says they also appear less susceptible to diseases associated with aging.

The researchers say it should be possible to devise a drug or diet that would lower growth hormone levels.

He says the new study may worry people taking growth hormone for medical reasons, including children whose growth would be stunted without the hormone, but there is good scientific evidence that children who are prescribed growth hormone to reach normal height are not at increased risk of cancer, he says.

"So I think that parents should not worry too much about this," Salvatori says

But he says athletes or others who are taking large doses of growth hormone to build muscle should take the new study as a warning.

There is already good evidence that people with pituitary tumors that produce growth hormone face an increased risk of cancer, Salvatori says. He says there is good reason to think that taking high doses to build muscle would have the same effect.