Accessibility links
Bahrain Defends Deadly Assault On Protesters Bahrain's foreign minister said the decision to use anti-riot police to dislodge protesters in the capital had pulled the country back from the "brink of sectarian abyss." Police used tear gas and clubs as they stormed Pearl Square. Troops and tanks then appeared on the streets for the first time since the uprising began. 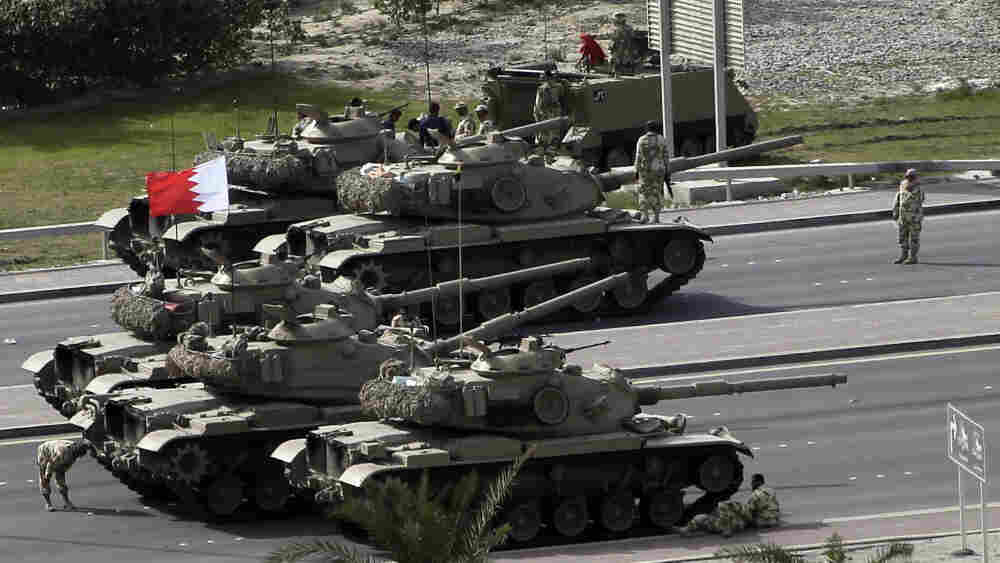 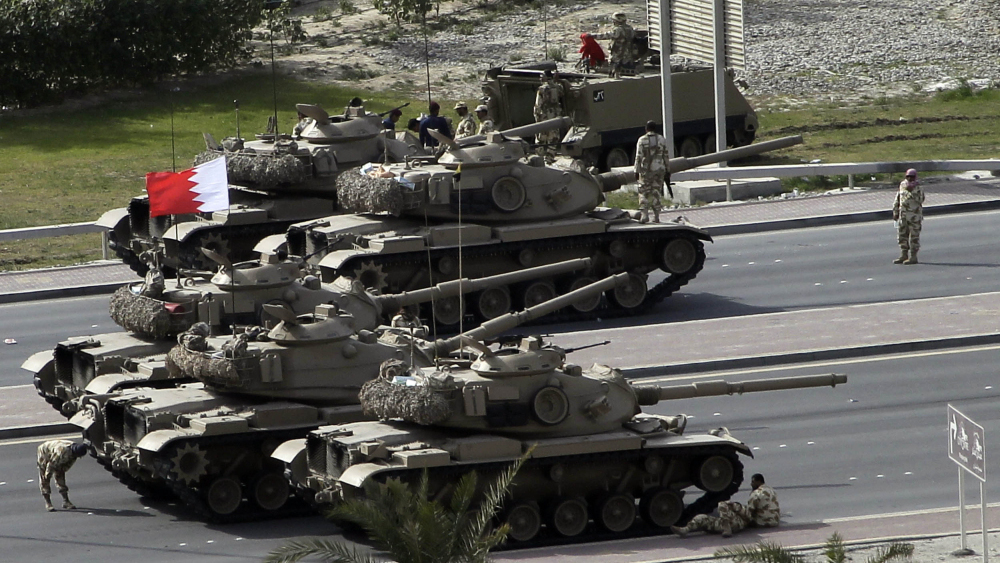 Bahraini army tanks take position near Pearl Square in Manama on Thursday after anti-riot police stormed through the square.

Bahrain's foreign minister defended a bloody crackdown on protesters Thursday, saying the government's decision to send anti-riot police to dislodge thousands of people in the capital had pulled the country back from the "brink of sectarian abyss."

Khaled bin Ali Al-Khalifa, speaking at a news conference, called the opposition uprising a "rebellion against the government and against the nation" and said the pre-dawn assault had preserved the "people's right to express themselves." 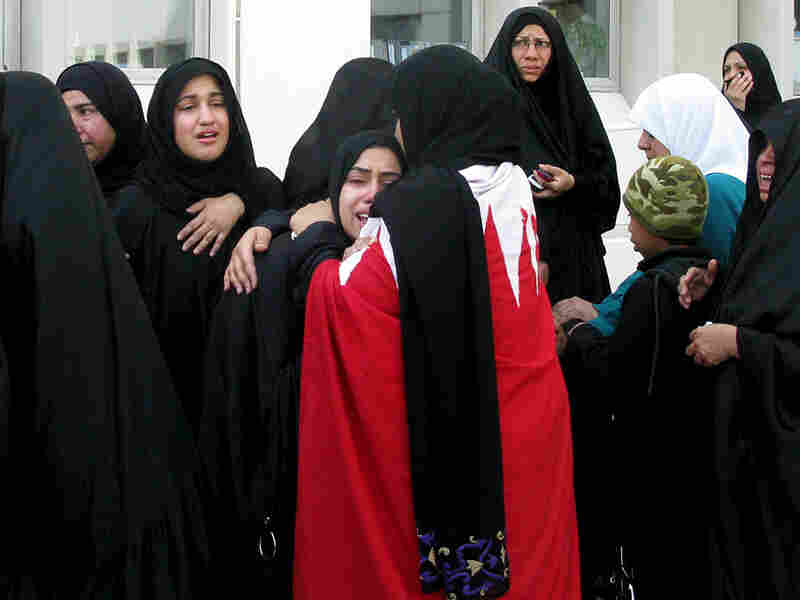 Women in Manama, Bahrain, mourn over the dead and wounded from Thursday morning's police raid of a protesters' camp in the capital's central square. Peter Kenyon/NPR hide caption 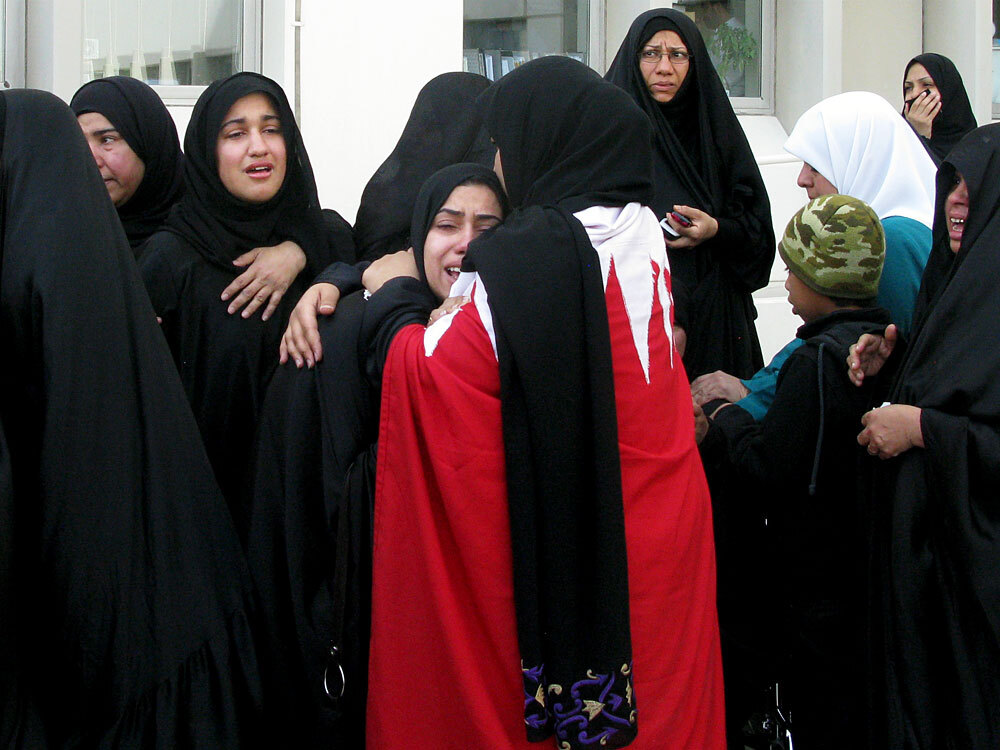 Women in Manama, Bahrain, mourn over the dead and wounded from Thursday morning's police raid of a protesters' camp in the capital's central square.

Armed patrols and tanks patrolled the streets of the capital, Manama, in a show of force after riot police using tear gas and shotguns drove protesters from a main square where they had demanded political change in this tiny kingdom. Medical officials said at least four people were killed, but government officials said three people died.

Hours after the attack on Pearl Square, the military announced on state TV that it had taken control of "key parts" of the capital and banned gatherings after days of demonstrations for greater public and political freedoms in the Shiite-dominated, Sunni-ruled country.

"The grief is turning to anger very rapidly here," NPR's Peter Kenyon reported from the capital.

Protests in Libya and Yemen also reportedly resulted in clashes Thursday as anti-government unrest continued to sweep through the Middle East and Northern Africa.

'They Were Shooting Tear Gas From The Bridge'

In Bahrain, 'Dramatic Change' In Tenor Of Unrest

Mahmoud Mansouri, a protester, said police surrounded the camp filled with sleeping people and quickly moved in. "We yelled, 'We are peaceful! Peaceful!' The women and children were attacked just like the rest of us," he said. "They moved in as soon as the media left us. They knew what they're doing."

Kenyon said hundreds of police seized a bridge overlooking the square and used it to launch tear gas into the crowd.

"They attacked our tents, beating us with batons," said Jafar Jafar, 17. "The police were lined up at the bridge overhead. They were shooting tear gas from the bridge."

Many families were separated in the chaos. An Associated Press photographer saw police rounding up lost children and taking them into vehicles. ABC News said its correspondent, Miguel Marquez, was caught in the crowd and beaten by men with billy clubs, although he was not badly injured.

A body covered in a white sheet lay in a pool of blood on the side of a road about 20 yards from the landmark square. Police cleared away the wrecked tents, and the street was littered with broken glass, tear gas canisters and other debris.

They moved in as soon as the media left us. They knew what they're doing.

The Interior Ministry said Thursday that the protests were illegal and that all avenues for negotiations had been exhausted.

On Bahrain's state television, the government said the protesters were armed with swords and other weapons, and that riot police used bullhorns to warn them to leave the square before beginning the assault.

NPR's Kenyon said the protesters he spoke to said they had heard no such warning and were "certainly not armed."

Military Moves In Amid Sense Of Stunned Disbelief

Wounded people streamed by the dozens into Salmaniya Hospital, the main state-run hospital in Manama, with serious gaping wounds, broken bones and respiratory problems from the tear gas. Hospital officials, speaking on condition of anonymity because they were not authorized to talk to the media, said four people were killed early Thursday.

The scene at Salmaniya was one of stunned disbelief that the government — which had been talking of a peaceful resolution of protesters' demands just hours before — had ordered police to clear the square, NPR's Kenyon reported.

At the hospital mortuary, Kenyon said, he saw "one of the more gruesome sights in 10 years of covering the Middle East ... a man lying on a gurney, the top of his head was literally blown off."

The man, a driver named Issa Abdel Hassan, was shot and killed by police at point-blank range as he tried to reach the square during the crackdown, his son told NPR.

Several paramedics who were receiving medical treatment said they had been pulled from their ambulance and beaten. Outside the medical complex, dozens of protesters chanted, "The regime must go," and burned pictures of the king.

Tanks and armored personnel carriers were seen on some streets — the first sign of military involvement in the crisis — and authorities sent a text message to cell phones that said: "The Ministry of the Interior warns all citizens and residents not to leave the house due to potential conflict in all areas of Bahrain."

The violence in the square is likely to inflame protesters and up the ante on their demands. Before the attack, protesters had called for protests after Friday prayers, and the reported deaths could become a fresh rallying point.

"We are even angrier now," Makki Abu Taki, whose son was killed in the assault, shouted in the hospital morgue. "They think they can clamp down on us, but they have made us angrier. We will take to the streets in larger numbers and honor our martyrs. The time for Al-Khalifa has ended."

The protesters' demands have two main objectives: force the ruling Sunni monarchy to give up its control over top government posts and all critical decisions, and address deep grievances held by the country's majority Shiites, who claim they face systematic discrimination and are effectively blocked from key roles in public service and the military.

Tiny Bahrain also is a pillar of Washington's military framework in the region. It hosts the U.S. Navy's 5th Fleet, which is a critical counterbalance to Iran's efforts to expand its clout in the region.

"As a longtime ally and home to the U.S. Navy's 5th Fleet, Bahrain is an important partner and the department is closely watching developments there," Pentagon spokesman Col. Dave Lapan said Thursday. "We also call on all parties to exercise restraint and refrain from violence."

U.S. Secretary of State Hillary Clinton spoke to Bahrain's foreign minister Thursday to express "deep concern" about the events, according to the State Department.

Any prolonged crisis opens the door for a potential flashpoint between Iran and its Arab rivals in the Gulf. Bahrain's ruling Sunni dynasty is closely allied to Saudi Arabia and the other Arab regimes in the Gulf. But Shiite hard-liners in Iran have often expressed kinship and support for Bahrain's Shiite majority, which accounts for 70 percent of the island's 500,000 citizens.

The protest movement's next move is unclear, but the island nation has been rocked by street battles as recently as last summer. A wave of arrests of perceived Shiite dissidents touched off weeks of rioting and demonstrations.

Thousands of mourners turned out Wednesday for the funeral procession of 31-year-old Fadhel al-Matrook, one of two people killed Monday in the protests. Later, in Pearl Square, his father, Salman, pleaded with protesters not to give up.

"He is not only my son. He is the son of Bahrain, the son of this nation," he yelled. "His blood shouldn't be wasted." 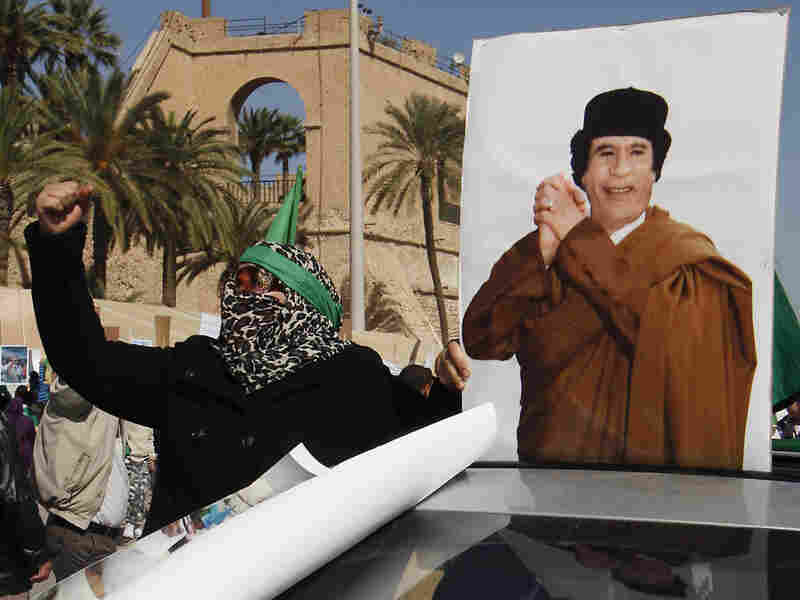 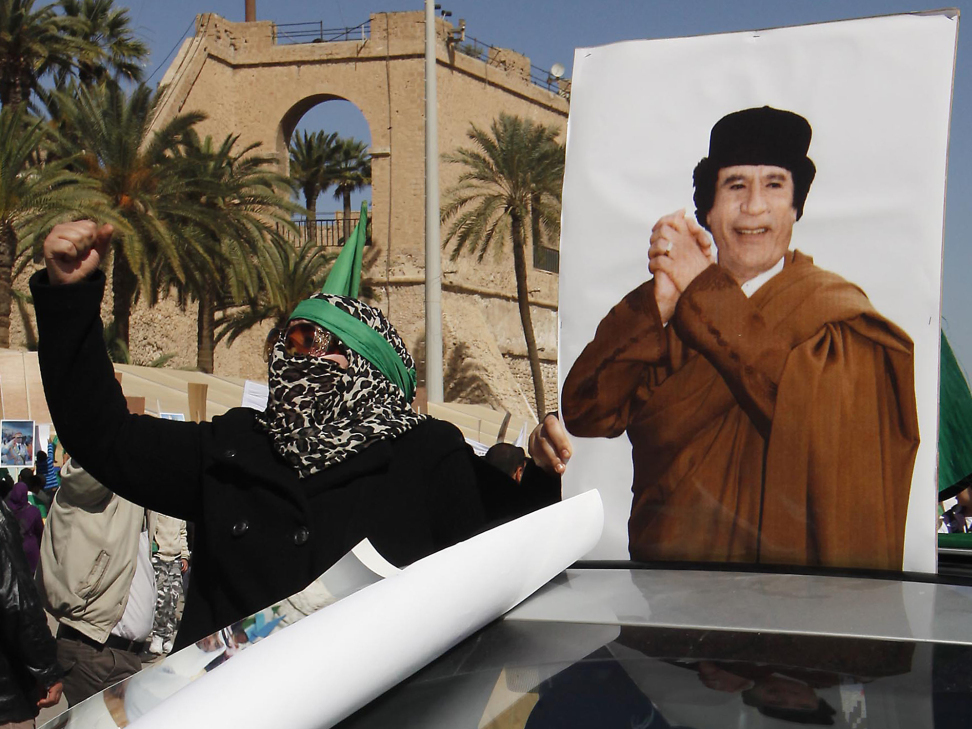 A supporter of Libyan leader Moammar Gadhafi took part in a pro-government rally Thursday in Tripoli.

Monday's bloodshed brought embarrassing rebukes from allies such as Britain and the United States. A statement from Bahrain's Interior Ministry said suspects have been "placed in custody" in connection with the two deaths but gave no further details.

Libyan protesters seeking the ouster of the country's longtime leader, Col. Moammar Gadhafi, defied a government crackdown and took to the streets in four cities Thursday for what organizers called a "day of rage."

At least 14 people have died since the uprising began, according to Switzerland-based Libyan activist Fathi al-Warfali.

Al-Warfali, head of the Libyan Committee for Truth and Justice, said 11 protesters were killed and scores wounded in the town of Beyida on Wednesday, while two people died in Zentana and one protester was killed in Rijban on Thursday.

"Today the Libyans broke the barrier of fear; it is a new dawn," said Faiz Jibril, an opposition leader in exile.

The government has moved quickly to try to stop the protests, proposing to double the salaries of government employees and releasing 110 suspected Islamic militants who oppose Gadhafi — tactics similar to those that Egypt's ousted regime tried with little or no success.

In Yemen, security forces clashed with anti-government protesters for a seventh consecutive day of demonstrations calling for the ouster of President Ali Abdullah Saleh, a key U.S. ally.

Witnesses say government supporters wielding batons and daggers also fought with protesters who were trying to move to downtown squares in Sanaa, the capital. Violence was reported in several other towns, including the port city of Aden.

The demonstration in Sulaimaniyah, 160 miles northeast of Baghdad, involved hundreds of Kurdish protesters. Although Kurds generally enjoy a higher standard of living than many other Iraqis, many are tired of the tight grip with which the ruling parties have controlled their semi-autonomous region.

The protest follows others in recent days in the southern cities of Kut, Nasir and Basra staged by Iraqis angered over a lack of basic services such as electricity and clean drinking water.

With reporting from NPR's Peter Kenyon in Manama and Michele Kelemen in Washington. Material from The Associated Press was used in this story.