Accessibility links
Wisconsin Democrats Flee State To Prevent Vote On Union Bill As an ever-growing throng of protesters filled the state Capitol for a third day, 14 Democratic senators left the state. The lawmakers want to avoid giving the GOP majority in the state Senate the quorum it needs to vote on a bill that would eliminate collective bargaining rights for state workers. 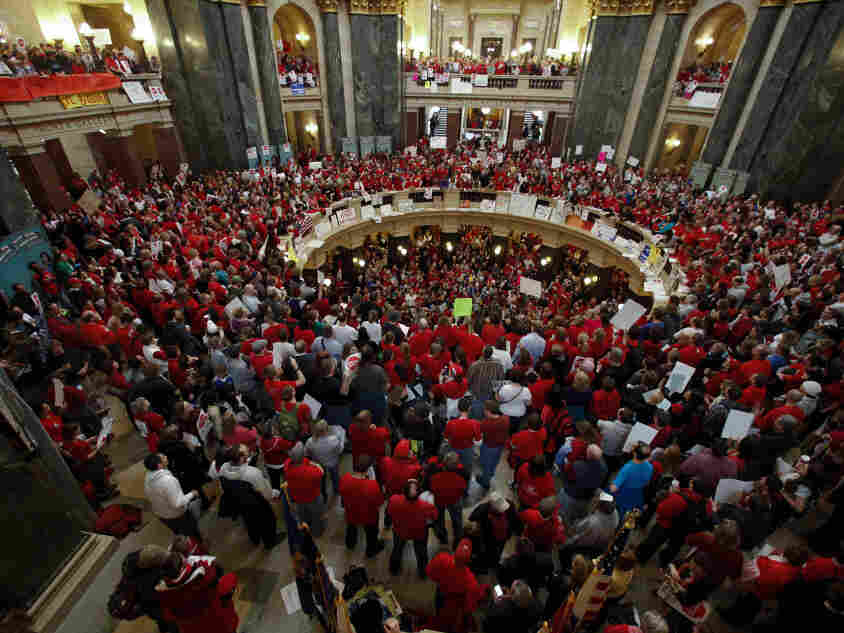 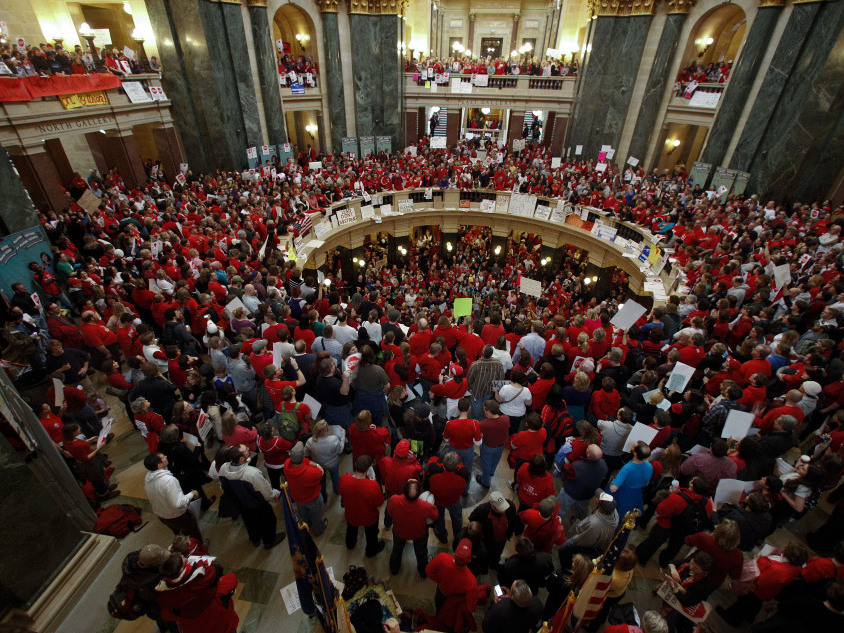 A group of Democratic lawmakers in Wisconsin blocked passage of a sweeping anti-union bill Thursday by ignoring orders to attend a vote. Instead, they left the state to force Republicans to negotiate over the proposal.

As ever-growing throngs of protesters filled the Capitol for a third day, the 14 Democrats disappeared from the grounds. They were not in their offices, and aides said they did not know where any of them had gone. A state police search is under way.

Hours later, one Democrat told The Associated Press that the group had left Wisconsin.

Sen. Jon Erpenbach said Democrats fled to delay consideration of the bill in the hopes that Republican Gov. Scott Walker and Republican lawmakers would discuss changes.

"The plan is to try and slow this down, because it's an extreme piece of legislation that's tearing this state apart," Erpenbach told AP in a telephone interview.

He refused to say where he was. Other Democratic lawmakers sent messages over Twitter and issued written statements, but did not say where they were.

Walker, who took office last month, has made the bill a top priority. He urged the group to return and called the boycott a "stunt."

"It's more about theatrics than anything else," Walker said, predicting that the group would come back in a day or two, after realizing "they're elected to do a job."

Walker said Democrats could still offer amendments to change the bill, but he vowed not to concede on his plan to end most collective bargaining rights.

Republicans hold a 19-14 majority in the state Senate, but they need at least one Democrat to be present before taking a vote on the bill.

Republican Sen. Glenn Grothman called it an extreme move, both by his Democratic colleagues and the teachers supporting them.

As Republicans tried to begin Senate business Thursday, observers in the gallery screamed "Freedom! Democracy! Unions!" Opponents of the bill cheered when a legislative leader announced that there were not enough senators present to proceed.

The proposal marks a dramatic shift for Wisconsin, which passed a comprehensive collective bargaining law in 1959 and was the birthplace of the national union representing all nonfederal public employees.

In addition to eliminating collective bargaining rights, the legislation also would make public workers pay half the costs of their pensions and at least 12.6 percent of their health care coverage, increases Walker calls "modest" compared with those in the private sector.

Students marched from campus toward the Capitol, where they joined the throngs of other demonstrators from around the state. Police blocked off side streets for the six-block procession.

Maxwell Love, a sophomore at the University of Wisconsin in Madison, says that no matter what happens in the Legislature, the protest has been a success.

"We had elementary, we had middle school and high school showing solidarity and learning about the civic engagement process," he said. "You know, I learned so much spending this much time at the Capitol. I can't imagine how this is affecting our young generation."

Wisconsin Public Radio's Shawn Johnson and Teresa Shipley contributed to this report, which includes material from The Associates Press