Accessibility links
More Blood In Bahrain As Troops Open Fire On Protesters Soldiers targeted mourners who were part of a funeral procession moving toward a central square in the capital, which was the scene of a bloody crackdown the day before. Protesters at Friday prayers chanted against the king as recent violence has shifted public anger toward the nation's highest authorities.

More Blood In Bahrain As Troops Fire On Protesters

More Blood In Bahrain As Troops Fire On Protesters 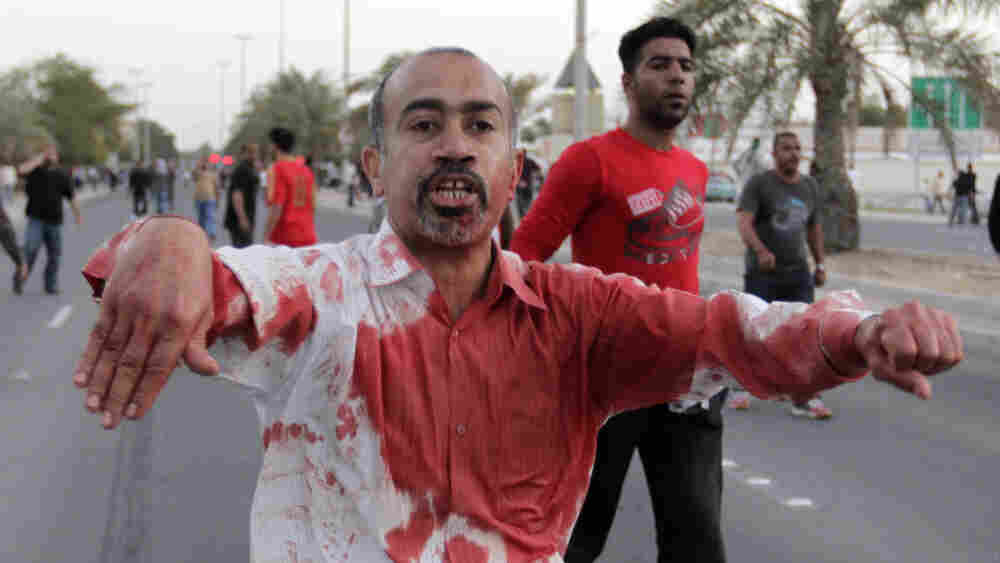 A Bahraini man is soaked in blood from helping an anti-government protester injured Friday in Manama. Troops attacked people who defied a government ban and streamed toward a downtown square that has been the symbolic center of the uprising. AP hide caption 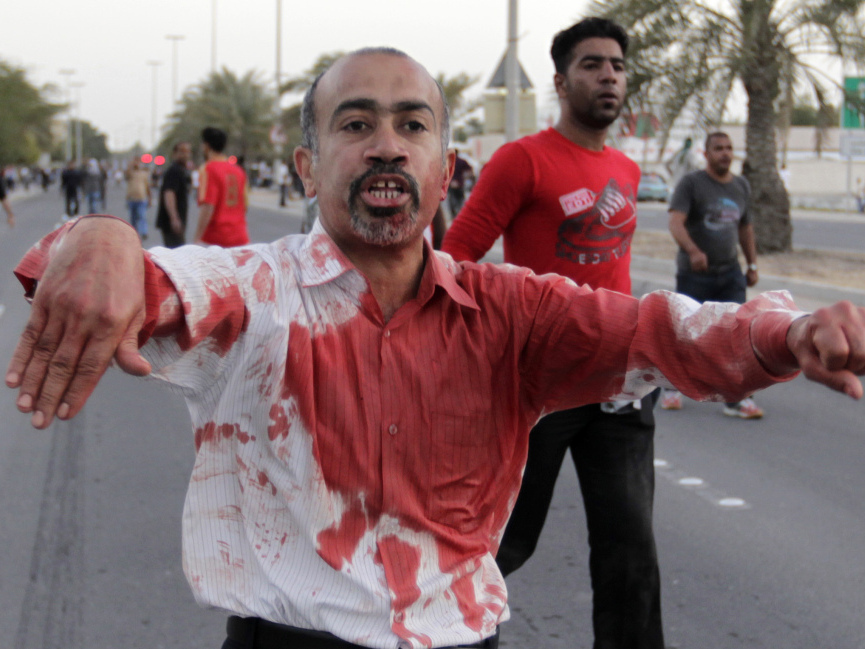 A Bahraini man is soaked in blood from helping an anti-government protester injured Friday in Manama. Troops attacked people who defied a government ban and streamed toward a downtown square that has been the symbolic center of the uprising.

Bahraini soldiers fired automatic weapons and lobbed tear gas at mourners in a funeral procession Friday who defied a ban on gatherings and marched toward a central square in the capital that was the scene of a bloody crackdown the day before.

Dozens Wounded In Clashes In Bahrain

NPR's Peter Kenyon, who accompanied the procession in Manama, said the crowd from the funeral seemed to be making its way to Salmaniya Medical Complex, the main hospital, when they took a left turn into Pearl Square.

"As they got close, as the front edge of this very long line of marchers got close, the sound of shots erupted — scattering everybody," Kenyon said.

He added: "I talked to one paramedic who said he carried a dead young boy who'd been shot in the forehead back to the hospital. A second one said he had carried someone who had also been shot in a critical area and was not expected to survive."

Hospital officials said at least 50 people were injured, some with gunshot wounds. Ambulance sirens were heard throughout central Manama a day after riot police swept through the encampment in Pearl Square, killing at least five people and wounding more than 200.

"This is a war," said Dr. Bassem Deif, an orthopedic surgeon examining people with bullet-shattered bones.

The mourners in Manama carried pictures of those killed in Thursday's pre-dawn attack on Pearl Square, where thousands had gathered to demand political reforms. Anti-riot police fired tear gas and shotguns and swung clubs to clear out the makeshift encampment full of sleeping people. 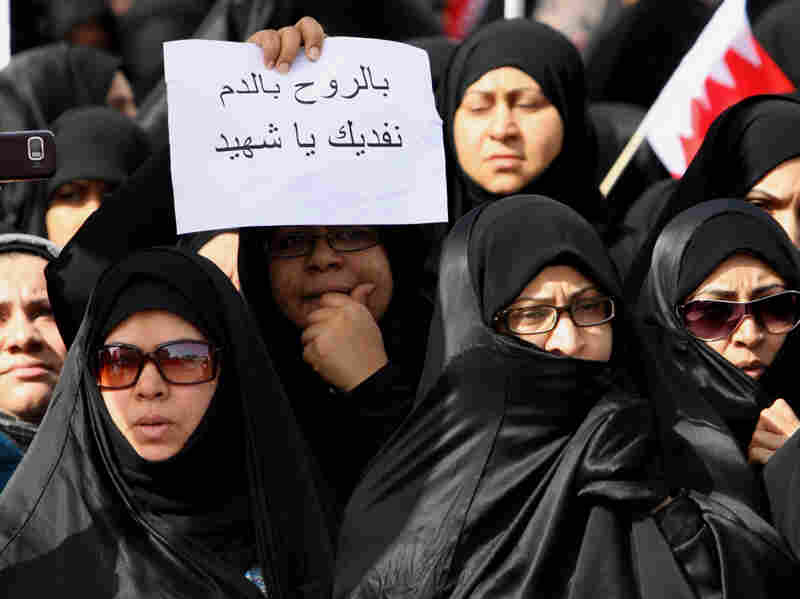 A Bahraini Shiite woman holds a sign with the words "We sacrifice our souls and blood for martyrs" written in Arabic during a funeral for men killed the day before during a violent police raid in Manama. AFP/Getty Images hide caption 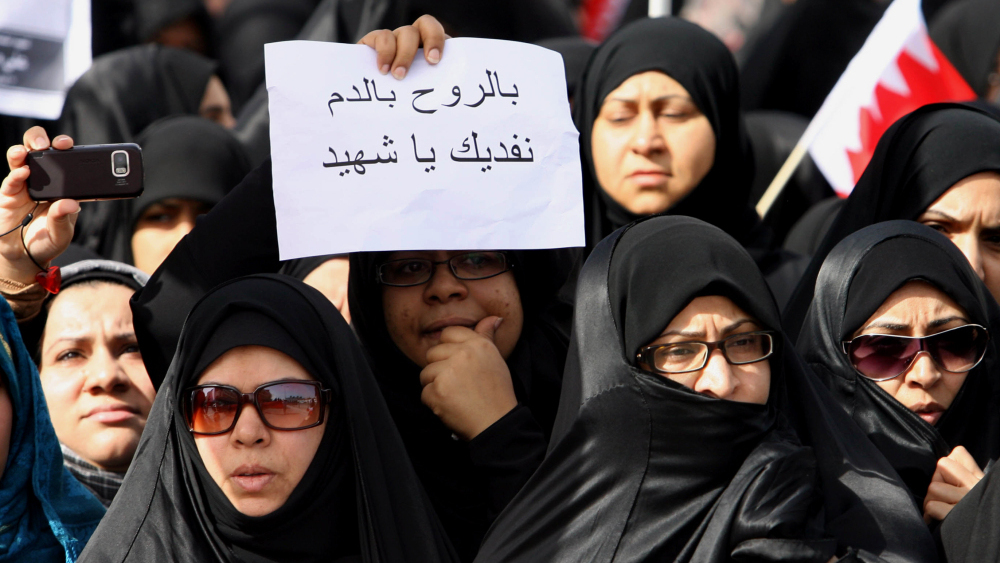 A Bahraini Shiite woman holds a sign with the words "We sacrifice our souls and blood for martyrs" written in Arabic during a funeral for men killed the day before during a violent police raid in Manama.

In an official statement, King Hamad bin Isa Al-Khalifa said he had asked the crown prince to start begin talks "with all parties" to end the crisis.

Sheikh Salman bin Hamad Al-Khalifa had been given "all powers to fulfill the hopes and aspirations" of the Bahraini people, the statement read.

Earlier, the crown prince appeared on state TV to call for calm. "Today is the time to sit down and hold a dialogue, not to fight," he said.

In the U.S., President Obama said he was "deeply concerned" about the reports coming out of Bahrain, as well as reports of violence in Libya and Yemen. The White House said Obama spoke with Bahrain's king by phone Friday evening and urged him to show restraint. Obama condemned the violence and said Bahrain must respect the "universal rights" of its people and embrace "meaningful reform."

Before the violence, protesters in Bahrain were calling for greater public freedoms and political reforms but stopped short of demanding the removal of the king. Since Thursday's bloodshed, however, the mood appears to have shifted toward defiance of the entire ruling monarchy in Shiite-dominated, Sunni-ruled Bahrain. 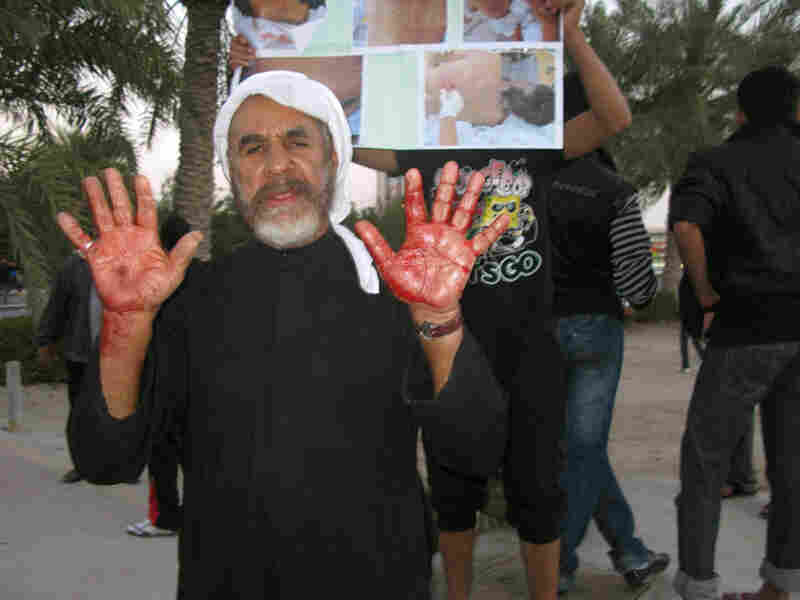 A man named Ahmed shows his blood-smeared hands after Bahraini troops opened fire on demonstrators in Manama. He said he had tried to help a boy who was shot in the head. Peter Kenyon/NPR hide caption 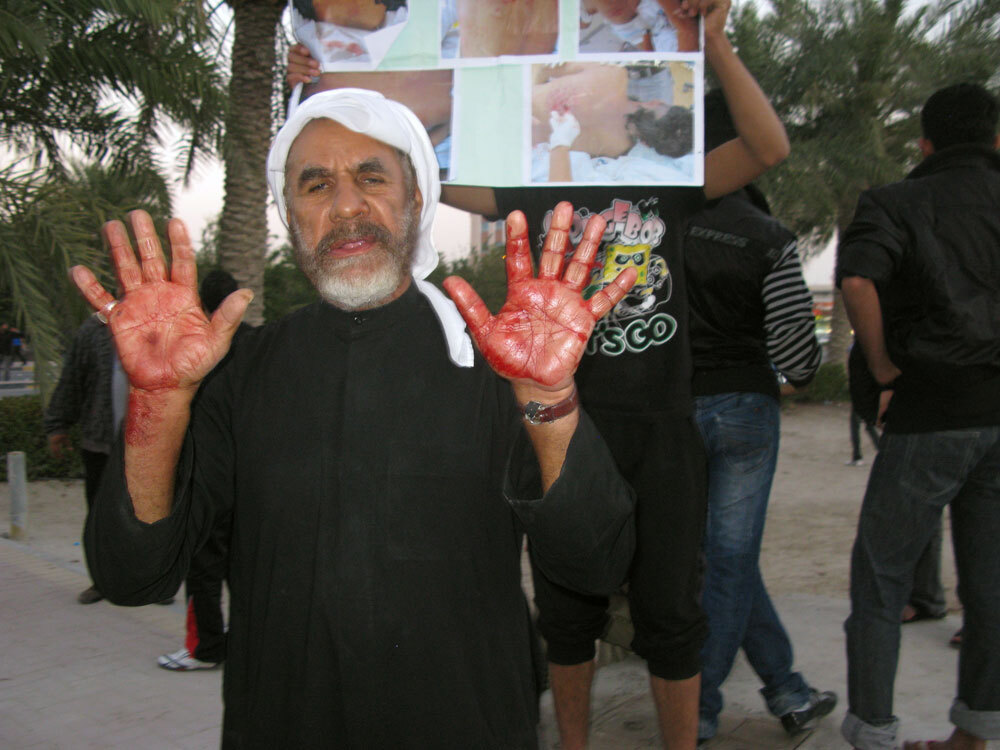 A man named Ahmed shows his blood-smeared hands after Bahraini troops opened fire on demonstrators in Manama. He said he had tried to help a boy who was shot in the head.

"The regime has broken something inside of me. ... All of these people gathered today have had something broken in them," Ahmed Makki Abu Taki said at the funeral for his 23-year-old brother, Mahmoud, who was killed in Pearl Square on Thursday.

At a Shiite mosque in the village of Diraz, an anti-government hotbed, imam Isa Qassim called the Pearl Square assault a "massacre," and thousands of worshippers chanted, "The regime must go."

Government loyalists filled Manama's Grand Mosque to hear words of support for the monarchy and take part in a post-sermon march protected by security forces. Many arrived with Bahraini flags draped over the traditional white robes worn by men. Portraits of the king were handed out.

"We must protect our country," said Adnan al-Qattan, the cleric leading prayers. "We are living in dangerous times."

In further evidence that the pro-government rally was officially sanctioned, Kenyon said people could be seen "getting water from large tanker trucks bearing the logo of the Interior Ministry."

The pro-government gathering drew many nonnative Bahrainis, including South Asians and Sunni Arabs from around the region. Shiites have long complained of policies that give Sunnis priority in citizenship and jobs, including posts in security forces, to offset the Shiite majority.

Outside a Shiite village mosque, several thousand mourners gathered to bury three of the men killed Thursday. The first body, covered in black velvet, was passed hand to hand toward a grave as it was being dug.

A Friday Of Victory In Egypt

Tens of thousands of people jammed Cairo's Tahrir Square to mark one week since a popular revolt drove longtime President Hosni Mubarak from power after three decades of autocratic rule.

The groups that sparked Egypt's 18-day revolt called the massive gathering a "Friday of Victory and Continuation," reflecting both their pride in forcing a change in national leadership and concerns about the future.

People flooded the square ahead of Friday prayers even though a main access road was blocked by an army jeep and a barricade, and those entering on foot had to present identification to soldiers.

"We came here because we are excited about Egypt and the revolution," said 48-year-old Ashraf Abdel-Azim, who made his way to the square with his wife, Nadwa, and their 9-year-old son, Ahmed. "We want freedom and change, so we are happy to see it coming."

NPR's Lourdes Garcia-Navarro, reporting from Cairo, said the demonstration is "clearly a sign to the military that the protesters are still here, that the people of Egypt are watching very closely what happens."

She said some people are skeptical that the military will follow though on its promises of reform, saying the generals' intentions have yet to be made clear and that the military has yet to meet with senior members of the opposition.

As Egypt struggles to recover from the economic paralysis that accompanied the anti-Mubarak protests, many labor strikes that began during the days of protest have continued.

In a statement read on Egypt's official television channel Friday, the ruling military council said the strikes were harming the country and warned that they would not be allowed to continue.

Ominous Warning To Demonstrators In Libya

Moammar Gadhafi's regime in Libya deployed security forces throughout the restive country and bluntly warned citizens Friday against joining the unrest in which dozens of protesters have been killed.

Protests have erupted in several cities in Libya this week, especially in the east, and the U.S.-based Human Rights Watch said Friday that 24 people were killed in unrest Wednesday and Thursday.

But in an apparent effort to project an image of stability, Gadhafi's open-roofed car slowly made its way through the streets of the capital Tripoli late Thursday. In footage broadcast by Libyan TV, the motorcade was thronged by cheering supporters. Some pushed toward the car to try to reach Gadhafi and shake hands. "We do not want any other leader but Gadhafi!" one woman shouted.

Meanwhile, in the eastern city of Benghazi, hundreds of protesters camped out Friday in the center of the city. Calls to join funeral processions for those killed in clashes with pro-government forces spread on Facebook and websites.

One of the protesters, Nizar Jebail, who owns an advertising company, said he spent the night in front of the city's court building. He said he wants not just reforms, "but freedom and equality."

In the Yemeni capital, Sanaa, thousands of people demonstrated Friday calling for the ouster of President Ali Abdullah Saleh. They clashed with government loyalists and anti-riot police, who fired tear gas and shots in the air to disperse the crowd on what organizers called a nationwide "Friday of Rage."

In the city of Taiz, what appeared to be a hand grenade was thrown at a group of protesters, wounding at least 48 people in the blast and the stampede that followed, witnesses said.

Saleh, who has close ties to the United States, has ruled for 32 years.

Jordan's capital city also erupted in violence between supporters and opponents of the government.

Loyalists used sticks and stones to attack a group of about 2,000 anti-government protesters in Amman before police intervened to restore order. Police said four people were wounded, but rally organizers put the number at eight.

Friday's demonstrations marked the seventh consecutive day of protests calling for the popular election of the prime minister and Cabinet officials. Past protests were peaceful.

Jordanian government spokesman Taher Edwan condemned the attack and said authorities were investigating to see who was behind the incident. He said the attackers violated the citizens' rights to free speech and assembly.

With reporting from NPR's Peter Kenyon in Manama, Bahrain, and Lourdes Garcia-Navarro in Cairo, and from Dale Gavlak in Amman, Jordan. This report also contains material from The Associated Press.