Accessibility links
The Nation: How Wisconsin Unions Will Win More protests broke out this week, but this time the rallying was in Madison, Wisconsin. The unrest was sparked by Gov. Scott Walker's budget proposal, which would limit the bargaining rights of government unions. John Nichols of The Nation argues that the Constitution plays the most important role in helping the people of Wisconsin win their fight.

The Nation: How Wisconsin Unions Will Win

The Nation: How Wisconsin Unions Will Win 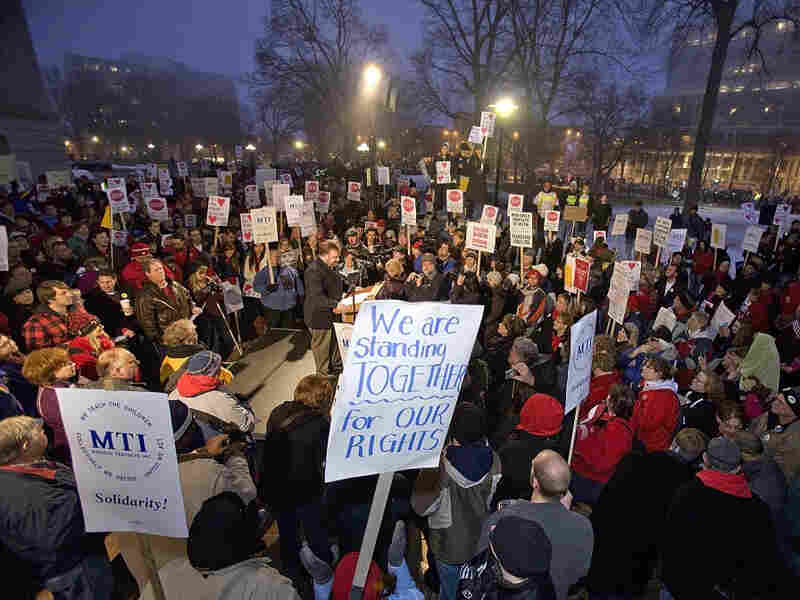 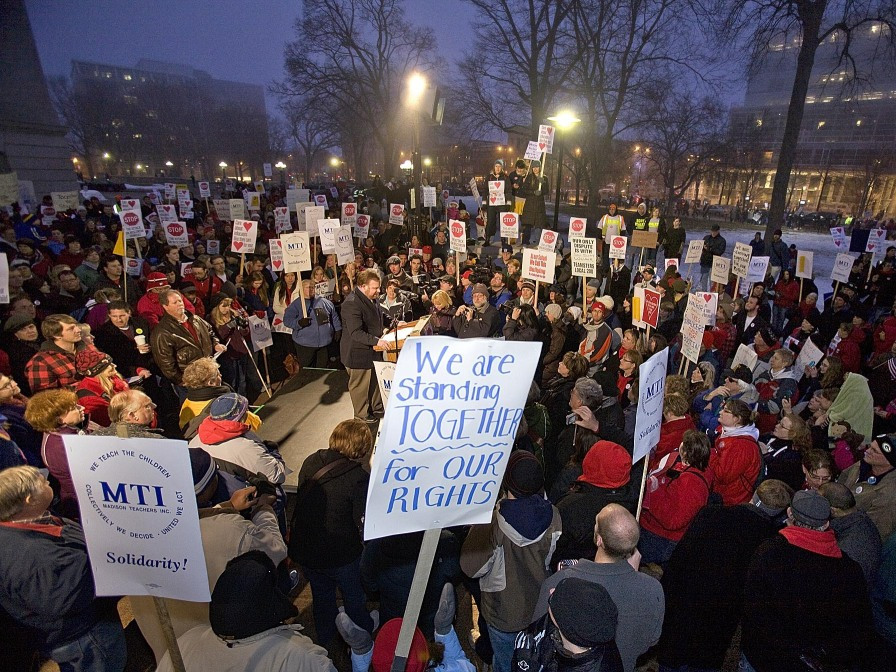 Protesters fill the courtyard and steps outside the State Capitol building on in Madison, Wisconsin to demonstrate against Wisconsin Gov. Scott Walker's proposal to eliminate collective bargaining rights for many state workers.

David Vines, a University of Wisconsin student joined the mass protests against Governor Scott Walker's attempt to strip public employee unions of their collective bargaining rights on Monday. The political science student marched on Tuesday, Wednesday and Thursday. He slept overnight in the Capital to make sure that the legislature did not approve Walker's plan without a fight.

Why? "This is what the founders intended," says Vines.

And he is right.

When Democratic members of the Wisconsin State Senate walked out on Capital on Thursday — denying the Republican majority quorum that was necessary to pass the legislation — they were attacked by Walker and his cronies. The governor called the boycott a "stunt" and claimed the Democrats were disrespecting democracy.

After all, Walker's backers noted, the governor and his Republican allies won an election last November.

But Wisconsin's greatest governor, Robert M. La Follette, declared: ""We have long rested comfortably in this country upon the assumption that because our form of government was democratic, it was therefore automatically producing democratic results. Now, there is nothing mysteriously potent about the forms and names of democratic institutions that should make them self-operative. Tyranny and oppression are just as possible under democratic forms as under any other. We are slow to realize that democracy is a life; and involves continual struggle. It is only as those of every generation who love democracy resist with all their might the encroachments of its enemies that the ideals of representative government can even be nearly approximated."

La Follette's point, apparently lost on Walker, is that democracy does not end on Election Day. That's when it begins. Citizens do not elect officials to rule them from one election to the next. Citizens elect officials to represent them, to respond to the will of the people as it evolves.

While conservative zealots talk about "2nd amendment remedies" for the challenges faced by civil society, the Wisconsinites who took to the streets to protest an assault on labor rights opted for another amendment to the founding document that the right tries so very hard to claim as the property of a single ideology.

The sign that David Vines carried as he marched Thursday declared for: "First Amendment Remedies!"

Why did he mean? Read the First Amendment: "Congress shall make no law respecting an establishment of religion, or prohibiting the free exercise thereof; or abridging the freedom of speech, or of the press; or the right of the people peaceably to assemble, and to petition the Government for a redress of grievances."

The founders, fresh from a revolution against an imperial monarch and his crown corporations did not outline a right of the people peaceably to assemble so that folks could get together to attend a baseball game — or even to see the Green Bay Packers win a Super Bowl.

The founders did not guarantee a right to petition the Government for a redress of grievances so that Americans could gripe about the cold in winter.

The purpose of the First Amendment, the essential amendment for those who believe in a real and robust democracy experiment, was to detail the rights of citizens to object when wrongheaded and dangerous policies are proposed by their elected officials.

That is what happened in Wisconsin this week.

State senators, the elected representatives of the people looked out the windows of the state Capital and saw tens of thousands of their constituents assembling peaceably to petition for the redress of grievances. "Tens of thousands of Wisconsinites were demanding to be heard," explained state Senator Mark Miller, the Democratic minority leader in the chamber. "We hear them."

At the rally Thursday night where those tens of thousands of Wisconsinites celebrated the walk out by the Democratic senators, the chanted: "This is what democracy looks like."

And David Vines is right.

Wisconsinites are employing "First Amendment Remedies." And it is working, just as the founders intended.