Accessibility links
Runaway Wisconsin Democrats Cheered On By Protesters The state's 14 Democratic senators fled in an attempt to stall a vote on the Republican governor's plan to end collective bargaining rights for public workers. One of the lawmakers said they were prepared to be away for weeks. Demonstrators camped out at the Capitol called the tactic "brilliant." 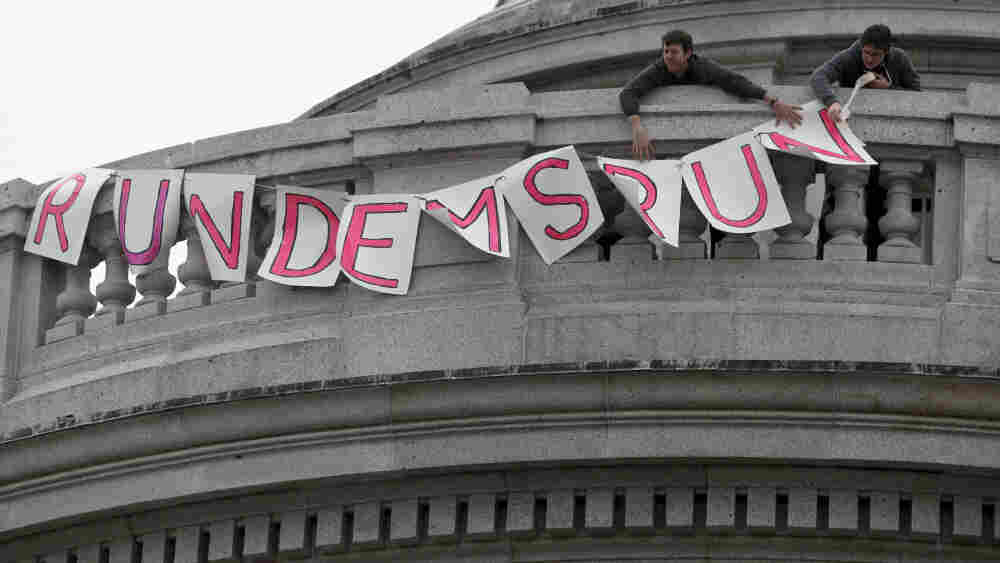 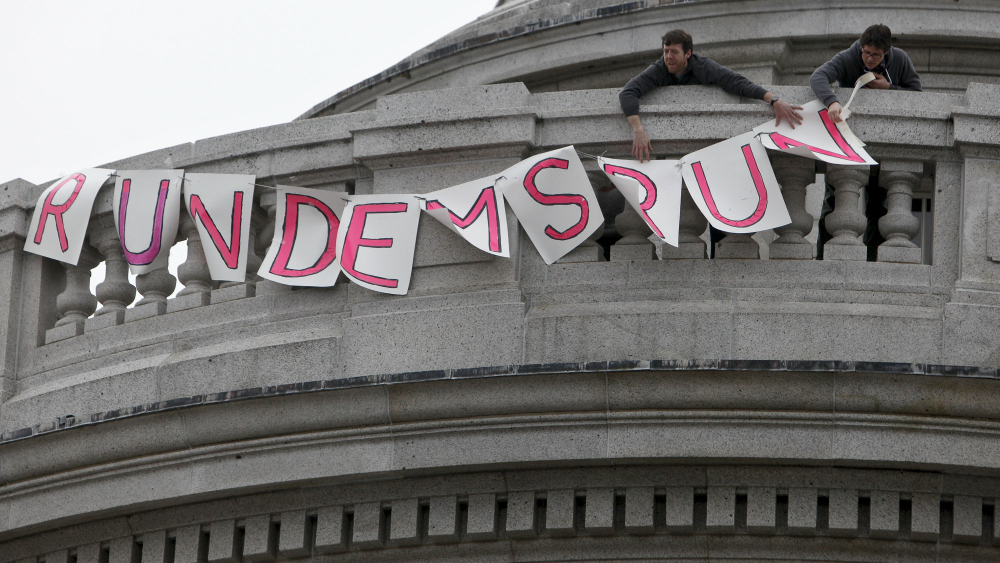 Two protesters put up a sign at Wisconsin's state Capitol building in Madison egging on the 14 Democratic state senators who fled Thursday.

Republicans in Wisconsin's Senate asked the governor on Friday to send state troopers after the leader of 14 Democrats who vanished to stall GOP efforts to strip some public workers of their collective bargaining rights.

The runaway lawmakers fled Thursday — to the delight of tens of thousands of protesters who have descended on the state Capitol — ahead of a Senate vote on Republican Gov. Scott Walker's proposal to end collective bargaining for state, county and local workers. The plan exempts police, firefighters and the State Patrol. Democrats were keeping their whereabouts secret but later emerged to give interviews. 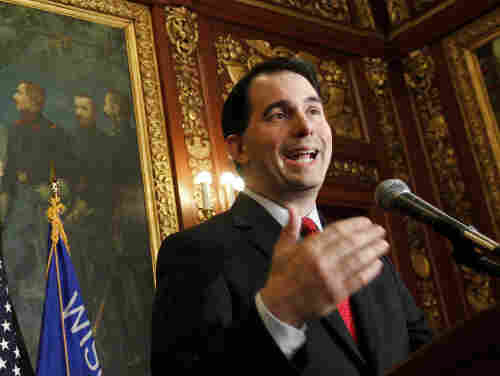 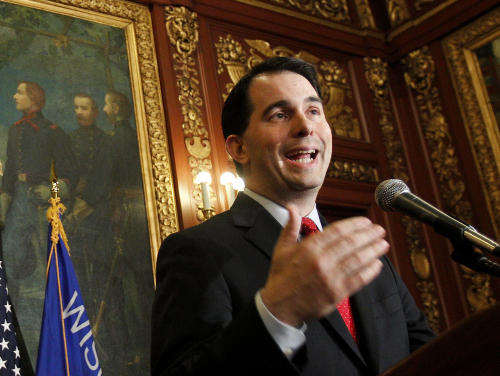 Sen. Jon Erpenbach, who was among those who fled, said Friday that the group was prepared to be away for weeks, although he would like the standoff to end as soon as possible.

"That really, truly is up to the governor," he told The Associated Press in an interview Friday at a downtown Chicago hotel. "It's his responsibility to bring the state together. The state is not unified."

Senate Majority Leader Scott Fitzgerald said he asked Walker to send two state troopers to Democratic leader Mark Miller's home in the town of Monona. Fitzgerald said he just wanted to send a message to Miller that he must bring his caucus back to Madison.

Miller, reached by cell phone, said he wasn't worried. "I'm not there," he said.

Senate Sergeant-At-Arms Ted Blazel said troopers knocked on Miller's door and rang his doorbell, but no one answered.

We simply think that if God took seven days to create heaven and Earth, then maybe we can take a little bit more time as well.

Wisconsin's Constitution says absent members can be compelled to appear but doesn't say how. It also bars police from arresting legislators while they're in session.

All 14 lawmakers planned to meet somewhere near Chicago to discuss their options, said Erpenbach, who said he had not spoken to any Republican lawmakers since leaving.

Until at least one of the Democrats comes back to the Capitol, the governor's controversial plan remains stalled. Republicans hold 19 Senate seats but are one vote short of the 20 votes necessary to conduct business. The anti-union measure needs 17 votes to pass.

A clearly frustrated Walker said the Democrats should return to Madison and face the vote.

"The state senators who are hiding out down in Illinois should show up for work, have their say, have their vote, add their amendments," Walker told CBS' The Early Show on Friday. "But in the end, we've got a $3.6 billion budget deficit we've got to balance."

Tens of thousands of protesters have massed at the state Capitol to protest the bill that President Obama has compared to "an assault on unions."

Students, teachers and prison guards have turned out this week to vent their anger, standing shoulder to shoulder in the building's hallways, sitting cross-legged across the floor and making it difficult to move from room to room. A number of people brought along sleeping bags and stayed through the night. Some school districts were forced to cancel classes after hundreds of teachers called in sick to join the protests.

Although Walker called the Democrats' flight a stunt, many protesters at the Capitol saw it differently. School guidance counselor Saunnie Yelton-Stanley called their disappearance "brilliant."

"The fact that the Democrats have walked out, it shows they're listening to us," said Neil Graupner, a 19-year-old technical college student from Madison, as he prepared to spend the night at the Capitol on Thursday. 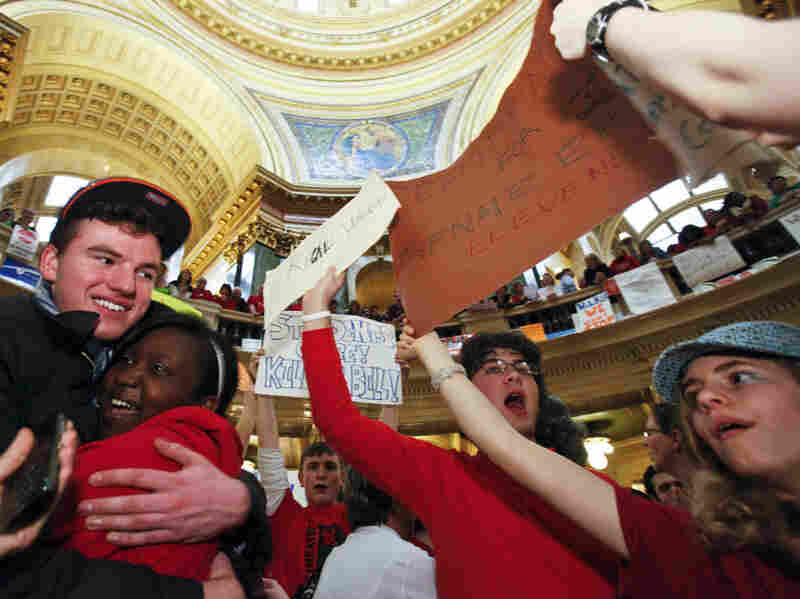 Demonstrators chanting "Kill the Bill!'' packed the Capitol rotunda in a show of force over the anti-union bill. Andy Manis/AP hide caption 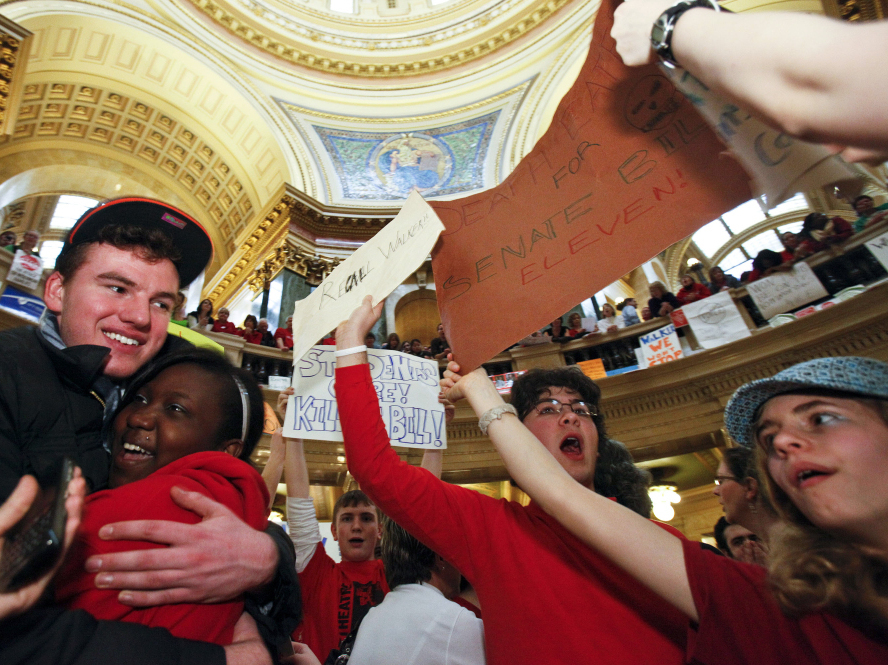 Demonstrators chanting "Kill the Bill!'' packed the Capitol rotunda in a show of force over the anti-union bill.

In a sign that the commotion might be causing other problems for the governor, he pushed back releasing his two-year budget plan by one week to March 1.

Walker will still deliver a speech to lawmakers about the budget as planned on Tuesday, but won't release his actual bill until the following week. A spokesman did not immediately return messages seeking comment.

The governor insists the concessions he is seeking from public workers — including higher health insurance and pension contributions — are necessary to deal with the state's projected $3.6 billion budget shortfall and to avoid layoffs.

Republican leaders said they expected Wisconsin residents would be pleased with the savings the bill would achieve — $30 million by July 1 and $300 million over the next two years.

The proposal marks a dramatic shift for Wisconsin, which passed a comprehensive collective bargaining law in 1959 and was the birthplace of the national union representing all nonfederal public employees.

Shawn Johnson of Wisconsin Public Radio contributed to this report, which includes material from The Associated Press.