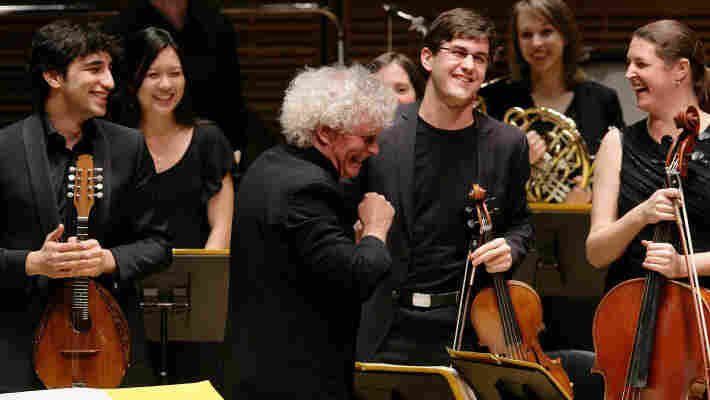 The Ensemble ACJW, conducted by Sir Simon Rattle (center), features musicians from the Academy, sponsored by Carnegie Hall and the Juilliard School. The violist to the right of Rattle is Nathan Schram. Jennifer Taylor/Getty Images hide caption 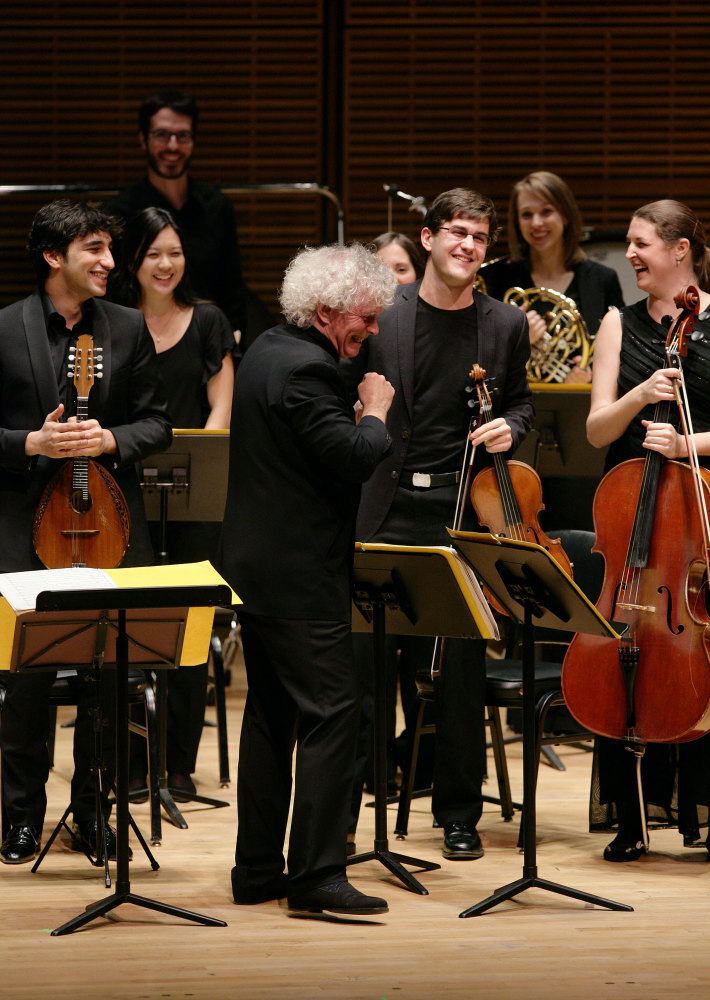 The Ensemble ACJW, conducted by Sir Simon Rattle (center), features musicians from the Academy, sponsored by Carnegie Hall and the Juilliard School. The violist to the right of Rattle is Nathan Schram.

A few months ago, Nathan Schram, a 23-year-old viola player, was teaching violin to elementary school kids in inner-city Brooklyn. He's a member of the Academy, a training program for young musicians, sponsored by Carnegie Hall and the Juilliard School. Now he's preparing for another facet of what the Academy has to offer.

Clive Gillinson, Carnegie Hall's executive director, says the Academy is trying to develop a well-rounded 21st century musician. When people apply, his staff looks for two things: a genuine commitment to sharing a passion for classical music and, well, an ability to play.

"First and foremost, they've got to be the best players," Gillinson says. "If these were not players of the highest standard, we wouldn't put them in an ensemble conducted by Simon Rattle."

That's Sir Simon Rattle, conductor of the Berlin Philharmonic, by the way.

"When I talked to Simon Rattle about him doing this, you could talk quite openly about the fact that, you know, these guys play at Carnegie Hall," Gillinson says. "They get phenomenal reviews in The New York Times and lots of other places. I mean, they are fantastic players at the highest level. You will love it."

Last December, Rattle came to New York City and spent a week rehearsing with the Ensemble ACJW — the Academy's performing group — for a concert to be presented at Zankel Hall, one of Carnegie's three auditoriums. Rattle had put together a program of breadth and intensity, from the baroque to the contemporary, including Richard Strauss' hyper-romantic Metamorphosen.

Violist Schram, who's only about a year and a half out of Indiana University, says he was both challenged and excited by the different styles.

"I think, in a way, it's really highlighting some of the things the Academy does — we try to do everything," Schram says. "If you want to be in the profession, you kind of have to be able to do everything at least pretty well, if not excellently."

Sir Simon Rattle didn't just stand in front of the ensemble. He moved among them, coaxing and cajoling the young players. And, while the musicians played with precision and clarity at the beginning of rehearsal, by the end of the three hours, Rattle had helped them click into a higher gear, with greater emotion.

"They are wonderful players," Rattle says. "They are at the very highest level, but they're still extremely open. And there's still a lot to learn and a lot to take."

A few days later, the group got a standing ovation after the concert. Schram says he was giddy.

"This is, for me, easily the best ensemble work or concert I've ever done," Schram says. "I mean, it was just really spectacular. Everyone was at such a high level; everyone was truly committed. Certainly, as a student, coming from studying last year, you get a lot of people that kind of lag or ... you know, they're not really committed to the music. They just want to do it. They want to go practice their solo stuff. And here, everyone knows that this is the real thing."

It's a couple of months later, and Schram is back at it, this time rehearsing at Carnegie's Weill Recital Hall. It's another concert designed to show off the ensemble's versatility. Beethoven is on the program, but the centerpiece is the New York premiere of composer David Bruce's Steampunk, a new work commissioned by Carnegie for the group. Bruce says that, right about the time he got the commission, a friend told him about a quirky science-fiction genre.

"Steampunk is a kind of an alternative reality of Victorian sci-fi, if you like," Bruce says. "So people often are kind of dressed in Victorian garb, but have these futuristic things, but there's no electricity there. It's all kind of steam-powered. The music I love is classical and folk music. Both don't usually involve electricity. It's usually just the sound of, you know, people scraping bows or puffing on their instruments."

"It's really lively, very accessible, and sometimes, as classical musicians, we're kind of used to [hearing] new music as, like, 'How are we gonna present this to an audience?' When this music came to us, already presentable, we just had to learn it and have fun with it," he says.

In fact, they had so much fun with it, they all dressed up in Victorian costumes, accented with bicycle gears and chains, to the delight of the audience. That kind of communication, whether in the concert hall or in the schools, is what the Academy's all about, Rattle says.

"It makes me very optimistic about the future of music here, when you have these people who also have realized that they have to be evangelists, not high priests," Rattle says. "So they must go out into the community, they must be working with people, they must be in schools, they must give out of themselves, because otherwise, the art form is gonna die."