Accessibility links
Protests Enter Sixth Day In Wisconsin But Gov. Scott Walker reiterated Sunday that he wouldn't compromise on the issue that had mobilized them, a bill that would eliminate most of public employees' collective bargaining rights. 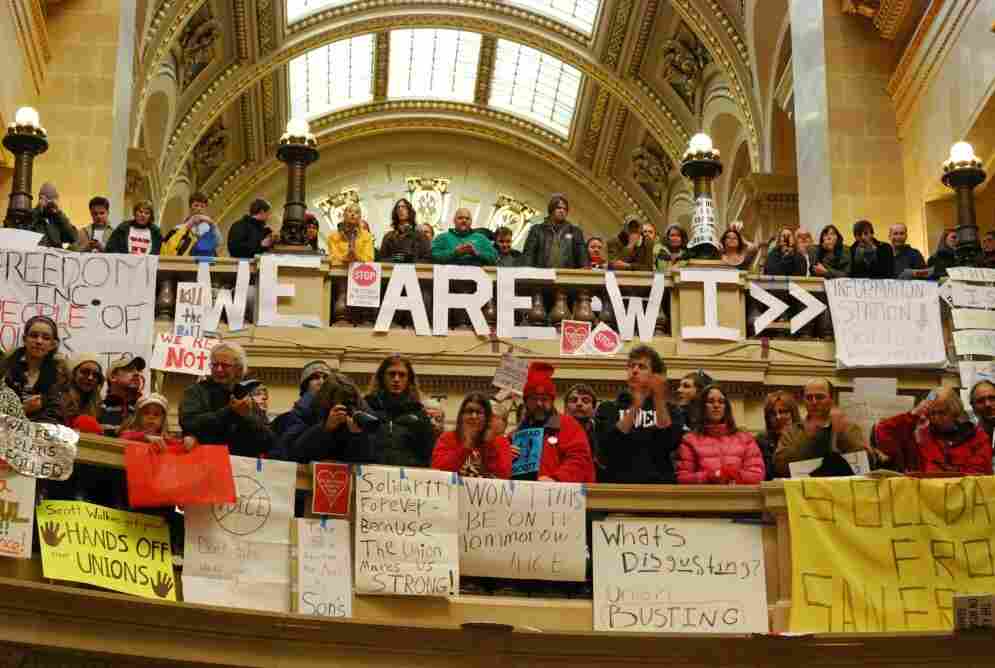 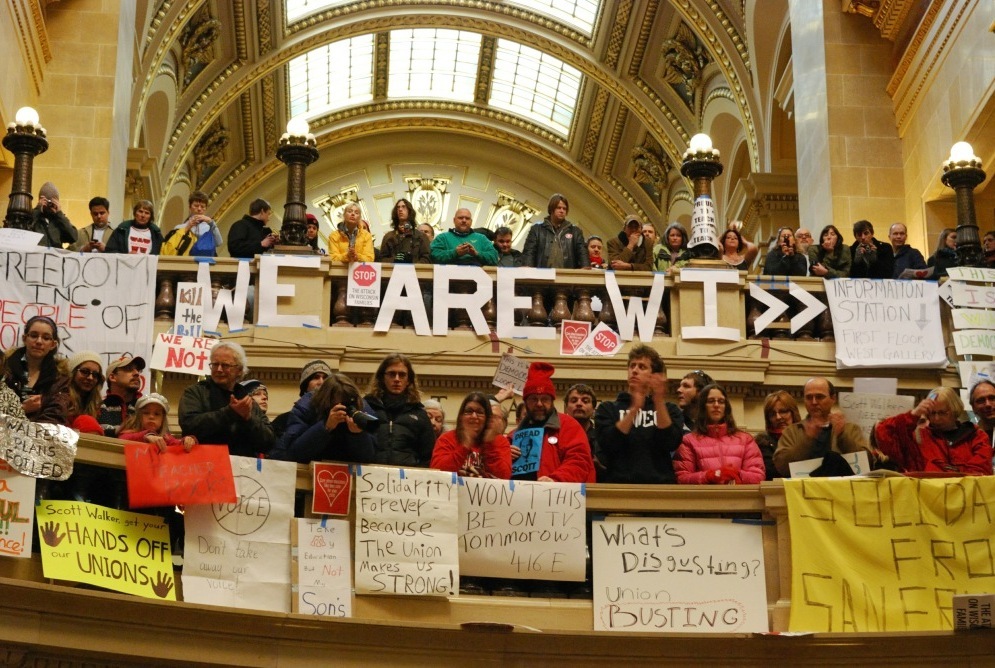 While the legislative process stalls, politics by other means continues in the streets and in the Capitol's hallways.

Rain and snow moved most protesters at the Wisconsin State Capitol indoors Sunday as rallies continued against a plan that would strip public workers of union bargaining rights.

Republican Gov. Scott Walker calls his plan politically bold, but says he's only asking for modest contributions from public workers on health care and pension benefits. Union leaders said this week they were willing to make those concessions to help balance Wisconsin's budget, but state AFL-CIO President Phil Neuenfeldt told a crowd in the Capitol rotunda that taking away bargaining rights is a step too far.

"I was raised to believe that the government is here to protect our rights, not take our rights away," he said.

Sunday marked the sixth straight day of protests at the Wisconsin Capitol, but Walker said he wasn't willing to budge, and he expected the bill to pass as is.

"We're willing to take this as long as it takes because in the end we're doing the right thing," he told Fox News from Madison.

The controversial measure led to massive protests that started Tuesday and have gained steam each day. An estimated 68,000 people turned out Saturday. Most opposed the bill, but the day marked the first time that a significant contingent of Walker supporters showed up to counter-protest.

On Sunday, the demonstrators banged on drums and danced in the Capitol Rotunda while they chanted, "This is what Democracy looks like" and "union busting!"

Jacob Cedillotootalian, a 27-year-old University of Wisconsin-Madison graduate student and teaching assistant, said Sunday was the third night that he slept in the Capitol as part of a union representing teaching assistants and he didn't see an end coming anytime soon. He said he was worried about paying more for his health insurance and tuition, but what kept him protesting was the possibility of losing the union.

"Normalcy would be nice," the English instructor said. "But it seems the governor and the state Republicans are intent on taking these rights away."

The bill would require government workers to contribute more to their health care and pension costs and limit collective bargaining to pay increases less than the Consumer Price Index. Walker says the measure is needed to deal with the state's projected $3.6 billion budget shortfall.

Legislative action on the bill came to a halt Thursday when 14 Democratic state senators fled the state to delay a vote. They remained in hiding Sunday, but Walker told Fox News he thought they would return to work early this week.

"Democracy means you show up and participate and they failed to do that," he said. "They're walking out on their job."

Sen. Jon Erpenbach, D-Middleton, told The Associated Press in a telephone interview Sunday that the senators weren't likely to come back until the governor was willing to compromise.

Erpenbach said he remained at a Chicago hotel and his colleagues were
"scattered" out of state. They had a conference call Saturday night, and Erpenbach said they remained united in their effort to stall the bill.

"It's trying to slow this train down," he said. "It's making sure that obviously everybody in the state knows what we're dealing with here. It's an opportunity for the governor to calm down, take a step back, realize what he's asking for with this legislation and hopefully come to his senses."

Erpenbach said Democrats have reached out to Walker's administration but have not had their phone calls returned. He said it may take a coalition of moderate Republicans in the Senate to try to negotiate an end to the stalemate.

One of them, Sen. Dale Schultz, R-Richland Center, has proposed suspending collective bargaining rights temporarily to get through the state's two-year budget, but then restoring them in 2013. That idea was endorsed Sunday by the Wisconsin State Journal, the state's second largest newspaper.

Erpenbach called Schultz brave for bucking Walker's administration with the proposal. Asked whether Democrats could accept Schultz's plan, Erpenbach said workers should not lose their rights since they have agreed to make concessions by paying more for their health care and pensions.

On Sunday, cornerback Charles Woodson, a member of the NFL Players association, became the latest Green Bay Packer to back the public employees' cause. NFL owners and the players' union are locked in their own fight over a collective bargaining agreement. Along with Woodson, seven other current and former Packers have expressed support for the protesters.

Wisconsin Public Radio's Shawn Johnson contributed to this report, which includes material from The Associated Press