Accessibility links
Tuning In Space Noise For Sounds Of Life The Search for Extraterrestrial Intelligence Institute is listening to some newly discovered planets. While they haven't heard any intelligent life — yet — there's still plenty of other noise to be heard in space. 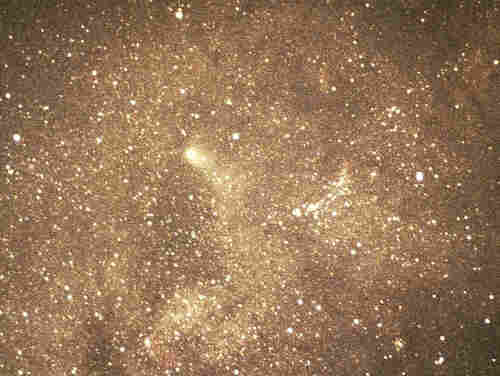 Scientists from NASA's Kepler mission discovered 54 planets in so-called "habitable zones" in the Milky Way. The SETI Institute turned its telescopes toward those planets to listen. AP hide caption 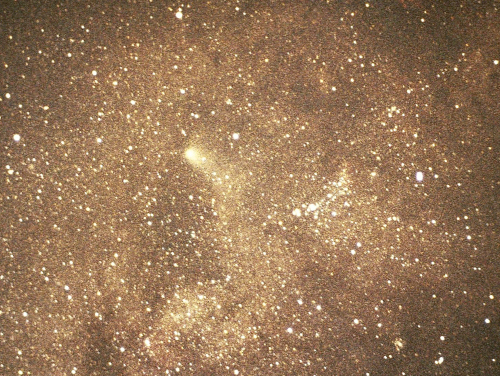 Scientists from NASA's Kepler mission discovered 54 planets in so-called "habitable zones" in the Milky Way. The SETI Institute turned its telescopes toward those planets to listen.

Earlier this month, NASA's Kepler Mission announced it had found 54 planets orbiting stars in so-called "habitable zones" in our galaxy, where the climate could be suitable for liquid water.

After the planets were found, NASA alerted the SETI Institute (Search for Extraterrestrial Intelligence) of their locations. The institute's scientists started listening to those planets, and while they haven't heard any intelligent life yet, there's plenty of other noise to be heard in space.

Few people know more about sounds in space than University of Iowa physics professor Don Gurnett. He's been collecting sounds using instruments on satellites and space explorers for more than 40 years. Here's some of what he's heard.

Jon Jenkins says this star's pulsations are a 107-year-old mystery for scientists.

Here's the sound of the Northern Lights — one of Gurnett's favorites.

And Gurnett even made one of the first discoveries — using instruments aboard Voyager 1 — of lightning on Jupiter.

There's one sound so strange — the sound of an aurora on Saturn — that conspiracy theorists believe it to be alien communication. "I don't endorse that point of view," Gurnett says. "But nonetheless, it's pretty bizarre."

SETI chief Jill Tarter says the Institute is not listening for the kind of sound you hear with your ears.

"What we're doing is using sensors that are sensitive to electromagnetic radiation," she says.

"And then, just the way your radio does, that energy can be used to make audible sound," Tarter says.

Listening To The Light

Jon Jenkins, co-investigator for data analysis for the Kepler Mission, translates that electromagnetic radiation into sound. His actual job as part of the Kepler search is measuring light from specific stars as a way to find nearby planets.

"When I started looking at these light curves," he says, "I thought, 'Well, gosh, what if we played one of these through a sound card and it said, "Hello, Earthlings?" ' "

Unfortunately, Jenkins says, they haven't heard that yet.

"But we have heard a lot of other very interesting things," he says.

Jenkins made one recording by transforming wave energy — light from a star — into sound. He says the star's pulsations are a 107-year-old mystery for scientists.

Jenkins has one possible — and very remote — explanation for the pulsations: "A civilization that is so advanced it could actually modulate the brightness variation of its own star," he says. "And it's not such a crazy idea."

Jenkins says the idea has been suggested in scientific literature as a way for an alien civilization to send cosmic smoke signals across the galaxy.

If scientists at SETI do hear an alien signal, it probably won't sound like Saturn's aurora. That signal is astrophysical, meaning it occurs naturally. The SETI Institute is hunting for a signal that doesn't.

"The reason we look for that," Tarter says, "is that technology can create such signals very inexpensively — and it doesn't seem to be possible for nature to do that naturally."

Like a signal that shows up at only one frequency on the radio dial: Tarter says a signal like that could help answer the question, "Are we alone?"