Accessibility links
Aerobic Exercise May Improve Memory In Seniors The brain's pinkie-sized hippocampus, which helps to archive memories, shrinks naturally as we age. But studies indicate that aerobic activities such as walking not only may help the hippocampus stop shrinking, but might even help it grow.

There's a very small structure deep in the center of our brains called the hippocampus. It's smaller than your pinkie, but it plays an absolutely essential role in learning and memory. The hippocampus encodes new information so that we can recall it later. Without a hippocampus, we would be unable to form new memories; we'd only be able to remember the old ones. 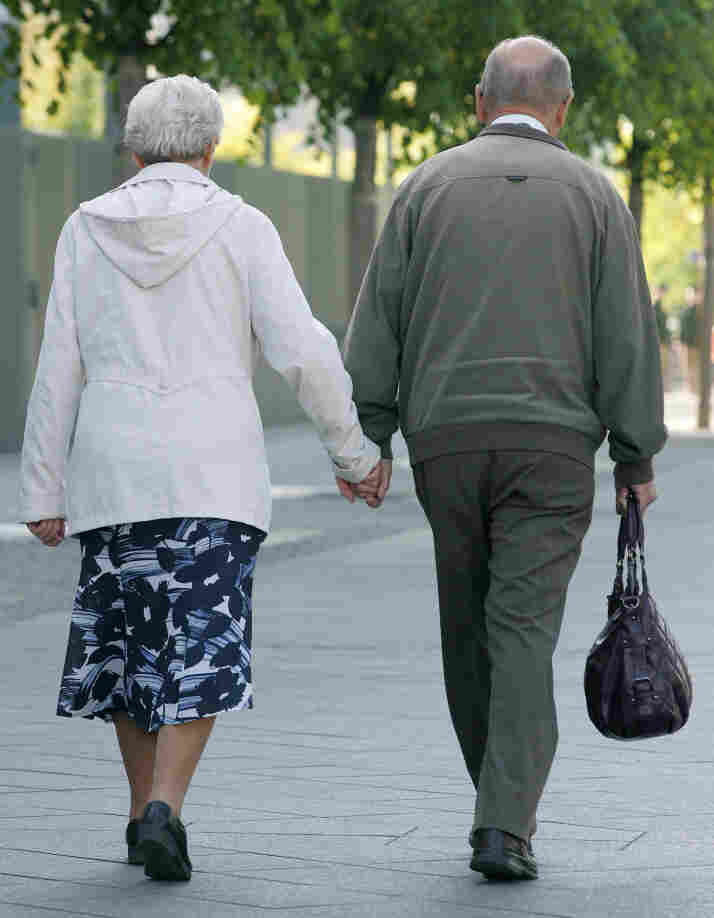 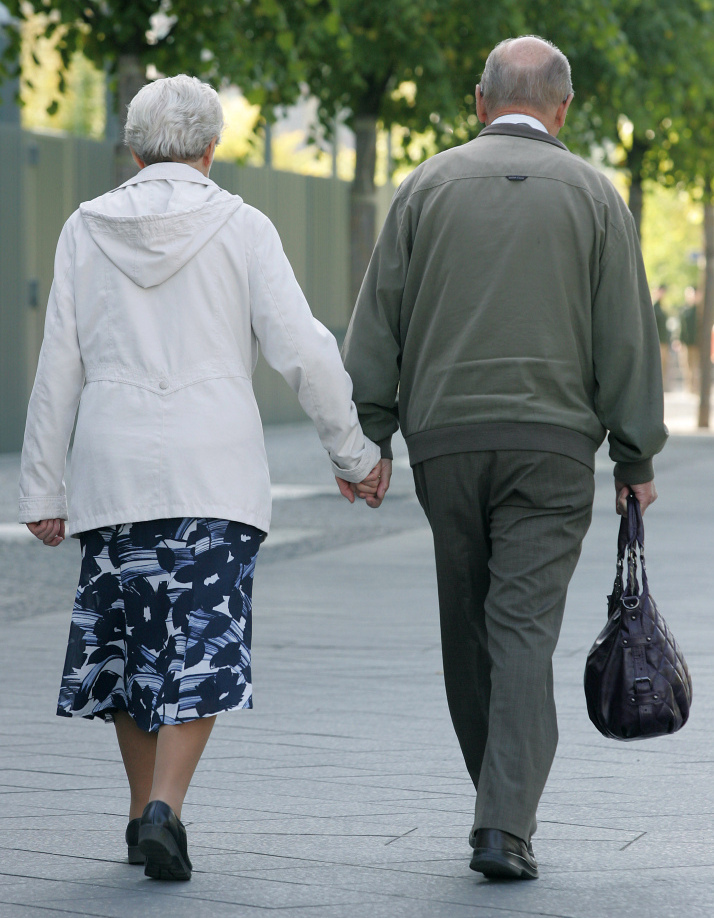 An elderly couple holds hands while walking along a Berlin street. A recent study showed that walking grows the region of the brain that archives memories.

As part of normal aging, the hippocampus shrinks. And this shrinkage speeds up as we grow older, foreshadowing memory problems and dementias like Alzheimer's disease.

But there's been some good news in the past decade: Scientists have discovered that in certain areas of the aging brain, new cells are born and grow throughout through life. Neuroscientist Peter Snyder, a researcher at Brown University's Alpert Medical School and Rhode Island Hospital, says the hippocampus is one of those brain areas that continue to form new cells and make new connections between cells.

"What we're finding is that of all of these noninvasive ways of intervening, it is exercise that seems to have the most efficacy at this point — more so than nutritional supplements, vitamins and cognitive interventions," says Snyder, who studies what we can do to maintain memory as our brains age.

Snyder says several studies have been published recently on the power of exercise on the aging brain.

"The literature on exercise is just tremendous," he says. "What we find is that with exercise — with aerobic exercise, a moderate amount on a regular basis — there are chemical changes that occur in the brain that promote the growth of new neurons in [the hippocampus]."

The major chemical change in the hippocampus during aerobic exercise is an increase in a brain protein called BDNF, which acts like a fertilizer during the birth of new brain cells by nourishing new connections between neurons.

Some of the most provocative evidence on the power of exercise on the brain comes from a study just published in the Proceedings of the National Academy of Sciences by neuroscientist Art Kramer at the University of Illinois at Urbana-Champaign. Kramer and his colleagues have documented the impact of exercise on the growth of the hippocampus in a small group of elderly people over the course of one year.

"The participants in our study were 120 very sedentary people," Kramer says.

He adds none had dementia or memory problems when they entered the study. "They were relatively healthy, but certainly 'couch potatoes' would fit as a label."

One of those "couch potatoes" who volunteered for the study was Gregory Stanton, a 66-year-old semi-retired college professor. He admits to not exercising regularly but counters that he was physically quite active remodeling his home. So he refers to himself as "a semi-couch potato."

Stanton and the other 120 men and women in the study ranged from 60 to 80 years old. When they entered the study, they were randomly divided into two groups.

"One was the aerobic exercise group," Kramer says. "Those were people who walked further and faster as time went on. And the others in our control group were in a toning, stretching and light-strengthening group."

Stanton was randomly assigned to the aerobic exercise group.

"Basically, it's walking a track in one of the gym facilities," Stanton says. He and the others in the aerobic group walked the track for about 40 minutes three times a week for a year. Stanton says he averaged about 3 miles each session. After each session, he was breathing hard and had worked up a sweat, he says.

The idea was for each participant to walk fast enough to reach aerobic exercise level, Kramer explains, which is generally considered to be 70 percent of one's maximum heart rate.

All the participants in the study had MRI brain scans done before the study began and again a year later when the study ended. Then the researchers analyzed the MRI data.

"What we found," Kramer says, "is that individuals in the aerobic group showed increases in the volume of their hippocampus."

The increase in volume — again for the aerobic but not for the non-aerobic group — was about 2 percent.

"The 2 percent increase we can think of as turning back the clock about two years," Kramer says.

By comparison, "the individuals in the control group — in the toning and stretching group — lost about 1.5 percent [of their hippocampal volume]," Kramer says. "So we can think of it as about a 3.5 percent difference compared to those individuals who didn't benefit aerobically."

The results are small but suggestive. This finding shows that not only did the aerobic exercise protect against normal shrinkage, but also that new cells were added to the hippocampus. The researchers also saw a significant increase in that important brain-fertilizing chemical BDNF in the plasma of those in the aerobic exercise group — but not in the control group.

But did the growth in the hippocampus translate into improvements in memory? Both groups were given memory tests before and after the yearlong exercise program. Kramer says these tests looked specifically at a type of memory called "spatial memory," which records information about our environment, like the layout of the neighborhood or the interior of the grocery store.

At the start of the study, both the aerobic and the non-aerobic group scored similarly on the spatial memory test. But after the yearlong program, the group that did aerobic exercises had improved significantly on its spatial memory tests, bettering its own scores from a year earlier. The non-aerobic group had not improved in memory after a year of stretching, toning and lightweight lifting.

As for "semi-couch potato" Stanton, who'd been in the aerobic group, he says he didn't notice any improvement in his memory. He still has problems remembering people's names. But he did notice he had more physical stamina after the yearlong aerobic walking program.

In spite of this, Stanton says he still doesn't maintain a regular exercise regimen. He says while he knows it's good for him, he, like many of us, can't find the time. He's just too busy.