Accessibility links
Money For Mentors: Portland Program Sees Success Fifteen million troubled kids who need a mentor don't have one, according to The Mentoring Group. In Portland, Ore., Friends of the Children tries to bridge that gap through paid mentors. Anthony Blackmon credits the program for giving him confidence to pursue his dream in music. 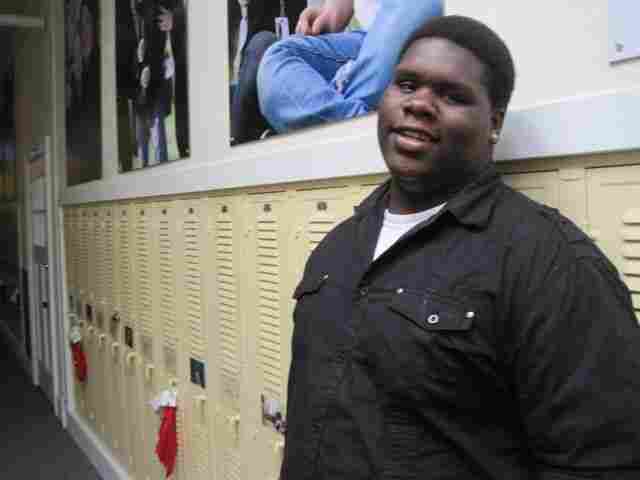 Anthony Blackmon spent time with mentors at Friends of the Children from first grade through high school. "This place helped me get to a place in my mind, saying, 'I can do this,' " he says. Colin Fogarty for NPR hide caption 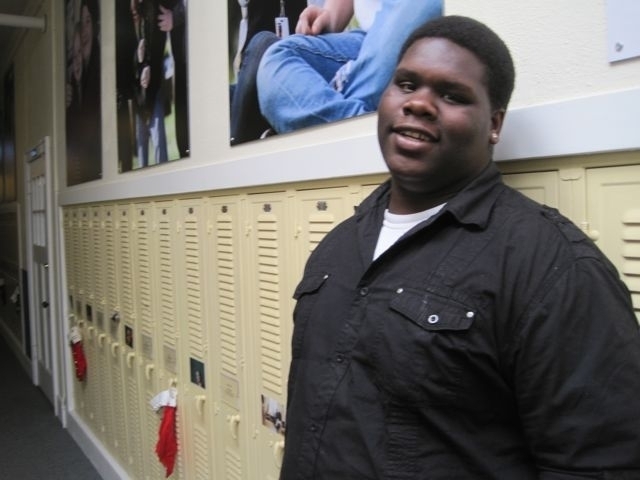 Anthony Blackmon spent time with mentors at Friends of the Children from first grade through high school. "This place helped me get to a place in my mind, saying, 'I can do this,' " he says.

One program that tries to bridge that gap through paid mentorships is Friends of the Children, founded by Portland, Ore., multimillionaire-turned-social-entrepreneur Duncan Campbell.

But do paid mentors make a difference?

When Anthony Blackmon was 8 years old, he was smart and flashed a sweet smile. His principal at the time, Joseph Malone, also remembers that Blackmon was always "getting into something."

"And he would get angry," Malone says. "And he'd get upset when he got angry. And it took him a while to calm down."

Blackmon's teachers worried that if they didn't intervene early, he'd grow even angrier and eventually join a gang. So they recommended him to Friends of the Children.

I went through the fire. Now I'm coming out as pure gold.

Blackmon was paired with a mentor, Earl Fonville. The two hung out together, played basketball and talked a lot about getting control of his behavior.

"I learned to think positive and to be the best I can be," Blackmon said. "And I just try to do the right thing."

At the time, in 2000, Blackmon told Fonville he wanted to grow up to be a Christian hip-hop artist.

"I definitely believe that he can be those things that he wants to be if he makes good choices," Fonville said. "That's what I try to instill in him."

Fonville's role was something of a social worker, friend, teacher and adviser — all rolled into one. Blackmon's mother, Cheryl Blackmon, says she could see a difference early on.

"Anthony, before he was in the program, seemed to be angry all the time," she says. "And since Earl's been around him and in his life, I've noticed that that's calmed down a whole lot."

Most mentoring programs — like Big Brothers, Big Sisters — rely on volunteers. Friends of the Children stands apart because its mentors work full-time for a salary.

It's unclear whether that approach is more successful. One researcher at the University of Oregon has begun a long-term study to find out. Friends of the Children reports that 85 percent of its students graduate from high school, whereas the national average is 75 percent, according to the U.S. Department of Education.

Friends Executive Director Judy Stavisky says her program is successful because the mentors get intensive social work training, and each mentor works with no more than eight kids.

The role of the mentor is both an anchor and a sail for the kids, because these kids have very little of each.

"The role of the mentor is both an anchor and a sail for the kids, because these kids have very little of each," Stavisky says. "We provide that grounding experience for the kids. We also open their eyes to the universe of possibilities of the way they could behave and the way their lives can be."

One of the first steps to succeeding is imagining yourself as a success. Stavisky says the key is sticking with those kids for the long haul, from first grade through the end of high school.

That was the original vision from Friends founder Campbell. He grew up in the same rough Portland neighborhood as Blackmon and faced challenges of his own — alcoholic parents and a dad in prison. Campbell made a fortune in timber investments. But he says measuring success as a social entrepreneur is a different calculation entirely.

"Like in business, you know what you're doing monthly, yearly and you see the outcome — or you see the reward or the failure," Campbell says. "Here, we don't even know for five to seven to eight years, let alone 12 years, if we've made a real change in a child's life. It takes patience."

After 18 years, Campbell's creation now spans six cities, including New York and Boston. The salaried mentorships are costly — about $9,000 per child per year. So was that expense worth it in the case of Anthony Blackmon?

Now 18, Blackmon attends Benedict College in South Carolina. The boy who wanted to be a Christian hip-hop artist is studying music. He plays the piano.

Blackmon says Friends was one of the few constants in his life.

"There were some things going on at home, plus, you know, I had problems at school," he says. "So when I came to Friends, it was like my getaway."

In fact, he says it was hard to leave Friends. At a goodbye ceremony last May, he says, his mentor "cried like a baby."

"You know, I cried, too," he says. "We shared tears. This place helped me get to a place in my mind, saying, 'I can do this.' You know, I went through the fire. Now I'm coming out as pure gold."

Blackmon says that rather than be in the spotlight, he aspires to be a music producer. That way, he says, he can help someone else succeed.

This story was a follow-up to a piece that originally aired 10 years ago. At the time, reporter Colin Fogarty profiled an 8-year-old child named Anthony. His last name was withheld because he was a minor. NPR has now been informed by Friends of the Children that they made a major mistake: The Anthony Blackmon in the current story is not the same Anthony. Both Anthonys had the same mentor. The Anthony profiled in the original piece dropped out of the program and they have lost contact with him. NPR is looking into how Friends of the Children made the error and what happened to the young man from the original story.