Accessibility links
Kabul Seeks Control Of Women's Shelters Under a proposed law, shelters would be run by Afghanistan's Ministry of Women's Affairs. But women's advocates say government control will mean government interference and would turn the shelters into prisons. 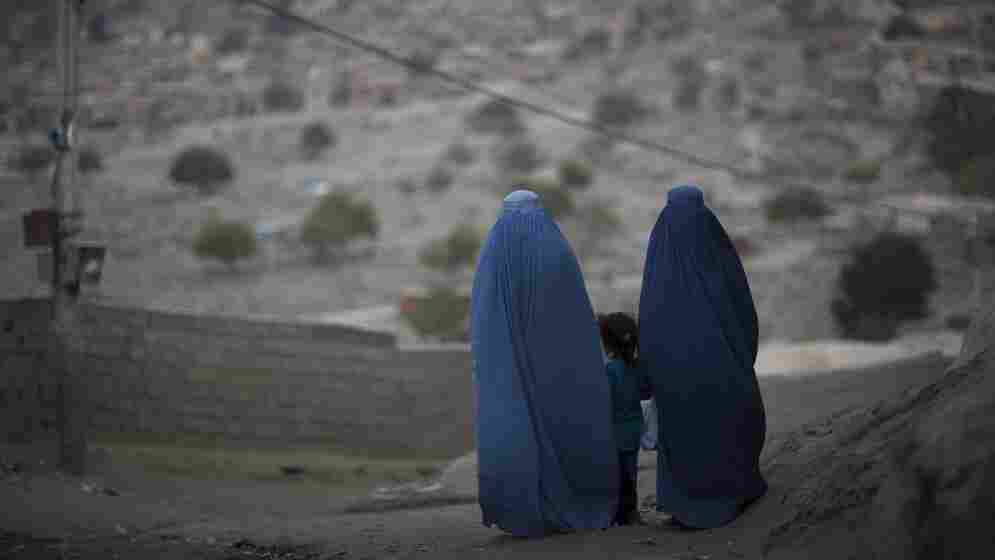 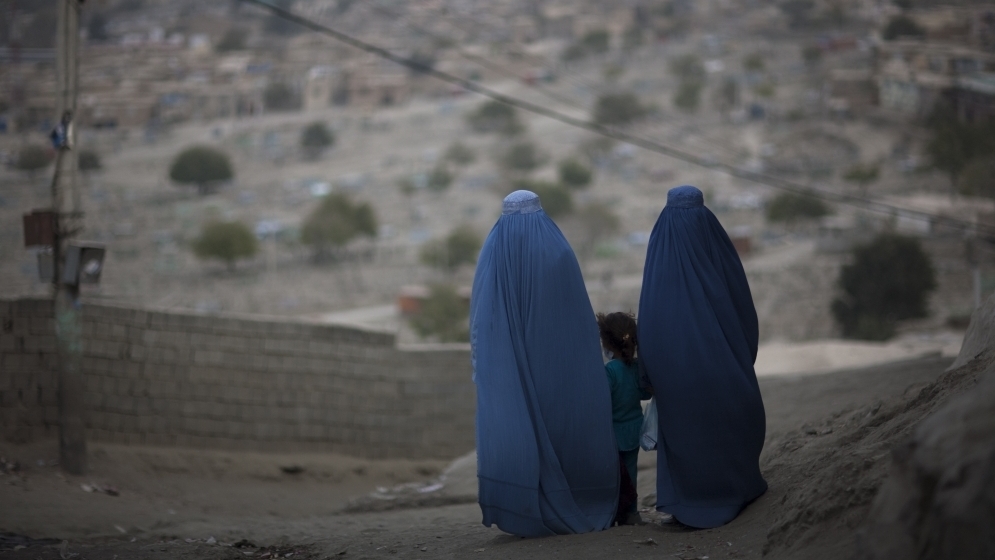 A girl stands among Afghan women clad in burqas in Kabul last October.

When she was 13 years old, Khatira's stepmother gave her the bad news: It was too expensive to keep her, so she would have to marry a cousin living in Kabul.

"They treated me well for the first month, but then they started beating me all the time," she says of her new in-laws.

Khatira, who goes by one name, says her husband was mentally ill and she fell prey to his brothers, who tried to force her into prostitution. She resisted.

"They tied my hands and feet," she says. "They shaved my head and burned me on my feet with an iron from the fire. They beat me on my head with a high-heel shoe; you can still see the mark."

Neighbors helped her flee, and she found her way to one of Kabul's battered women's shelters, run by a group called Women for Afghan Women. The shelter helped her get a divorce, but now her family considers her disgraced.

"During my time in the shelter nobody has visited me. When I see family visiting the other girls it makes me cry," she says.

They tied my hands and feet. They shaved my head and burned me on my feet with an iron from the fire. They beat me on my head with a high heel shoe — you can still see the mark.

Khatira, an abuse victim who found her way to one of Kabul's battered women's shelters

A copy of the draft law says that any woman trying to entering a shelter would first need the approval of a committee from eight government offices. She would be subject to a medical exam that might include a virginity test and essentially be confined to the shelter. The facilities would be run by the Ministry of Women's Affairs.

"Taking over the shelters means more support to women who run away due to family problems," Hussan Ghazanfar, acting minister of women's affairs, said at a news conference last week.

But women's advocates in Kabul are concerned that government control will mean government interference. Shelter administrators say they already get pressure from high-ranking government officials on behalf of families who want the women back in their communities — even when it's likely that the women or girls will be killed when they return.

"We are a civil society, we can say no to them, 'I don't want this girl to go back, her life is at risk,'" says Huma Safi, program director at Women for Afghan Women, which runs several shelters.

"If it is under the control of the government, [the shelter] will not say no," she adds.

One resident of a Women for Afghan Women shelter is now world famous — Bibi Aisha, a child bride whose face appeared on the cover of Time magazine. Aisha's husband hacked off her nose and ears to punish her for running away. Aisha is now getting medical treatment in the U.S. But there are many, many more stories like hers.

Some of the girls in the shelter were raped and then forced to marry the rapist in order to avoid "dishonoring" their community. Some were promised as children to much older men — and some say their husbands kept them with farm animals separate from the house.

"People don't have education," says Safi, "If women and men knew their rights in Islam and Afghan civil law, then we wouldn't have violence."

But tradition often trumps written law in Afghanistan, and women's shelters have become a lightning rod for controversy over what many conservative voices in Afghan society see as a struggle between local mores and invasive Western ideas about women. Many influential Afghan figures disagree with Safi's tolerant interpretation of the law.

In October 2010, an edict by the Afghan Supreme Court said that women who run away from home can be charged with prostitution or adultery, unless they go to the police or the home of a relative.

"Afghan law cannot be in contradiction with Sharia," says Enayatullah Balegh, a member of Afghanistan's Council of Muslim scholars and mullah at one of Kabul's most important mosques.

The Afghan justice system lacks any mechanism to resolve a dispute between Sharia, or the law of Islam, and the constitution — but in Mullah Balegh's opinion, Sharia allows women to live only in the company of a close male relative — her husband, father, brother or son. Balegh says that means the women's shelters are illegal and should be shut down.

"The shelters have created a thousand problems and controversies," he says.

In 2009 he set up a commission led by a religious scholar to look at the shelters. Last year, a television station sponsored by Afghanistan's Vice President Mohammad Qasim Fahim ran what it called an "expose" alleging, without any evidence, that the shelters are fronts for prostitution.

Advocates say Karzai is playing to religious conservatives because he's trying to bring the Taliban to the negotiating table.

"You have to see this as a government where you've got a Parliament, a Cabinet, various ministries that are effectively controlled by conservative factions that think very much like the Taliban when it comes to things like women's rights," says Rachel Reid of Human Rights Watch.

"In a way, we shouldn't be surprised that things are moving this way, particularly at a time when President Karzai wants to present himself as a man that the Taliban can do business with," she says.

Another issue is funding — at the moment independent charities and the U.N. support all the shelters in Afghanistan. The draft law suggests that the international community should shift all its funding to the Afghan Finance Ministry, which would transfer the money to the Ministry of Women's Affairs, and then to the shelters.

A United Nations spokesman warns that international donors will frown at funding government-run shelters, and that the international norm is for shelters to be at least partially independent. What he didn't have to say is that rampant corruption in the Afghan government might keep donors from giving.

Last week the women's minister turned that charge around at a news conference, accusing women's organizations of waste and corruption.

"These shelters do not care about the women in them ... they are only concerned about their budgets," she said, claiming that each shelter was funded to the tune of $1 million.

The U.N. and a consortium of women's charities said the accusation was baseless and the million-dollar figure was invented.

Last week, the U.S. state department expressed concern about the changes in the law on women's shelters, and over the weekend President Karzai himself responded at a news conference.

"This government is particularly aware in terms of the needs of women, the suffering of women and the emotional impact it has had on us as a society. So we will be very diligent about it," he said.

The president added that shelters that follow the rules will continue to be supported, but he made no comment about how those rules are changing.