Accessibility links
Wisconsin Protesters Want Governor To Compromise Demonstrators angered by the governor's budget-repair bill, which would eliminate most of the collective bargaining rights for public employees, are expected to overflow the state Capitol for a seventh consecutive day Monday. 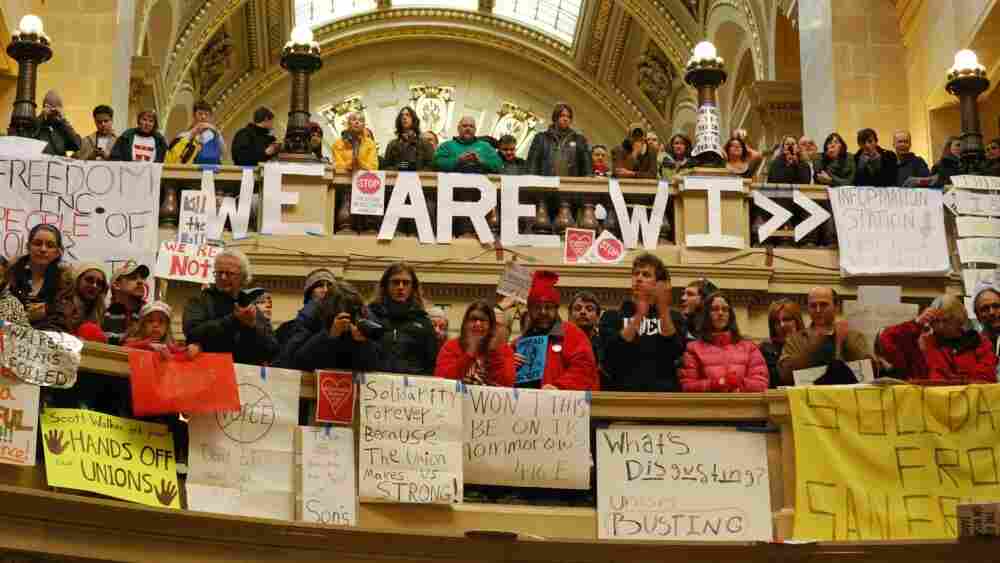 Protesters are expected to fill and surround the Capitol in Madison, Wis., again Monday, the seventh day of demonstrations against Gov. Scott Walker's plan to increase health care and pension contributions by public employees while eliminating most of their collective bargaining rights.

Senate Democrats remain out of state to try to thwart a vote on the bill.

Snow, slush, rain and sleet kept the size of Sunday's crowd down and forced the protests indoors, but thousands still packed into the Capitol rotunda. They crammed themselves up to 10 deep along the rails of the upper floors to voice their displeasure with the Republican governor's budget-repair bill. 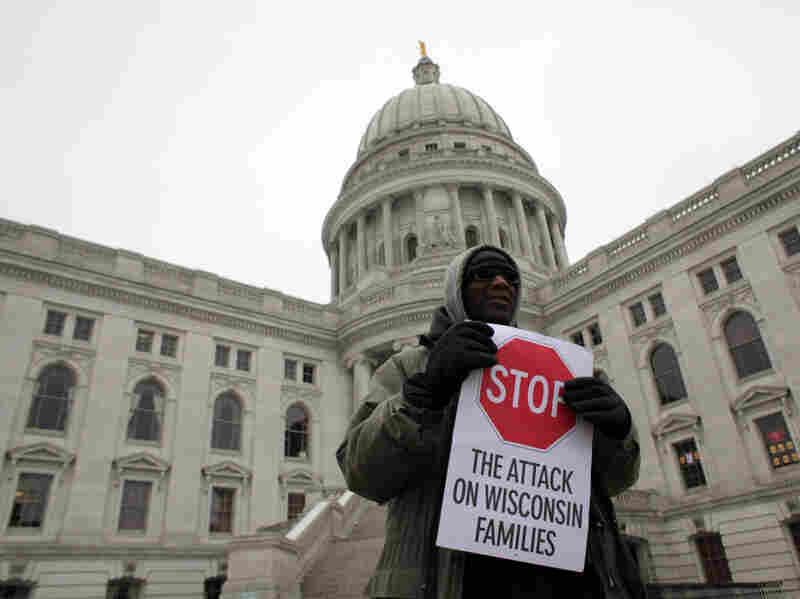 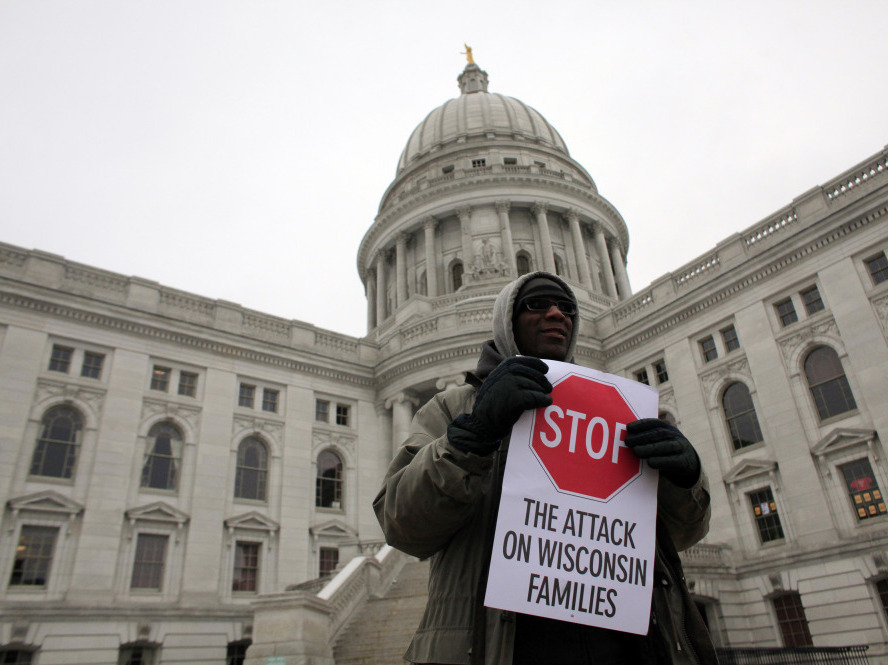 A protester rallied outside the Wisconsin State Capitol in Madison on Monday.

Union leaders for the state's teachers, health care workers and other public employees say they'll give the governor the financial concessions he wants — amounting to a pay cut of 8 percent or more — but they will stand firm on what they call union-busting proposals.

"Union busting in disgusting," says Angela Aldous, a nurse in the cancer unit at the University of Wisconsin Hospital. "I see a lot of disgusting stuff where I work, and this is the most disgusting thing I've ever seen."

Many teachers will return to work Monday. Classes were canceled in several districts for a day or two — even three days in Madison last week — as teachers called in sick so they could protest.

In many districts, Presidents Day is not a holiday, so union leaders urged teachers who don't have the day off to return to their schools.

Madison's teachers, however, voted by a razor-thin margin to stay out and protest one more day. They'll go back to their classrooms Tuesday.

"There's a lot of concern about the kids," says Deborah Kades, an eighth-grade special education teacher. "That was the bulk of the discussion: what's better for the students."

But Kades and other teachers argue that what Walker is trying to do will hurt students more in the long term. They say eliminating most collective bargaining rights will make it easier to fire veteran teachers, increase class sizes and eliminate aides.

"We're willing to take this as long as it takes, because in the end we're doing the right thing," Walker said. "For us, we have to do this."

Walker told Fox News Sunday that the 14 Democratic senators who fled Wisconsin to deny Republicans an opportunity to vote on the budget proposal should come back and do their jobs.

"If you want to participate in democracy, you've got to be in the arena. And the arena is right here in Madison, Wis. It's not hiding out in Rockford, Ill., or Chicago or anywhere else out there," Walker said.

Democrats say they're prepared to stay out of the Capitol until the governor is willing to compromise.

Elsewhere in the state, developments in Madison dominate conversations.

"I'm fully behind Gov. Walker," says Steve Armstrong, a customer at an IHOP in Janesville. "It's time for the unions to take a step back."

"He's got to fix the budget deficit, and we have to make hard decisions. It's hard on everybody. It's been hard on the private sector for a long time. It's just a step we have to take," Armstrong adds.

Postal worker Todd Taylor agrees that Wisconsin's public employees should pay more toward pensions and health insurance, but he does disagree on one issue.

"At this point, I'm in support of the protesters," Taylor says. "I am against him [Walker] trying to take away the collective bargaining. Being in a union myself, that's what I have a problem with."

But like many in Wisconsin, Taylor and others say they want both sides to try to reach compromise — and soon.