Wisconsin state Sen. Scott Fitzgerald, the Republican leader of the state Senate, backs Gov. Scott Walker's plan to close a budget gap in part by having state workers pay more for pensions and benefits. The bill, which also would permanently limit public employees' bargaining rights, has sparked a week of protests. 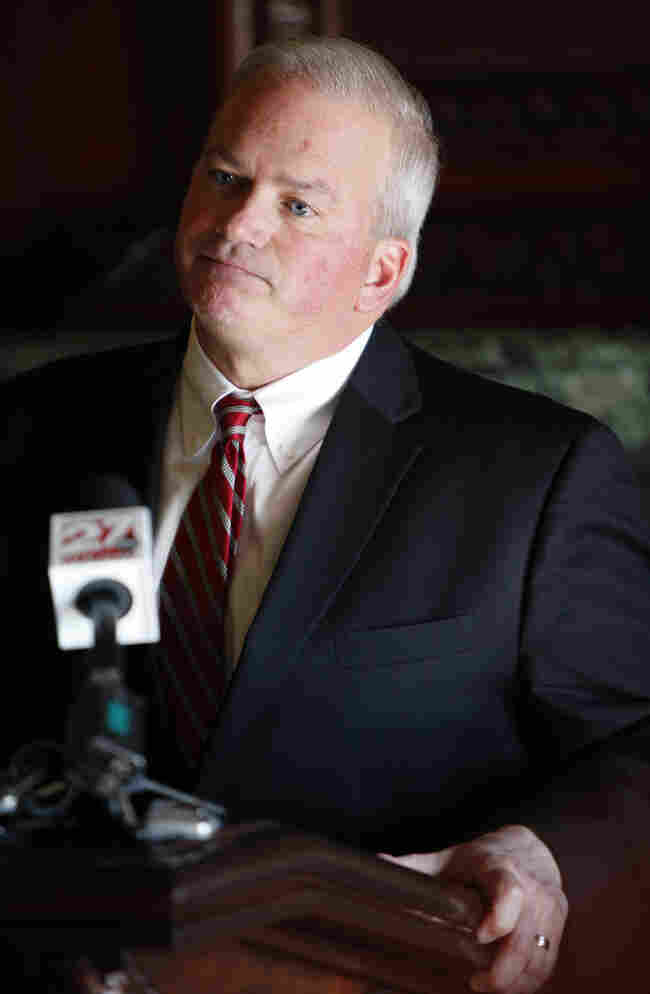 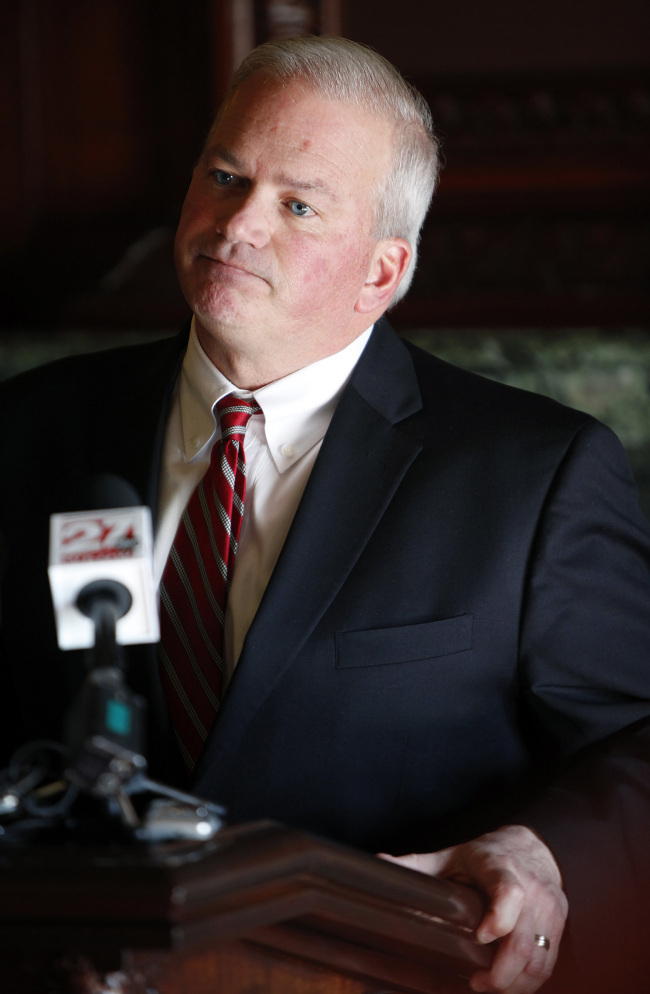 State Senate Majority Leader Scott Fitzgerald listens to a reporter's question during a news conference Saturday in the Senate parlor at the state Capitol in Madison.

Fitzgerald would have held a vote on this already, except that Senate Democrats literally have walked away. He tells Morning Edition's Steve Inskeep that limiting collective bargaining rights will give local officials the flexibility they need to absorb the state's deep budget cuts.

Steve Inskeep: Unions have already said that they will give the financial concessions you want; they say the budget is fixed here effectively. Why is that not the end of the story?

Sen. Scott Fitzgerald: What Gov. Walker is preparing to do next week is announce his full budget, which will include deep, deep cuts in education as well as shared revenue, which are the dollars the state sends to local levels of government, county and municipal government. These cuts are so significant that both mayors and school board presidents will need a ton of flexibility to be able to survive them, to be able to put a budget together that will be able to absorb these deep, deep cuts. And the way to do that is by limiting the collective bargaining that currently exists in Wisconsin.

We're a very strong unionized state, have been for many, many years. But under the public employees unions — they were created and allowed to organize back in 1970, so it's not something that is relatively historic in the way the rights were put together, and that's why right now we're trying to make the case that if we're going to be able to eliminate the $3.6 billion deficit that we're facing, these changes have to be made.

But I want to make sure I understand this. Mary Bell, the president of the Wisconsin Education Association Council, says: "Money issues are off the table. Public employees have agreed to Gov. Walker's pension and health care concessions, which he says will solve the budget challenge." Is she not telling the truth?

A shorter version of state Sen. Scott Fitzgerald's interview with Steve Inskeep aired for some broadcasts. Click the link below to hear the original, longer interview.

She's telling half the truth. What she's not really acknowledging is that 80 percent of a school's budget, 75 percent of a county's budget in Wisconsin is made up of salaries and benefits.

And she's saying she'll give you the concessions. I don't understand.

Well, and even with those concessions, it still does not allow those locally elected officials the ability to be able to manage that. Everything from workplace safety to some of the egregious items that are part of collective bargaining now in Wisconsin have a fiscal piece to it. And, you know, Mary's not acknowledging that right now.

The one thing we thought was reasonable is that, you know, the union should be able to sit down and work through wages. The rest of it can be decided by the school boards and the county boards and elected officials ...

Doesn't this even limit wage negotiations to a certain amount?

Well, there's a cap on where they can go and, again, fits into the full governor's budget that gets us out of this mess. You know, we're the tip of the spear, that's obvious. There are six other states that are absolutely on the verge of bankruptcy. And it seems more appropriate to get everyone who is a public employee worker a haircut than massive layoffs, and that's the other thing that's looming out there if we don't make some significant changes here.

So Mary Bell and those that represent AFSCME [American Federation of State, County and Municipal Employees] in Wisconsin are saying, listen, we're not going to allow the flexibility that ultimately will be needed. So what we need to do is simply wait to see the governor's budget, which will be announced next week.

Sen. Fitzgerald, I want to give you a full opportunity to answer the charge that's been made against your side, and this is the way some people might put it at this time. A couple of years ago, a Democratic Congress in Washington was about to turn to health care, and they generated widespread protest from people who specifically said Democrats were taking advantage of a crisis to push their own agenda. Are you taking advantage of a crisis now to push against unions because they do not politically support you?

No, these unions were created in 1970 by the Wisconsin Legislature, and over the last 40 years what's happened is through arbitration and other negotiations, the scales have been tipped in favor of the unions. And the problem with that is that we're hearing from local elected officials that are saying listen, our hands are tied. We walk to the table, and the best we can do is the first offer. So there's definitely, I think, a longtime perspective on this in that things have incrementally become worse and worse and worse in relationship to school boards and county boards being able to negotiate with the public employees.

By limiting the negotiating powers of unions so severely and also requiring as part of this bill that they would have an annual vote on whether they should continue to exist, are you basically working to say we want to go back to before 1970 — there really should not be public employee unions at all?

I think, you know, if we wanted to do that, certainly that would have been the move that Gov. Walker would have made and the Legislature would have had to make a decision on whether or not we support him. No, we didn't — there was not a movement to simply take out the unions and say that, you know, from this point forward there shall be no AFSCME and SEIU [Service Employees International Union] ...

But aren't you basically eliminating the justification for having a union and then having an annual vote on whether it should exist? Doesn't that pretty much amount to the same thing?

No, I think there's definitely some room there for individual employees who do not want to be forced to join the union. I think that's part of our debate. The $900, the $1,100 a year that the individual workers are forced to kick into the union whether or not they represent them or not, we have because of the fair share provision in Wisconsin, that's part of the flexibility I think is needed for not only the employers, the county boards and the school boards, but also for the employee to make a decision on whether or not they want to be part of that union.

And Sen. Fitzgerald, why is this an issue on which there should be no compromise? And if I'm not mistaken, that's the language that you've used and that the governor's used: "no compromise."

No compromise on backing off of the bill and where the bill is at right now. You know, when my Democrat colleagues decided to jump in a bus and drive to Chicago and are held up in a hotel down there, we moved through the legislative process. They had an opportunity to amend the bill in the second reading in the state Senate, and they decided not to participate in that.

In the Assembly, they will begin tomorrow and they will have a full debate on the bill. And they will offer amendments, and I'm guessing that consideration for some of those amendments will be legit. Unfortunately, the Democrats in the Senate decided to take another route, and quite honestly I think that they've embarrassed themselves, and shut down government. And that's not what they were elected to do.

Have you been in touch with any of your Democratic colleagues?

I have. The minority leader Mark Miller called late last night and once again told me they would not participate in the Senate's actions. And we have a calendar set for tomorrow at 10 a.m., and the Republicans will be there conducting business, and business on other bills, I must say — not just this bill in front of us, but there are many other issues that are before the state Senate, and right now it's one party making the decisions on all of those issues.

Sen. Fitzgerald, it's a pleasure speaking with you this morning. Thank you very much.

Thank you. It's good to be with you.