Accessibility links
Wisconsin Governor Refuses Unions' Offer Wisconsin Gov. Scott Walker again rejected a proposed compromise Monday to end a political stalemate over collective bargaining rights that led to 14 Senate Democrats skipping town and motivated tens of thousands of people to march on the Capitol in protest for more than a week. 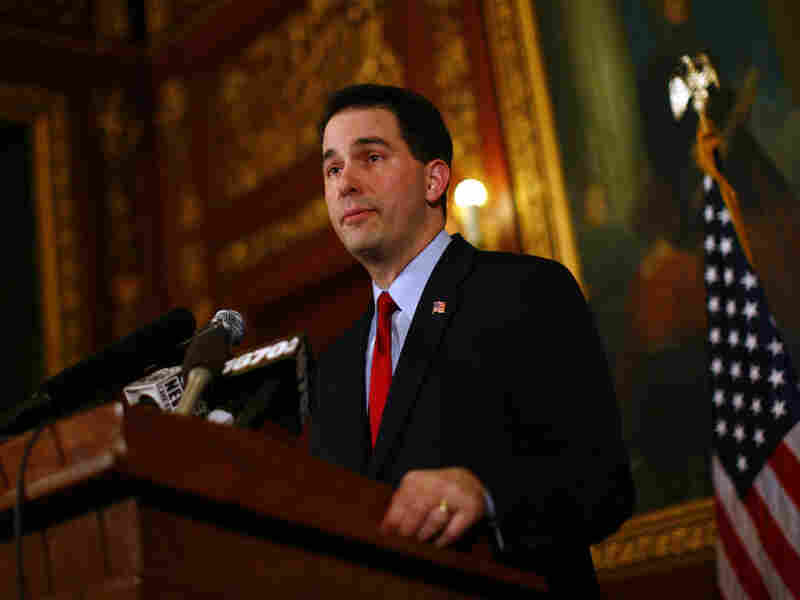 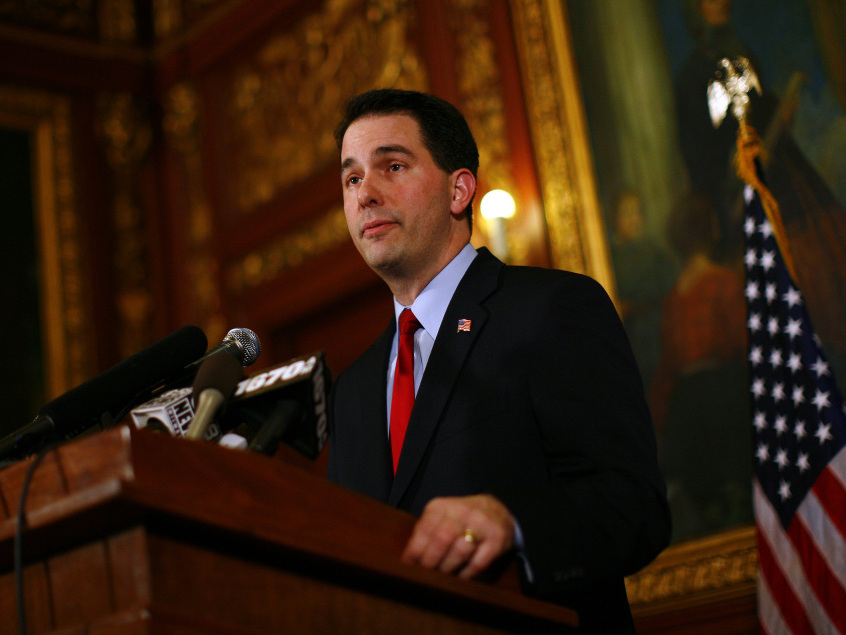 Republican Gov. Scott Walker speaks at a news conference inside the Wisconsin State Capitol on Monday.

Wisconsin Gov. Scott Walker again rejected a proposed compromise Monday to end a political stalemate over collective bargaining rights that led to 14 Senate Democrats skipping town and motivated tens of thousands of people to march on the Capitol in protest for more than a week.

Walker said Monday afternoon he wasn't interested in compromises that have been floated by public employee unions and even a Republican state senator. He spoke inside his heavily guarded conference room in the Capitol as thousands of people screamed and stomped outside his office to "Recall Walker!"

Walker reiterated his longstanding position that his proposal is about balancing Wisconsin's budget and not busting the unions. He called one of the proposed compromises a "non-starter."

"For those 14 Senate Democrats, you've had your time," Walker said. "Now it's time to come home." 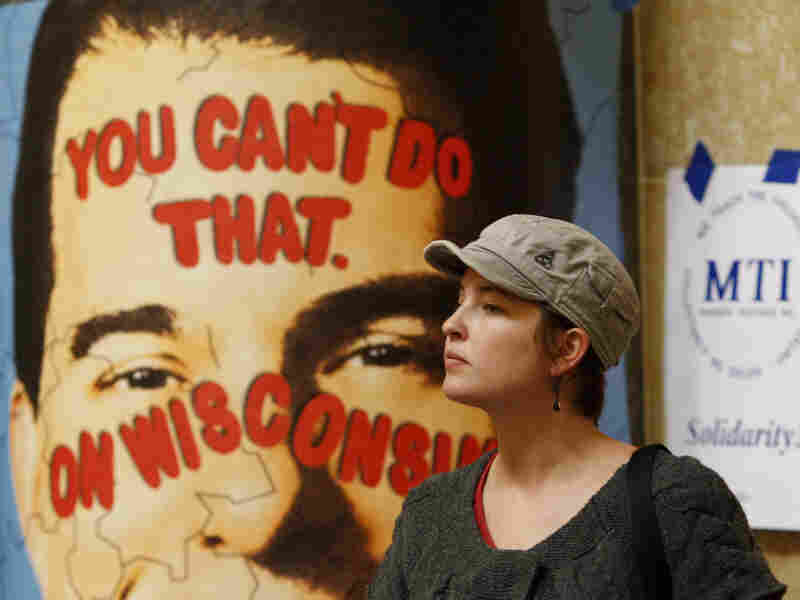 A protester looks on near a poster of Republican Gov. Scott Walker inside the state Capitol on Monday in Madison, Wis. Opponents to Gov. Walker's bill to eliminate collective bargaining rights for many state workers are taking part in their seventh day of protesting. Jeffrey Phelps/AP hide caption 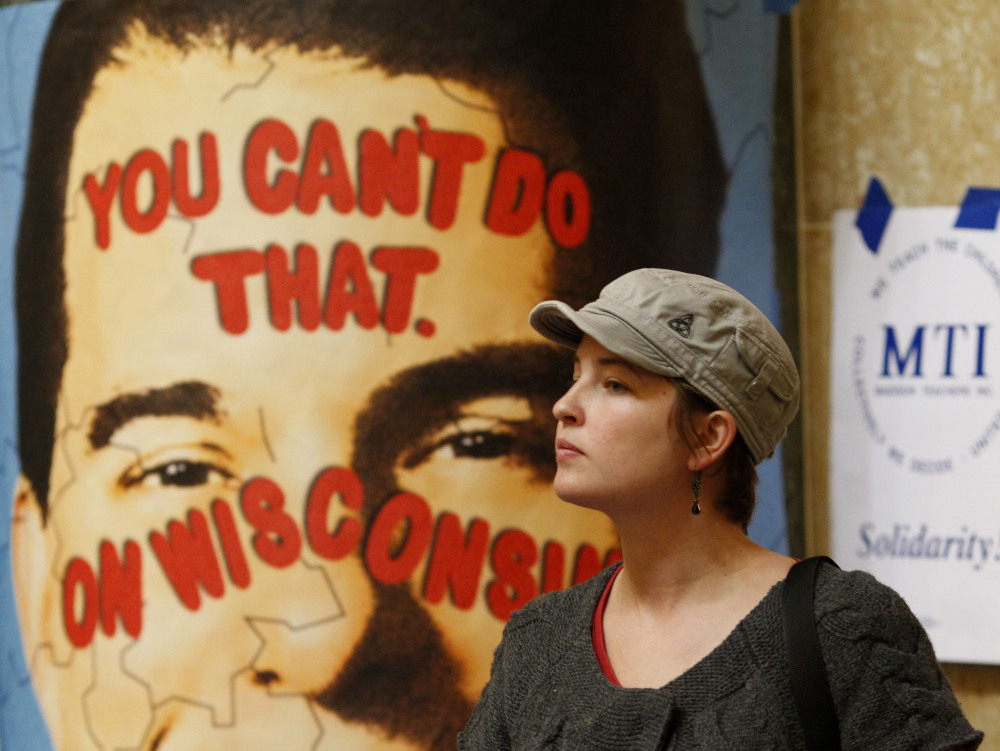 A protester looks on near a poster of Republican Gov. Scott Walker inside the state Capitol on Monday in Madison, Wis. Opponents to Gov. Walker's bill to eliminate collective bargaining rights for many state workers are taking part in their seventh day of protesting.

Walker has repeatedly rejected both offers, saying local governments and school districts can't be hamstrung by the often lengthy collective bargaining process and need to have more flexibility to deal with up to $1 billion in cuts he will propose in his budget next week and into the future.

With no resolution imminent, Senate Republicans were resigned Monday to forge ahead with less-controversial business such as tax breaks for dairy farmers and commending the Green Bay Packers on winning the Super Bowl.

As the standoff entered its second week, none of the major players offered any signs of backing down in a high-stakes game of political chicken that has riveted the nation and led to ongoing public protests that drew a high of 68,000 people on Saturday.

Thousands more braved cold winds and temperatures in the 20s to march again on Monday, waving signs that said "Stop the attack on Wisconsin families" and "solidarity."

More On The Wisconsin Protests

The emergency plan Walker wants the Legislature to pass would address this year's $137 million shortfall and start dealing with the $3.6 billion hole expected by mid-2013. The benefits concessions from public employees would amount to $30 million this year, but the largest savings Walker proposed comes from refinancing debt to save $165 million.

That portion must be done by Friday for bonds to be refinanced in time to realize the savings by June 30, the end of this fiscal year.

Walker said not passing the bill by Friday would make even deeper cuts necessary and possibly result in laying off 1,500 workers over the next four months.

The high-stakes fight over union rights is about more than pay and benefits in the public sector, experts said on Monday. It could have far-reaching effects on electoral politics in this and other states by helping solidify Republican power for years.

While Walker's plan to wipe out collective bargaining rights for most public employees has galvanized Democrats and union members in opposition, the GOP could benefit long-term by crippling a key source of campaign funding and volunteers for Democrats.

"It would be a huge landscape-altering type of action, and it would tilt the scales significantly in favor of the Republicans," said Mike McCabe, director of the Wisconsin Democracy Campaign, which has long tracked union involvement in Wisconsin elections. "This is a national push, and it's being simultaneously pushed in a number of states. I think Wisconsin is moving the fastest and most aggressively so far."

The National Education Association, which represents 3.2 million workers, said teachers' collective bargaining rights are also being targeted by proposals in Ohio, Idaho, Indiana and other states.

The Wisconsin plan strikes at a key Democratic Party constituency by eliminating the mandatory union dues teachers and other public workers are required to pay. The plan would take away the ability of most municipal and state employees to bargain any condition of employment beyond their base salaries — including benefits, work schedules and overtime pay. And unions would need to survive a vote of their members every year to stay in existence.

Public safety workers, including police officers, firefighters and state troopers, would keep their rights under the plan. Those unions endorsed Walker in his campaign for governor last year, but he said they were exempted because he did not want to jeopardize public safety if they walked off the job.

"It's stunning partisan calculation on the governor's part, and really ugly," she said.

Walker has denied political motivations, saying his proposal is about cutting state and local spending for years to come. But in an interview with The Associated Press last week as protests raged inside the Capitol, he acknowledged his plan to allow workers to opt out of paying their dues could cripple unions.

"That's something that threatens these national leaders. They want that money. That's their existence. Having mandatory membership is what keeps them going," he said. "If people have a choice, I think many of them are afraid that things will change, and that's where the intensity is. But for us, it's about balancing the budget and doing it in the most responsible way possible."

This story contains material from The Associated Press.