Accessibility links
Battles May Cripple A Weakened Labor Movement Anti-union efforts are cropping up in many states. And with Republicans in the ascendancy in many statehouses, they have the upper hand against unions, which are traditionally allied with Democrats. 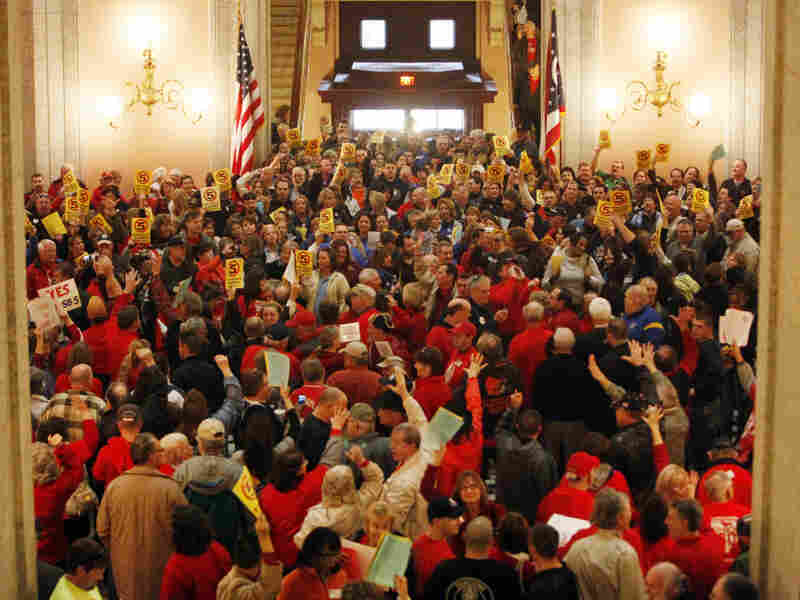 Hundreds of supporters for and against a bill that would restrict collective bargaining rights of public employees fill the Ohio Statehouse rotunda on Thursday in Columbus. Terry Gilliam/AP hide caption 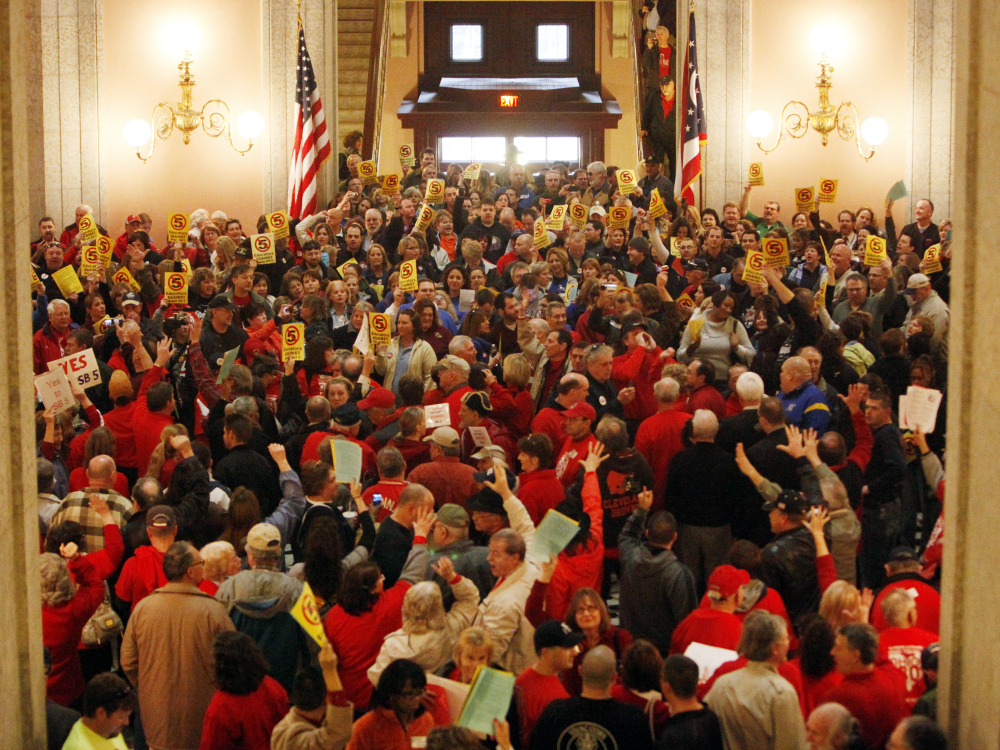 Hundreds of supporters for and against a bill that would restrict collective bargaining rights of public employees fill the Ohio Statehouse rotunda on Thursday in Columbus.

Labor unions and their supporters are planning protests in more than a dozen states this week. These rallies are nominally to support government workers in Wisconsin, who could lose many of their union protections as a result of legislation there. But the movement is going national now because anti-union efforts are cropping up in many states.

And what happens in these statehouses could cripple a labor movement that has been in slow decline.

"Wisconsin has become ground zero for the national labor movement," says history professor Stephen Meyer at the University of Wisconsin in Milwaukee. And he says a lot more is at stake than the unions in one state.

"Already we've got Ohio, possibly New Jersey ... and other states that are readying similar types of legislation," he says.

Ohio Gov. John Kasich, for example, is pushing for legislation to eliminate collective bargaining for state employees. On Monday, union supporters came out to protest.

Kathleen Arthur, a retired teacher from the Cleveland area, says teachers would be willing to negotiate over pay and benefits to help the state deal with its financial troubles — but that should be done over the bargaining table, not by fiat.

"Both sides need to be represented," she says. "This is America. Everybody has a voice, not just the party in charge. Everyone has a voice."

If you ask labor professor Paul Mishler from Indiana University in South Bend, this battle is only nominally about state budgets.

"What they see as a fiscal crisis is really an excuse to go after the social and political strength of the unions," he says.

The impetus for change is chiefly coming from Republican legislators who realize if they can weaken the unions, they also weaken the Democrats, who are often backed by labor.

Mishler also sees it as another front in the struggle between businesses and workers.

In Indiana, the Chamber of Commerce is a driving force behind efforts to make paying union dues optional. Republican Rep. Gerald Torr ushered that bill through a key committee Monday.

"If the union is providing a good service ... and all of those employees decide to continue paying dues, this bill will have zero effect on them and they will still have the same collective bargaining rights that they have today," Torr says.

"The purpose of unions is to raise wages for their workers, and in many cases they succeed in doing so," he says. "However, in doing this, they raise labor costs."

As companies try to contain their costs, more settle in states where they don't have to pay as much.

And 2011 is proving to be a golden opportunity for businesses to press their cause. With Republicans in the ascendancy in many statehouses, they have the upper hand against unions, which are traditionally allied with Democrats. And Republicans have support from their voters, who look at union pay and benefits as simply too rich.

Vedder cites the United Auto Workers union as part of the reason General Motors went bankrupt. So he sees a system that's out of balance.

But James Gregory, a labor professor at the University of Washington, argues that even people who aren't in a union should be concerned about what could happen.

Up until now, Americans' civil rights have been expanding, Gregory says. If workers lose the right to band together under unions, he argues, that would mark a turning point in the nation's history.