Accessibility links
Earthquake Kills Dozens In Major New Zealand City Christchurch A powerful earthquake struck Christchurch, one of New Zealand's biggest cities, Tuesday at the height of a busy workday, toppling tall buildings and churches, crushing buses and killing at least 75 people in one of the country's worst natural disasters. 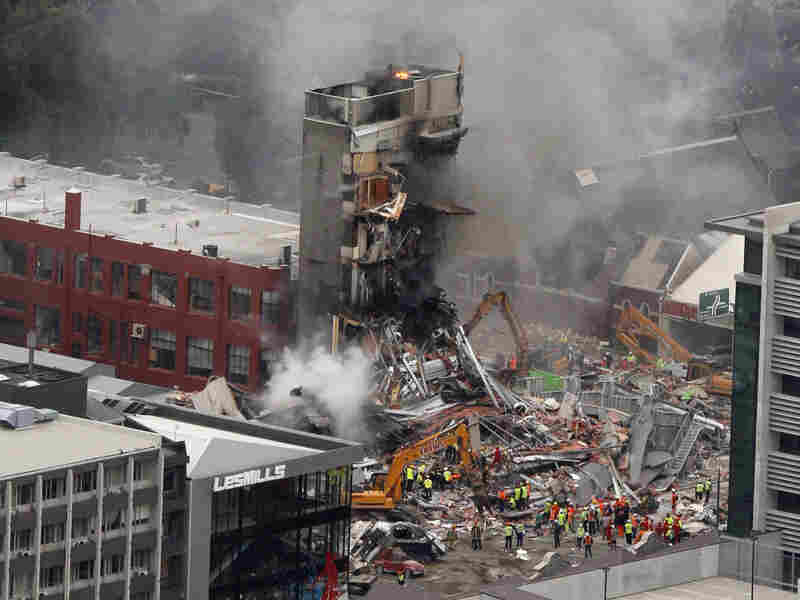 Rescue workers try to extinguish flames at a collapsed building in central Christchurch, a city of about 370,000 people. Mark Mitchell/AP hide caption 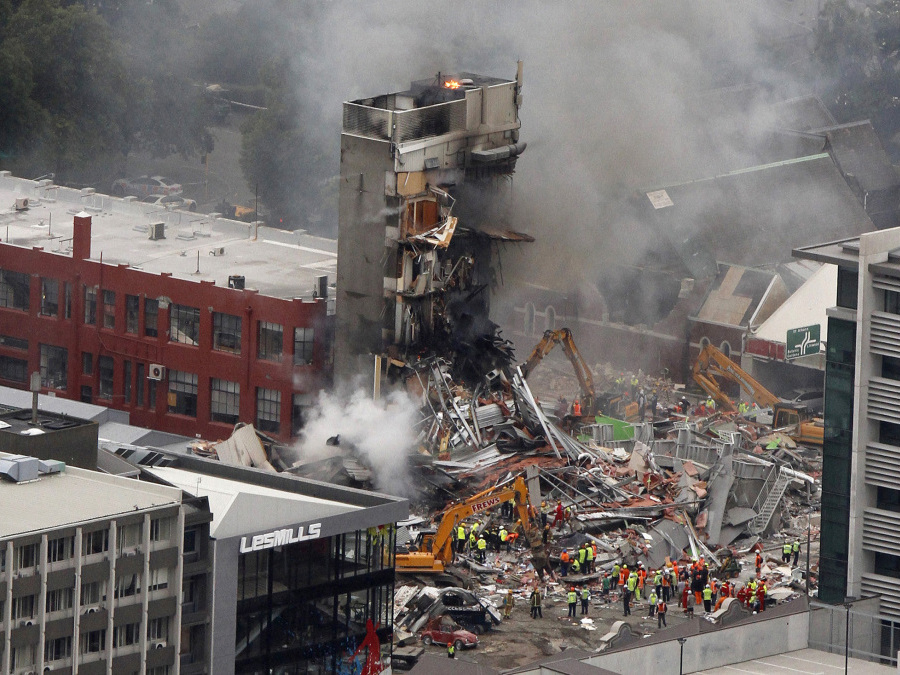 Rescue workers try to extinguish flames at a collapsed building in central Christchurch, a city of about 370,000 people.

Rescuers dug for people believed trapped in toppled office buildings in Christchurch, New Zealand on Tuesday, hours after a powerful earthquake struck at midday and killed at least 75 people.

At least 100 people were reportedly buried in rubble as teams worked through the night to try to reach them through slabs of crumbled concrete and twisted metal.

As night fell, thousands of people moved into temporary shelters at schools and community halls in Christchurch. Others, including tourists who had abandoned their hotels, huddled in hastily pitched tents and under plastic sheeting as drizzling rain fell, while the Red Cross tried to find them accommodation.

Swaths of the city were in shambles after the powerful quake toppled tall buildings and historic churches. The South Island city of about 370,000 people was still rebuilding from a magnitude 7.1 earthquake in September and another strong aftershock in December when the magnitude 6.3 quake struck Tuesday. Although the quake was weaker in magnitude than the one in September, it appeared to cause far more destruction.

It is just a scene of utter devastation. This may be New Zealand's darkest day.

Prime Minister John Key told a news conference on Wednesday that police had confirmed 75 deaths from the quake a day earlier, up from the previous total of 65.

Christchurch Mayor Bob Parker 300 people were listed as missing but cautioned that the number trapped in collapsed buildings was not known.

The spire of the city's well-known stone cathedral toppled into a central square, while video footage showed multistory buildings collapsed in on themselves, and others with walls that had fallen into streets strewn with bricks and shattered concrete.

Sidewalks and roads were cracked and split, while thousands of dazed, screaming and crying residents wandered through the streets as sirens blared. Groups of people helped victims clutching bleeding wounds, and others were carried to private vehicles in makeshift stretchers fashioned from rugs or bits of debris.

Christchurch Mayor Bob Parker declared a state of emergency and ordered people to evacuate the city center. Troops were deployed to help people get out and to throw up a security cordon around the stricken area, said Deputy Prime Minister Bill English.

The airport was closed, and Christchurch Hospital was briefly evacuated before it was deemed safe and patients were returned. Power and telephone lines were knocked out, and pipes burst, flooding the streets with water. Some cars parked on the street were buried under rubble.

The quake struck just before 1 p.m. local time, as the streets and businesses of Christchurch were teeming with activity. Key urged residents to evacuate the city, promising they'll be looked after. 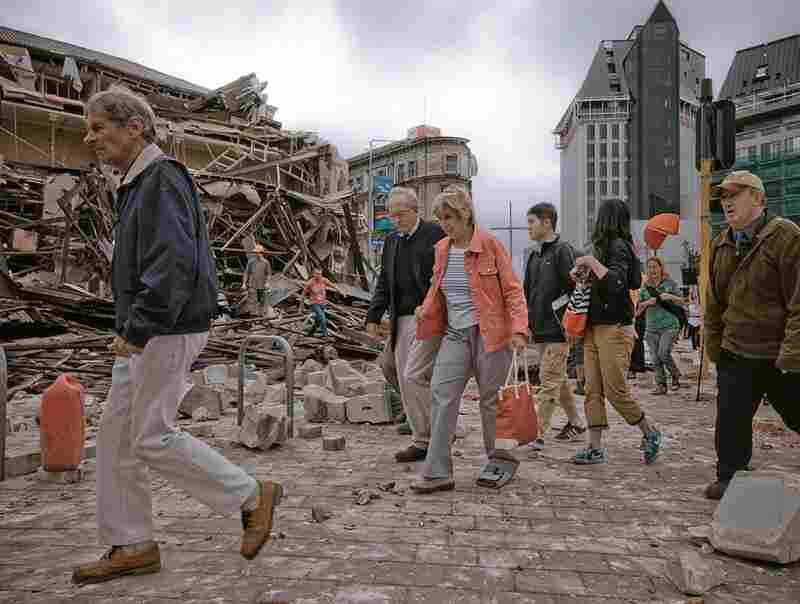 People walk through debris in the aftermath of a strong earthquake in Christchurch, New Zealand, Tuesday. The region is still recovering from a 7.1 quake in September. Logan McMillan/AFP/Getty Images hide caption 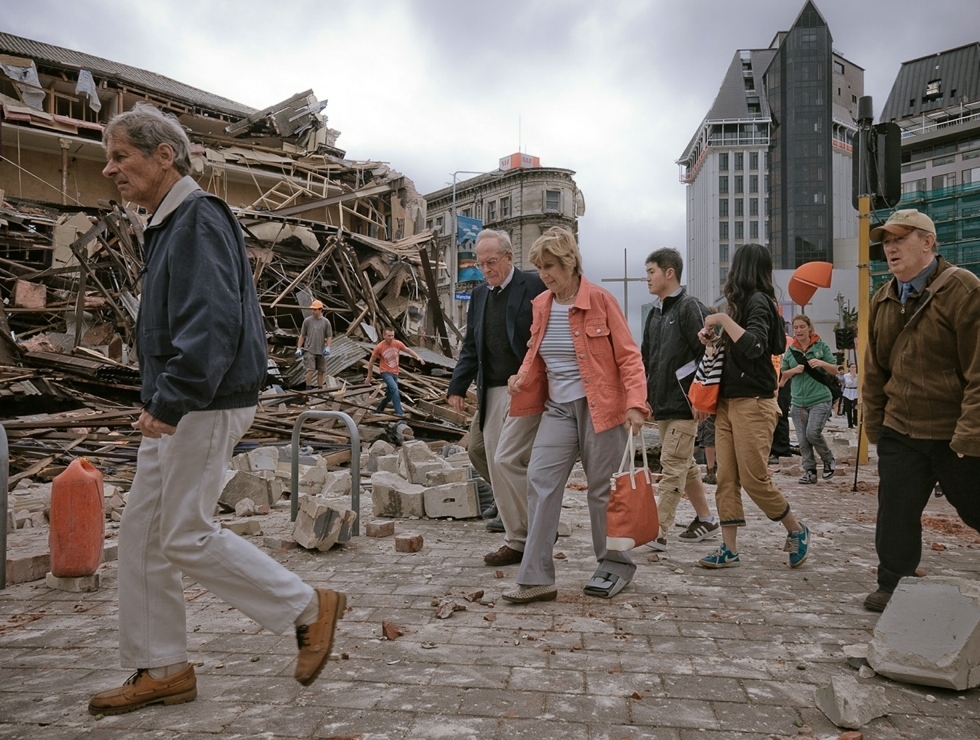 People walk through debris in the aftermath of a strong earthquake in Christchurch, New Zealand, Tuesday. The region is still recovering from a 7.1 quake in September.

Some people were stuck in office towers, and firefighters climbed extension ladders to pluck people trapped on roofs to safety. A crane lifted a team of rescuers on a platform to one group of survivors in a high-rise. Plumes of gray smoke drifted into the air at several points around the city from fires burning in the rubble.

Key held an emergency Cabinet meeting then rushed to the stricken city to observe the scene.

He said eight or nine buildings had collapsed, and that officials were working as fast as they can to free an unknown number of people who were trapped.

New Zealand police said in a statement that reports of fatalities included two buses that had been crushed by falling buildings.

Gary Moore said he and 19 other colleagues were trapped in their 12th-floor office after the stairwell collapsed in the quake. He did not know if people on other floors were trapped.

"We watched the cathedral collapse out our window while we were holding onto the walls," Moore said. "Every aftershock sends us rushing under the desks. It's very unnerving, but we can clearly see there are other priorities out the window. There has been a lot of damage and I guess people are attending to that before they come and get us."

The multistory Pyne Gould Guinness Building, housing more than 200 workers, collapsed, and an unknown number of people were trapped inside. Television pictures showed rescuers, many of them office workers, dragging severely injured people from the rubble. Many had blood streaming down their faces. Screams could be heard from those still trapped.

The U.S. Geological Survey said the temblor was centered 3 miles from the city at a depth of 2.5 miles. Two large aftershocks — one magnitude 5.6 and another 5.5 — hit the city within two hours, and officials warned people to stay away from damaged buildings because of the danger of further collapses.

"When the shaking had stopped, I looked out of the window, which gives a great view onto Christchurch, and there was just dust," said city councilman Barry Corbett, who was on one of the top floors of the city council building when the quake struck. "It was evident straightaway that a lot of buildings had gone."

A search and rescue team was being flown in from Australia to help in the recovery, and Australian Prime Minister Julia Gillard said she had offered Key any other support he requested.

The USGS said the latest quake was part of the "aftershock sequence" following the magnitude 7.1 earthquake on Sept. 4 last year. That quake wrecked hundreds of buildings and inflicted an estimated $3 billion in damage, but caused no deaths.

A strong aftershock in December caused further damage to buildings. The city, considered a tourist center, was still rebuilding from those quakes when Tuesday's temblor hit.

The USGS said the latest quake hit "significantly closer to the main population center of Christchurch" than the September quake, which was centered 25 miles west of city.

"The critical issue with this earthquake was that the epicenter was at shallow depth under Christchurch, so many people were within 6 to 12 miles of the fault rupture," said Gary Gibson, a seismologist at Australia's Melbourne University.

"Its effect depends on how close it is, and ground shaking will be severe within 10 to 20 kilometers of the rupture," he said.

Stuart Cohen in Sydney and The Associated Press contributed to this report.