Accessibility links
The Surprising Tale Of Two Sexy, Titian Masterpieces The stories behind the sensuous Renaissance paintings are almost as titillating as the art itself. They were created for Philip II, the pious, Catholic king of Spain, and in a journey spanning centuries of war and revolution, have traveled from Spain to Scotland and now, briefly, to the U.S. 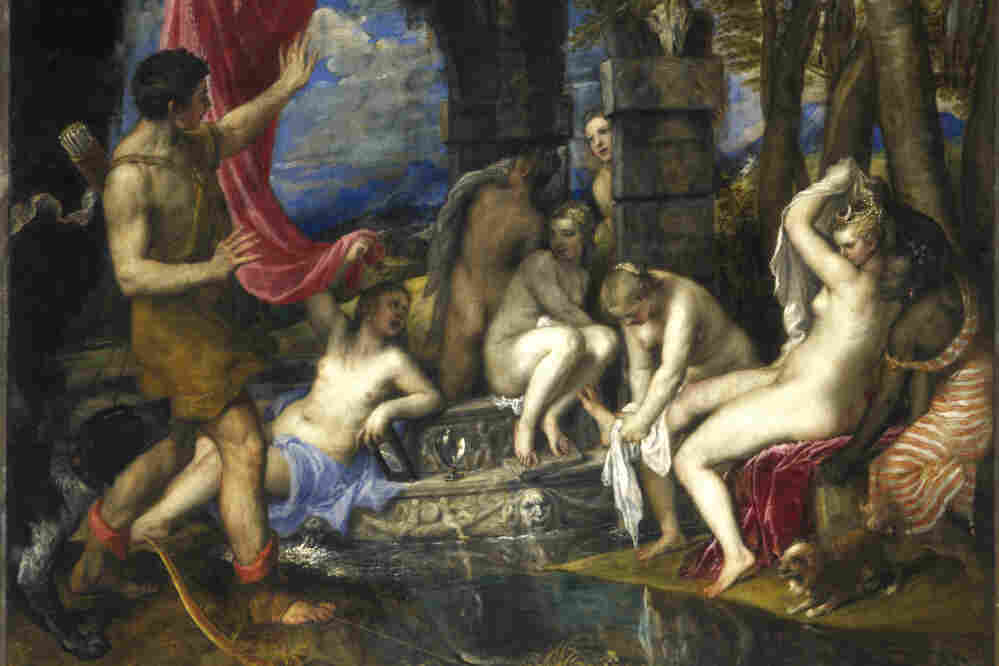 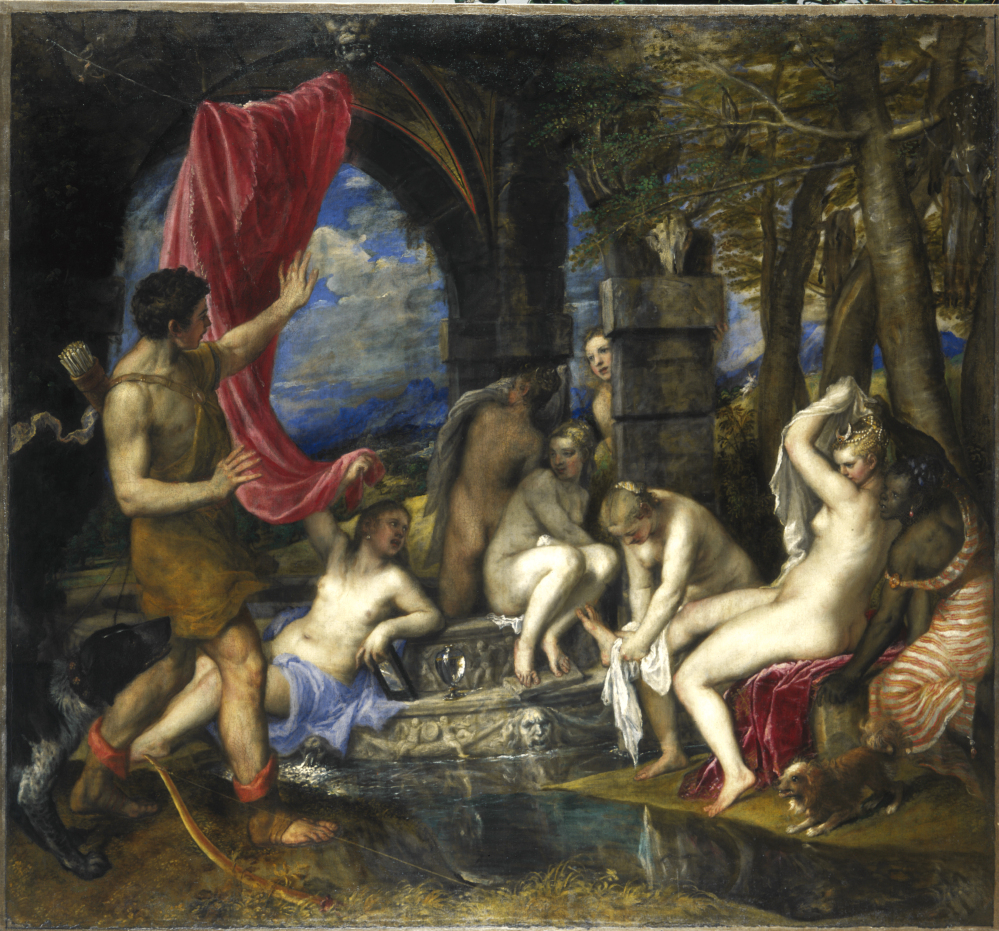 Diana and Actaeon (1556-59): Italian painter Titian depicts Actaeon, a mortal hunter, who accidentally encounters Diana, goddess of the hunt, as she bathes. Click "Enlarge" to see the full painting.

Who would have guessed that Philip II, the pious, Catholic king of Spain, had a supersexy art collection? But his Renaissance works have it all — nudity, religion, violence and mythology. Featuring huge, sensuous paintings by masters such as Titian, Tintoretto and Veronese, Philip's collection from the National Galleries of Scotland is currently on a U.S. tour.

How this collection traveled from Spain to Scotland — a journey spanning centuries of war and revolution — is a story almost as titillating as the art itself.

Two paintings are at the heart of the collection, says John Leighton, the director-general of the National Galleries of Scotland — Diana and Actaeon and Diana and Callisto.

Based on Ovid's tales of the goddess, both feature the scantily clad Diana and her retinue in scenes filled with violence, nudity and even some bloodthirsty dogs.

Titian's Diana and Actaeon depicts the story of an unfortunate hunter, Actaeon, who accidentally surprises Diana as she is bathing. "In a moment of fury she transforms the hapless hunter into a stag, and he is hunted down by his own hounds," Leighton says.

Even today, 450 years after they were created, contemporary artist Lucian Freud describes them as the most important paintings anywhere in the world, says Leighton.

"They were painted by Titian at the height of his powers in the 16th century, when he was without any doubt the most influential, most famous painter anywhere in Europe," Leighton says.

Not only was Titian in his prime, but his masterpieces were painted for the world's most powerful monarch of the time, Philip II. The Spanish king, who famously launched the Spanish Armada in a doomed attack on Queen Elizabeth I of England, was also an extremely pious man. Supported by the power of the Catholic Church, Philip ruled by divine right, making the sensual nature of the Titians even more extraordinary. 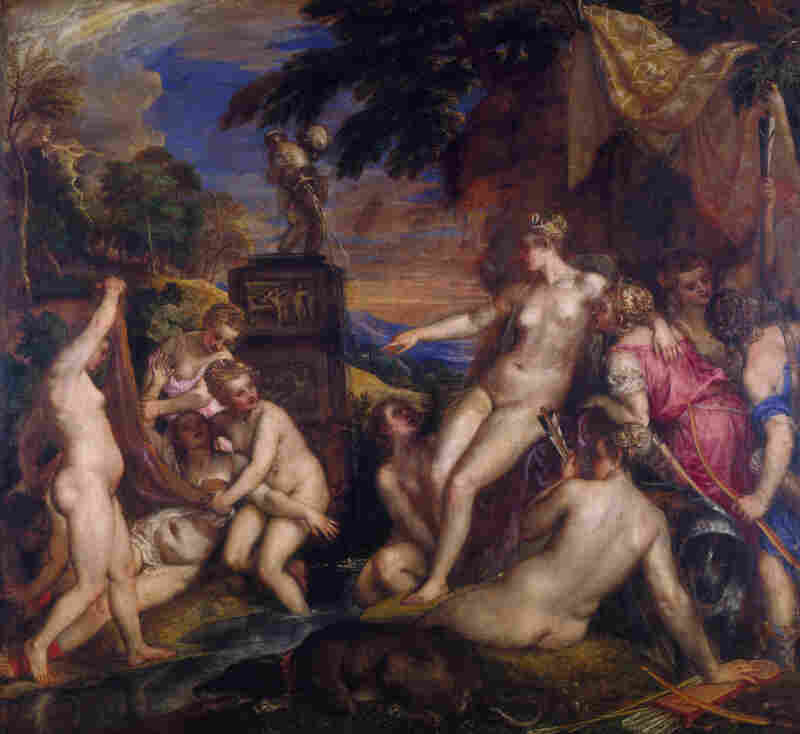 Titian's Diana and Callisto (1556-59) depicts Diana as she discovers that Callisto is pregnant with the child of Jupiter, King of the Gods. Minneapolis Institute of Arts hide caption 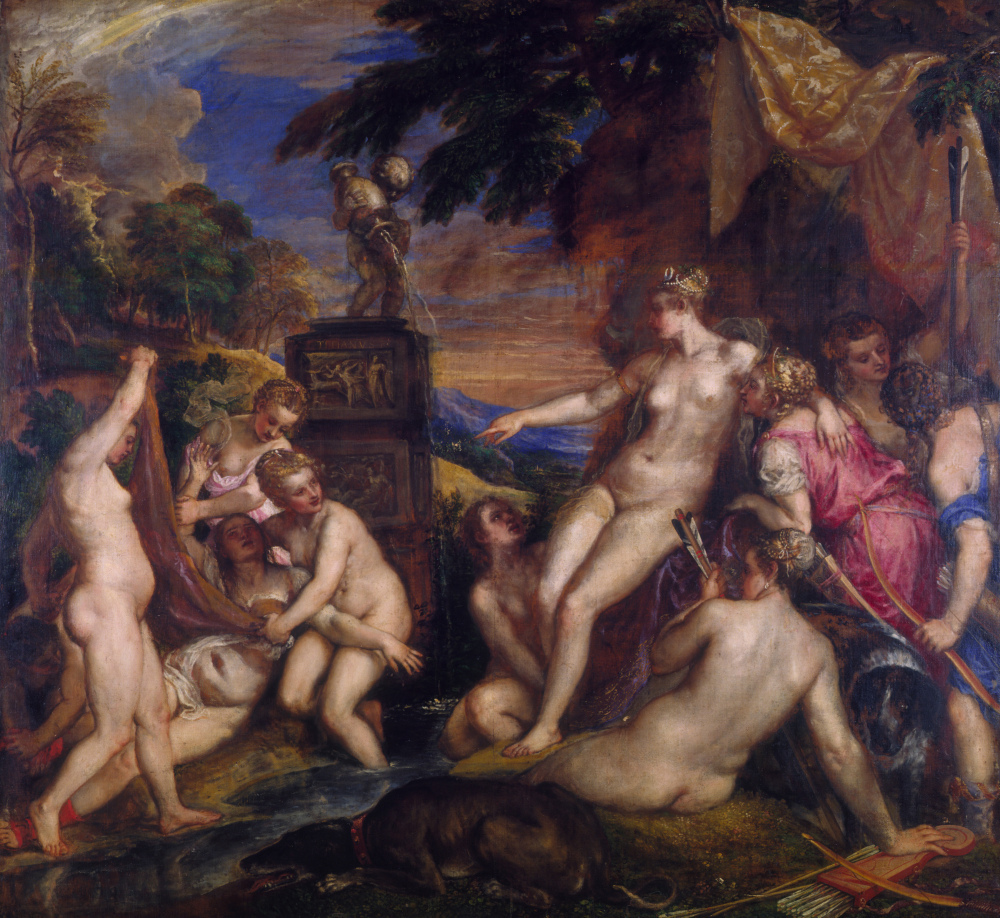 Titian's Diana and Callisto (1556-59) depicts Diana as she discovers that Callisto is pregnant with the child of Jupiter, King of the Gods.

By the 1550s in Spain, the counter-Reformation was in full swing. "Even a hint of nudity is something to be frowned upon, and here we have the king himself commissioning what are really essentially very sexy pictures," Leighton explains.

Although few people other than Philip would have seen the masterworks, they were soon swept up in the tide of European political history. After Philip's death, they were given to France as part of a diplomatic gift and entered the collection of the Duc d'Orleans. But when the duke ran afoul of the French Revolution, he lost his head and the Titians along with it.

The paintings then made their way to London, where they sparked another revolution.

"The impact of these paintings, and particularly the Titians when they arrived in London, was tremendous," says Patrick Noon, curator of paintings at the Minneapolis Institute of Arts, where the paintings are currently on display. "The artists had never seen anything like it. Most British artists hadn't been overseas, or over the channel, because of the French Revolution."

In fact, the golden age of British painting, led by artists such as John Constable and J.M.W. Turner, owes a huge debt to this influx from France, Noon says.

The collection remained in London on public display until World War II, when it was moved out of the city to escape German bombing. Although the paintings survived the Blitz, the mansion where they had hung did not. Their owner moved the collection, along with his family, to just outside Edinburgh, but Leighton says the new house just wasn't big enough.

"There's a very nice letter in our archives where the Duke of Sutherland writes to the gallery saying that he finds himself in the embarrassing position of not having enough room," says Leighton. "Would we be prepared to take some pictures by Rembrandt, Poussin, Titian, Raphael on loan?" the duke had asked.

Unsurprisingly, the gallery enthusiastically accepted his offer and as a result, the people of Scotland have had access to King Philip's private pictures since 1946. Anyone strolling along Princes Street in Edinburgh can step into the National Gallery and feast their eyes on the Titians for free.

But there's another recent twist in the story. A few years ago, the current Duke of Sutherland was advised to diversify his assets, and he told the National Galleries that wanted to sell Titian's Dianas.

"I think it would be safe to say this was a moment of crisis for us," says Leighton.

But the duke did not go straight to the market. He offered to sell the paintings to the nation for 50 million pounds — or about $80 million — each. Given the high prices that some paintings have recently brought in at auction, the duke's asking price was actually reasonable, says Leighton.

"Fifty million pounds is probably well below half-price, which in anybody's terms is a bargain," he explains.

With the help of the National Gallery in London, the National Galleries of Scotland were able to buy Diana and Actaeon in 2009. The gallery has until next year to raise the money for the second Titian, Diana and Callisto, but the recent economic downturn has thrown a wrench into their plans.

The Scots are not discouraged, though. To raise awareness about the paintings, they have sent the collection on its first tour of the United States. After traveling from Atlanta to Minneapolis and Houston, they will return to Scotland, where fundraising will begin in earnest. Raising the money will be a difficult challenge, Leighton admits, but doing anything otherwise would be unthinkable.