Accessibility links
Cell Phone Radio Waves Excite Brain Cells Radio waves from cell phones affect the metabolism of the brain, but it has nothing to do with cancer and there's no evidence they're harmful, a new study finds. A brain scan measured a 6 to 8 percent increase in sugar consumption by brain cells, but only in areas of the brain close to the antenna. 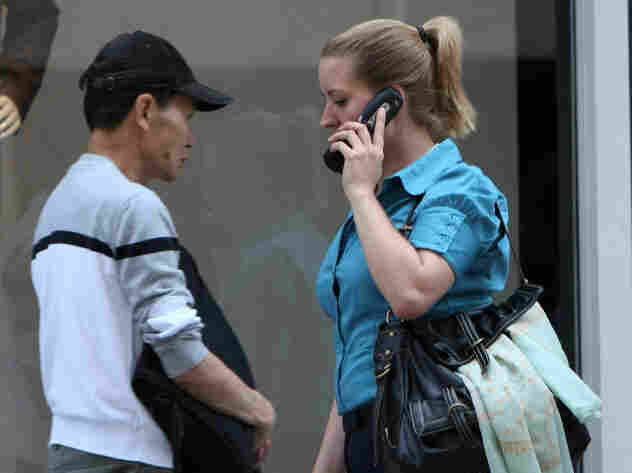 A new study finds that radio waves from a cell phone can affect the metabolism of brain cells, though there is no evidence that the effect is harmful. Here, a pedestrian talks on her phone on a street in San Francisco. Justin Sullivan/Getty Images hide caption 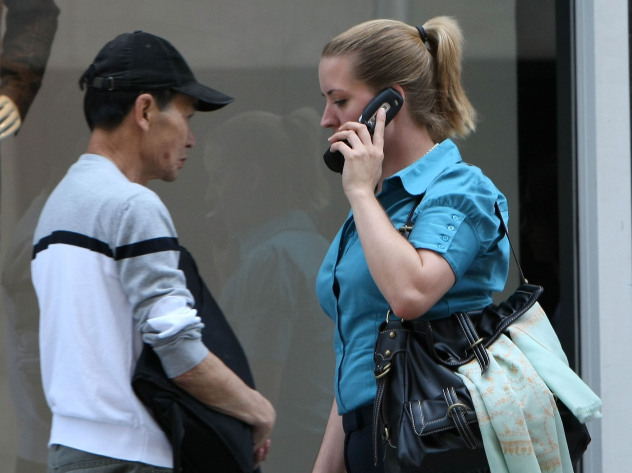 A new study finds that radio waves from a cell phone can affect the metabolism of brain cells, though there is no evidence that the effect is harmful. Here, a pedestrian talks on her phone on a street in San Francisco.

Radio waves from a cell phone can affect the metabolism of a person's brain, according to a study in the Journal of the American Medical Association.

But the effect has nothing to do with cancer, and researchers say there's no evidence that the increase in metabolism is harmful. The human brain relies on electrical signals to communicate, so it makes sense that the electromagnetic energy that a cell phone puts out might affect brain cells, researchers say.

"I'm seeing many of my relatives and friends spending hours on their cell phones," she says. "And the question in my brain is, 'Could this have any effect?' "

Volkow knew that some MRI scanners produce electrical and magnetic fields powerful enough to cause brain cells to consume more energy, in the form of glucose.

"Glucose metabolism goes up when you activate your brain, when you're thinking, when you're speaking," she says, "because you need the energy source in order for cells to function."

Volkow wanted to know whether the electromagnetic fields produced by cell phones were strong enough to affect glucose metabolism in brain cells the same way a scanner can. So she and a team of researchers studied 47 people.

The team used two cell phones for each participant — one on the right ear, one on the left. The scientists muted the sound on the phones to make sure it wasn't the sound of someone talking that affected parts of the brain. The participants couldn't even tell whether the cell phones were on.

Then the researchers activated the phone on one side and used a PET scanner to measure how much glucose was being consumed by brain cells. Volkow says a 50-minute call clearly boosted brain metabolism.

"There was an overall increase, approximately 6 to 8 percent," she says. "But only on the areas of the brain that were close to the antenna."

Volkow says that level of increase in brain metabolism is not terribly dramatic — studies have shown that just opening your eyes can produce a much greater change in brain cells that process visual information. And scientists say it's hard to know what to make of the change.

"Based on this finding I cannot say, 'Is this bad that you're increasing glucose metabolism?' Or 'could it be good?' " Volkow says.

Other researchers agree there's no clear message from the result.

"There are many questions that are now raised from this very, very important study," says Lennart Hardell, a cancer researcher at University Hospital in Orebro, Sweden, and the co-author of an editorial accompanying the study. "What about long-term use, and what about children and young persons?"

Hardell, who has previously suggested a link between cell phone use and brain cancer, says the finding doesn't necessarily strengthen his case, because there's no direct link between increased brain metabolism and cancer. But he says it's still possible researchers will find an indirect one, perhaps involving hormonal changes or the production of molecules known as free radicals in the brain.

Such a link is unlikely, says Steven Novella, a neurologist at Yale, because nearly everything that happens to us affects cell metabolism.

"If you go into a warmer room your metabolism will increase," Novella says. He notes that the authors of the new study wondered whether the increase in brain metabolism could have been from the heat generated by a cell phone, though they concluded that was unlikely.

Several large, international studies have found no connection between cancer and cell phone use, Novella says, and studies haven't found any other health risks from cell phones' electromagnetic radiation either.

So if there is any risk from cell phones, Novella says, it must be very small. But he says it is important to keep looking for health effects from a technology that's used by so many people, and there still isn't much research on children and cell phones, he says.

So parents may want to limit cell phone use by their children, Novella says, adding that people who just want to be cautious can use a land line when possible, buy a headset for their phone or just use the speakerphone function.

Those steps are highly effective, he says, because exposure to electromagnetic radiation decreases dramatically if you hold a phone "away from your head rather than up against your ear."