Accessibility links
General Remembers Her 'Different' Military Days Wilma Vaught was one of the first women in the U.S. military to be addressed as "general." Women's officer training in the 1950s included lessons on how to put on makeup. Women didn't wear battle dress uniforms, or fire guns. Today, she says, "it's a different military." 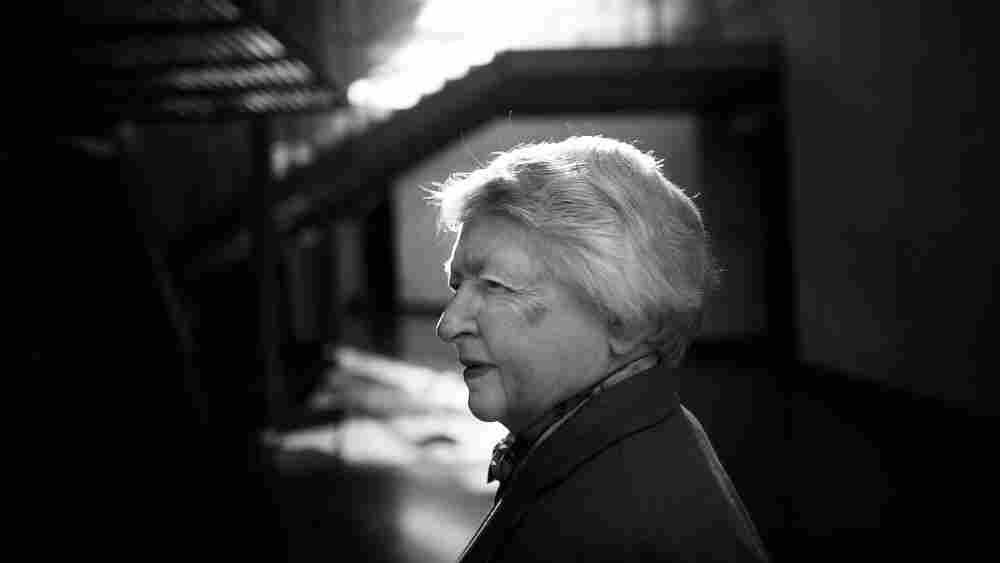 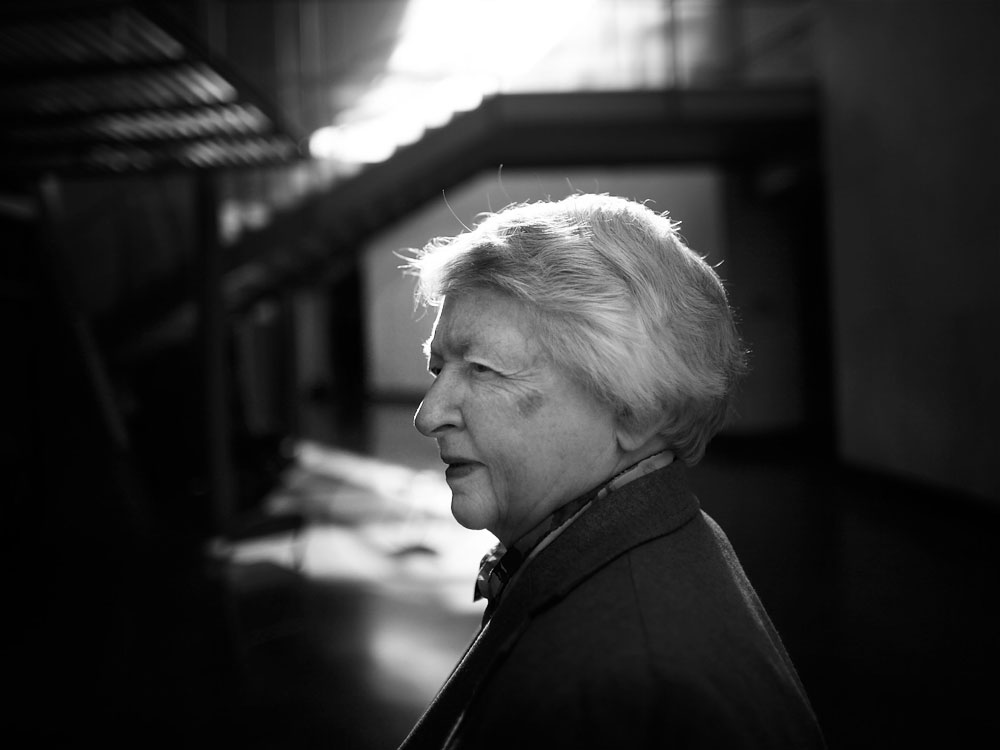 When Wilma Vaught joined the Air Force in 1957 and started her first day of training, she was unsure about a lot of things, even the basics.

"I was trying to find the building I was supposed to go to, and I saw someone walking along in uniform — a woman — and she saluted me and I didn't know what to do. I didn't know how to salute. It was a very embarrassing thing," Vaught says.

The one thing she did know is that she wanted to be in charge. "I wanted to lead," says the now-retired brigadier general.

And she has been doing just that ever since.

I met Vaught at the Women in Military Service for America Memorial in Arlington, Va. It's a museum with exhibits marking women's contributions to the U.S. military. There are all kinds of old photos and uniforms on display, and quotations from service women etched into the ceiling, including one from an Army nurse during World War II: Let the generations know that women in uniform also guaranteed their freedom. That our resolve was just as great as the brave men who stood among us. ... That the tears fell just as hard for those we left behind us.

Vaught is the president of the foundation that runs the memorial. On this day, she's dressed in a dark suit, sensible shoes, her silver hair cropped short. She looks the part.

The museum, she says, is "a place where we build the story of what women have done — what they've accomplished, what they went through to get there."

'How To Be Charming'

It's a story she and others in her generation helped write. Vaught joined the military right after the Korean War, about 10 years after President Harry Truman signed the Women's Armed Services Integration Act of 1948. That law opened the services up to women as permanent, regular members but with strict conditions:

Part 1: Women In War: 'I've Lived Out There With The Guys'

If a woman got pregnant, she had to be discharged. Each service had to limit the number of women to 2 percent of their overall force. And women weren't allowed to serve in combat or command men.

"When I came into the Air Force, I couldn't hope to be a general because the law said women couldn't be generals," Vaught says

This was partly because of popular perception at the time. According to Vaughn, when the congressional committees were putting together the Armed Services Integration Act, several of the members brought up the fact that women would be in their 50s about the time they would be considered for admiral or general officer. And they realized that around that time women would be going through menopause and might make, as Vaught put it, "irrational decisions."

As a result, women in the military could only be promoted so high. Still, there was recognition that if women were going to be in the service, they needed officers who could lead them.

It was the 1950s, a time when women were expected to have a husband and children. But Vaught wanted a career — in the military. But the military wasn't really sure how to be a coed force.

Vaught went through a special officers training course designed explicitly for women. As Vaught describes it, the course was a bit different from the men's officer training. "We had training on how to sit, how to put on makeup. We didn't have as aggressive physical training as the men did," she says.

Was it strange that female Air Force officers were being trained how to put on lipstick and eye shadow? "Well, that's the way it was. All the services were doing this at that time," she says. "We had to learn how to be charming and attractive. That's the way it was." 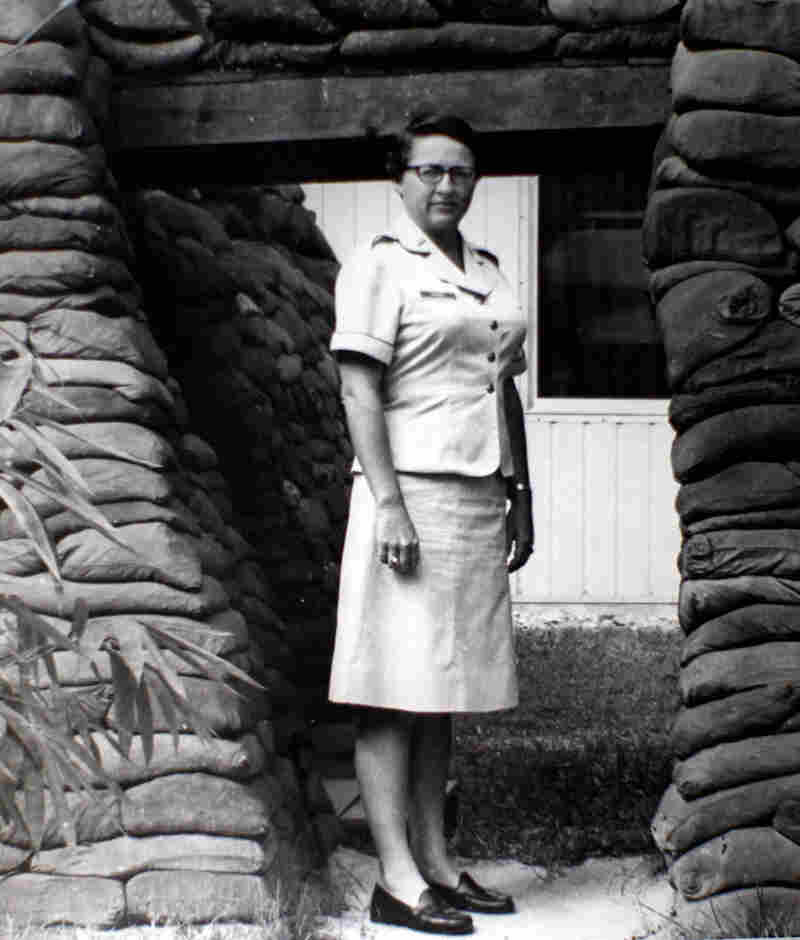 Wilma Vaught served in Vietnam for a year. "I spent the whole year wearing a skirt," she says. "You don't see that today. They're in their battle dress uniforms." Courtesy of Wilma Vaught hide caption

There were other frustrations.

Vaught remembers that there were jobs on the flight line that women could actually do better than men because they had small hands that could get into small spaces. But, she says, if a woman got trained for one of those jobs and assigned there, they would "put her at a desk job inside to handle the work orders or something instead of sending her out on the flight line to do what she had been trained to do."

A few years later, the Vietnam War changed things for women. Tens of thousands of men were drafted to the military, and thousands of women signed up voluntarily. The military's policy kept women out of the combat zone until the forces were stretched so thin that the policy was reversed. In 1967, the military lifted its cap on the number of women who could serve and decided that women could serve as general officers.

At that point, Vaught was sent to Saigon.

We're sitting in the exhibit hall at the women's military memorial, and she shows me a photo of herself back then, standing in front of the small office building where she worked. She thinks about how different her experience in Vietnam was compared with what women are doing today in Iraq and Afghanistan.

"I served in Vietnam for a year. But I served in downtown Saigon," Vaught says. "I spent the whole year wearing a skirt. You don't see that today. They're in their battle dress uniforms."

Vaught broke her fair share of glass ceilings. She was the first woman to deploy with an Air Force bomber wing. She was promoted to brigadier general in 1980, and when she retired five years later, she was only one of seven female generals or admirals in all the armed forces.

But in close to 30 years of military service, she never had to fire a gun. In fact, she got her brother-in-law to teach her how to use one because the Air Force wouldn't. But today, hundreds of thousands of women have served in wars with no clear front lines, often caught up in direct combat. Vaught wonders aloud, "If I were in the military today, would I be able to do these things? I would like to think I would, but I don't know, because, you know, the challenges are just so great. It's a different military. It really is."

Maybe so — but it's a military now filled with women — because Vaught wanted not just to serve but to lead.