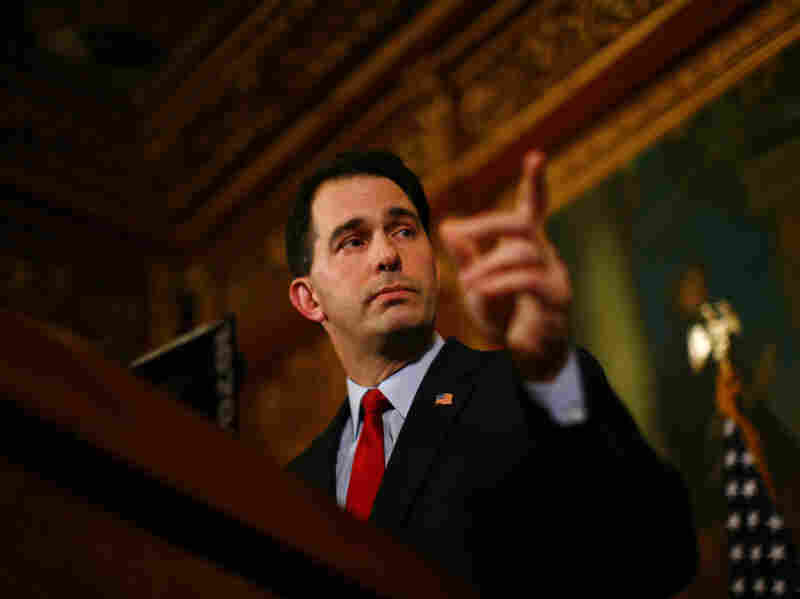 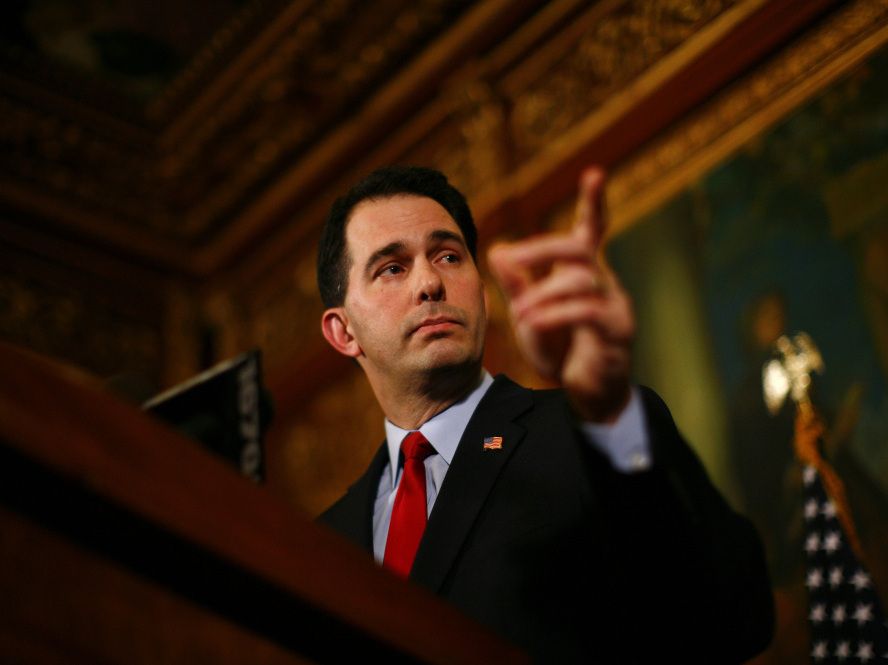 Republican Gov. Scott Walker speaking at a news conference in Madison, Wisconsin on Monday. With state Democrats still in hiding over the proposed legislation to restrict collective bargaining for public workers, Walker urged Democratic lawmakers to return to the capitol to conduct business.

Wisconsin Governor Scott Walker's budget proposal has gotten a lot of attention for what it would do to the state's public employee unions. And rightly so. If Walker gets his way, state workers will lose virtually all power to negotiate over compensation and the unions themselves will become far weaker. As Greg Sargent noted on Monday, a Walker victory would likely embolden Republican governors in other states, many of whom are planning their own assaults on public employees.

But that's not all Walker's budget proposal would do. It appears that Walker also wants to weaken the state's Medicaid program, known as Badgercare. And his proposed method for accomplishing this is eerily similar to his proposed method for emasculating the public employee unions. Rather than simply trying to reduce what the state government spends on Badgercare, Walker proposes to change the way the state government operates it, in a way that would allow him to change the program with virtually no legislative oversight.

You can read the full story in the progressive publication Cap Times. (One of its writers, Shawn Doherty, seems to be one of the very few people to have taken notice.) But here's the short and slightly simplified version, as best as I can determine based on media accounts and conversations with advocates in the state:

Under Walker's proposal for Medicaid, his Secretary of Health could use "emergency" powers to redefine some of the program's most basic parameters: Whom it enrolls, what premiums and co-payments in charges, etc. Normally, these sorts of decisions would require assent of the full legislature. But, according to Jon Peacock of the Wisconsin Council on Children and Families, under Walker's proposal the Secretary of Health would need approval only from a joint legislative committee whose membership is heavily tilted towards the majority party. (The Center has more information about the proposal at its website.)

Because Medicaid is a federal-state partnership, federal guidelines do impose some limits on what Wisconsin could do. The state could not, for example, stop offering coverage to children. And in order for Walker's change to take effect, I gather, the federal government would have to issue a waiver. Typically the feds issue waivers only when states show they can improve or bolster coverage, not when they are looking to weaken it. But Walker's budget effectively puts a gun to Washington's head: If the state doesn't get permission to change the program in the way he wants, under Walker's proposal, it would simply reduce Medicaid to the bare minimum permissible under federal law.

To be clear, Wisconsin's Medicaid costs really do represent a crisis right now. And in an ideal world, the federal government would help by doing what it's done for the last two years: Provide states with temporary financial assistance, in recognition of the fact that the slow economy both increases demand for the Medicaid while reducing state resources. But make no mistake: Walker and his current Secretary of Health, Dennis Smith, have made no secret of their antipathy for Medicaid. Smith, who came to Wisconsin from the Heritage Foundation, has proposed that states withdraw from the program altogether rather than go along with expansions required under the Affordable Care Act. (I'll have more to say about the states and Medicaid sometime soon; like everything else about Medicaid, the issue is pretty complicated.)

If the assault on Badgercare succeeds, tens of thousands of needy Wisconsin residents are likely to lose access to health care. That's disturbing for its own sake. But it would be particularly sad, or at least ironic, given the program's history. Badgercare has traditionally been among the nation's more innovative and generous Medicaid programs — in part because Tommy Thompson, the state's Republican governor during the 1990s, had expanded coverage in order to bolster his state's welfare reform experiment. Thompson reasoned, correctly, that people would be more likely to leave welfare for work if it didn't mean losing health insurance.

Thompson was a Republican who would go on to serve as Secretary of Health and Human Services under President Bush. But Thompson was more of a "compassionate conservative" — somebody who showed genuine interest in helping vulnerable people, albeit through different means than liberals generally preferred. Walker is a different kind of Republican and a different kind of conservative. If he's at all interested in what happens to his less fortunate constituents, he has yet to show it.

(Thanks to Rabbi Robert Tabak, staff chaplain at the Hospital of the University of Pennsylvania, for alerting me to this story.)

Update: In my initial round of research, I somehow missed David Wahlberg's excellent coverage of this issue in the Wisconsin State Journal. His Sunday story outlined some of the specific change the Walker administration might try to implement:

"The state could make it harder for all people to enroll in Medicaid, requiring more paperwork along with the more frequent income reviews. ... Among other steps the state could take is ending optional Medicaid services, which account for about 40 percent of costs. They include physical therapy, speech therapy, optometry services, dental care and prescription drugs.

Another possible change is limiting who can get birth control services, as Wisconsin provides free birth control pills, vasectomies and other contraceptives to more people than required. ... Yet another alternative is rationing care — ranking services and refusing to cover those deemed least necessary, as Oregon does. The Wisconsin Medical Society has proposed the model instead of removing people from Medicaid or paying doctors less."

Of course, that's assuming Walker gets the latitude he needs to impose those changes. If he doesn't? Then, under Walker's proposal, more than 50,000 people would lose coverage altogether.