Accessibility links
How Many Cooks?: Counting Up The Many Producers Of 'The King's Speech' NPR's Cory Turner asks the question: Who are all those people credited as producers on The King's Speech, and what do they tell us about what producers actually do? 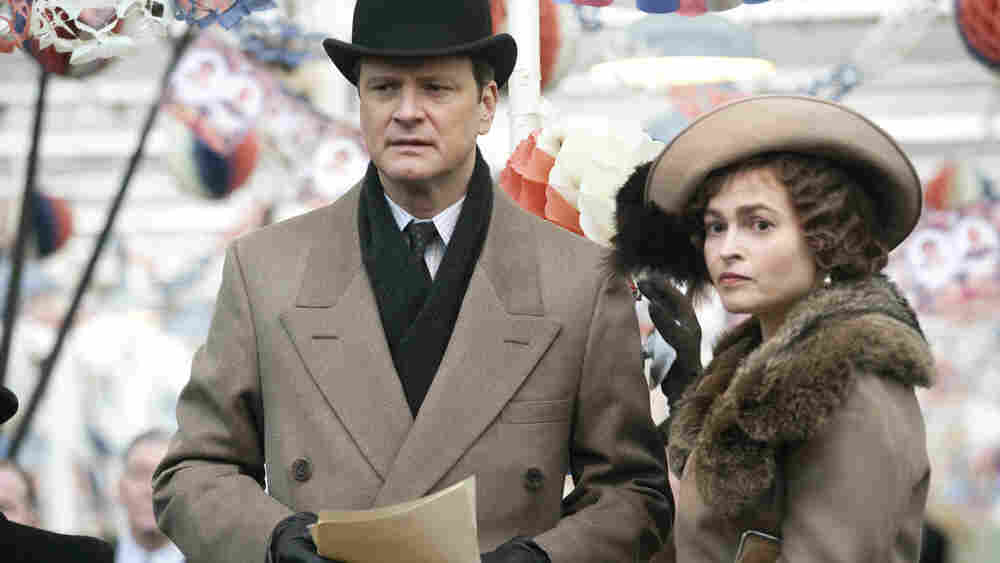 It's become a familiar sight: names, flashing across the screen one after the other at the beginning of a film. Co-producers, line producers, associate producers, executive and co-executive producers. This year's 10 best picture nominees for the Academy Awards have 110 producers among them — and trying to decipher who actually made these movies left me feeling like Laurence Olivier as Marcus Licinius Crassus, on the hunt for the real Spartacus in a sea full of voices clamoring for credit.

I wanted to figure out why these films had so many producers, but 110 seemed like too many to explain all at once, so I decided to focus on just one film: The King's Speech. The best picture nominee began as a stage play written by David Seidler, whose agent, Joan Lane, gave it to a pair of enterprising young movie producers: Simon Egan and Gareth Unwin.

When I talked to Unwin about the process of making the film, he told me that Lane wrangled actor Geoffrey Rush into the mix as the therapist behind the king's stuttering speech by sending a copy of the stage play to his house, where it awaited him on his doormat one morning as he came downstairs for breakfast. Rush read and liked the script, and let the two producers put his name on it. For that, he's not only in the credits as an actor, but also as an executive producer. And so, The King's Speech had itself three producers.

But the film had a 15 million dollar budget, and Unwin needed help raising that cash. He brought in Iain Canning and Emile Sherman as producers four and five; those two became lead producers, and will join Unwin on the stage if The King's Speech wins a Best Picture Oscar.

Canning explained to me the major roadblock in getting this particular film off the ground: the fundraising all occurred during the financial crisis, when finding financial support for dramatic films was tough, because they were perceived as more difficult to sell from the commercial audience perspective. Luckily, Geoffrey Rush's involvement in the film attracted a few more backers — including Mark Foligno and partner Deepak Sikka. Those two put in a small piece of the budget, and in return got executive and co-executive producer credits. For those of you counting at home, that makes 7.

To sift through the rest of the financing offers coming in, the producers of The King's Speech hired Libby Savill, who works as an entertainment lawyer advising people trying to make movies. Among the project's suitors was The Weinstein Company. The King's Speech must have seemed to Harvey Weinstein and his team like a chance to rebound from their wilderness of bad choices and bad movies from the past few years, and offer a return to making small, award-winning movies. So Harvey and his team flew to Savill's offices in London, where they parked themselves there until they convinced her to let them become backers, Savill told me.

"I know them incredibly well, so I know the modus operandi, but it's incredibly effective, actually," she said of their persistence.

Harvey and Bob Weinstein got themselves executive producers' credits, and then there were nine. And for her trouble, Libby Savill got a co-executive-producer credit. If you're thinking that after 10 producers and a big financial commitment from the Weinsteins that The King's Speech was a go, you're wrong. Ultimately, they needed five more producers to make their movie, bringing our grand total to 15.

There haven't always been this many producer's names in the credits, though. I talked to Larry Turman, producer of a little film called The Graduate, about how many people were necessary to make that movie: "One person, moi, me alone," he says. Turman optioned the novel with his own money, then raised outside financing when the Hollywood studios all said no.

"There's been a slow but inexorable devaluation of producing," Turman says.

Mark Gordon agrees. Gordon was one of eight producers on Saving Private Ryan, and is the co-president of The Producers Guild. He says he wishes that all the people giving financial backing for a film wouldn't take credit, but understands the need behind the excess of producers. Last year, he made a smaller film called The Messenger and it required 13 producers.

"Because that movie was cobbled together financially, that was the price that had to be paid to get the movie made," Gordon explained.

In other words, it's often true that the bigger the movie, the fewer the producers. That's why Toy Story 3 has three producers, and The Kids Are All Right needed 20. The allure of getting your name on a movie has become a kind of bait to lure investors to movies that big studios just won't touch — a lesbian family dramedy, for example.

To be fair to producers who do more than write a check, Gordon and The Producers Guild are working on a system that would make it clearer to audiences who did the heavy lifting. But in the meantime, we're left with 10 very good movies up for Best Picture, 110 producers, and one nagging question: does it matter how many people take credit for a good movie, as long as the movie gets made?

Unwin has his own perspective on that:

"It's about getting that film into production, getting it made, and getting it as good as you possibly can. And, you know, whether that's from the toil of one person or fifty then...we're a results based industry, as they say."