Accessibility links
Anti-Gadhafi Forces Set Up Provisional Government In the eastern Libyan city of Bayda, a new government is being formed. As forces loyal to Libyan President Moammar Gadhafi reportedly held on to control of the capital city of Tripoli, the eastern part of the country is in the hands of the rebels, who are now trying to organize themselves. 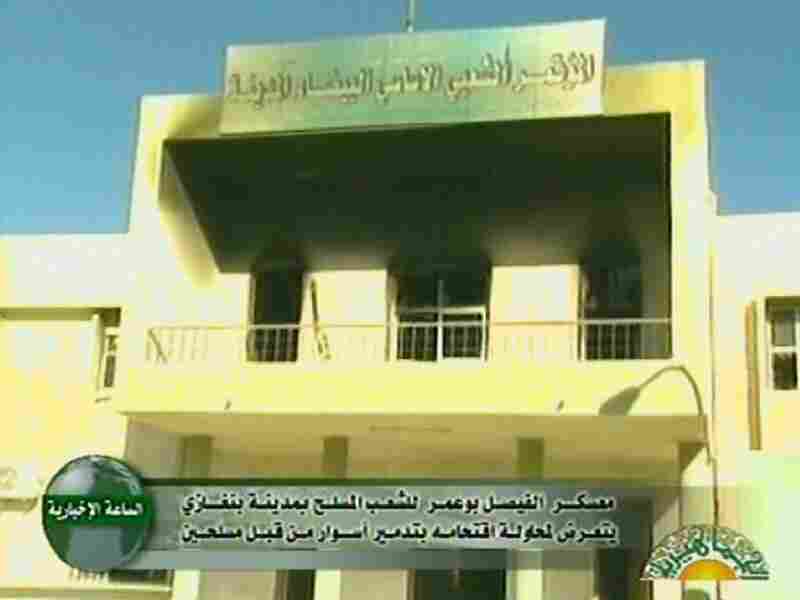 An image broadcast on Libyan state television on Sunday shows damage caused by fire to the local council building in the eastern city of Bayda. The city is now in the hands of anti-Gadhafi rebels who are forming a provisional government. Libyan TV/AFP/Getty Images hide caption 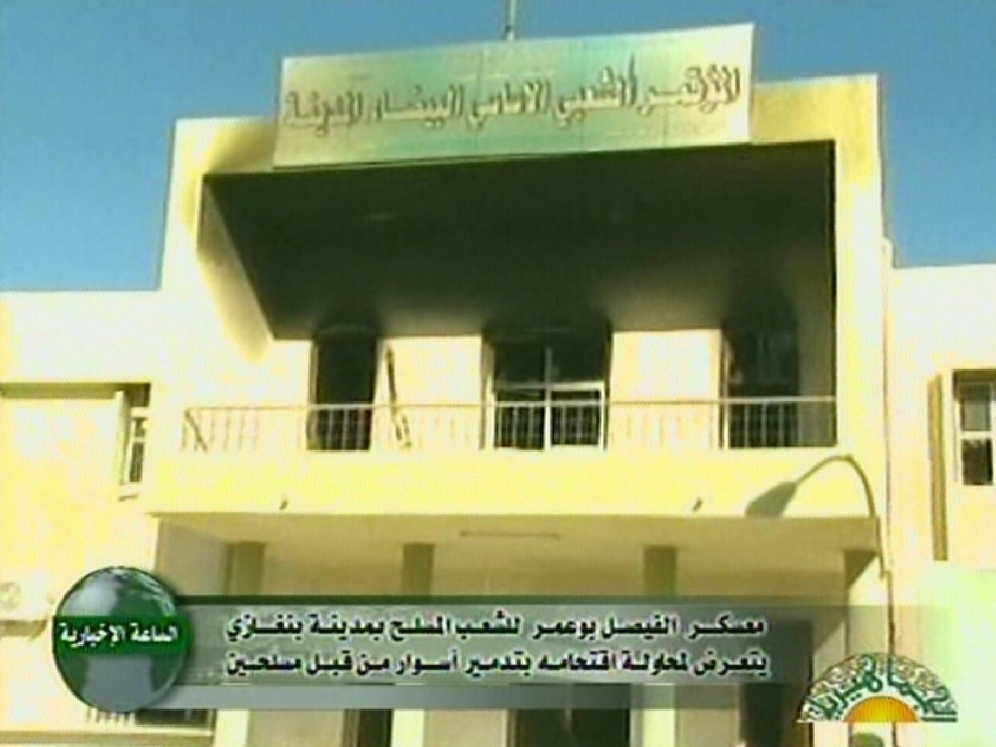 An image broadcast on Libyan state television on Sunday shows damage caused by fire to the local council building in the eastern city of Bayda. The city is now in the hands of anti-Gadhafi rebels who are forming a provisional government.

As forces loyal to Libyan President Moammar Gadhafi reportedly held on to control of the capital city Tripoli and continued a crackdown on protesters Wednesday, the eastern part of the country was in the hands of the rebels — who are now trying to organize themselves.

In eastern Libya, in the city of Bayda, a provisional government was being formed. The new leadership also is holding some Gadhafi loyalists hostage.

As the first Western journalists many of the residents of Bayda had ever seen were led into the meeting, the crowd gave a standing ovation — quickly followed by cries of "Freedom, Freedom!" and "Libya, Libya!"

This building had been a symbol of Gadhafi's regime — where his revolutionary council would meet to discuss local affairs.

A new revolution was finding its voice in Bayda, and its fighters were vowing to end Gadhafi's reign. Some people were crying, others pumping their fists in the air.

"Ordinary people, doctors, lawyers are talking about how we can coordinate with all other cities in Libya who are now under the protesters' control," says Ahmed Jibril, a former diplomat at the Libyan mission at the United Nations.

He says this is the beginning of a new government.

"We have a former minister of justice who just resigned three or four days ago," Jibril says. "He's among us and people agreed ... he would be one of the people in control."

In eastern Libya, it's still chaotic. On the streets, heavily armed and masked young men man checkpoints. There are tanks and anti-aircraft guns that have been looted from military bases positioned around towns and cities — and they are all in the hands of the rebel forces.

Jibril says that eastern Libya will defend itself, but they want a united country. "We will not divide Libya. We will not accept a division of Libya," he says.

Libya is a country of huge oil wealth, but also great poverty. Abdullah Mortady, an architect who hasn't built anything for 15 years, says the people here want to use Libya's riches for the people, not just for the enrichment of one family.

"We want to build our country," he says. "Infrastructure is nothing. Building is nothing. Our morality is completely destroyed. Today I can't speak because for 42 years we didn't speak, even our voice completely disappeared."

The new leadership is asserting itself. An elementary school has been converted into a prison, where around 100 pro-Gadhafi fighters are being kept in detention. They are what remains of a group of fighters who had holed up at a nearby airport and then were forced to surrender after a bloody battle that left a dozen people dead on Tuesday.

Many of the men are wounded, but they've been given blankets and medical attention. They are clearly scared. Most of the men say they are Libyans from the south. Among them are four men from Chad who look weak and malnourished. They declined to talk.

There have been rumors of foreign mercenaries being shipped in by the planeload to fight for Gadhafi in the east, but there is scant evidence of them here.

A Libyan soldier in detention, Ismael Salem Abu Salah, acknowledges that he was sent in to quell the initial unrest. He says he was fired upon first by the pro-democracy forces and that is why the troops fired back.

He adds that he's been treated well since he's been in detention.

The fate of these men is unclear. There is no court to try them and many in the city have been calling for their execution, especially among the younger men.

The older generation, which is now trying to form a government, is ensuring they are protected.

"The leaders, the wise people ... they had a meeting and they said they should stop these youth from, you know, from revenge, you know, because some of the youth have two or three brothers killed from the same family," says Dr. Masoud Abdullah, a professor of management science. "I was there in that meeting. It all comes down to the older generation who stopped the youth from taking revenge and ... killing them."

They will use them as a way to negotiate with the regime, he says, if it should come to that.