Accessibility links
Labor Unions Fight For Their Right To Influence A series of state efforts to rein in union power has spread across Indiana, Wisconsin and elsewhere. Labor unions are fighting for the right to influence a wide range of workplace issues, beyond wages and benefits.

In Indiana on Wednesday, the state Senate approved a bill that would limit collective bargaining by teachers' unions. 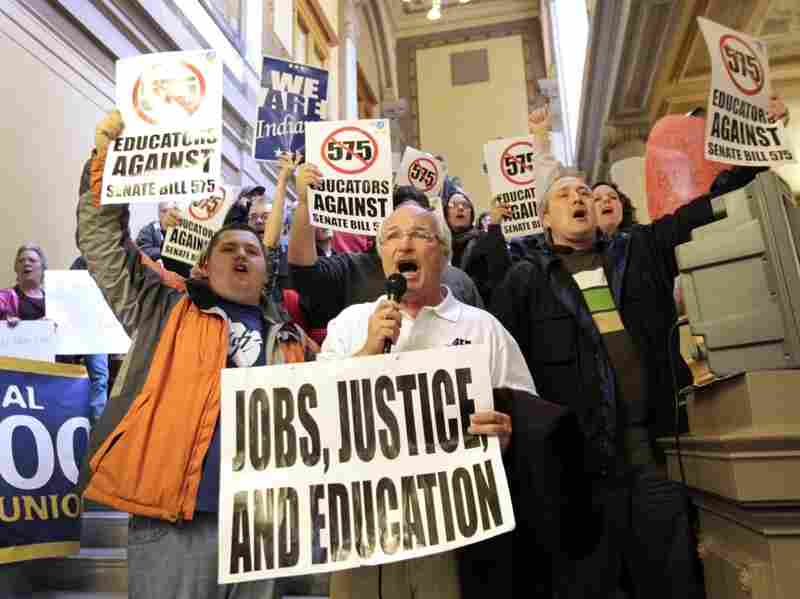 Rick Muir, president of the Indiana Federation of Teachers, chants with other protesters at the statehouse in Indianapolis on Wednesday. Teachers' groups are protesting Indiana Senate Bill 575, which would remove some collective bargaining rights for teachers. AJ Mast/AP hide caption 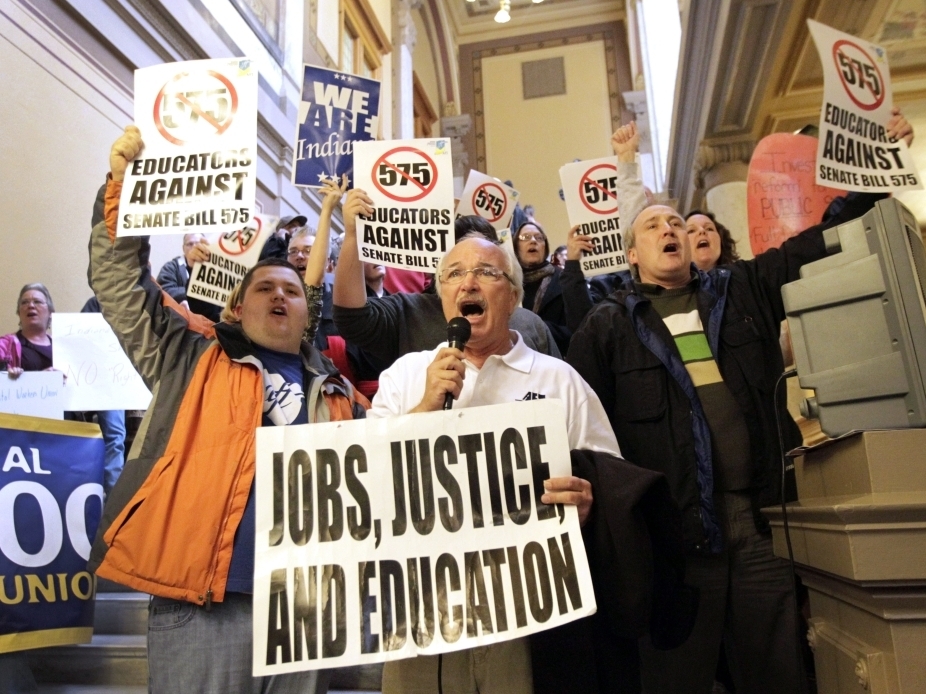 Rick Muir, president of the Indiana Federation of Teachers, chants with other protesters at the statehouse in Indianapolis on Wednesday. Teachers' groups are protesting Indiana Senate Bill 575, which would remove some collective bargaining rights for teachers.

It's the latest in a series of state efforts to rein in union power. Labor is fighting for the right to influence a wide range of workplace issues, beyond wages and benefits. Budget-cutting Republicans say it's time to reduce labor unions' role in workplace decisions.

When a school district or a county government signs a union contract, the headline often announces what kind of pay raise or health care plan the union got. But buried in those agreements are complex rules that are often just as important as money to workers.

Angela Aldous is a nurse on the cancer ward at the University of Wisconsin hospital, where she often oversees chemotherapy. Her union successfully argued that one nurse should never have to care for more than four patients at a time. It was a matter of public safety.

"When you are trying to verify chemo, hang the chemo, give it safely, educate the patient, and heaven forbid have time to comfort the patient as they go through cancer, you can't take more than four patients," she says.

Aldous could lose the right to bargain over such issues if Wisconsin Gov. Scott Walker is able to pass his proposal to limit collective bargaining.

Teachers' contracts often get more scrutiny because parents are concerned about class size, something that is often a subject of bargaining.

But for administrators, collective bargaining can feel more like a strait jacket. John Ashley, head of the Wisconsin Association of School Boards, says some of his members want to team up with neighboring schools to cut costs — but that violates so-called exclusivity clauses.

"Those exclusivity clauses require all the classes offered by a district to be supervised by a member of the district union, even if the course is being offered by a fully certified and licensed teacher from another district."

That's how bargaining affects spending, even when wages and benefits are not directly involved, according to Ashley.

In recent years, education reformers have begun to complain that teachers' contracts limit experimentation, because administrators cannot change the length of the school day, for example, without consulting the union. By far the biggest complaint is aimed at labor's role in hiring, firing and layoffs. Former Washington, D.C., Schools Chancellor Michelle Rhee butted heads with the local union when she tried to fire ineffective teachers and reward top performers. 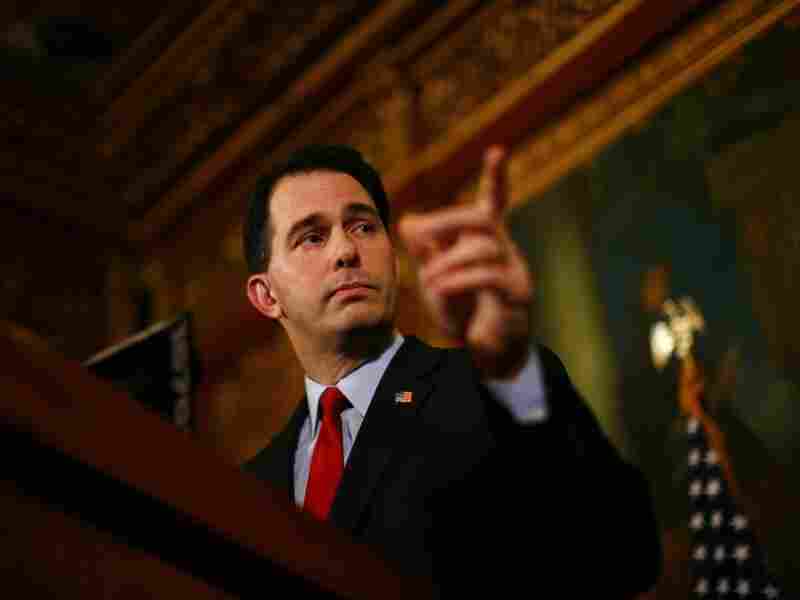 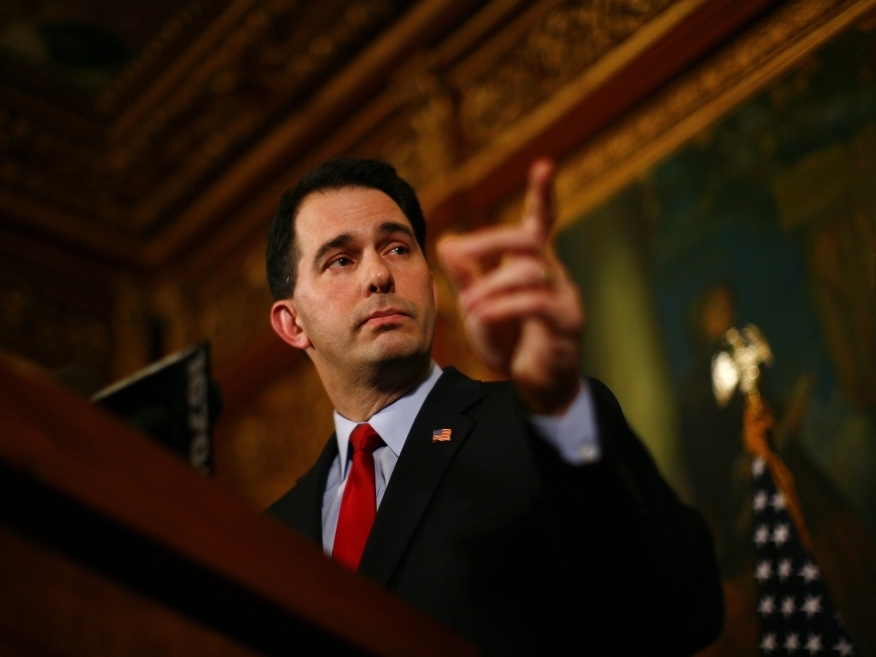 Republican Gov. Scott Walker speaks at a news conference inside the Wisconsin Capitol in Madison earlier this week, while people protest legislation proposed by Walker to restrict collective bargaining.

Now, as head of an advocacy group called Students First, Rhee has released a new video attacking seniority rules. In the video, Rhee argues that "when we do seniority-based layoffs, we actually end up cutting some of our most effective teachers. We actually end up having to lay off more teachers and lose more jobs because the junior teachers are paid the least, and we need to fire more of them to make up the budget deficit."

Seniority and tenure rates could be eaten away if new laws pass in Wisconsin, Indiana and elsewhere. But only if local administrators take advantage of them. Many districts may end up sticking with the status quo, at least for now.

"When you have a contract in place, you're forced to be consistent in the way you make your employment decisions," Henneger says.

That's why employers like to have clear guidelines that have been drawn up with the participation of labor, he says. Once freed from the requirement to negotiate, management may find it difficult to come up with a replacement for traditional tools like seniority.

One thing is sure, Henneger says: If these laws pass, school districts and local governments are going to need lots of legal advice on how to operate in this new world.