Accessibility links
National Museum of American History: Julia Child's Copper Pots Come Home Just before the culinary queen turned 90 and moved to California, she gave the Cambridge, Mass., kitchen where she filmed three of her TV shows to the Smithsonian Institution. Curators at the National Museum of American History reassembled it exactly as it was — except for one major part. 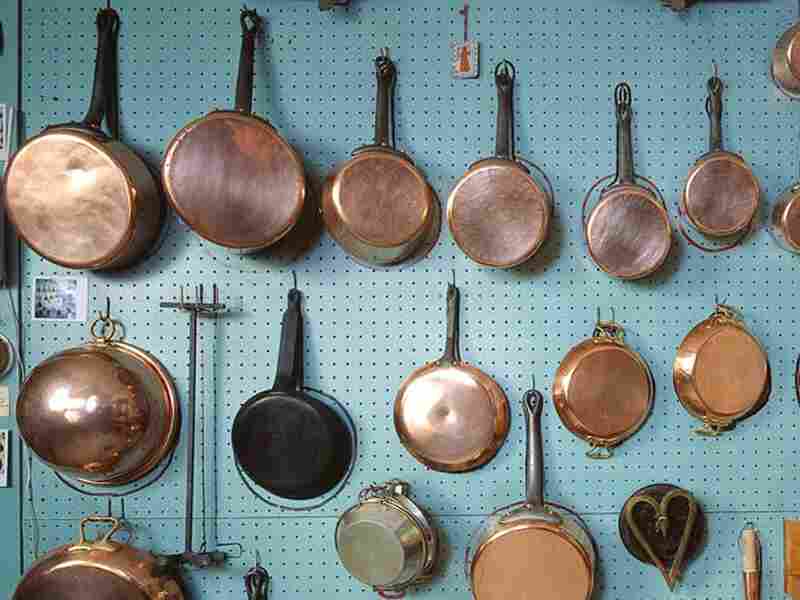 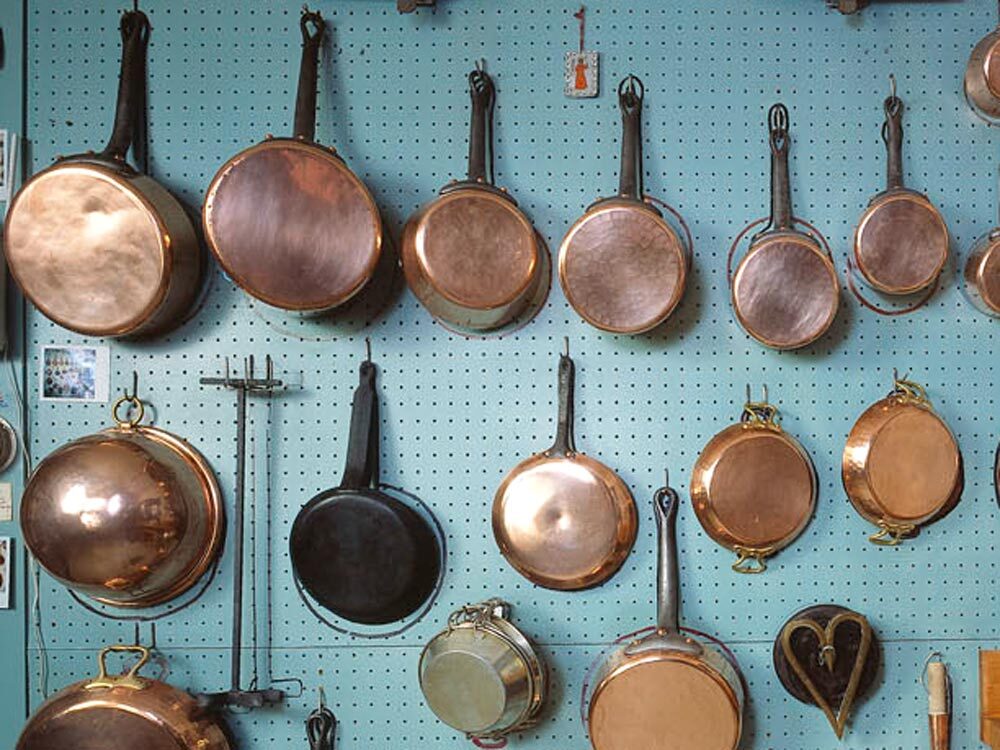 Courtesy of the Smithsonian National Museum of American History

Just before Child turned 90 and moved to California, she gave the Cambridge, Mass., kitchen where she filmed three of her TV shows to the Smithsonian Institution. Curators at the National Museum of American History reassembled it exactly as it was — except for one major part.

Early Wednesday morning, about a dozen curators and other museum staff gently hung the pots and pans on the blue painted pegboard that Paul Child made for his wife.

Paul also designed the look and layout of the kitchen when he and Julia moved into their home in 1961. In 2002, just a few weeks before she gave the nation that kitchen, Julia promised the wall of copper pots to an exhibit in California. When that exhibit closed, the pots and pans headed across the country to rejoin the rest of the kitchen — about 1,200 objects — in Washington, D.C.

The museum's exhibit is called "Bon Appetit" and includes Child's beloved Garland restaurant range, cabinets in cool greens and blues, a dime-store dish drainer and her black KitchenAid refrigerator complete with magnets. They even brought her junk drawer.

In its new location, the 14-by-20-foot kitchen appears exactly as it was the day museum staff took it apart in Cambridge — down to the jar of Skippy peanut butter on the countertop.

The pot wall, what Child called her gleaming "battery de cuisine," was the missing piece.

Paul had drawn a black outline for each object on the pegboard so it could be returned to its proper place. The museum workers, wearing white gloves, carefully followed a diagram so no pot was hung wrong and nothing got dinged.

And it's not all kitchenware. Illustrating her well-known sense of whimsy, there's a tin butterfly, a heart-shaped trivet and a branding iron with the initials J.C.

Probably not coincidentally, the pot-hanging occurred the same week as the opening of the movie Julie and Julia, starring Meryl Streep as Child. Writer and director Nora Ephron donated a few objects from the film to the museum. They will be housed in the museum's collection of music, sports and entertainment history — along with Dorothy's ruby slippers and the Fonz's leather jacket.

There is a scene in the movie where Streep is racing through Dehillerin, the famous Paris cookware store where Child did get a lot of her copper pots. She flings them into a basket, probably not the way the real Child would have treated fine copper pots.

But Child wasn't a snob — she thought pots and pans were for cooking, not for looking at. Near her stove, on more pegboard, are one or two copper pots and a lot of WearEver aluminum cookware from the hardware store. She loved them, too.

"Bon Appetit" was set up as a temporary exhibit, but it has been so popular that the museum has extended it indefinitely. Now visitors will be able to study the kitchen with no missing pieces. No doubt Child would want you to go home afterward and cook something.