Accessibility links
Twenty Years Later, First Iraq War Still Resonates The first Persian Gulf War ended 20 years ago this month. Although it was a quick and seemingly decisive victory, it has had a lasting influence on U.S. engagement with the Middle East. 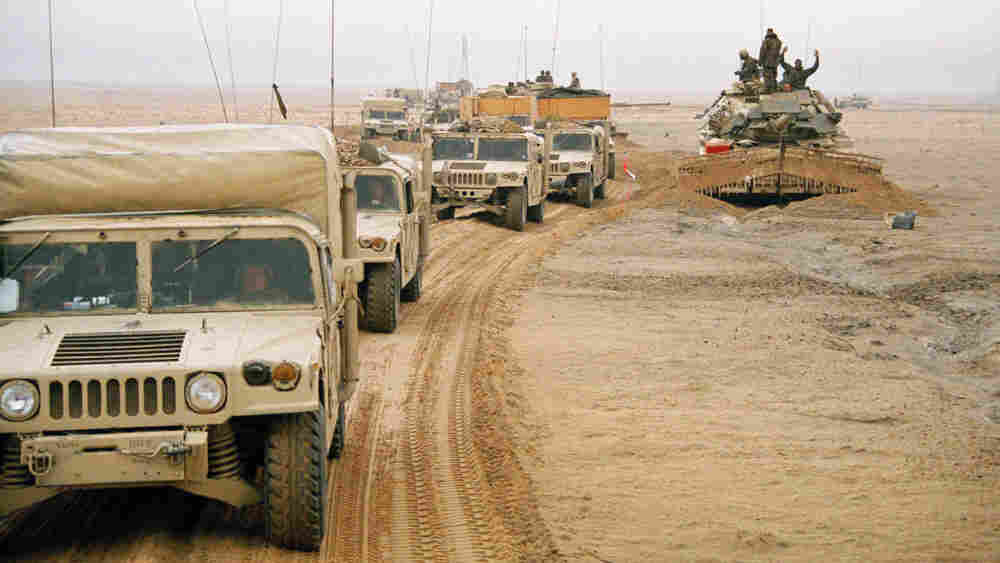 A U.S. Marines 2nd Division convoy moves past a tank equipped with a mine-clearing sled in Kuwait as the ground war gets under way Feb. 24, 1991. Gene Herrick/AP hide caption

The first Persian Gulf War ended on Feb. 28, 1991 — just five days after U.S.-led ground forces first confronted Iraqi troops on Kuwaiti soil, and just over a month after the U.S. had begun bombing Iraq from the air.

It was a short war with a long aftermath.

Then-Iraqi President Saddam Hussein coined a catchphrase when he declared it would be the "mother of all battles" if U.S. and coalition forces sought to eject him from Kuwait. It turned out to be anything but.

Paul Wolfowitz, a Defense Department undersecretary during the war

"It was one of history's most lopsided victories," says Steve Yetiv, a political scientist at Old Dominion University in Virginia. "On the military side, it turned out not to be the 'mother of all battles' at all."

But the first Gulf War did lead to further confrontations — and its reverberations are still felt today.

Most obviously, it helped set the stage for the U.S.-led invasion of Iraq in 2003. It also became a cause celebre for Osama bin Laden and one of the factors that led to al-Qaida's attacks against the U.S. on Sept. 11, 2001. Bin Laden was incensed that "filthy, infidel crusaders," as he called American troops, were based in his homeland of Saudi Arabia, home to Islam's two holiest sites.

"Bin Laden has repeatedly referred to the U.S. going into Saudi Arabia as a key reason for Sept. 11," says Yetiv, who has just published a history of U.S. policy toward Iraq.

How The War Began

In 1990, Iraq was broke, laden with debt from an eight-year war with Iran that had ended in 1988. That summer, Hussein massed troops along his country's border with Kuwait. Still, U.S. intelligence agencies — along with regional allies such as Saudi Arabia — did not believe Iraq would invade.

Once it did, Iraq won a swift victory, taking control of Kuwait within 12 hours. The great concern among other nations became the threat that Iraq's tanks would then roll into Saudi Arabia, giving Hussein control of a sizable share of the world's oil reserves.

"The stakes in 1990 and '91 were really rather enormous," says Richard Kohn, a military historian at the University of North Carolina. "Had Saddam Hussein gotten control of the Saudi oil fields, he would have had the world economy by the throat. That was immediately recognized by capitals around the world."

Iraq's absorption of Kuwait was initially accepted as a fait accompli, with President George H.W. Bush saying, "There is little the U.S. can do in a situation like this."

The stakes in 1990 and '91 were really rather enormous. Had Saddam Hussein gotten control of the Saudi oil fields, he would have had the world economy by the throat. That was immediately recognized by capitals around the world.

Richard Kohn, a military historian at the University of North Carolina

But coming just at the end of the Cold War, Bush was determined that such naked aggression could not be allowed to stand, or no small country would be safe. Bush soon convinced the Saudis that they needed U.S. protection and should provide a staging area for U.S. forces to repel Hussein's forces from Kuwait, unless he pulled out by a Jan. 15 deadline.

Bush won approval of a United Nations resolution allowing such an operation and convinced dozens of countries that they should stand alongside U.S. forces. An air offensive began Jan. 17, seriously softening up Iraqi resolve.

More than half of Iraq's forces had already left Kuwait by the time the coalition's ground offensive began Feb. 24. Despite estimates that Iraq's army — then the fourth largest in the world — would inflict upward of 45,000 casualties, total coalition deaths numbered well under 1,000, according to the Congressional Research Service.

Too Quick A Victory?

With much — but not all — of Iraq's forces in retreat, U.S. generals liked the idea of ending the ground war on its fifth day, going one better than the Israelis had in their 1967 Six-Day War against neighboring Arab states, according to Bush biographer Herbert Parmet. White House Chief of Staff John Sununu liked the sound of the ground war being completed in 100 hours, so a ceasefire was set for 8 a.m., Riyadh time, on Feb. 28.

Some commanders on the ground were incensed that they were not allowed to decimate more of Iraq's top troops and tanks while they had the chance. Regret would spread during the subsequent weeks, historical accounts suggest.

Before the ground war, Bush had encouraged the Iraqi people to rise up against Hussein, in hopes of staving off a ground invasion. Taking that as encouragement, both Shiites in Iraq's south and Kurds in the north began rebellions after the ceasefire. But they were mowed down within days by the tens of thousands, with Iraq using military helicopters that U.S. commanders allowed them to fly, nominally for the Iraqis' communications purposes.

The U.S. ultimately set up massive operations to help Iraqi refugees and established no-fly zones over northern and southern Iraq to protect their populations. But lasting damage was done to the U.S. image, at least among Shiites in the south.

"One of the impacts was that many Shia in Iraq became very bitter against the U.S.," says James DeFronzo, a University of Connecticut sociologist and author of a book about the second Iraq war. "That's one of the reasons why, during the second Iraq war, there was not the kind of reception that U.S. soldiers had been led to expect."

U.S. forces would remain in the region, in part to enforce the no-fly zone. This incensed al-Qaida leader Osama bin Laden.

It is true that after the end of the [1991] war there was a lot of talk about 'Why didn't you finish the job?' And that continued until the second Gulf War. But we don't hear it anymore.

Fresh from his symbolically important role in helping to expel the Soviet Union from Afghanistan, bin Laden had been eager to play the leading role in protecting his Saudi homeland from Iraqi incursion.

In September 1990, he told Prince Sultan, the Saudi defense minister, that he could muster 100,000 fighters within three months and there would be no need for American or other "non-Muslim troops."

"There are no caves in Kuwait," Prince Sultan said in response. The Saudis much preferred the promise of hundreds of thousands of Western troops made to them by Dick Cheney, then the U.S. defense secretary, to the prospect of thousands of armed jihadists operating within their borders.

This ultimately led to bin Laden's final break with the Saudi elite and turned his organization's attention toward Western enemies, says Adam Mausner, a research associate at the Center for Strategic and International Studies.

After U.S. forces had remained in Saudi Arabia for some years, bin Laden wrote the Saudi king that "it is unconscionable to let the country become an American colony with American soldiers — their filthy feet everywhere."

Historians of the war have established that no one within the Bush administration argued at the time that coalition forces should exceed the U.N. mandate by chasing Iraqi troops all the way to Baghdad. U.S. officials initially believed that Hussein's regime would fall of its own accord following his loss, but should not be toppled for fear of losing a regional counterweight against Iran.

But Hussein remained a continuing thorn. The U.S. kept up a program of sanctions and bombing through the Clinton years. After the towers fell on Sept. 11, President George W. Bush instructed his advisers to look for connections between Iraq and al-Qaida.

Given the threat, the second Bush administration was concerned about the possibility of weapons of mass destruction. Following the 1991 war, weapons inspectors found that Iraq was closer to building nuclear weapons than Western officials had believed, leading to skepticism within the administration when a new round of inspections found no evidence of nuclear weaponry in 2002.

The U.S. invaded Iraq in 2003, with Bush brushing aside warnings from some of his father's advisers that he would face the same trap they had avoided by not going all the way to Baghdad in 1991.

Even Wolfowitz, who became a leading advocate for the 2003 invasion as deputy defense secretary, had written in 1997 of that earlier decision that "a new regime would have become a United States responsibility. Conceivably, this could have led the U.S. into a more or less permanent occupation of a country that could not govern itself, but where the rule of a foreign occupier would be increasingly resented."

"It is true that after the end of the [1991] war there was a lot of talk about 'Why didn't you finish the job?' " Brent Scowcroft, who served as President George H.W. Bush's national security adviser, said at the Council on Foreign Relations panel.

"And that continued until the second Gulf war," Scowcroft said. "But we don't hear it anymore."