Accessibility links
Analysts Say A Government Shutdown Is No Joke In nine days, the federal government could shut down unless Democrats and Republicans reach an agreement on a spending bill. While budget experts say it's unlikely that Social Security and veterans checks would stop coming, analysts say that if the mid-'90s shutdown is any indication, people may be angry at the disruption of services. 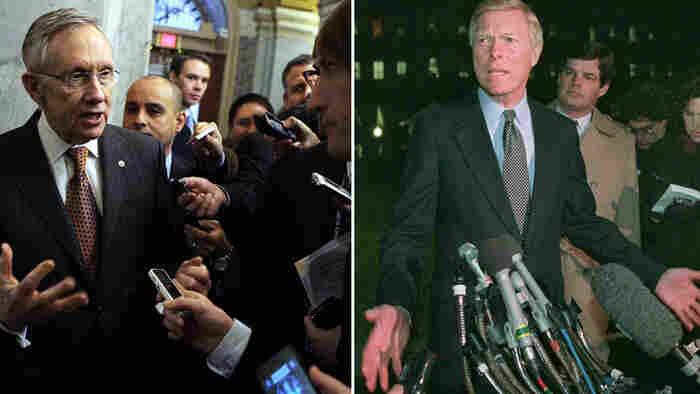 In nine days, the federal government could shut down unless Democrats and Republicans can reach an agreement on a spending bill for the rest of the year.

Time is running out in this high-stakes budget showdown.

In private, talks continue on a possible compromise, but in public, the two parties are squaring off, trying to make sure that if there is a shutdown, the other side gets the blame.

"People should be careful about, you know, being too loose in terms of talking about a government shutdown because this has — this is not an abstraction," President Obama said at his press conference last week. "You know, people don't get their Social Security checks. They don't get their veterans payments. Basic functions shut down. And that also would have an adverse effect on our economic recovery."

"Everybody may hate federal spending, but they like federal services," he says. "And that's what happened back in '95 and '96 when we had the last two shutdowns. Within minutes of the shutdown, after everyone got over the initial kind of amusement of the situation, they realized suddenly that they couldn't apply for a passport, couldn't apply for a visa, and national parks were closed. Government contractors suddenly found out there was no one there to review their proposals or process their checks — and they were angry as hell about it."

It's the memory of the '95 shutdown and the blame Republicans got for causing it that is motivating House Speaker John Boehner to insist this time the GOP does not want a shutdown.

"We have some Democrats here in Capitol Hill threatening to shut down the government rather than to cut spending and to follow the will of the American people," he says.

Republican strategist Ed Rogers thinks Republicans are right to try to inoculate themselves against the political repercussions of a shutdown. 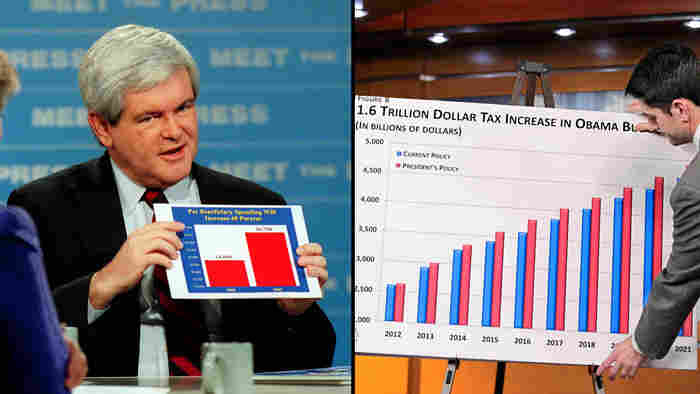 "Whatever the department is that's gonna get cut ultimately gets down to producing the media equivalent of widows and orphans that are gonna go without and the heartless Republicans," he says. "So to avoid that — the good guys versus the bad guys, like we had during the [Newt] Gingrich era during the shutdowns where Clinton was the good sympathetic guy and Gingrich was the bad guy that couldn't make government work — to avoid that is important."

But Gingrich says he thinks the political lesson of the mid-'90s shutdown is more complicated.

"When we shut the government down, we convinced our base we were serious and we became the first re-elected Republican House majority since 1928," he says. "So it's a little hard for me to believe that it hurt us. I think it also helped us. But, in this case, what you don't want to do is just play games with it. If they can find a way to keep the government open in a principled manner, they should."

For Boehner, that means a continuing resolution, Washington jargon for a temporary spending bill. That includes spending cuts.

Exactly what level of cuts would satisfy Boehner's Tea Party freshmen is unclear — they've already forced him to double the original level of cuts in the GOP's budget bill for the remainder of this year. But there are also political perils for Democrats in the budget standoff. They don't want to be in the position of merely defending spending. And that's why New Jersey Rep. Robert Andrews is eager to frame the debate this way.

One thing about a government shutdown, the government doesn't stop taking money out of your paycheck every Friday. People still pay taxes, but they get no services. How anybody could put the country at risk of that situation is beyond me.

"One thing about a government shutdown, the government doesn't stop taking money out of your paycheck every Friday. People still pay taxes, but they get no services. How anybody could put the country at risk of that situation is beyond me," he said. "And that's why the House Democrats and now the Senate Democrats have stepped forward and said, 'Look let's make a temporary agreement. Let's negotiate reasonably. And let's go forward from there.' "

So that's where things stand now. Boehner says he needs some unspecified level of spending cuts to keep the government running while the two sides negotiate a budget for the rest of this year. Senate Democrats say they're willing to make cuts too, but haven't put forward a number. The White House is not weighing in yet.

Government expert Paul Light says he thinks that unlike in 1995, Republicans might actually have an edge in this fight — because the public's desire for fiscal restraint is so great.

"If Boehner is now offering a CR, but it's got budget cuts in it, he takes the high ground. And Democrats are in a position saying, 'No we don't want any cuts at all. We just want a pure CR.' And that's a difficult issue to explain to the American public," he says.

But Light says if there is a shutdown, both sides will suffer politically.

"I think Americans are pretty disgusted with how Washington is working, and a shutdown will damage both parties," he says. "I think these games about who cuts what and a continuing resolution — they're just games. The vast, vast, vast majority of Americans don't understand a thing about how the budget process works. And they certainly wouldn't understand this kind of late maneuvering over a continuing resolution."

The public may not understand, but most of the players agree that this kind of maneuvering will probably continue until the very last minute, late next week.