Accessibility links
Are Government Employees Too Well Paid? Some economists say state and local government jobs pay less than comparable private sector jobs. But others argue that public workers have too many protections and benefits. As states struggle to close budget deficits, public employees' pay packages and protections are being fiercely debated.

Are Government Employees Too Well Paid?

Are Government Employees Too Well Paid? 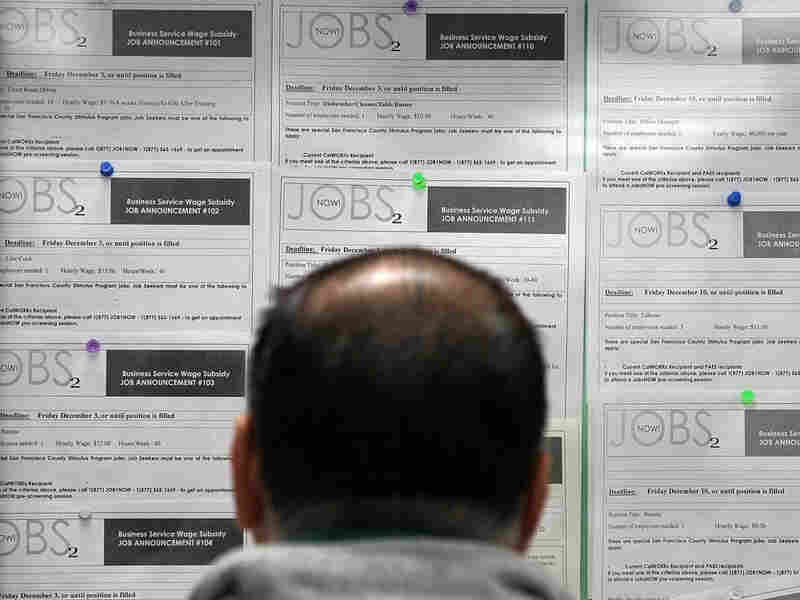 A job seeker looks at listings on a bulletin board. Justin Sullivan/Getty Images hide caption

Tumult over state budget shortfalls — and proposed remedies that would diminish the clout of public unions — continued to spread this week.

From Wisconsin to Ohio and Indiana and beyond, newly ascendant Republican governors and legislators are taking on unions as they launch battles on budget deficits. They have been focusing on rolling back negotiated wage increases and benefits, as well as proposing changes that would weaken collective bargaining rights.

The moves are seen by union supporters as being motivated more by politics than by budget cutting. After all, public unions are among Democrats' biggest and most reliable donors.

But conservatives have struck a nerve with many Americans who are facing joblessness and endemic job insecurity. They raise the question, why should unionized public employees enjoy better wages, benefits and job security than workers in the private sector?

Or, as New Jersey Gov. Chris Christie said Tuesday: "In Wisconsin and Ohio, they have decided that there can no longer be two classes of citizens — one that receives the rich health and pension benefits, and the rest who are left to pay for them."

The image of public workers as sitting fat and happy while those in the private sector struggle has proved potent. But its accuracy is open to wide debate, and not just among politicians of different stripes. "You ask 10 economists about this, and you're get 12 different answers," says Keith Bender, an economics professor at the University of Wisconsin, Milwaukee.

So do public union workers, while enjoying better job security, actually receive richer pay and benefit packages than those in the private sector?

Bender is one of the economists who argue in a recent study that public workers actually receive less compensation in combined wages and benefits than those in comparable jobs in the private sector.

In a study last year for the National Institute for Retirement Security and the Center for State and Local Government Excellence, Bender and co-author John Heywood, also a UWM economics professor, assert that wages for typical state workers are 11 percent less than those in the private sector with comparable education and in comparable jobs. Local workers earn 12 percent less, they say.

"We know that jobs in the public sector are much more secure than in the private sector in normal conditions," Bender says. "People value all sorts of things in jobs, and if they value job security, that negative 6.8 percent may be the value of security."

Benefits are more generous in the public sector, they found, but not enough to make up for the wage differential.

Comparisons of public sector vs. private sector pay and benefits have been colored in recent years by government outsourcing of jobs done by unskilled workers, such as cafeteria workers and janitors, Bender says.

Government workers tend to have more protections because so many of them are members of unions.

Over the past three decades, union membership in the private sector has fallen from about 23 percent of workers to 7.7 percent, according to an analysis at unionstats.com. Among public sector workers, it has remained steady at about 40 percent during the same period.

The public sector workforce has become increasingly educated and homogeneous, and that has meant that wages have increased to reflect the workforce makeup, Bender and Heywood argue.

The institute's national findings are also reflected in its recent state-by-state studies. Researchers assert that in states including Wisconsin, Ohio, Indiana — and Christie's New Jersey — public workers' total compensation lags behind those in comparable jobs in the private sector.

John Russo, a professor at Youngstown State University and co-founder of its Center for Working Class Studies, acknowledges that economic stresses and uncertainty in the private sector have fed resentment toward public employees.

"A lot of people are going through difficult times — we're seeing a decline in the middle class, and people are looking at teachers, firefighters and other public employees as doing better," he says.

"That has fed the notion that those employees are paid better, but the actual figures show they're not," says Russo, who last week testified before the Ohio Senate's Insurance, Commerce and Labor Committee against a bill that would curtail state and local workers' collective bargaining rights.

But some, including management expert Brooks Holtom of Georgetown University, take issue with assertions that public employees are less well compensated than their private counterparts, when job security and benefits are taken into consideration.

"At a time of high unemployment, it's not hard to understand why people would question why these workers have these protections," Holtom said. "What's so special about these workers?"

Many point to an analysis by USA Today last year that asserted, based on data from the Bureau of Economic Analysis, that federal civil servants — not state or local ones — had in 2009 "average pay and benefits" that were nearly double those of private workers.

An analysis by PolitiFact.com, however, found that public vs. private claims can be problematic given both the difficulty in making apples-to-apples comparisons and the higher percentage of white-collar jobs in the public sector.

Its research found a decidedly mixed bag: some salaries in the public sector higher, some lower.

Holtom says he sees the unfolding arguments in the states as boiling down more to public union rules — such as mandatory membership — rather than an attack on civil service rules.

He sees pay and benefits for public service employees as unsustainable and the state-based debates part of a "course correction."

"It's unfortunate, but we're all doing more with less," he says, noting that Georgetown faculty members have had more than two years of wage freezes. "And the public sector seems to believe it should be protected from this."

Christie asserts that public unions "are trying to break the middle class."

Union backers assert that the unions are made up of — and protect — middle-class people.

But there can be little argument that states and municipalities are mired in debt, which The Washington Post Wednesday estimated to be about $2.4 trillion.

Public union officials argue that it isn't just negotiated compensation packages that got them there: It's a lack of revenue caused by continued tax cuts, tax breaks for businesses and corporations, and massive losses because of the Wall Street-fueled crisis in the housing industry.

No matter how the states ended up where they are, it has prompted a real debate about unions, the free market and capitalism.

This is a defining moment, Bender says: "It is a struggle about collective bargaining as well as budgets."

And primary to that struggle is what people believe to be the truth about public union pay and benefits, and what the facts — difficult though they are to assess — really are.

An earlier version of this story incorrectly reported that a study on public employee pay, authored by Keith Bender and John Heywood, was published by the Economic Policy Institute. It was published by the National Institute for Retirement Security and the Center for State and Local Government Excellence.