Accessibility links
Obama Quiet As Union Protests Grow In Swing States Union organizers are ramping up their efforts in state capitals across the country, emphasizing that what began in Madison, Wis., could have national consequences. But union leaders say they are glad the Obama administration has watched from the sidelines because they don't need the president's help. 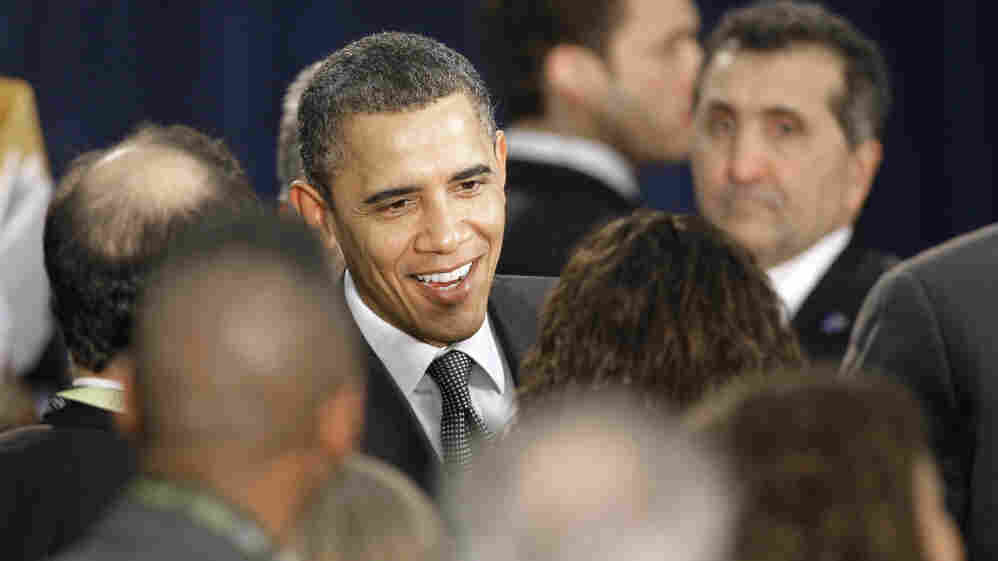 President Obama greets supporters after giving closing remarks Tuesday at a small business forum at Cleveland State University. Obama has only weighed in once on the union protests in Indiana, Ohio and Wisconsin. Tony Dejak/AP hide caption 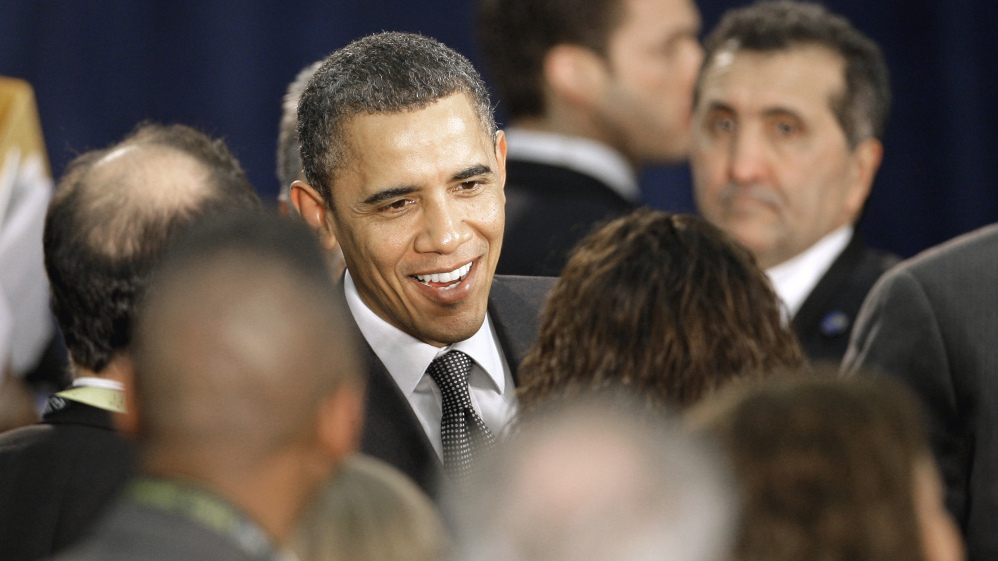 President Obama greets supporters after giving closing remarks Tuesday at a small business forum at Cleveland State University. Obama has only weighed in once on the union protests in Indiana, Ohio and Wisconsin.

Union organizers are ramping up their efforts in state capitals across the country, emphasizing that what began in Madison could have national consequences. Although there are real stakes for Washington, President Obama's team is working to keep the focus on the statehouse, not the White House.

The president spent a full day in Ohio this week while union workers were raising their voices in protest. The demonstrators were in Columbus; Obama was in Cleveland. He spoke all day long about small business and innovation yet did not say a word about the labor conflict.

In fact, he has only made one comment on the union battles, and that was last week.

"Some of what I've heard coming out of Wisconsin, where you're just making it harder for collective bargaining, generally seems like more of an assault on unions," he told Milwaukee TV station WTMJ.

The White House is watching a lot and saying little. Some of this may reflect a broad new sense of discipline. A year ago, the president was quick to change his focus from one crisis to another. Today, if the White House decides the president should spend the week talking about small business, his focus is more likely to stay there.

But Republicans have also demonstrated why Obama might be better served by watching from the sidelines. They accuse him of meddling in local affairs and preventing Wisconsin's governor from balancing the budget.

"I think it's inappropriate for President Obama to do anything except try to deal with these problems on a federal level," says former Wisconsin Republican U.S. Sen. Bob Kasten. "He's trying to have it both ways, and he's trying to tell the people that he's concerned about deficits while also trying to tell a narrow group of public employee unions that he's concerned about the governor of Wisconsin going too far."

President Obama's political machine, Organizing for America, helped coordinate some of the protests. But this week one official there stressed that "this is all being driven by the folks on the ground."

The new approach from national leaders seems to be: Help where you can, but don't toot your horn about it. And that's fine with the unions.

"We're not asking him to organize us; we can organize ourselves," said Gerry Hudson, executive vice president for the Service Employees International Union, during a Wednesday protest outside Wisconsin's offices in Washington, D.C.

Hudson said he appreciates Obama's support but doesn't need his help. He fears that if the White House is too vocal, the controversy in Wisconsin and elsewhere may appear to be engineered from outside rather than a grassroots response to behavior that labor activists view as union-busting. 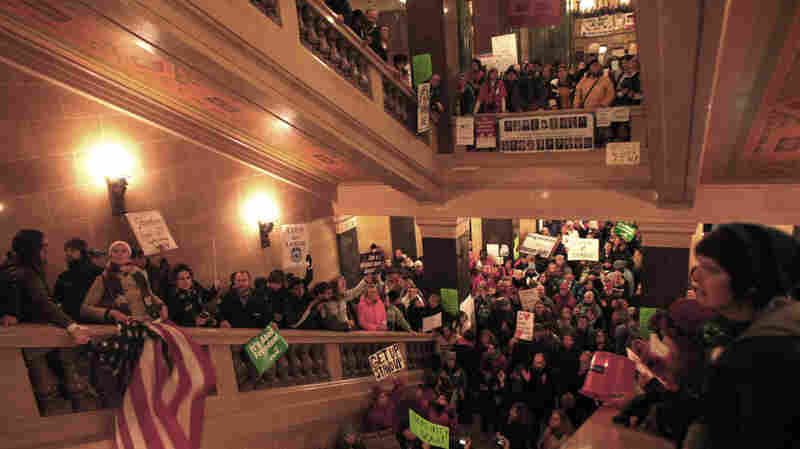 Protesters demonstrate outside the office of Wisconsin Gov. Scott Walker during his fireside chat Tuesday at the Capitol. Eric Thayer/Getty Images hide caption 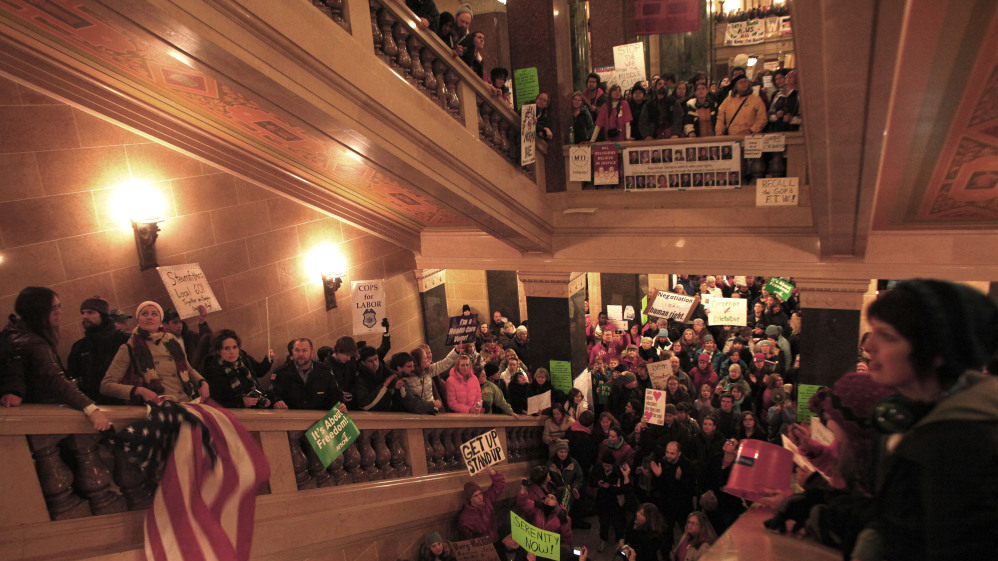 Protesters demonstrate outside the office of Wisconsin Gov. Scott Walker during his fireside chat Tuesday at the Capitol.

There could be significant consequences for the White House regardless. In recent elections, Republicans have made inroads with working-class voters who used to be staunch Democrats. This may be a moment to reverse that trend.

"Democrats stand to solidify their position with working-class voters who are sympathetic to these strikers," says Andrew Kohut of the Pew Research Center. "This is especially important because working-class voters have very much been a swing group in recent elections."

A new Gallup poll shows that 61 percent of Americans support collective bargaining rights. And many of these protests are in politically important swing states, such as Wisconsin, Ohio and Indiana. They are places where Republicans made big gains in the 2010 midterm elections. Democrats believe this conflict will help mobilize base voters for 2012, whether the White House is vocal or silent, and whether the unions ultimately win or lose.