Accessibility links
Fight For Libya Edges Closer To Tripoli, Gadhafi Libyan army units and militiamen reportedly attacked a mosque where protesters had taken refuge and fired on others protecting a local airport to push back a rebellion that has moved closer to Moammar Gadhafi's bastion in the capital. The revolt has broken away nearly the eastern half of Libya and unraveled parts of the regime.

Hear Maimuna Aghliw, a 20-year-old student in the city of Misrata.

Fight For Libya Edges Closer To Tripoli And Gadhafi

Fight For Libya Edges Closer To Tripoli And Gadhafi 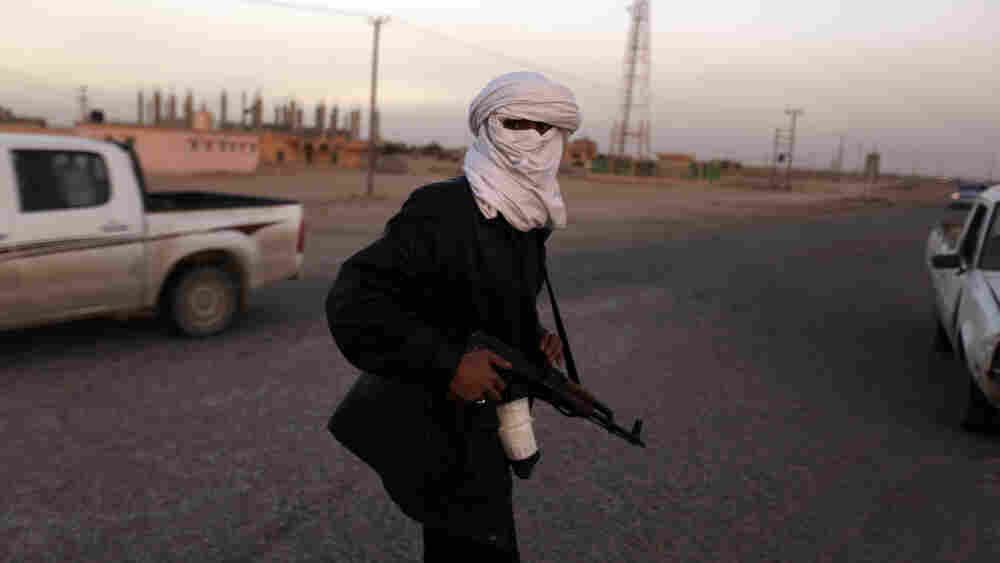 A Libyan policeman who defected to the side of anti-government protesters manned a checkpoint in the opposition-held, eastern city of Tobruk on Thursday. Patrick Baz/AFP/Getty Images hide caption 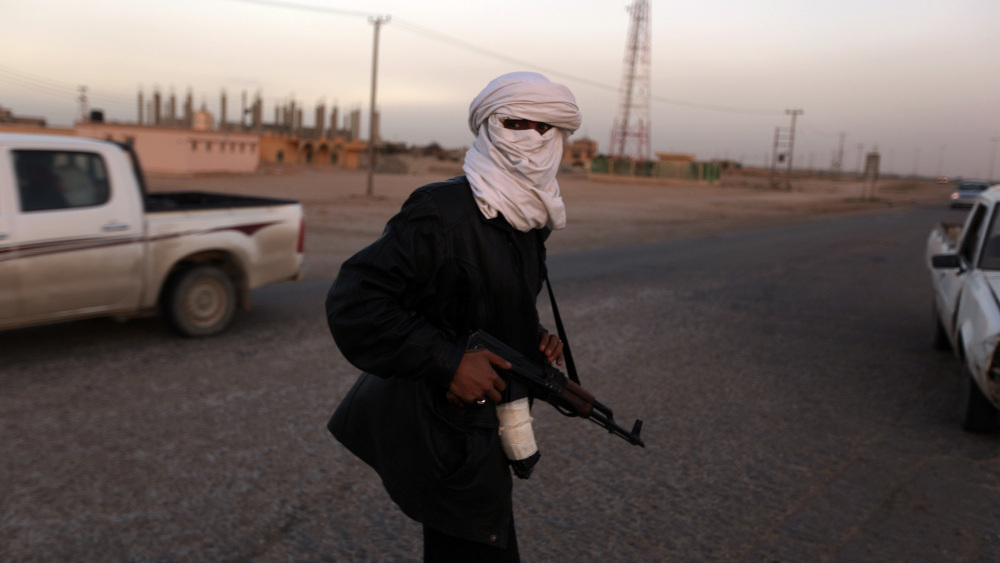 A Libyan policeman who defected to the side of anti-government protesters manned a checkpoint in the opposition-held, eastern city of Tobruk on Thursday.

As Moammar Gadhafi's grip on swaths of Libya faltered, army units and militiamen launched a swift and reportedly brutal counterattack Thursday against protesters who have risen up in cities close to the capital.

NPR received reports Thursday of a brutal fight for control of the city of Zawiya, 30 miles west of Tripoli. A Libyan newspaper reported that 23 people were killed and 44 injured in the clashes. 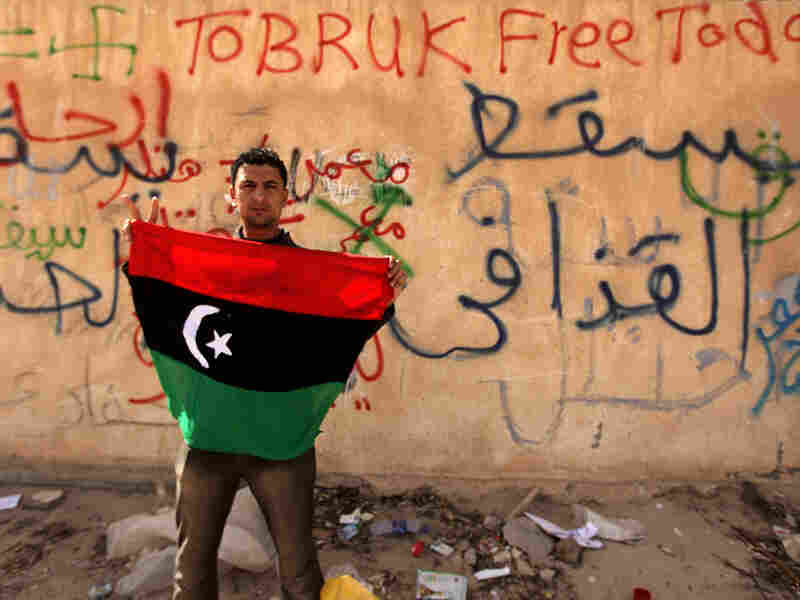 A protester holds an old national flag in front of a wall covered with graffiti against Libyan leader Moammar Gadhafi in the eastern city of Tobruk on Thursday. AFP/Getty Images hide caption 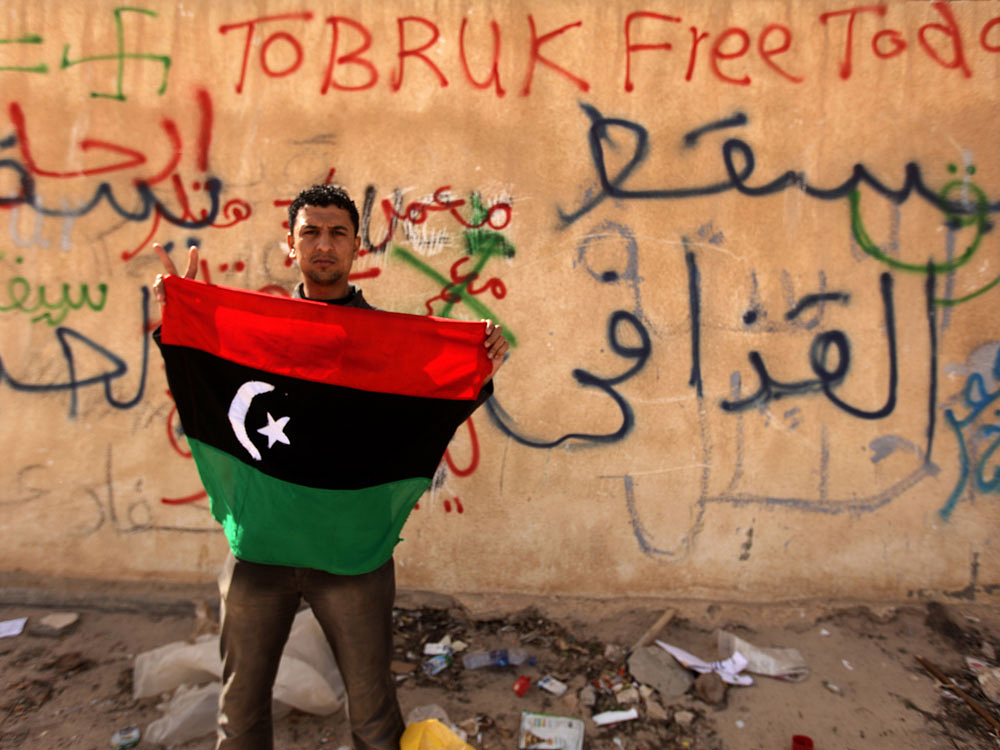 A protester holds an old national flag in front of a wall covered with graffiti against Libyan leader Moammar Gadhafi in the eastern city of Tobruk on Thursday.

An army unit attacked the city's Souq mosque, where regime opponents had been camped for days in a protest calling for Gadhafi's ouster, a witness said. The soldiers opened fire with automatic weapons and hit the mosque's minaret with fire from an anti-aircraft gun, he said. Some of the young men among the protesters, who were inside the mosque and in a nearby lot, had hunting rifles for protection.

A doctor at a field clinic set up at the mosque said he saw the bodies of 10 dead, shot in the head and chest, as well as around 150 wounded.

The witness said an envoy from Gadhafi had come to Zawiya a day earlier and warned protesters: "Either leave or you will see a massacre."

Hear Maimuna Aghliw, a 20-year-old student in the city of Misrata.

"What is happening is horrible. Those who attacked us are not the mercenaries — they are sons of our country," he said, sobbing. After the assault, thousands massed in the city's main Martyrs Square, shouting, "Leave, leave!" in reference to Gadhafi, he said.

In a speech carried on Al-Jazeera, a voice purported to be Gadhafi's chastised the people of Zawiya, telling them to "control your children." He blamed the revolt on al-Qaida leader Osama bin Laden and said the uprising has been carried out by young men hopped up on al-Qaida-supplied hallucinogenic pills given to them "in their coffee with milk, like Nescafe."

Libya's leader claimed that "no one above the age of 20" was participating in the unrest and that young men get "trigger-happy and shoot, especially when they get stoned on drugs."

"Be advised, entering Libya to report on the events unfolding there is additionally hazardous with the government labeling unauthorized media as terrorist collaborators and claiming they will be arrested if caught," the department said in a statement.

Outside Misrata, Libya's third-largest city, militiamen reportedly attacked a line of residents who were protecting a small airport, opening fire with rocket-propelled grenades and mortars.

"They left piles of human remains and [a] swamp of blood," according to a resident who said he witnessed the assault. "The hospitals are packed with those killed and injured." But he could not provide exact figures.

Independent estimates of the number of people killed range from 233 to as many as 1,000. Seif al-Islam Gadhafi, one of Gadhafi's sons, said that such reports are exaggerated, although he didn't provide his own figures.

During a news conference Thursday aired on state TV, the younger Gadhafi said the number killed by police and the army had been limited and "talking about hundreds and thousands [killed] is a joke."

In Benghazi, the scene of a bloody battle that ended just days ago, Libyan army troops that have defected to join the pro-democracy rebels are trying to organize an offensive against the regime, senior military commanders said. They are also trying to pinpoint Gadhafi's location. Col. Tarek Saad Hussien, one of those officials, told NPR they have information the Libyan leader is moving from house to house.

NPR's Lourdes Garcia-Navarro reported that hundreds of people have converged on an army base where they believe secret prisons run by the regime may have existed.

"They say they are shocked by what they found," she said. "In one case, they found an underground prison where 50 people were being held, and they are now digging frantically looking for mass graves."

A senior Libyan army commander who defected to the side of anti-government protesters said Thursday that his soldiers were training volunteers to join the fight to topple Gadhafi.

Maj. Gen. Soliman Mahmoud Al-Obeidy, who commands army units based in the eastern city of Tobruk, allied with rebel forces Wednesday. He told NPR that fresh volunteers were coming in every day.

"They are using some of the army officers that defected here in the east," Garcia-Navarro said. "They are training them on heavy weapons and army tactics to go help protesters in the west of the country who are still under the control of Moammar Gadhafi." 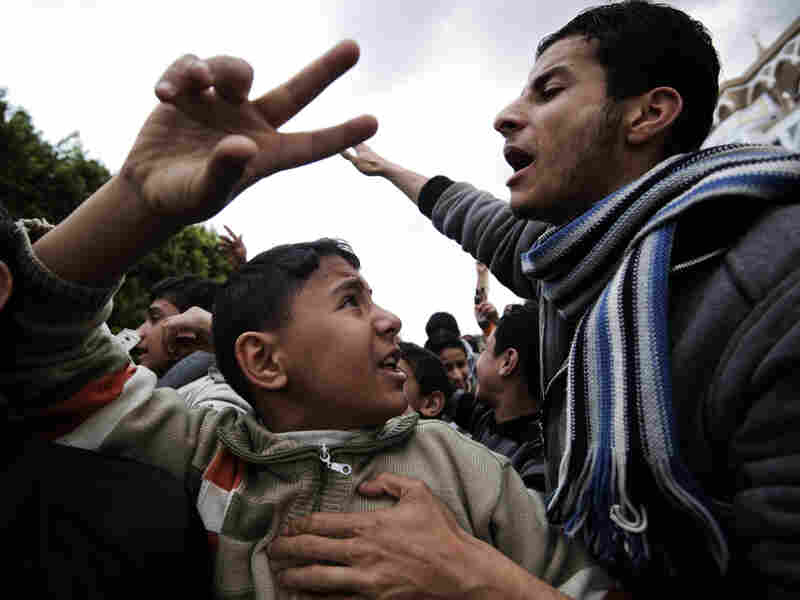 Libyans shout anti-Gadhafi slogans during a demonstration in the eastern town of Derna, between Tobruk and Benghazi. AFP/Getty Images hide caption 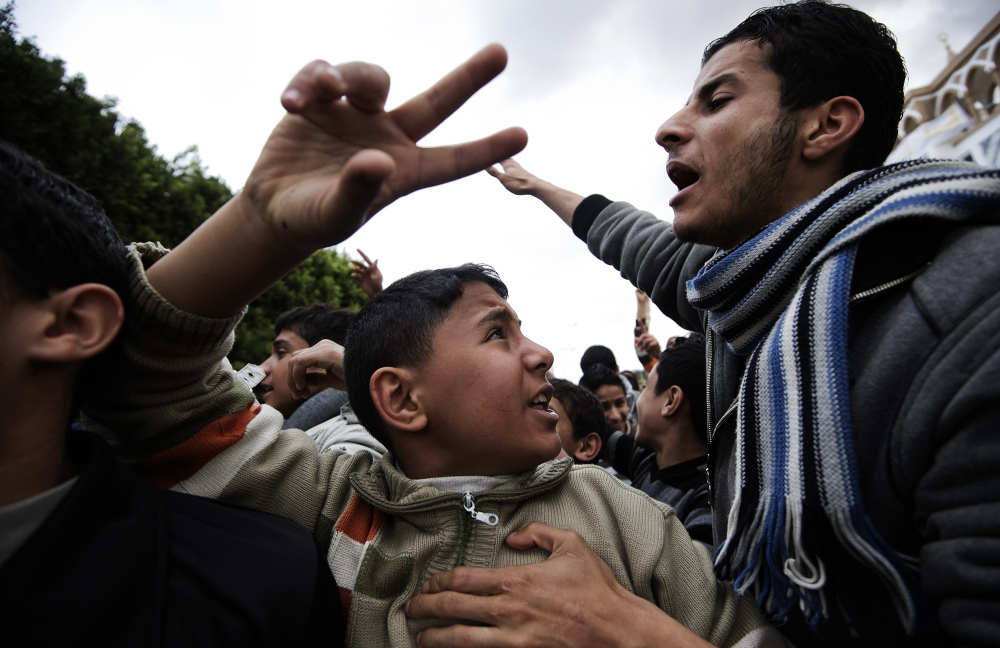 Libyans shout anti-Gadhafi slogans during a demonstration in the eastern town of Derna, between Tobruk and Benghazi.

Even as the rebellion moves closer to Gadhafi's bastion in the capital, home to a third of Libya's 6 million people, thousands of people were struggling to leave Libya by land, sea and air.

Helena Sheehan, a 66-year-old retired professor from Dublin, Ireland, spent six days in Tripoli, where she was scheduled to deliver a lecture. She left the country on a British evacuation flight.

She described the scene at Tripoli airport as "real airport hell." Others described similar scenes.

"In the airport, we were afraid and we were afraid that thugs would come after us," said Hamda Sa-at, a 27-year-old Egyptian who arrived in the Egyptian capital, Cairo, on a flight from Tripoli.

NPR's Tom Gjelten reported that Tunisians who worked in Libya were streaming back across the border. At one checkpoint, Tunisians "enthusiastically cheered as they crossed the border denouncing Gadhafi."

Two ships braved churning seas Thursday to whisk 4,500 Chinese workers away from Libya to the island of Crete, while rough weather farther west left hundreds of Americans stranded on a ferry in Tripoli.

Americans who eagerly climbed aboard the Maria Dolores ferry at Tripoli's As-shahab Port on Wednesday faced a long delay in their travel plans. Strong winds have been whipping up high waves in the Mediterranean Sea, and the 600-passenger catamaran ferry was not likely to leave for the eight-hour journey to Malta until Friday.

"The ferry will depart when the weather improves. At the moment, we're anticipating this will happen by tomorrow morning, but we're waiting for an updated weather report," said Elijah Waterman of the U.S. Embassy in Malta.

People who managed to flee Tripoli by air described sheer chaos at the airport, with people shoving and climbing over each other to get on planes. Amateur video showed crowds of people jammed shoulder to shoulder, some appearing to be camped out.

"The airport is just a zoo. There's about 10,000 people there, all trying to get out," Ewan Black of Britain told the BBC as he got off a flight at London's Gatwick Airport.

Those who made it out of Libya described a frightening scene, with bodies hanging from electricity poles in Libya's eastern port of Benghazi and militia trucks driving around loaded up with dead bodies. One video showed a tank apparently crushing a car with people inside.

International momentum has been building for action to punish Gadhafi's regime for the bloodshed.

President Obama said the suffering in Libya "is outrageous and it is unacceptable," and he directed his administration to prepare a full range of options, including possible sanctions that could freeze the assets and ban travel to the U.S. by Libyan officials.

The European Union said Thursday that it is preparing sanctions against Libya. Some EU governments have had a close relationship with Gadhafi, but all 27 united in a threat of sanctions against him if mass violations of human rights continue.

"I have seen horrible crimes that are unacceptable and must not remain without consequences," European Union President Herman van Rompuy said.

The U.N. high commissioner for human rights, Navi Pillay, said she wants Gadhafi's regime investigated for war crimes before the International Criminal Court in The Hague.

With reporting from NPR's Lourdes Garcia-Navarro in Benghazi and Tom Gjelten on the Libya-Tunisia border. This story contains material from The Associated Press.