Accessibility links
Foreign Policy: How To Hire A Mercenary In the wake of Libya's deadly protests, some are reporting that Libyan leader Moammar Gadhafi is hiring African mercenaries to form an army capable of defending him. Joshua E. Keating of Foreign Policy argues that hiring mercenaries is easiest if a leader has connections in post-conflict countries. 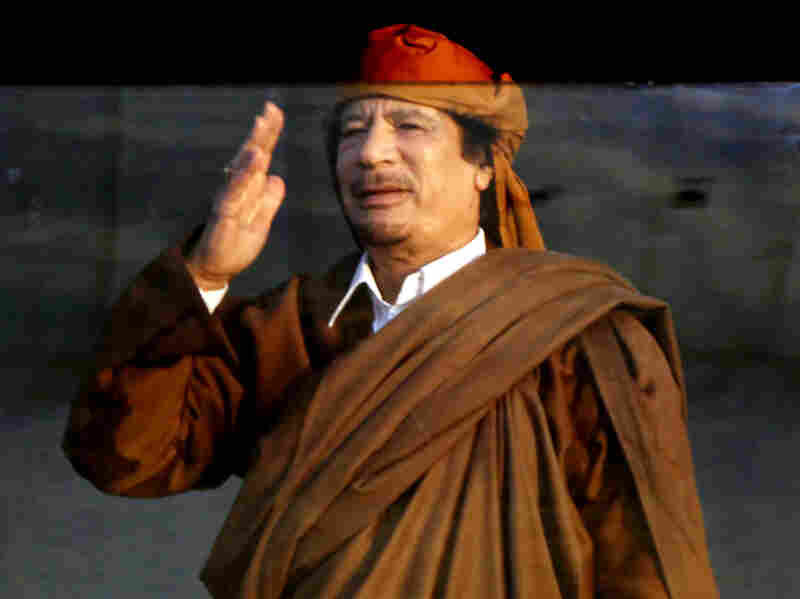 Libyan leader Moammar Gadhafi gesturing behind a bulletproof glass during a ceremony in Tripoli early last week before the current protests against his leadership became widespread. Some reports are now claiming that Gadhafi is hiring mercenaries to defend him. Mahmud Turkia /AFP/Getty Images hide caption 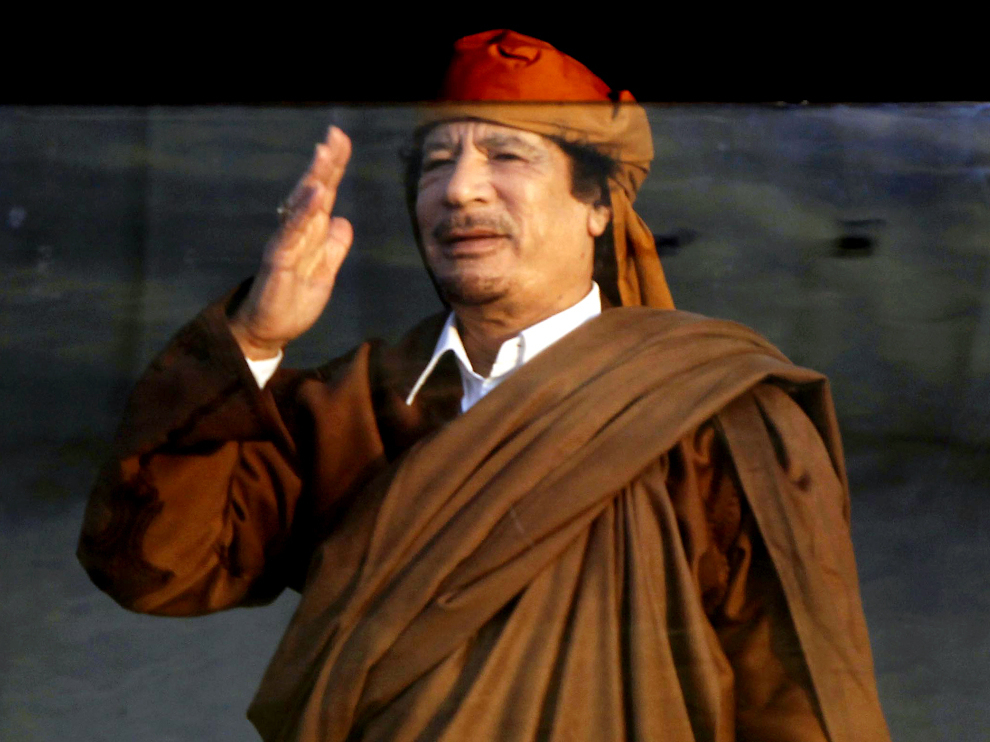 Libyan leader Moammar Gadhafi gesturing behind a bulletproof glass during a ceremony in Tripoli early last week before the current protests against his leadership became widespread. Some reports are now claiming that Gadhafi is hiring mercenaries to defend him.

As Libya cracks down on the ongoing protests against Moammar Gadhafi's government, reports have surfaced of African mercenaries attacking protesters and massing to defend the capital city of Tripoli. "They are from Africa, and speak French and other languages," said Ali al-Essawi, the Libyan ambassador to India who resigned this week. Libyan police in the town of Benghazi who have turned against the Gadhafi regime have reportedly captured foreign soldiers who are "black, spoke French and were identified by wearing yellow hats" stated an ABC News report. According to varying reports, the foreign mercenaries employed by Gadhafi may be from Chad, the Democratic Republic of Congo, Niger, Mali, Sudan and, even Eastern Europe. So how does one go about hiring mercenaries on such short notice these days?

It helps to have friends in the right places. Al-Jazeera has reported that advertisements have been appearing in Guinea and Nigeria offering would-be mercenaries up to $2,000 to come to Gadhafi's aid. The reports are vague so far, but if the Libyan strongman has indeed been shopping for mercenaries, West Africa would be a good place to start. Recent conflicts in Guinea, Sierra Leone, Liberia, and the Ivory Coast have generated a steady supply of unemployed ex-fighters willing to move from conflict to conflict for the right price. Foreign mercenaries, often paid in diamonds, kept Sierra Leone's brutal civil war going for years. U.N. peacekeepers have reported that the electorally ousted but defiant Ivory Coast President Laurent Gbagbo has brought in mercenaries from Liberia to aid him in his conflict against internationally recognized President Alassane Ouattara.

Libyan money has helped prop up a number of unstable African regimes in recent years — for example, Gadhafi was a longtime, enthusiastic backer of former Liberian President Charles Taylor, now on trial in The Hague for war crimes — so it makes sense that Libyan officials would have connections in the region. As of yet, there's no reliable reporting of how or when the mercenaries there, but some Libyan activists believe that they may have been housed at training camps in southern Libya for months, anticipating an uprising.

Mercenaries have a long and proud history in both warfare and conflict suppression. England's King Henry II hired foreign mercenaries to put down a domestic rebellion in the 12th century. The Italian condottieri ("Contractors") famously served various papal states in wars throughout the late Middle Ages. King George III hired German "Hessian" mercenaries to fight against the rebels in the American Revolution. Standing national armies didn't even become the norm until the 19th century.

The advantages to hiring mercenaries are obvious. Even at increased salaries, hiring foreign contractors for a single, specific mission is a lot cheaper than housing and feeding a standing army. And when it comes to domestic disputes, they are also likely to be far more willing to fire on civilians with whom they share no country, tribal, or social affiliation. But their limited liability has a downside as well, as the current situation in Libya proves: There have been reports of Libyan military officers defecting to the opposition out of anger at foreigners firing on their countrymen.

You don't have to be a down-on-your-luck autocrat like Gadhafi or Gbagbo to hire private armies in the modern era, however. The largest customer for the services of private warriors is, without a doubt, the United States, which now employs more military contractors than troops in Iraq and Afghanistan. Despite their bad reputation, military contractors can also be quite effective. DynCorp's training of the Croatian military during the Yugoslav civil war — on a U.S. contract — is thought to be a major factor in bringing Serbia to the negotiating table. The firm was later tapped by the Pentagon to help build Liberia's post-war professional army.

But let's be clear: Private military contractors like Blackwater (now known as Xe after the bad press following the killing of 17 Iraqi civilians), DynCorp, and Triple Canopy are not the same thing as Gadhafi's mercenaries. They are bound to follow the laws of the countries where they are based and operate and, in theory, are only hired for noncombat operations like guard duty (though that line is often a thin one in war zones). Mercenary forces in West Africa, by contrast, tend to be informal networks of ex-civil war combatants rather than formal corporations like Western private military contractors.

A number of companies and individuals also straddle the line between security contracting and outright mercenary work. Executive Outcomes (EO), a firm created by veterans of South African special forces units disbanded at the end of apartheid, worked on behalf of governments in Angola and Sierra Leone to help suppress insurgencies.

Executive Outcomes was dissolved in 1998 as South Africa cracked down on mercenary activity, but members of its alumni network have been involved in a number of conflicts around the globe. A number of EO vets were also instrumental in the founding of Sandline International, a company involved in a number of scandals including accepting a contract worth $36 million from the government of Papua New Guinea to put down a rebellion and violating a U.N. arms embargo in Sierra Leone.

Simon Mann, a former British commando and co-founder of Sandline, is currently serving a 34-year sentence in Equatorial Guinea for his part in a plot to bring down the country's government on behalf of a group of investors including, allegedly, Mark Thatcher, son of the former British Prime Minister.

Sandline stopped operating in 2004, but another of its co-founders, Tim Spicer, is now CEO of Aegis Defence Services, a private military contractor working for the U.S. government in Iraq and Afghanistan.