Accessibility links
Little Unrest, But Angst Grows In Saudi Arabia Even the merest hint of potential unrest in Saudi Arabia, which sits on a fifth of the world's oil reserves, is enough to spark fear in the oil markets and cause nightmares in Washington. Few analysts rule out the possibility of protests in Saudi Arabia, but they do say it is unlikely. 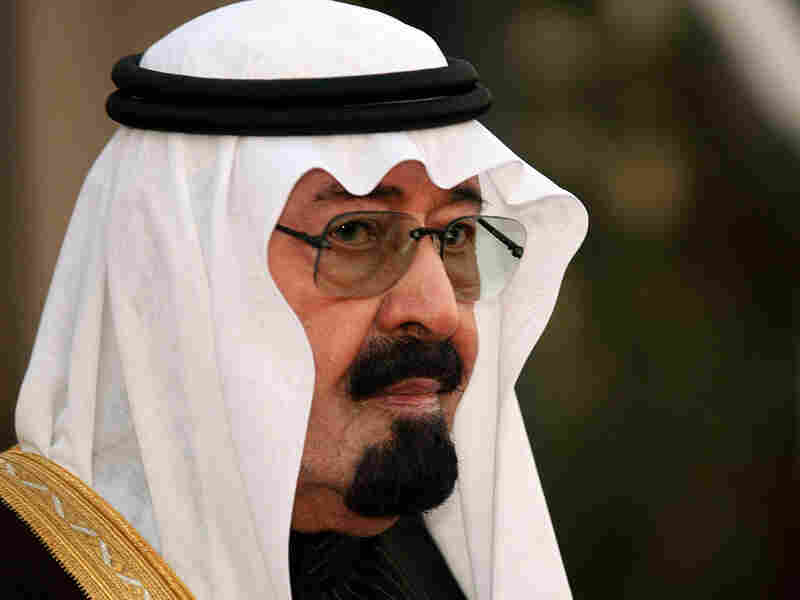 Before returning home to Saudi Arabia after medical treatments Wednesday, King Abdullah ordered a massive increase in the kingdom's development and state welfare payments — a move that some observers say was an attempt to stave off the popular unrest that is now sweeping the Arab world.

Even the merest hint of potential unrest in Saudi Arabia, which sits on a fifth of the world's oil reserves and is the third biggest source of oil for the United States, is enough to spark fear in the oil markets and cause nightmares in Washington.

Although there is little sign of any unrest in Saudi Arabia so far, there are growing political and economic frustrations.

After being caught by surprise by the popular revolts in the Middle East, few analysts will rule out the possibility of unrest in Saudi Arabia, but they do say it is unlikely.

NPR correspondent Deborah Amos is in Saudi Arabia and says the reason is simple: "The king is extremely popular, among young people and with reformers, too, unlike [former President Hosni] Mubarak in Egypt, and [former President Zine El Abidine] Ben Ali in Tunisia, who were deeply, deeply hated. They see [the king] as a reformer, and the changes he's introduced in the last two years have been startling."

The reasons behind the unrest that led to successful revolutions in Tunisia and Egypt and protests in Libya, Bahrain and elsewhere, vary from country to country. But there are three fundamental factors that nearly all have in common: economic deprivation, youth unemployment and political frustration.

No one questions the legitimacy of the regime, and the king is personally popular.

Saudi Arabia has all those problems, and more. With its massive oil wealth, the kingdom is one of the world's richest countries, but the money is not distributed evenly. There are many wealthy Saudis and an estimated 6,000 royal princes, but the average national income is around $20,000 a year and many Saudis live on the poverty line.

"Inflation has hit Saudis hard," Amos says. "There have been sharp increases in food prices, and you need two salaries to get by."

Most estimates put unemployment in Saudi Arabia at around 10 percent. But like nearly all Arab countries, Saudi Arabia is experiencing a massive "youth bump" in its population — about two-thirds of the population is younger than 29 — and the unemployment rate for young people is thought to be around 40 percent.

Like the other oil-rich Gulf states, Saudi Arabia has invested billions in education, including sending students to universities in the United States, England and Australia. Now all of these graduates, especially an entire generation of well-educated young women, are looking for ways to use their education — and there are limited opportunities for them.

The Kingdom of Saudi Arabia is run as a traditional monarchy, where political parties are banned and dissent is strictly punished. Although there are consultative councils set up to advise the royal family, they are appointed, not elected, and there are few ways for the poor, the young and minorities to get their voices heard. The king also carries the title "The Custodian of the Two Holy Mosques" — the holiest sites in Islam at Mecca and Medina — a position that makes it difficult for any devout Muslim to criticize him. On top of that, the ruling family also has a centuries-old relationship with a very conservative branch of Sunni Islam, which results in harsh enforcement of rules on public morality.

Robert Powell, Middle East analyst with the Economist Intelligence Unit, says young people in Saudi Arabia "are increasingly intertwined thanks to social media like Facebook and Twitter. They are more globally connected and culturally sophisticated — and they are increasingly frustrated with Saudi society, especially the law which restrict the mixing of men and women."

Add to these factors a massive generation gap — King Abdullah is 87, and his half brother and official successor, Crown Prince Sultan, is 82 — and Saudi Arabia would seem ripe for popular unrest. But Powell says there are a number of reasons why that might not happen.

"The first is that Saudi Arabia is unique, a very conservative society that resists change," he says.

Another, he says, is "the country's vast oil wealth. ... They can always 'splash the cash,' and we saw that with [King Abdullah's] move in spending $10 billion to address issues like the shortage of 200,000 new homes to help young Saudis still living with their parents."

Thomas Lippman, an analyst at the Council on Foreign Relations who has written extensively on Saudi Arabia, says he strongly doubts that there will be unrest in the kingdom "because no one questions the legitimacy of the regime, and the king is personally popular." Yes, Saudi Arabia has problems, Lippman says, "but the place is not stagnant as Egypt was. Everyone knows there is going to be change in the next few years" as the older members of the royal family die off.

There have been a few, very limited signs of unrest in Saudi Arabia — isolated reports of Saudis demonstrating for better pay, some criticism of the royal family on the Internet, heated political discussions among the country's large Shiite minority. These incidents, and the general sense of uncertainty hanging over the entire Middle East, are already driving the price of oil upward.

That nervousness is unfounded, says Powell, even if there's unrest in Saudi Arabia itself.

"I would not expect oil production to be affected," he says. "Saudi Aramco is a pretty effective company; the majority of the employees are Saudis, and the oil fields are very well guarded." Nonetheless, Powell says: "The markets are very twitchy, and the oil price could skyrocket. Saudi Arabia is not only a major supplier, it has covered loss of supply elsewhere by increasing production, and the markets are based more on sentiment than supply and demand."

Powell says as soon as the political situation stabilizes, the oil price will come down.

But even though the stability of Saudi Arabia is so vital to the United States, there seems to be little the U.S. can do to influence events there. Lippman says the U.S. "should keep our eyes open and our mouths shut. This is not about us." Powell says Washington "can only play the same delicate diplomatic game they've been playing elsewhere," trying to balance a desire for stability "with America's instinctive belief in freedom and democracy."

NPR's Amos says the unrest in the Middle East presents Washington with "one of the toughest foreign policy problems faced by any administration."