Accessibility links
The Nation: The 'Koch Caller' Exposes Scott Walker On Wednesday, it was confirmed that a caller pretending to be David Koch, a donor to the Tea Party movement, spoke with Wisconsin Governor Scott Walker over the telephone. John Nichols of The Nation argues that the prank conversation shows Gov. Scott Walker to be a politician with a big "vested interest" that conflicts with the citizens he represents. 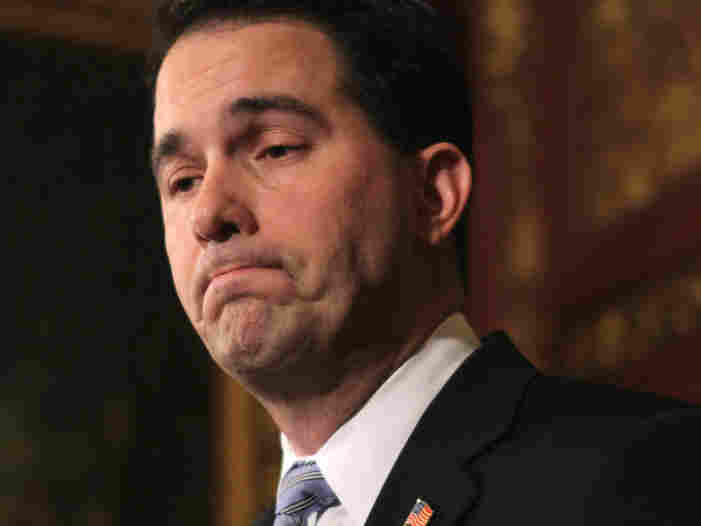 Wisconsin Governor Scott Walker speaks to the press outside his office at the Wisconsin State Capitol on Wednesday. It was confirmed on Wednesday that a caller pretending to be David Koch had a lengthy telephone conversation with Walker. Scott Olson/Getty Images hide caption 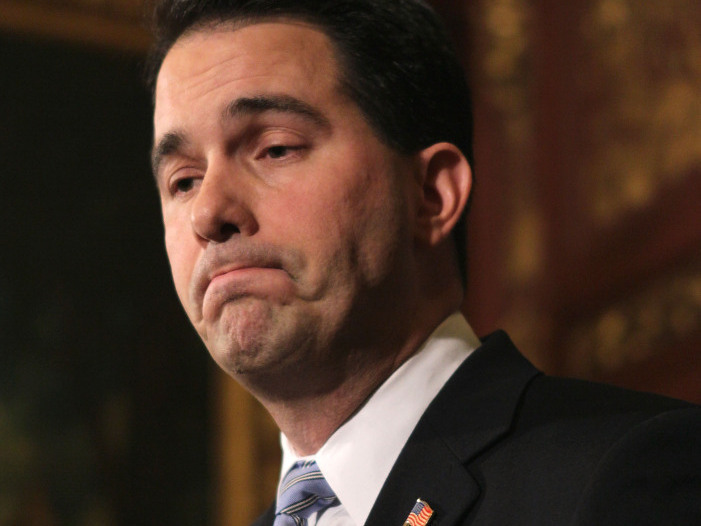 Wisconsin Governor Scott Walker speaks to the press outside his office at the Wisconsin State Capitol on Wednesday. It was confirmed on Wednesday that a caller pretending to be David Koch had a lengthy telephone conversation with Walker.

The phone rang in Wisconsin Governor Scott Walker's office and the caller identified himself as David Koch, the billionaire who has funded the Tea Party movement and whose business interests stand to benefit from the so-called "budget repair bill."

Then the caller, actually a prankster pretending to be Koch, and the governor joked about the "vested interest" Koch Industries has in the bill.

The twenty-minute call, which the governor's office has confirmed Walker participated in, raises questions about collaboration between the governor and benefactors of his 2010 campaign to enact legislation that would benefit those interests.

Those questions point to a more profound question: Has Walker violated Wisconsin's strictest-in-the-nation ethics rules, which require elected officials to "maintain the faith and confidence of the people of the state" when it comes to their actions?

Koch caller: "Well, I tell you what, Scott: once you crush these bastards I'll fly you out to Cali and really show you a good time."

Governor Walker: "All right, that would be outstanding. Thanks for all the support in helping us move the cause forward..."

Koch caller: "Absolutely. And, you know, we have a little bit of a vested interest as well. "

When someone who Scott Walker thought was a major donor to national groups that aided Walker's 2010 gubernatorial run — and that gave the Walker campaign $43,000 directly, via Koch Industries' KochPAC — said he had a "vested interest" in a budget plan being pushed by the governor, Walker replied, "Well, that's just it."

The conversation is so stunning in its brazenness that the Center for Media and Democracy, which had already filed freedom-of-information requests for records of contacts between the governor and his aides and representatives of Koch industries, is stepping up those demands.

"One request is for the phone logs and the other is for their e-mails. We are looking for any contacts between Scott Walker and his staff and anyone with Koch Industries or the Kochs (brothers David and Charles)," says Lisa Graves, a former deputy assistant attorney general of the United States who now heads the Madison-based center. "We are interested as well in calls to and from the group Americans for Prosperity, with which Mr. Koch is closely tied."

The remarkable conversation between Walker and the Koch caller — actually Buffalo, New York, blogger Ian Murphy — was the talk of Wisconsin Wednesday morning, as lawyers rushed to review the tape and the governor's office, perhaps even more remarkably, issued a press release saying: "The Governor takes many calls everyday. Throughout this call the Governor maintained his appreciation for and commitment to civil discourse. He continued to say that the budget repair bill is about the budget. The phone call shows that the Governor says the same thing in private as he does in public and the lengths that others will go to disrupt the civil debate Wisconsin is having."

The governor has not said in public that he is using his budget repair bill to advance the "vested interest" of a billionaire businessman who stands to benefit if the bill is approved.

The governor has not said in public that he is working closely with that businessman to coordinate Tea Party rallies and advertising to support the bill — and that he wants the businessman to use a front group, Americans for Prosperity, to launch a massive advertising campaign to support Republican senators who (despite the fact that they are troubled by the bill) choose to vote for it.

And the governor has not been the sort of accessible official who "takes many calls everyday" from constituents and concerned legislators. In fact, it's been quite the opposite.

The governor since proposing his bill has refused to meet with Democratic state legislators, with union leaders and with the hundreds of thousands of Wisconsin citizens who have been gathering around the state capitol in Madison and in city and town squares across the state to protest his sweeping proposal to bust public employee unions, begin the dismantling of healthcare programs for seniors and low-income families and begin selling of state power plants via no-bid deals with multinational corporations such as David Koch's Koch Industries.

But he took the call from the man who said he was Koch.

"This is ground-zero, there's no doubt about it," Walker tells his billionaire benefactor.

"This is our moment," says Walker.

"What more can we do for you?" asks the Koch caller.

In the conversation, Walker hailed the coverage of the story by the New York Times, which has written a string of news stories favorable to his initiative. The Koch caller talked about "the liberal bastards on MSNBC" and Walker agreed with the reference.

Walker hails a faked-up Tea Party rally — which the Koch caller said he had helped organize — as "good stuff." And they talked about using Koch-funded front groups to launch massive advertising campaigns to support the governor and his legislative allies.

Walker and the Koch caller joke about the protests, with Walker claiming — falsely — that "almost all of [them] are in from other states."

The governor says that "we thought about" planting troublemakers in the crowd.

They pair strategize about whether the Koch caller might contact Democratic state senators, who have gone to Illinois to prevent the chamber from having a quorum to act on the budget-repair bill.

Walker talks about how he and his legislative allies intend to use financial and legal threats to intimidate the senators. Walker specifically spoke of "threatening them." And the governor dismisses Senate minority leader Mark Miller, a retired military officer, as a "radical."

Walker talks about how he plans to send notices of potential layoffs to workers as a political tactic, not because of actual necessity.

Walker talks about trying to trick Democratic senators into coming back with an offer to talk to Senate minority leader Miller and then, once they were in the state, using procedural moves to claim a quorum and pass the bill.

Walker talks about how he might be the next Ronald Reagan, even recalling that before he began the budget-bill fight he held up a picture of the former president and said: "This is our moment. This is our time to change the course of history."

And then, after all of this back and forth, Governor Scott Walker and a man he thought was David Koch talked about the caller's "vested interest" in a budget-repair bill that could make a very wealthy campaign contributor a good deal wealthier.