Accessibility links
Claude Brown: Telling The Harlem Story New York's Harlem neighborhood was tough place to grow up in the 1940s and 1950s. Author Claude Brown experienced it and described it in his acclaimed book, "Manchild in the Promised Land". It's a coming-of-age story that explores the cultural, economic and religious conditions of that time and place. Brown went on write another book about the African American experience. 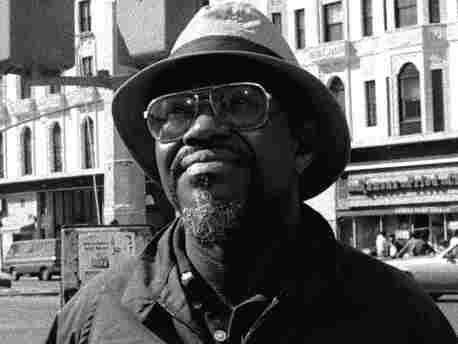 In his book Manchild in the Promised Land, the late author Claude Brown wrote about being a black youth growing up fast on Harlem's violent streets. He died in 2002 at age 64. Mario Cabrera/AP hide caption 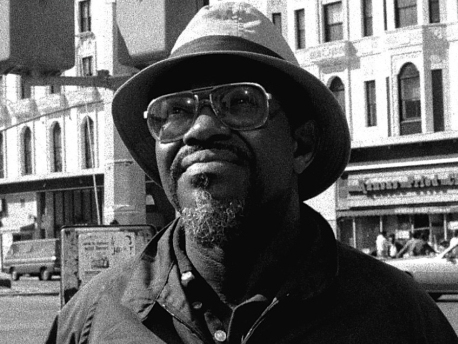 In his book Manchild in the Promised Land, the late author Claude Brown wrote about being a black youth growing up fast on Harlem's violent streets. He died in 2002 at age 64.

February is Black History Month and Tell Me More observes the month with a series of short vignettes. In this installment, NPR's Margaret Low Smith shares her black history hero.

When I was 13 years old, Claude Brown transformed the way I saw the world. He wrote the book Manchild in the Promised Land. It's a novel, but really an autobiographical sketch of his childhood on the streets of Harlem in the '40s and '50s.

Brown hung out with hustlers, drug dealers and prostitutes. His story sprung me from my suburban childhood and introduced me to another America.

When the story begins, the main character, Sonny, is 13 years old. He's been shot in the leg trying to rob a fish and chips joint. (The character is the same age I was when I read the book.) He'd been on the streets since he was 8 — running from the cops, truant officers and storekeepers.

Mama's favorite question was, "Boy, why you so bad?" I tried many times to explain to Mama that I wasn't"so bad." I tried to make her understand that it was trying to be good that generally got me into trouble. I remember telling her that I played hookey to avoid getting into trouble in school. It seemed that whenever I went to school, I got into a fight with the teacher. The teacher would take me to the principal's office. After I had fought with the principal, I would be sent home and not allowed back in school without one of my parents. So to avoid all that trouble, I just didn't go to school. When I stole things, it was only to save the family money and avoid arguments or scoldings whenever I asked for money.

Claude Brown ultimately found his way off the streets. Made his way to law school and to write Manchild — shining a light on where he came from — revealing humanity and hope in a place where most people only see despair.

The book has sold millions and millions of copies, a testimony to its resonance.

Brown's story captivated and inspired me. It had heart and humor, and I felt a profound connection to this kid.

It made me think about my own privilege and to wonder this: if I had nothing — and the odds were stacked against me — would I be able to find my way out?

I'll never know the answer to that question, but it has stuck with me my whole life.

Brown's greatest gift to me was that he sparked my curiosity about worlds and people I don't know.

And he helped me see courage and desire, not only in people who are just like me, but in everyone.