Accessibility links
A Call To Slow Down California's High-Speed Rail Residents of Corcoran, Calif., an agricultural community with a high unemployment rate, question whether the state's high-speed rail line will move its economy forward or leave a trail of unpaid bills. A state legislator is leading the call for reassessing the plan. 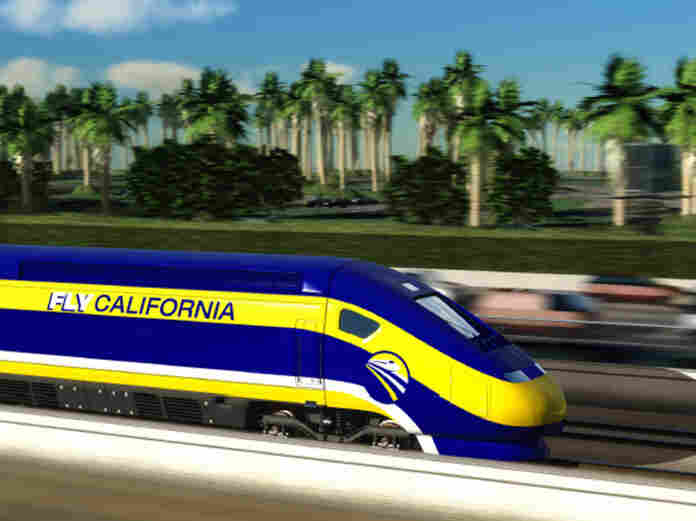 An artist's conception of a high-speed rail car in California. A proposal to build the first segment of California's high-speed rail through the state's agricultural heart is raising questions. AP hide caption 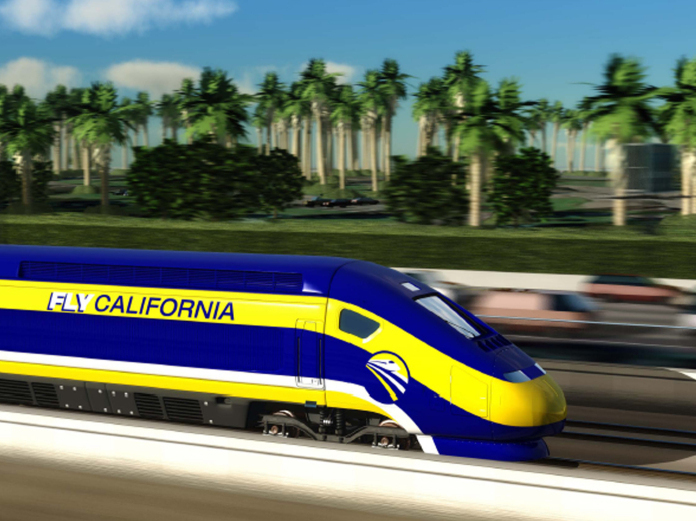 Florida, Ohio and Wisconsin have turned down billions of federal dollars for high-speed rail. But California is moving forward with its high-speed rail project and welcomes the federal money the other states left behind.

The first leg of California's train is set to run between Fresno and Bakersfield — two cities in the state's breadbasket region.

Critics of the plan say it doesn't make sense to put a passenger train in the middle of farmland during a fiscal crisis. But the California High-Speed Rail Authority says the Central Valley is a smart place to begin laying down track. The agency says there's plenty of space, it will bolster the sagging economy, and the train will have to run through that part of California to connect the San Francisco Bay Area to Los Angeles.

A Train Through Farm Country

Corcoran, Calif., a small farming community, is smack in the middle of the first leg. City Manager Ron Hoggard compares his town to the Andy Griffith Show's Mayberry. That analogy would be dead-on if nearly half of Mayberry's population was behind bars. Of the 25,000 Corcoran residents, 12,000 are wards of the state. Corcoran is home to two prisons and a lot of farmland, and the city has an unemployment rate of 17 percent.

With lots of open space and a bad economy, Corcoran represents the path of least resistance for California's controversial high-speed rail project. But Hoggard and Mayor Larry Hanshew are still not convinced that high-speed rail is a good idea.

"Why start something if you're not going to finish it?" Hanshew says. "And the jobs that it would create for Corcoran are fantastic — that's great — we love it, we need it, we want to see the economy of Corcoran begin to thrive. But sometimes you wonder, at what cost?"

Hanshew runs through his list of unanswered questions: Will the jobs created be permanent? Where will the tracks go? How noisy will it be? And is there enough money to finish the project?

Is There Ample Funding?

On top of those worries, he's fielding concerns from locals who are convinced that a bullet train will kill their livelihoods.

Barrie Boyett, who has been farming in Corcoran for the past 50 years, says he doesn't know exactly where the train will go, but he's pretty sure it's going to run right through his ranchland.

"It'll ruin our ranch, I mean absolutely ruin it," he says, smacking his leg for emphasis. "And I know how the government works: They'll buy the land at the cheapest price they can get it for."

What Boyett doesn't know or understand is why California is moving ahead with high-speed rail without the $45 billion needed to finish it.

"I don't plant a crop until I know I've got the money to finish that crop," the exasperated farmer says.

Jeff Barker, the deputy director of the California High-Speed Rail Authority, says a better analogy is comparing the project to the purchase of a house.

"I think there are very few people who save their pennies in a bank and wait until they have the entire $250,000 sitting in their hand before they get the keys to their home," he says.

Barker says the process begins with a good down payment. California, he says, already has one — $3.6 billion in federal money and nearly $10 billion from California taxpayers.

He says now is the time to act — before California's population grows by one-third in the next two decades. It's projected to increase to 50 million people, up from 38 million today.

"We can wait until everything is gridlocked, or we can do what governments are supposed to do, which is look to the future, plan for future growth [and] invest in our infrastructure now," Barker says.

A State Senator's Call For Reassessing The Plan

State Sen. Alan Lowenthal, a Democrat from Long Beach, agrees that high-speed rail is an investment in California's future. But he wants everyone to take a step back and reassess the current plan.

Lowenthal just introduced a bill that would, if passed, replace the current board of California's High-Speed Rail Authority with experts vetted by the state government. He doesn't trust the authority's ridership numbers, its estimated cost for the project or its decision to put the first leg in farm country.

"I just really would like us to take a deep breath, not to make decisions because there's a gun to our head. Because unless we make this decision, we're going to lose this federal money, because still, the largest contributors are the people of California, and we need accurate data," he says.

Barker welcomes legislative help that will move the project forward. But he thinks taking too much time will mean the end of the line for high-speed rail in California.