Accessibility links
The Real-Life Drama Behind 'West Side Story' Written in the mid-1950s, West Side Story showcased adult themes and harsh language, which was bold for musical productions. Sara Fishko reflects on its behind-the-scenes tension and cultural impact. 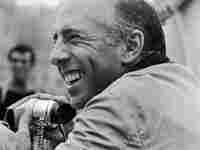 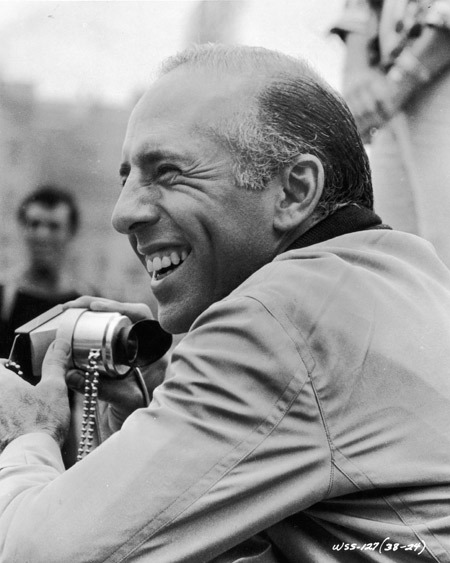 Choreographer Jerome Robbins created real animosity and antagonism between the two opposing gangs, both on and off stage. 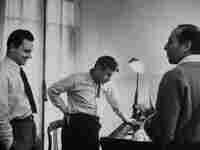 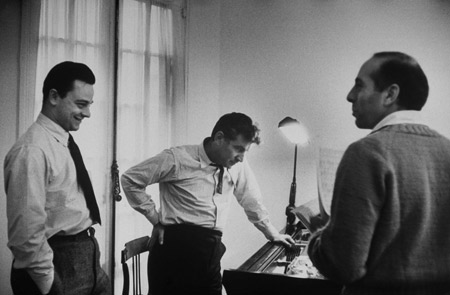 I was 10 or 11, and I'd been swept off my feet: I'd just seen West Side Story. I practically flew downstairs to talk to a neighbor of ours — a filmmaker who was an old family friend. 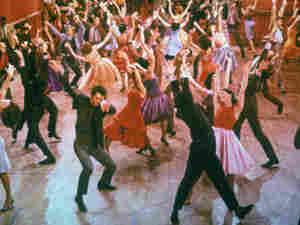 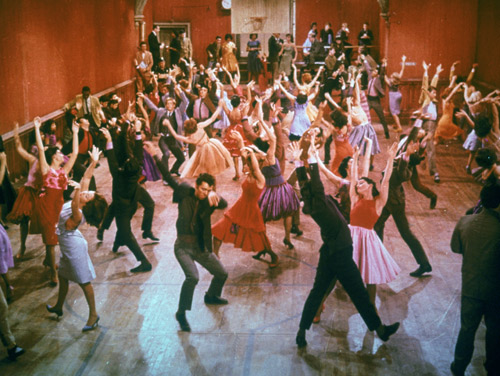 Written in the mid-1950s, West Side Story pushed the envelope for musical productions during conservative times.

I was stunned. The music? "Tacky, sentimental stuff," he said. Even the dancing? He laughed. "Especially the dancing."

I turned this over in my mind for years afterward. Later, I learned that the neighbor I'd talked to that day was one of about 10 people named as a Communist by Jerome Robbins, legendary choreographer for West Side Story — and former Communist Party member — in his friendly testimony before the House Un-American Activities Committee. Robbins was a homosexual in the closet, like so many gays at that time, and some believed he'd been threatened with exposure and had buckled under the pressure. Others thought he was just ambitious, and wanted to make sure the blacklist wouldn't get in his way.

That's the 1950s for you. There was always a lot going on under the surface.

It was Robbins who dominated the production of West Side Story, which had been written in the mid-'50s by Arthur Laurents, Leonard Bernstein and a young Stephen Sondheim.

"West Side Story is 1957; we were really just coming out of the McCarthy era," says Gregg Lawrence, author of the Robbins biography Dance With Demons. "He was one of those who was terrorized and named names, and it really shaped him for the rest of his life."

It had been Robbins who came up with the original idea of a modern, urban Romeo and Juliet; Bernstein and Laurents added the idea of warring street gangs in place of Shakespeare's feuding families. In the play, a Puerto Rican girl named Maria, whose brother is in one gang, loves Tony, who's in the opposing "American" gang.

"That kind of bigotry and prejudice was very much in the air," writer and co-creator Arthur Laurents says. "It's really, 'How can love survive in a violent world of prejudice?' That's what it's about."

Tension On And Off Stage

Laurents says that there were strong undercurrents in rehearsal: "So many people who I spoke with described the production itself as a gang war."

"Jerry [Robbins] had declared that first day that the stage was a battleground," adds Carol Lawrence, who played the original Maria on Broadway in 1957. "You were never allowed to walk on that stage except at his request; he was absolute dictator.

"He brought this Method-acting technique into the show," Lawrence says, "where he deliberately tried to foment animosity, antagonism, between the two opposing gangs, both on stage and off stage. They weren't allowed to eat together. They were not supposed to socialize."

In the '50s, that tension was real. Grover Dale, the original "Snowboy" (one of the Jets) in the production, lived on W. 80th Street when West Side Story was happening.

"There were gangs right there, and I walked past guys that were doing the catcalls that I was delivering on stage," he says. "Where do you think I learned how to do that? On 84th Street is where the rumbles were happening."

West Side Story brought that tension inside, even within the constraints of a more repressive time.

"There are no four-letter words in it. You couldn't use 'em in those days," Laurents says. "A scene that I wrote ended with, 'Hey, Officer Krupke, krup you!' And they said 'brass ass.' Well, that was considered shocking and daring. It must have been 20 years later before they used four-letter words so freely.

"The idea was to do something good," he adds. "I think we were all in love with musical theater. I don't think any of us thought of the commercial possibilities of the show. I thought it would last, if we were lucky, three months."

Consider this: It was ardently, feverishly heterosexual musical theater, created by four gay men at a time when it was even less acceptable to be gay than it was to be Leftist. But Arthur Laurents says that's beside the point.

"It's four Jews," Laurents says. "There's a big difference. It's true. I think being part of a minority... I know gays were a minority, but gays didn't figure much in the '50s. Jews figured then, now and always. But I think that was more what we had in common, what drove it — drove the feeling of injustice, at any rate."

But the bigger question revolves around how Leonard Bernstein and Arthur Laurents, both of them blacklisted, found a way to work with Jerome Robbins? After all, it was only a few years after Robbins had cooperated with the forces responsible for the blacklist.

"Since then, looking back," Laurents says, "I'm not very proud of myself for ignoring the fact that Jerry informed, because that validated him. And I had to face that. I can explain what I did; I don't condone it. We were all so involved in the making of the piece that extra-curricular affairs, as it were, didn't enter into it. There were no fingers pointed. It was not a good time. Anybody who went through it, it still comes up almost every day, and it's us, and it's them."

How did a 1957 audience greet the spectacle of West Side Story?

"I think the innovation was having death, attempted rape, murder in a musical, in musical theater," Laurents says. "The subject matter — bigotry and violence and prejudice — and [the idea] that people would pay money to see that with an orchestra."

"The opening night in Washington, D.C.," Carol Lawrence says, "when the curtain went up for our curtain calls, and they had just seen Tony's body taken over and the strain of 'Somewhere' and just a bell tolling -– still breaks me up — we ran to our spaces and faced the audience holding hands. And the curtain went up and we looked at the audience, and they looked at us, and we looked at them, and I thought, 'Oh, dear Lord, it's a bomb!' "

"We thought the thing was going down the drain," Laurents adds. "Oh, it was awful."

"And then, as if Jerry had choreographed it," Lawrence says, "they jumped to their feet. I never saw people stamping and yelling, and by that time, Lenny had worked his way backstage, and he came at the final curtain and walked to me, put his arms around me, and we wept."

Walter Kerr of the Herald Tribune opened his review with the classic and much-repeated line, "The radioactive fallout from West Side Story must still be descending on Broadway this morning."

There's that '50s imagery, though neither on stage nor in life did West Side Story have a '50s-style Ozzie and Harriet ending.

"I never said anything to Jerry until the show was frozen in Philadelphia," Laurents says. "And then I told him I thought he was an immoral, indecent man. I don't know how much it mattered to him."