Accessibility links
Fungus Knocks Out Malaria In Mosquitoes The malaria parasite remains one of the most complex and fast-evolving organisms on the planet, forcing scientists to look in unconventional places for ways to defeat it. The latest technique: Stuff the mosquito full of a particular type of fungus, killing the parasite inside before it infects humans.

Scientists have come up with a new approach to controlling malaria. Instead of killing the mosquito that transmits the malaria parasite, the researchers have found a way to let the mosquito live, while killing the parasite inside it. 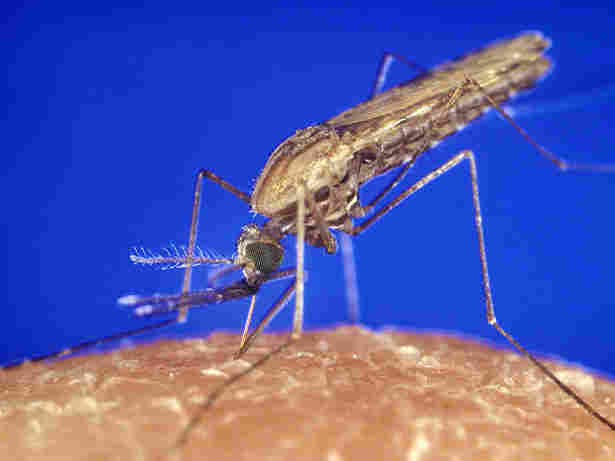 Scientists hope to use a fungus to keep malaria-carrying mosquitoes like the Anopheles gambiae species from growing resistant to insecticides. Courtesy of James Gathany/CDC hide caption 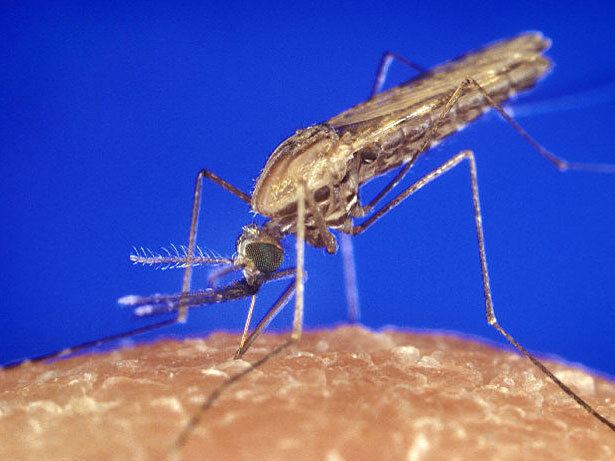 Scientists hope to use a fungus to keep malaria-carrying mosquitoes like the Anopheles gambiae species from growing resistant to insecticides.

The technique involves a fungus called Metarhizium anisopliae. It's a fungus that can penetrate directly into a mosquito.

"The insect literally fills up with fungus," says Raymond St. Leger of the University of Maryland. Ultimately, filling up with a fungus is a bad thing for the mosquito. With time, the fungus will kill the mosquito, but at first, it's just an annoyance to the insect.

St. Leger realized that he could use the fungus to do things inside the mosquito. "The trick we did was to engineer the fungus so that it produces a protein which is anti-malarial, anti the parasite itself," he says.

You don't get malaria by being bitten by any old mosquito, or even one of the 30 to 40 species within the Anopheles genus that can transmit malaria. You have to be bitten by a mosquito that is actually carrying the malaria parasite.

The fungus acts like a little hypodermic syringe, and when it's in the blood of the insect, the fungus then produces the anti-malarial protein, and within a couple of days it basically cures the mosquito of malaria.

What St. Leger's genetically engineered fungus does is rid the mosquito of the parasite. "So the fungus acts like a little hypodermic syringe, and when it's in the blood of the insect, the fungus then produces the anti-malarial protein, and within a couple of days it basically cures the mosquito of malaria," he says.

If the mosquito isn't carrying the malaria parasite, it can't spread the disease. These findings appear in the latest issue of the journal Science.

St. Leger says it's also possible to genetically engineer the fungus to kill the mosquito quickly. And he and his colleagues have done that.

Staying An Evolutionary Step Ahead

"One by one, these defenses have fallen, as the mosquitoes have managed to outflank every attempt we've made to control them by some evolutionary trick or other," says St. Leger.

But because the fungus takes its own sweet time to kill the mosquito, the pressure to use one of those evolutionary tricks to evade the fungus is not as great as it would be with a more lethal insecticide.

"Of course, it does open up the prospect that the malaria could become resistant to whatever you put in the fungus," says Andrew Read, a senior scholar at the Center for Infectious Disease Dynamics at Penn State University.

Clearly, the malaria parasite can develop resistance to drugs used to treat it. But Read says it should be possible to modify the anti-malarial proteins in the fungus to keep one step ahead of the parasite.

Although this new approach has only been tried in the lab, Read says it should be ready for field testing before too long.

"It's already approved for agricultural use for locust control," says Read, although that's for a version of the fungus that hasn't been engineered to produce anti-malarial proteins.

Getting approval to release a genetically modified fungus into the environment will probably take longer. But Read thinks it will be worth the effort. "One of the great things about this paper is it does raise the scientific interest a lot in the fungi as injection systems into the mosquito," he says.

It's an approach that might be useful for other diseases carried by mosquitoes, as well.