Accessibility links
Child's 11,500-Year-Old Remains Unearthed In Alaska Archaeologists made the discovery in a settlement that housed some of the very first North Americans. Researchers have been studying the region for more than 70 years, but until now have not found anything from that time period. 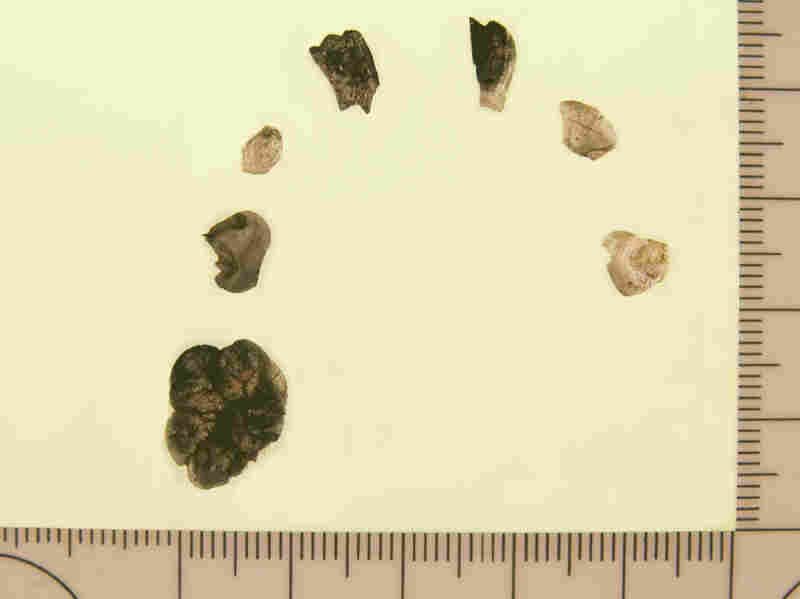 Teeth from a cremated child were excavated from a site believed to be 11,500 years old. The color differences show uneven burning. The scale is in millimeters. Science/AAAS hide caption 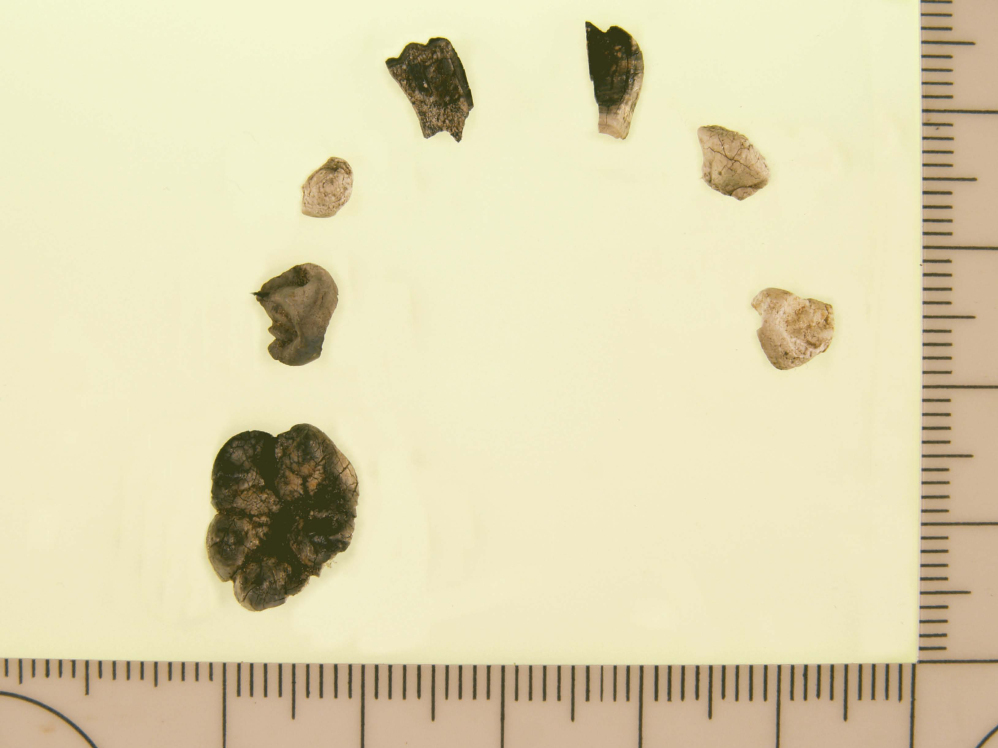 Teeth from a cremated child were excavated from a site believed to be 11,500 years old. The color differences show uneven burning. The scale is in millimeters.

Archaeologists in Alaska have been given a rare glimpse into family life — and death — for some of the very first North Americans.

The researchers discovered the remains of a home in a settlement created by people who probably migrated from northern Asia about 12,000 years ago. They got there by crossing the so-called Bering Land Bridge — a strip of dry land that connected what is now Russia and Alaska — and they left behind the foundations of a house, tools and the cremated remains of a child.

Ben Potter, an anthropologist at the University of Alaska Fairbanks, says the home dates back 11,500 years.

"Collectively, the archaeologists in the region, we've done 70-plus years or more of research, and nothing remotely similar has been found from this time period, so it's quite overwhelming," says Potter.

Signs of human occupation have been discovered in North America dating back even earlier. But in this case, the archaeologists found more: the foundation for a house dug into the ground, and inside, a pit built for a cooking hearth. They also found bones of creatures including salmon, squirrels and rabbits.

Their most notable find, reported in the journal Science, was the child, who had been cremated in the cooking hearth. Potter offers a perspective on what he thinks could have happened:

"They were using the house, using the hearth, then the child died," he says, "The child was laid on the surface of the hearth. We can identify this because all the food elements were below the human remains. They immediately backfilled and probably abandoned the site at that point." 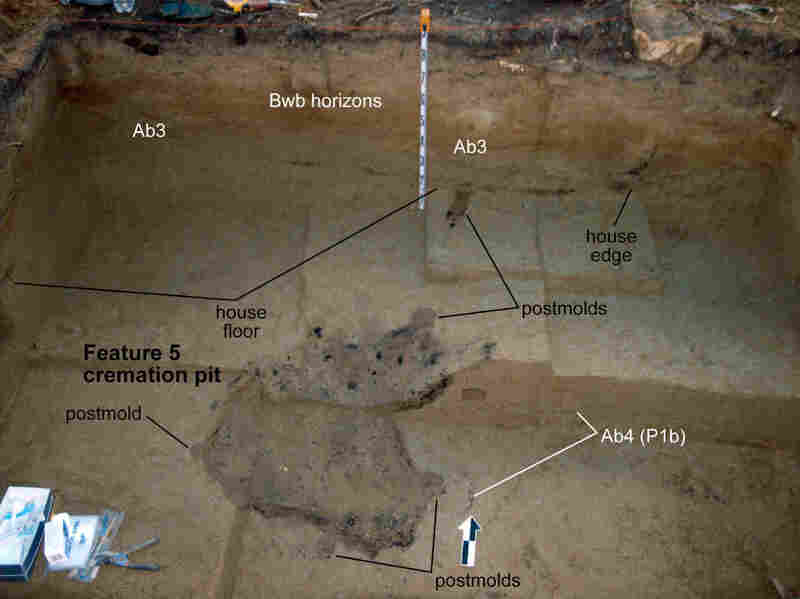 A photograph of the excavated burial site, with annotations by the researchers. In the center is the cooking hearth, where a 3-year-old child was cremated before the home was abandoned. Science/AAAS hide caption 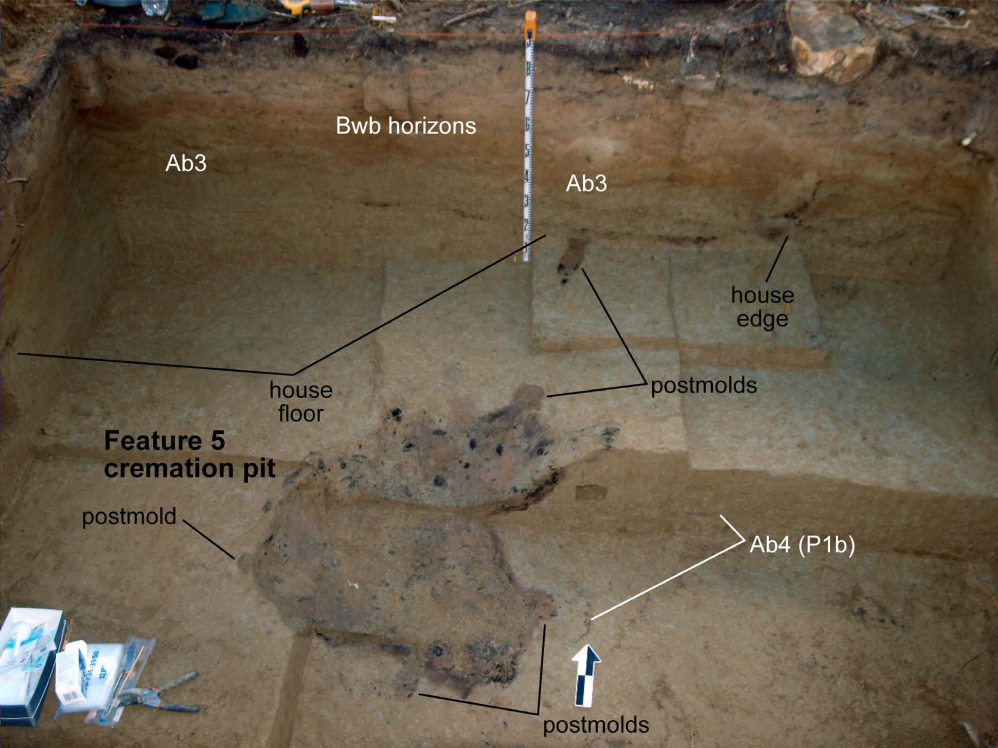 A photograph of the excavated burial site, with annotations by the researchers. In the center is the cooking hearth, where a 3-year-old child was cremated before the home was abandoned.

Essentially, they turned the house into a crypt.

Burying a child in a house is not unique to hunter-gatherer societies — the practice has been documented in eastern Asia, though the bodies were not cremated there.

A dental expert with the team, Joel Irish, says many of the Alaskan child's teeth survived. They indicate he or she died at about age 3. There was no sign of foul play, but there were signs that the child indeed came from Asia — some of the front teeth had a slight shovel-shape.

"That is a northeast Asian, Native American trait, so this child does have some affinity to native populations," Irish says.

Scientists believe the land bridge was covered with water just 500 years or so after the time this house was abandoned, so these could have been among the last people to arrive over the bridge.

Their lives might well have been quite different from those of the immigrants who got here earlier — archaeologists say culture and tools changed rapidly once people arrived in North America. But Potter says these Alaskans, or Beringians, as they are called, were still rooted in Asian culture and tool-making.