Accessibility links
New Republic: Iran Green Movement Needs Water Last week, Iran's government cracked down on an uprising in Tehran, while at the same time praising the protesters in Bahrain. Abbas Milani of The New Republic argues that with the blatant hypocrisy of Iran's government on full display, it is safe for President Obama to throw all of his support behind Iran's aspiring opposition, the Green Movement. 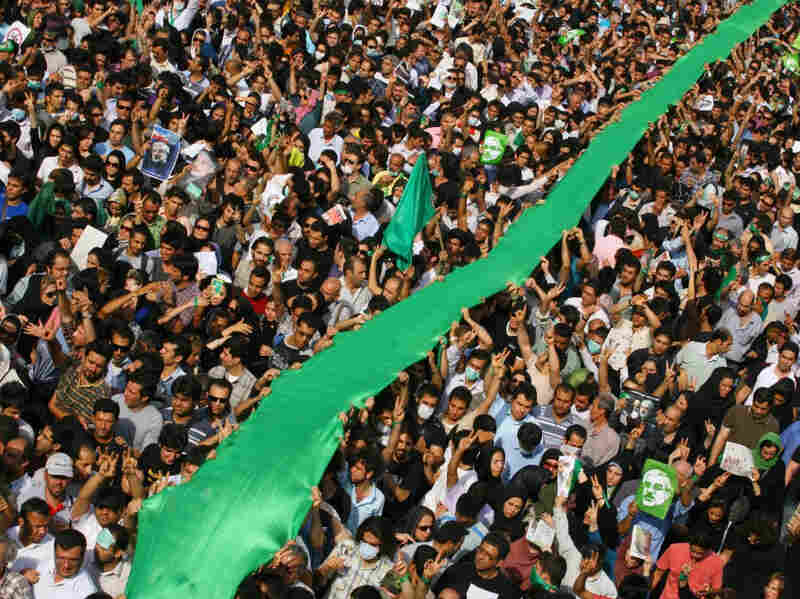 Iranians carry a large green flag through the crowd as they demonstrate in the streets on June 15, 2009 in Tehran, Iran to protest the re-election of Iran's President Mahmoud Ahmadinejad. Getty Images/Getty Images hide caption 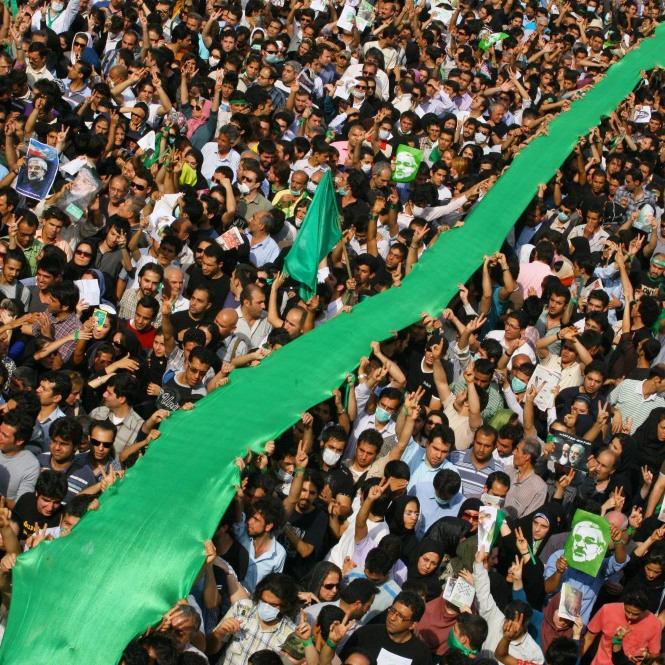 Iranians carry a large green flag through the crowd as they demonstrate in the streets on June 15, 2009 in Tehran, Iran to protest the re-election of Iran's President Mahmoud Ahmadinejad.

Abbas Milani is a New Republic contributing editor and the Hamid and Christina Moghadam Director of Iranian Studies at Stanford.

When protests erupted on the Iranian streets in 2009, President Obama adopted a deliberately cautious tone. Mindful of the fact that he was simultaneously trying to convince the regime to abandon its nuclear program — and afraid that his open support would make an indigenous revolt seem like a tool of foreign influence — the president condemned the use of violence against the Green Movement, but stopped short of backing their heartfelt calls for freedom and democracy.

And again on Feb. 14, many of Iran's major cities were rocked by thousands of brave and determined demonstrators, who defied a government ban on protest and took to the streets. This time, Obama has gone further: He has offered "moral support" and, for the first time, his national security adviser has issued a statement supporting the Iranian democrats. But the president has yet to appreciate the potential impact that a truly vigorous, full-throated, forceful stand in favor of the Green Movement could have on the Middle East at this moment — because the hypocrisy of the Iranian regime is currently on display like never before.

The latest protests were the first time that Mir Hossein Mousavi and Mehdi Karroubi, the Green Movement's leaders who had called for the demonstration, openly engaged in an act of civil disobedience, inviting their followers to come out in spite of a threatening government ban. It was whispered on many Iranian websites and blogs that the reason Egypt's million demonstrators could bring down their government, while Iran's three million could not, was that the Green Movement had been truly green and inexperienced: They had simply demanded reforms, whereas it should have been clear even in 2009 that no credible reform was possible within the existing structure of power.

Khamenei and his cohorts responded with maximum force. More than 200 members of the Majlis, Iran's parliament, turned the supposedly dignified setting into a scene more reminiscent of the beer gardens filled with brawling Brownshirts. These "lawmakers" gathered in a circle, shouting and demanding the death of opposition leaders, Mousavi, Karroubi, and even Khatami, who had nothing to do with the demonstrations. A sudden, remarkable surge in the number of executions occurred in Iran's jails, obviously calculated to frighten people from participating in any future demonstrations. Everyone in a key position of power, and even those who had retired, was forced to issue a statement supporting Khamenei. (The uniformity of these announcements was startlingly similar to the hackneyed shows of fidelity "to the party" under Stalin or Mao.) And in the days following the demonstrations, the regime shamelessly announced that 1,500 people had been arrested. Afraid of the repercussions of either arresting Mousavi and Karroubi or of leaving them free to continue their open defiance, the regime has now put Karroubi, Mousavi, and his wife, Rahnavard, under house arrest.

Most striking about this horrifying crackdown was the hypocrisy of the Iranian government's rhetoric. Worried that developments in Egypt and Tunisia would invigorate Iranian democrats, the regime offered a counter-narrative that argued that these events were actually reverberations of the 1979 Revolution. The fact that the official site of the Muslim Brotherhood in Egypt has more than once rejected Khamenei's claim, insisting that Egypt is experiencing a democratic and not an Islamic revolution; the fact that the head of Tunisian Islamic forces declared, upon returning to his country after twenty years of exile, that he is neither a Khomeini nor a bin Laden; and finally the fact that the Al Azhar, the oldest university in the world, and the most important center of Sunni theology in the world, issued a statement condemning Khamenei's interference in the domestic affairs of Egypt, and condemning the Iranian regime's abuse of Islam and the Quran, have not deterred the Iranian regime from repeating its illusory claims. It mattered little to the Iranian regime that, during the same period where it was shooting members of the Green Movement in the streets, it was demanding that the Bahraini government respect its people's right to demonstrate, and it had spent the last several weeks lambasting Mubarak for using violence against his people.

The regime's Orwellian cynicism became even more apparent in its response to the news that two young members of the opposition had been killed in Tehran by security agents. From reading opposition websites, I was able to glean what happened: The regime virtually abducted the bodies of those two young men it had killed, and had its thugs act as pallbearers, while shouting anti-opposition slogans. When pictures of one of the dead activists surfaced, providing incontrovertible evidence of the young man's close collaboration with the Mousavi campaign, and when his brother declared categorically that his brother was with the opposition, Hussein Shariatmadari, a close confidante of Khamenei and the editor of Keyhan (the mouthpiece of Khamenei), came up with the bizarre story that the activists had actually been Shariatmadari's "double agents." The brother who dared defy Big Brother's new "truth" was of course put in jail. In Persian, mordeh-khori is a pejorative, denoting those who try to pinch parasitical benefit from the martyrdom of others; as one website close to the opposition described it, this is a novel form of mordeh-khori, "murderers mourning the death of their victims."

Regimes like the Islamic Republic of Iran, which base their survival on fear and intimidation, constantly face the danger of that elusive moment when suddenly the once intimidated masses lose their fear. The Iranian people, three-fifths of whom are under the age of 30, and more than 30 million of whom are connected to the Internet, are clearly searching for that moment, and testing the limits of the security forces' fealty to the current regime. The recent report that some commanders of the Islamic Revolutionary Guard Corps (IRGC) have, in the last week, written a letter to their superiors indicating an unwillingness to shoot at the people is, if true, the first credible crack in the pillars of the regime's apparatus of operation. Other parts of the security apparatus — the Artesh (or military) and the police — have already shown signs of unwillingness to participate in the murder of their fellow citizens. It is also not clear how many of the hundreds of thousands of basijis — gangs-cum-militia — who joined that organization primarily to benefit from the "perks" of membership, will kill their neighbors or family. And the fact that the powerful Ayatollah Rafsanjani, in spite of increasing pressure on him to clearly side with Khamenei, has still refused to do so further indicates the depth of the fissures within the clerical establishment.

Thus, it is time to speak up for democratization. With the hypocrisy of the Iranian regime so exposed, President Obama should no longer be worried that full-throated rhetorical and political support for the protesters could redound against the United States. And now that the international community is united around sanctioning Iran for its nuclear activities, there is less need for Obama to assure Khamenei that he does not want regime change. Along with other members of the international community — particularly Turkey — the United States should further isolate the regime, thus serving notice to them that continued brutality against the people will beget it a fate similar to South Africa. (Turkey, too, must be reminded that it cannot be the leader of a democratic Middle East while embracing the region's most brutal regime.)

It is by no means clear that the government in Tehran will crumble next week, next month, or even in the next decade — yet the same thing could have been said about Egypt, Tunisia, and Libya, ten years, a month, or even a week ago. Moreover, the benefits for the Middle East could be truly breathtaking: With Egypt on a perilous path to possible democracy, and with Turkey already a working democratic polity, the advent of democracy in Iran could easily tip the regional balance toward democracy, rule of law, and reason. By supporting the Green Movement along with other liberal movements throughout the Middle East, Obama can help to make it so.