Accessibility links
Ripple In Libyan Oil Markets Make Waves Worldwide The unrest in Libya has caused a spike in prices even though its oil hasn't stopped flowing. One reason: All oil isn't created equal, and Libya's sweet crude might not be easily replaced by merely boosting production of Saudi Arabia's sour crude, experts say. 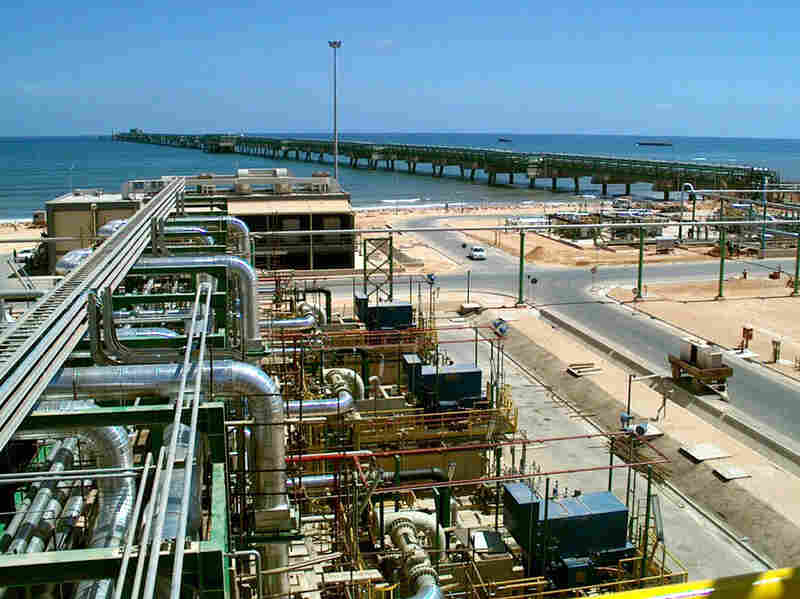 A production plant on the short of Mellitah, Libya, opened in 2004. Owned by Eni, the Italian oil and gas company, the facility is part of a pipeline that connects Libya to Sicily. Political unrest in the African nation is having effects in the worldwide oil market. Eni Press Office/AP hide caption 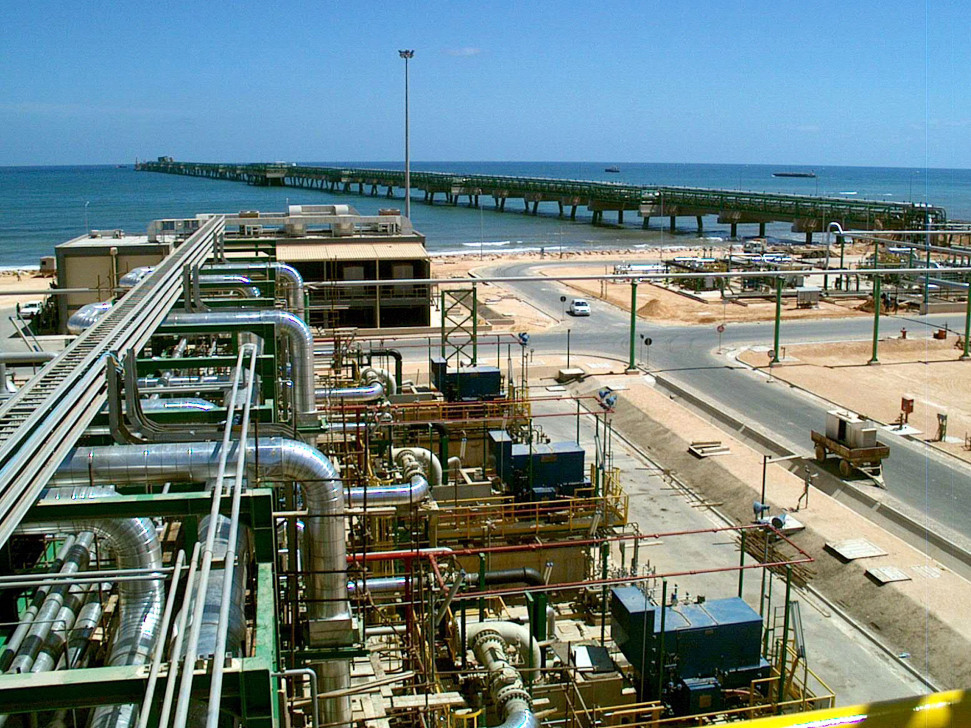 A production plant on the short of Mellitah, Libya, opened in 2004. Owned by Eni, the Italian oil and gas company, the facility is part of a pipeline that connects Libya to Sicily. Political unrest in the African nation is having effects in the worldwide oil market.

The unrest in the Middle East continues to spin the oil market. After Libya erupted into violence, the price of a barrel shot up to heights not seen in over two years.

Oil is still flowing from Libya, but a ripple in the Middle Eastern oil supply creates waves all over the world.

"It's deja vu all over again," says Philip Verleger, an oil economist at the University of Calgary. Verleger points to political convulsions in Iran, Kuwait and Iraq that have caused oil prices to gyrate since the 1970s.

This time, Libya is in trouble. If all Libyan wells shut down, only 2 percent of the world's oil would be curtailed. But Verleger says not all oil is created equal.

"It happens that Libyan crude has almost no sulfur and produces a great deal of diesel fuel per barrel of crude, which means it is very valued," he says. "One can think of it as fat-free milk."

Libyan oil is light and sweet — it's the kind that refineries want for making low-sulfur diesel, which is widely desired in Europe, and jet fuel, of which the U.S. makes a lot. Both markets require low-sulfur fuel because it pollutes less.

Saudi Arabia does have several million barrels a day of excess capacity, but Saudi oil isn't light and sweet — it's heavy and sour.

"So the loss of the Libyan crudes may not be easily replaced by just boosting Saudi production," Verleger says. "In theory you might need 4 barrels of Saudi crude for 2 barrels of Libyan crude to get the same amount of diesel, but if you don't have the capacity to take out the sulfur, the Saudi crude is useless."

The good news is, more refineries are set up to remove that sulfur now. As Charles Drevna, the head of the National Petrochemical and Refiners Association explains, refineries are retooling to expand their options.

"Most companies are trying to use a wider array of crudes, being able to process this — that's why there's been a lot of modifications to refineries," says Drevna.

Anxiety In The Oil Markets

But will they be able to get their hands on enough oil in the first place? Jim Burkhard, a managing director at IHS Cambridge Energy Research Associates, says right now, worldwide demand is galloping ahead, largely driven by economic growth in China and India.

"When you have an environment of strong global economic growth and then you have a supply crisis, even if it is just 2 percent of global supply, it increases anxiety," he says.

That anxiety is also driven by the fact that the trip from oil pump to gas pump is a long and winding road. Pipelines, seaports, tanker fleets, refineries and the workers who run them are all over the Middle East and North Africa, and thus, at risk from disruption.

"That is one reason why the unrest in Egypt created anxiety in the oil market," he says. "Egypt is a net importer for oil, but it is a key transit point." And anxiety drives panicky buying, even hoarding, by institutions that use a lot of fuel, such as state governments or airlines.

Severin Borenstein, an oil economist at the University of California, Berkeley, says fear of higher oil prices can become a self-fulfilling prophecy.

"They see the chance that oil is going to be disrupted in the next month or two, and they get in and try to — either through the futures markets or through bilateral contracts — lock in prices," he says. "And as more of them do that, it drives up the price."

There is a safety valve at hand if gas prices skyrocket: about 700 million barrels of oil in the U.S. Strategic Petroleum Reserve alone. An infusion from the reserve might only be a psychological balm, but then psychology is a big part of what drives the oil market.