Accessibility links
Fighting Piracy At Sea And In Court Legal and military experts say the U.S. and other countries had better get busy with a coordinated answer to piracy, now that the level of violence has spiked. Four American civilians were killed off the coast of Somalia this week.

Listen
Fighting Piracy At Sea And In Court 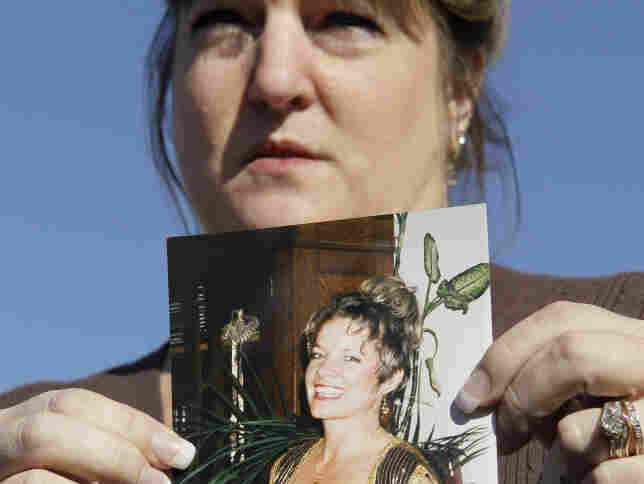 Nina Crossland holds up a photo of her aunt Phyllis Macay. The U.S. military says pirates killed Macay and three other American hostages they were holding on a yacht off Somalia's coast. Jeff Chiu/AP hide caption 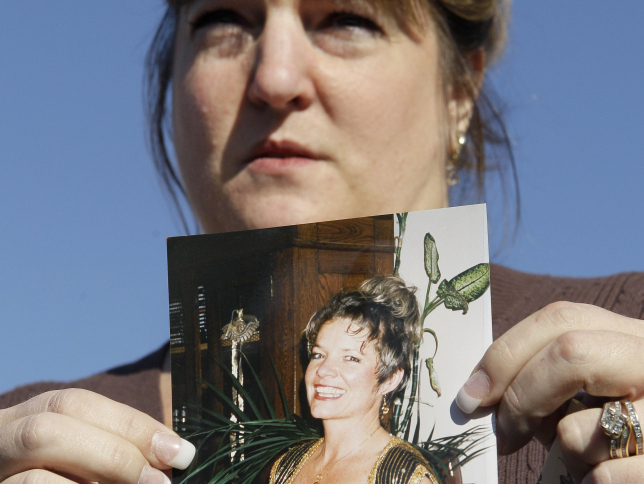 Nina Crossland holds up a photo of her aunt Phyllis Macay. The U.S. military says pirates killed Macay and three other American hostages they were holding on a yacht off Somalia's coast.

Until four Americans died this week after they were captured by Somali raiders, the United States and other countries considered pirates a nuisance. The world's navies catch and release hundreds of pirates off the African coast every year, and no one has worried too much about it.

The killings represent a new level of violence in the thriving high seas enterprise.

Fifteen pirates are now in custody in the incident, many of them headed to the U.S. to face criminal charges. But experts say that may be the worst option in fighting the piracy problem.

Nikolas Gvosdev, who teaches at the U.S. Naval War College, told NPR's Talk of the Nation that the killings could be a "9/11 moment," like when passengers and airlines decided they had to fight back against hijackers.

"The question is whether or not we've reached that tipping point in the waters off Somalia, where shipping companies and governments and the public say we can't tolerate this anymore," he said. "This isn't simply a price of doing business, that you accept some extra insurance payments and the cost of ransoms are spread out throughout the system, but something actually has to be done."

What has to be done is the subject of a big review by the Obama administration, and debate in the military and legal communities.

Piracy was the first internationally recognized crime. Governments worked together to stamp it out more than a century ago, only to see it return in full force, says lawyer David Rivkin. "We're talking about something that's come back," Rivkin says. "It's like a disease that's been virtually eradicated, that [has] sprung back and is just spreading like wildfire."

It's like a disease that's been virtually eradicated, that [has] sprung back and is just spreading like wildfire.

Rivkin says international cooperation is the solution, and he has called on the U.N. Security Council to create a special tribunal to handle pirates. He also wants the U.S. and Europe to give more financial support and training to African countries to help them deal with the problem.

But Eugene Kontorovich, who teaches international law at Northwestern University, disagrees. "I don't see a serious role for the U.N. here," he says.

And Kontorovich says governments all over the world are loath to prosecute pirates because "nobody wants these pirates hanging out in their jails, later to be released to gain asylum in their cities."

Kontorovich says the U.S. and other governments need to change the law, to make it easier to prosecute by targeting the trappings of piracy.

Poor Somali fishermen often carry big guns such as AK-47s to protect themselves, he says, "but if you have some kind of combination of rifles, [rocket-propelled grenades], grappling hooks, boarding ladders and dollar-counting machines, there we might presume that you are engaged in attempted piracy."

Countries followed a similar approach in the drug wars. For instance, they made it a crime to have mini-submarines. The law now assumes that if you have a submersible, you're using it to carry drugs.

But criminal prosecution has some drawbacks. It's expensive, and it can take a long time.

Attorney General Eric Holder is deciding where to send the pirates involved in the latest incident. He'll make an announcement once the men land on U.S. soil.

Gvosdev says the real solution to the pirate problem is not on the high seas but on land, because "this is a profitable business."

He says, "It is essentially the main driver for revenue in Somalia. It trickles down, from the businessmen who sponsor pirate attacks through to the pirates through to a whole variety of villagers and people who provide services."

He says the U.S. might want to consider economic incentives and social programs, such as starting a coast guard that would pay unemployed Somalis to police the waters themselves.