Accessibility links
The PS22 Chorus Goes To The Oscars The Academy Award show is Sunday night, and excitement is growing. There is one group performing you've probably never heard of: The PS22 Chorus, a fifth-grade glee club from Staten Island. 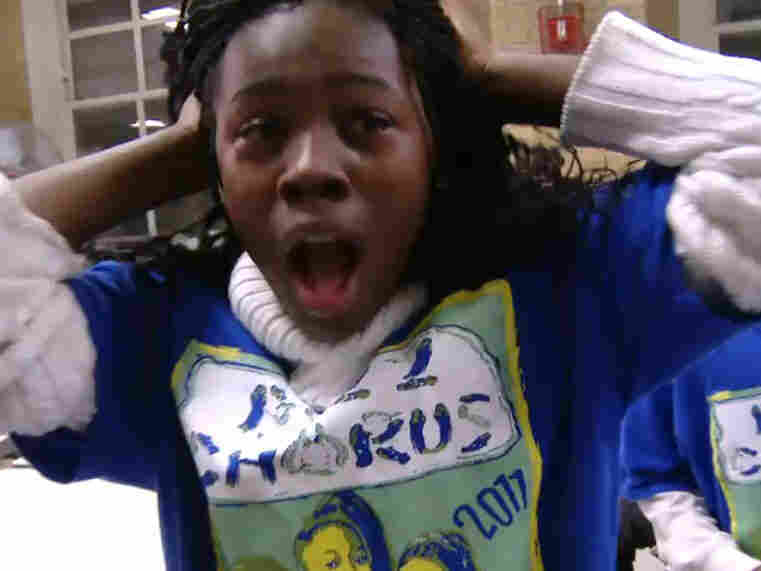 A PS22 Chorus member reacts to news that their glee club will perform at the Academy Awards. YouTube.com hide caption

The Academy Award show is Sunday night, and excitement is growing over what celebrities will wear, what they will say, and who will be the big winners. In addition, we can expect to hear some musical performances by Mandy Moore, Randy Newman and Gwyneth Paltrow (yes, she's singing).

But there is one group performing you probably don't know: The PS22 Chorus, a fifth-grade glee club from Staten Island.

After discovering the PS22 Chorus on YouTube, Anne Hathaway showed up at their Winter Recital in December to personally invite them to perform at the awards show. Needless to say, there was a lot of screaming.

Oscar host Anne Hathaway broke the news to the PS22 Chorus herself.

In 2006, musical director Gregg Breinberg started posting videos of the PS22 Chorus's rehearsals on the web, and when Tori Amos, Perez Hilton and eventually Oprah discovered these videos, they became an Internet sensation. Breinberg is particularly fond of arranging choral renditions of rock and pop songs. Their most popular video is of "Just Dance" by Lady Gaga, with almost 4.5 million YouTube hits.

Now Breinberg and over 60 10-year-olds are in Hollywood preparing for Sunday's performance. The PS22 Chorus will be singing "Somewhere Over the Rainbow."

As one glee clubber says, being chosen to perform at the Oscars is a "wet-your-pants moment."