Accessibility links
Former D.C. Schools Chancellor Michelle Rhee Aims To Put 'StudentsFirst' Michelle Rhee became one of the most controversial figures in education reform when she tied pay increases to merit and fired hundreds of teachers who she said were underperforming. Now, she's heading up a group to advocate on behalf of children — not special interests groups like teachers unions. 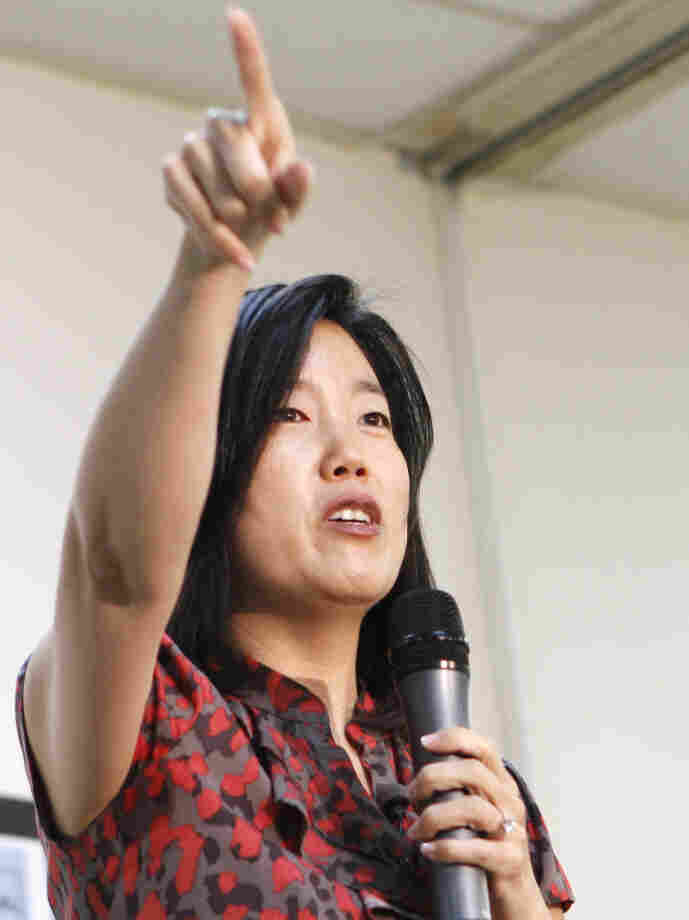 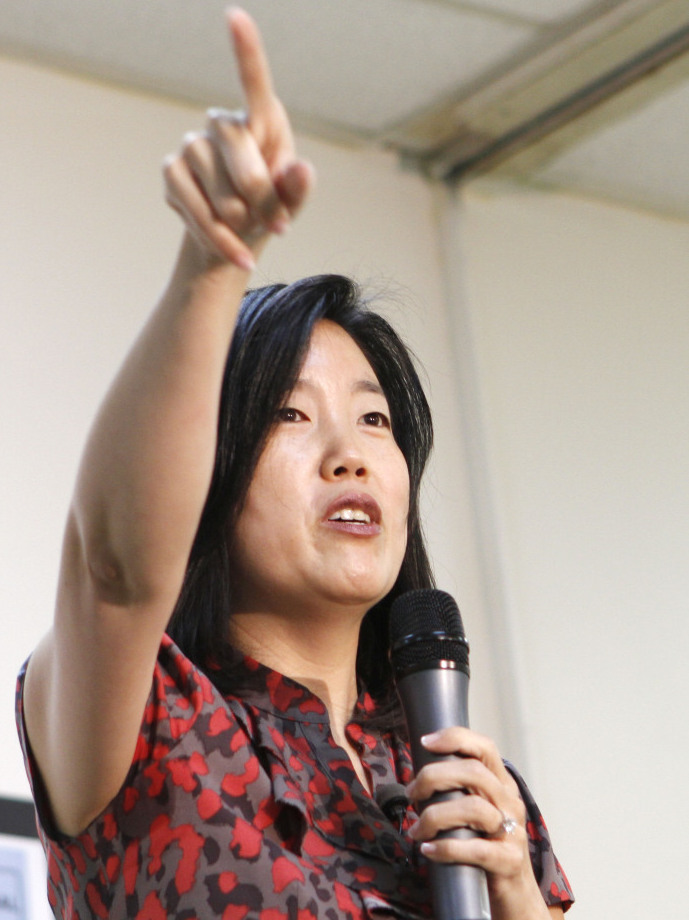 Michelle Rhee, former chancellor of Washington, D.C., public schools, speaks to staff and guests during a visit to a South Florida charter school in January.

It's not only Republicans like Wisconsin Gov. Scott Walker and New Jersey Gov. Chris Christie who are challenging unions. When it comes to teachers unions, increasingly it's Democrats like Michelle Rhee, the former chancellor of the public school system in Washington, D.C.

Rhee led the school district for almost three years. While she was there, she tied pay increases to merit rather than tenure and fired hundreds of teachers who she said were underperforming.

Those moves angered teachers unions across the country and made Rhee one of the most controversial figures in education reform. Now, she's heading up an education advocacy group based out of Sacramento, Calif., called StudentsFirst. With it, she tells Weekend All Things Considered host Guy Raz, she hopes to create a powerful lobby to push for education reform.

"Over the last 30 years, the education policy has been driven in this country by lots of special interest groups, including the teachers union," she says. "I think that one of the missing pieces is that there is no organized national interest group that has the heft that the unions and the other groups do who are advocating on behalf of children."

StudentsFirst will be working with governors and legislatures in what she calls "anchor states" that are interested in adapting all or most of its policy agenda. It will also be focusing on getting rid of "last in, first out" (LIFO) provisions across the country. Under these provisions, junior teachers — even those who are the most competent — are let go before more senior teachers during layoffs.

Over the last 30 years, the education policy has been driven in this country by lots of special interest groups, including the teachers union.

These "provisions make absolutely no sense for children," Rhee says. "The research shows that 1) you end up firing some of your best teachers; 2) you end up having to fire more teachers because the junior teachers get paid the least so you have to fire more of them to cover the budget deficit, and then 3) that it disproportionately negatively impacts the lowest performing schools — the highest needs schools — because they have the largest number of new teachers."

Rhee says StudentsFirst will base its policies on the best options for students, including the use of vouchers, which is not something you normally hear from Democrats.

Before becoming the head of D.C. public schools, Rhee says, she opposed vouchers. But she changed her mind once she saw the difficulties that many parents living in the poorest areas of the city had to face.

These parents would research the schools in their area, find that they were failing and consequently apply, through the lottery process, for their children to have the opportunity to attend a better school in the district. Many would not get a seat in the lottery, however, and ended up coming to Rhee for help.

"If I did not have a place for their children at one of my public schools that I would feel comfortable sending my own children to," Rhee says, "then who am I to deny that parent a $7,500 voucher — which, by the way, is $1,500 less than we were spending per child in the public schools — so that they could attend a good ... school."

Rhee says her job is to make sure children are getting a great education.

"If I can't provide that for them today but they can get it somewhere else, then that's got to be our goal," she says, "not preserving the system, but making sure that kids are getting a great education."