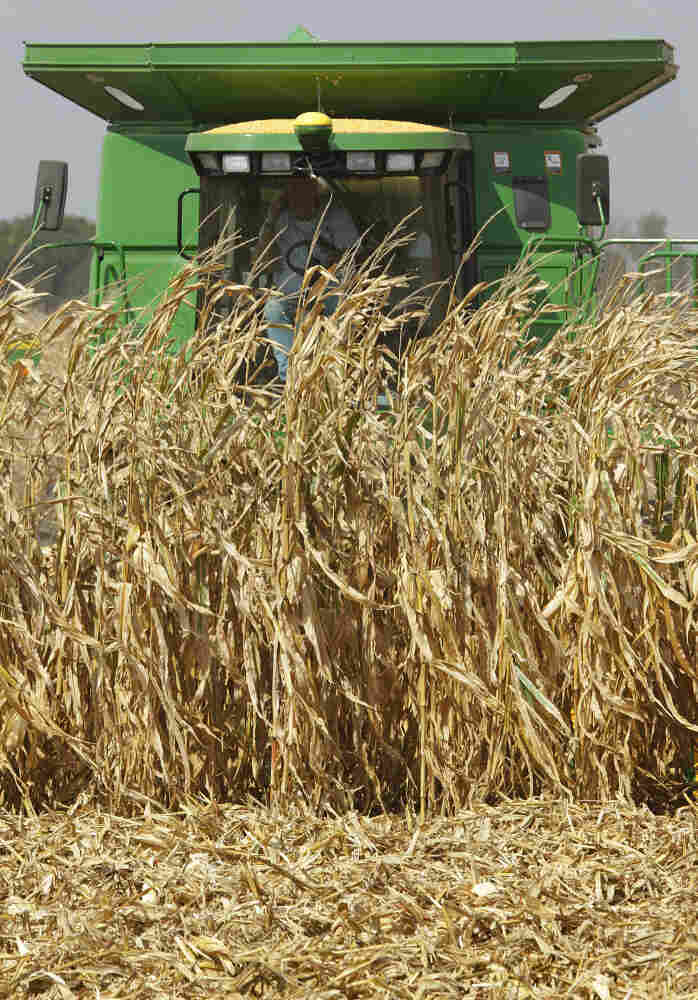 A farmer harvests a corn crop near Monticello, Ill., last September. The price of wheat and corn jumped 70 percent in the second half of 2010. Seth Perlman/AP hide caption

Sharp increases in food prices helped spark the political upheaval gripping northern Africa and the Middle East. Bad weather in key growing regions was among a confluence of factors driving prices to record levels, a U.N. analyst says. But the price spikes are giving U.S. farmers an incentive to boost production.

Underlying the food inflation is a more than 70 percent increase in the price of wheat and corn in the second half of last year.

Elevated food prices are hitting hardest in poor countries such as Haiti, Bolivia and Mozambique, where people spend more than half their income on food.

"People who are already undernourished may have to forgo a meal. It does add to the number of hungry people," says Abdolreza Abbassian, a senior economist for the U.N.'s Food and Agriculture Organization.

He says the situation is alarming, but not yet a food crisis like the one the world faced three years ago.

He says many factors have contributed to the upward pressure on food prices. There's demand for more varied diets in emerging economies such as China. And crops are being diverted for use in biofuels such as ethanol.

But the primary cause of the big spike in fuel prices is last year's bad weather: Russia's drought; rains in Pakistan, norther Europe and the U.S.; rains and floods in Australia; and dry conditions in Latin America.

"It looked like Mother Nature picked up the worst months to behave very bad," Abbassian says.

Russia's wheat-growing region was hit by the worst drought in 100 years. The huge wheat exporter halted shipments to foreign customers, including Egypt. Last week, Russian officials said they may extend the ban.

A decade ago, that might not have happened because government crop subsidies in the U.S. and Europe produced huge stockpiles. But a change in world trade rules ended those subsidies and the stockpiles disappeared. It was hoped investment in Third World farmers would take up the slack. But Abbassian says governments, including the U.S., have invested just a fraction of what was pledged.

"In spite of the declarations and statements made, really the investment in agriculture is lagging behind," he says.

Smaller stockpiles have led to more volatile prices. That volatility has attracted speculators who profit from rapid price changes. But, so far, there's little evidence that speculators are significantly boosting overall prices.

Bad weather may have set the stage for this spike in grain prices, but Greg Page, president of the global food giant Cargill, says that while supplies are tight, prices have risen more than was necessary. He says that's partly because of instantaneous global communication.

"People read stories about food prices going up and/or food being short and there's a natural hoarding instinct, I think, wired into all of us and people buy that extra 5-pound bag of flour or 2-liter bottle of vegetable oil," Page says.

People who are already undernourished may have to forgo a meal. It does add to the number of hungry people.

Abdolreza Abbassian, a senior economist for the United Nations' Food and Agriculture Organization

Multiply that by 100 million households, he says, and concern about a food shortage becomes a self-fulfilling prophecy. Governments got into the hoarding act, too, he says.

"The Saudis have made a public announcement about their intention to double their strategic reserve," he says. "The Algerians have made a similar statement in the last several weeks."

Other nations are buying up grain stocks, too. All of this has pushed prices higher. Luckily, Page says, those high prices are a signal for farmers.

An Incentive To Boost Production

Greg Westland produces hard red spring wheat and soybeans on about 5,600 acres in Cando, N.D. The snow is still deep in North Dakota, but Westland is preparing for planting, spending days in his shop with his sons, prepping equipment. The high prices have convinced him to try to boost the number of bushels he produces per acre.

Those yields would be about 20 percent above average. Cargill's Page says brisk fertilizer and seed sales indicate that farmers are responding.

"If nature gives them any collaboration at all I think we are clearly in a position to feed the world handsomely and actually to build some stocks this year based on the number of acres we would predict will be planted," he says.

As long as the weather cooperates. The U.N.'s Abbassian agrees. Both also acknowledge that climate change adds another level of uncertainty. Another wild card: the recent run up in the price of oil, which, if it persists, could boost already high food prices.