Accessibility links
The Antlers In Concert Despite making one of the year's best albums, The Antlers had trouble finding a label willing to put it out. The band self-released homemade copies of Hospice, but Frenchkiss Records has since stepped in to remaster and formally release it on June 23. See and hear the band's epic, wrenching rock in a full concert, recorded live from the Black Cat in Washington, D.C., on March 11.

Listen
The Antlers In Concert 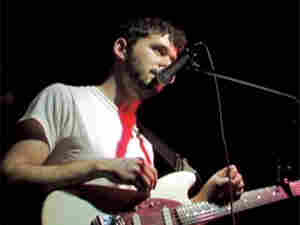 Peter Silberman, frontman for The Antlers, performs live with the band at the Black Cat in Washington, D.C., on March 11. Shout It Out Loud Music hide caption

Peter Silberman, frontman for The Antlers, performs live with the band at the Black Cat in Washington, D.C., on March 11.

This past February, All Songs Considered host Bob Boilen came by my desk holding a rare copy of the then-homemade Hospice CD by The Antlers. "You've got to hear this," he said. We trotted off to one of NPR's studios — a dark, cavelike space with an unusually good surround-sound system — and popped in the album. As the opening notes crept from the speakers, along with the eerie ambient rhythm of a hospital respirator, I was transfixed.

Hospice is an epic but intimate album of astonishing beauty, as well as one of the most moving, heart-wrenching set of songs I've had the pleasure of hearing. It evolves and unfolds majestically, soaring from hushed moments to grand, cage-rattling swells of shredded guitar noise. Antlers frontman Peter Silberman sings with a fragile and affecting falsetto, and possesses a great ear for melody and arrangement. He knows when to pull back and when to push.

Silberman conceived and wrote Hospice over the course of two years in his Brooklyn, N.Y., apartment, as a way to cope with the illness and death of someone who was close to him, but abusive.

"Hospice is essentially about myself and another person," Silberman says. "About our relationship and its dissolution. I had other people in mind, friends who have been in similar situations, or who have recently found themselves in dysfunctional environments."

I was incredulous when I learned that many labels had turned down opportunities to release Hospice. I spoke about it with a number of label reps in Austin, Texas, at this year's South by Southwest music festival, and everyone agreed that Hospice was a huge missed opportunity.

This spring, Frenchkiss Records, home to Passion Pit and The Hold Steady, finally stepped in. The label has remastered Hospice, giving the album a slightly warmer, fatter sound, and is reissuing it on June 23 as a digital download. Vinyl LPs and CDs will be available on Aug. 18.

Though Hospice is largely a conceptual studio album, The Antlers' members pull it off beautifully live. The band worked through most of the record at this concert, recorded live on March 11 at the Black Cat in Washington, D.C., with Silberman on guitar and vocals, Michael Lerner on drums and Darby Cicci on keyboards.

Thanks to Shout It Out Loud Music for producing the video for NPR Music. It's directed by Megan Brennan and Jon Sajetowski.