Accessibility links
The Art Of War On Invasive Species Some people fight invasive plants with chemicals and scorched-earth tactics. In Washington, D.C., graphic designer Patterson Clark turns them into art.

Weed all about it. This is National Invasive Species Awareness Week, an event sponsored by the Dow Chemical Company, the Weed Science Society of America and the U.S. Department of the Interior, among others.

Sworn enemies of non-native plants and creatures will gather in Washington for "activities, briefings and events to highlight what is being done across the nation and around the world to stop and slow the spread of invasive species." They will attend seminars with titles like "Waging War on Invasive Grasses."

Meanwhile, across town, Patterson Clark is skirmishing with invasive species in quite a different way: He is transforming them into art.

An artist at The Washington Post, Clark, 55, is a thin, angular man with a dark beard, a soft voice and a wry smile when he answers questions like, "Why do you hate weeds?"

Clark and his wife, Lenore Rubino, live on a no-outlet street in Washington, not far from Georgetown Hospital and the French Embassy. Their cozy row house backs up to Whitehaven Park, a leafy subset of the gargantuan, serpentine urban greenway called Rock Creek Park. One of the oldest holdings of the U.S. National Park Service, Rock Creek Park winds like a woodsy ribbon through the capital city. 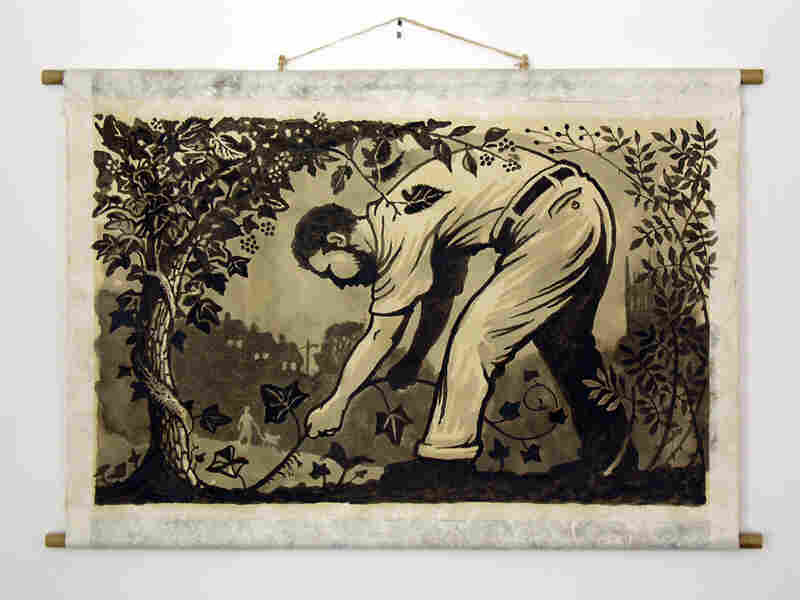 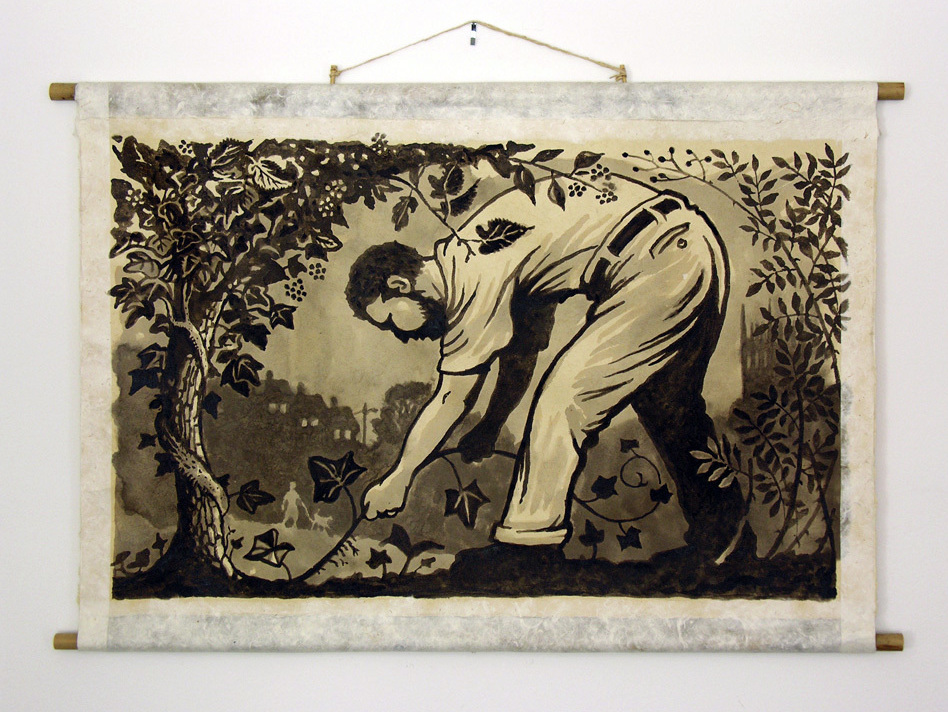 For Patt Clark, the idea of cleaning up the park began literally in his own backyard. Wanting to rid Whitehaven Park of unsightly vines and weeds that were interfering with the natural forest growth, Clark obtained a permit — and received training — from the National Park Service to remove invasive plants.

"One day I was pulling a weed, and I realized there was a little grain of hostility there toward this invasive plant," Clark says over a cup of ginger tea in his kitchen. "And I stopped and thought: I don't want to be this way in nature. I don't want to be in an adversarial mode when I'm in nature. So how can I change my attitude to make this more of a positive experience? And the word 'harvest' came to mind."

How, he wondered, could he honor the life of the plant he was destroying?

Being an artist — and the son of an Arkansas botanist — Clark began to experiment. He fiddled with one kind of weed as a paintbrush. He imagined another as paper. And before he knew it, he was engaged in a lovely, circular dance with the weeds.

Using the invasive plants and trees he harvested, Clark created art supplies — pens and brushes, inks and paints, papers and printing woodblocks and frames — and then he used those tools to draw and paint and capture in other ways the essence of the very plants he had plucked out of the ground in the first place.

By turning weeds into art that honors weeds, he found the meta in the metamorphosis.

"I really didn't start out to make art," says Clark. "I just started out trying to make paper.

Once he had paper in hand, he says, "there were some byproducts of the process that are normally thrown out that I wanted to figure out a way to use. And again I approached it from the same perspective, from the point of view of an artist." 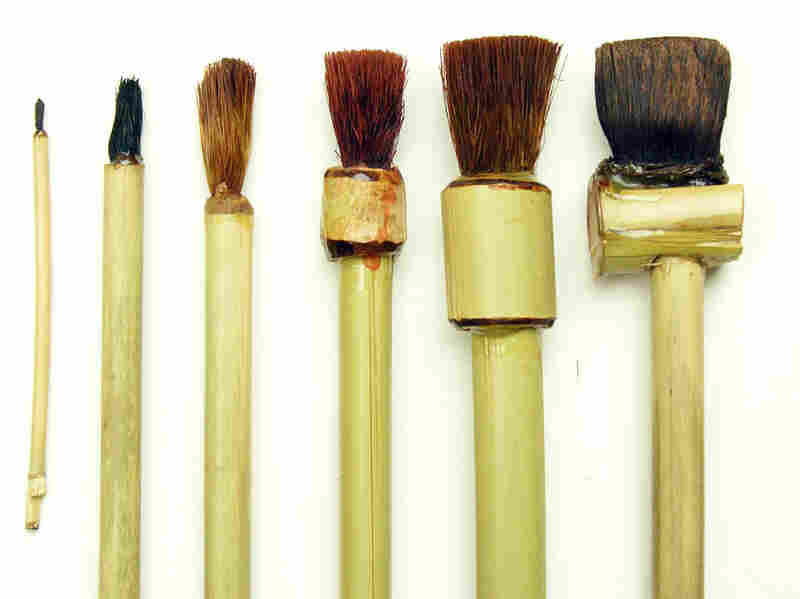 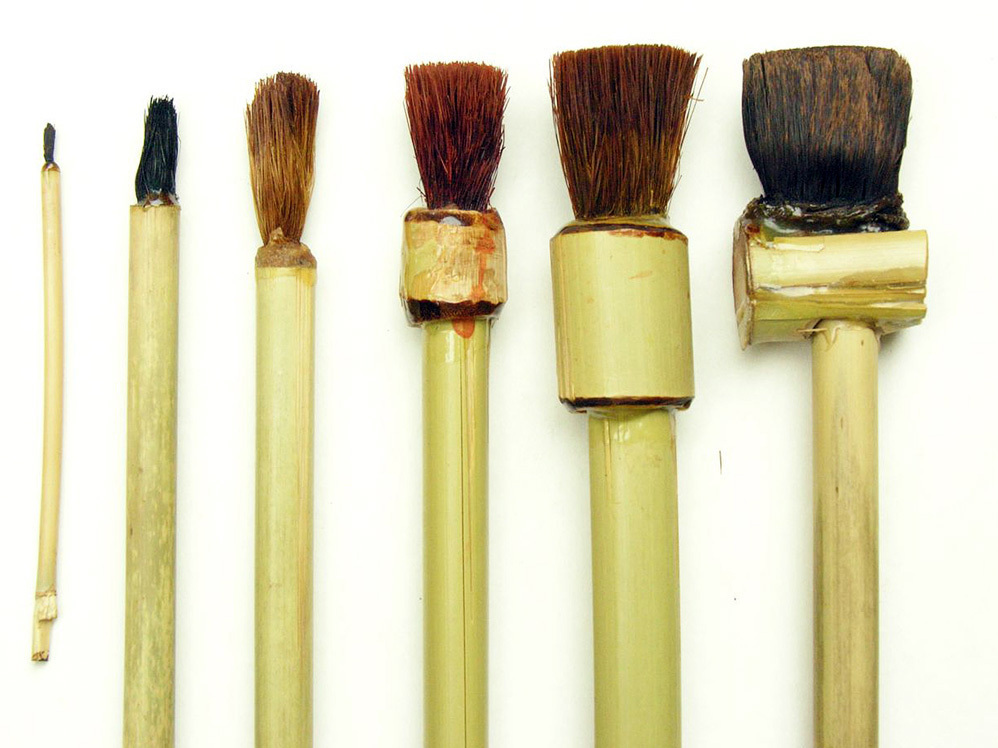 Brushes made out of invasive species

Through a patient process, he found that plant fibers unsuitable for papermaking can be made into ink or provide stiff, flexible material that can be crafted into paintbrushes. "The woody plants out there, if they are large enough, can be turned into printing blocks for relief printing," he says.

With a pair of clippers in hand, Clark makes a foray into the forest. He walks down a path and stops. He reaches into a crowding of dead, brown leaves and uncovers a healthy-looking, green-leaf vine that is running along a log. It's English ivy — the time-honored plant that covers the halls of some of America's most exalted universities.

Clark rips the invasive ivy up off the log and strips the leaves from the vine like a hunter skins a snake. He rolls the vine into a coil, which he will steam for 15 or 20 minutes. "Once I've steamed the coil," he says, "I strip the outer bark off. Now in some species the outer bark is what you want to make paper out of. But English ivy's outer bark is goopy. It shrinks too much. It's weak. And I just save it and burn it."

But the inside of the ivy, he says, "is sort of a creamy colored straw that I dry, put in a plant shredder, cook in an alkaline solution and then beat in a Hollander beater for several hours to get pulp, which I make paper out of."

He also derives inks from the ivy — brown and green and other hues. "I have an expanding color wheel that grows a little bit each year," he says.

With the various inks and papers, he often creates elegant depictions of weeds and weed harvesters.

Back in his house, Clark gives a brief tour of his studio-slash-shop-slash lab. Here are woodworking tools, plates of ink, planks of lumber. There are samples of paper, cups of bamboo shafts, shelves of various colored inks and an assortment of alchemy-like jars and bottles.

Clark's works — prints and scrolls and neat box-framed shrines — adorn the rooms. In the kitchen hang four handsome panels that resemble high-class particle boards. They are perfect examples of Clark's ex nihilo approach to art — making something from nothing. "Those are floor sweep slabs," he explains.

To create the lovely rectangles, he took the debris swept up from his studio floor, stuck it in a bucket, cooked it down and made thickish paper. On close inspection, the slabs contain fossil-like clues to the many materials he uses: white mulberry, paper mulberry, multiflora rose, English ivy, porcelain berry, garlic mustard. A veritable Enemies List of invasive plants.

"These are species that have overwhelmed the parklands, pushing out native plants and the animals that feed on them," Clark explains. "They're hurting the biodiversity of the area that I live in. So if I get out there and harvest these weeds, I am making space for these native animals and plants to repopulate."

He has created a website, Alien Weeds, that explains his work, and he is teaching other artists — through workshops and apprenticeships — to think and act and create the same way. "It's a slow process," he says. "But I think it's worth it."

There's the wry smile. "That's probably the most efficient way to get rid of some of these things," he says.

But, he adds, "I'm only allowed to use hand tools in the woods. I can't use chemicals, I can't use flame."

In his never-ending duel with invasive plants, he says, "all I can do is what I can do with my hands."