Accessibility links
If Power Shifts In Libya, Transition Could Be Bumpy Libyan leader Moammar Gadhafi's political genius has been his skill in creating a state that revolves completely around him while claiming that he has no formal role in government and is simply an adviser to the people. 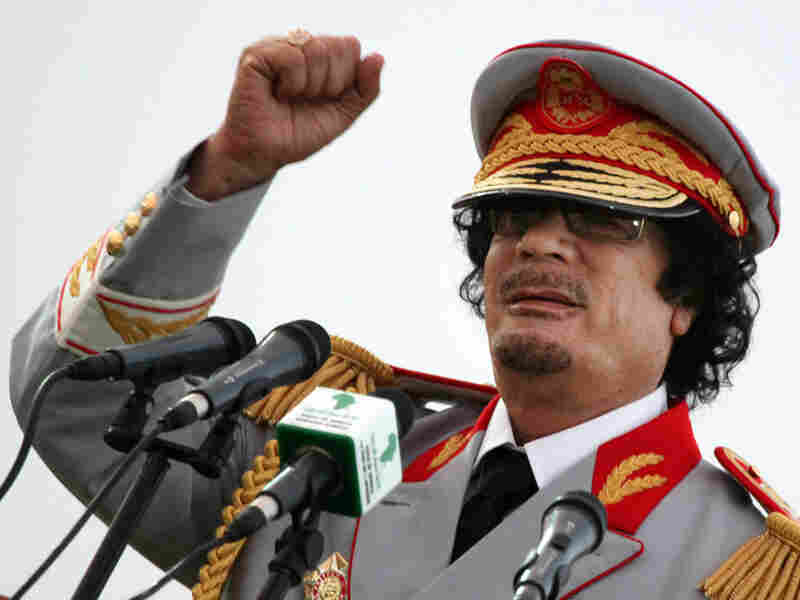 Libyan leader Moammar Gadhafi speaks in Tripoli on June 12, 2010, during a ceremony marking the 40th anniversary of the evacuation of the American military bases in the country. Abdel Magid Al Fergany/AP hide caption

If the popular uprising in Libya succeeds, and protesters drive leader Moammar Gadhafi from power, the transition could be far from smooth.

Gadhafi's political genius has been his skill in creating a state that revolves completely around him while claiming that he has no formal role in government and is simply an adviser to the people.

During his 42-year reign, Gadhafi has dismantled nearly all the state institutions of the former monarchy he overthrew in 1969, creating a form of government that only functions because of massive amounts of oil money, political repression and his own skills in playing off competing interests that might challenge his grip on power.

Professor Udo Steinbach at the Center for Near and Middle Eastern Studies at the Philipps University in Marburg, Germany, says Gadhafi "created a Libya of two systems — one built around Gadhafi, his sons and his family, the other around the 'people's committees.' "

Officially, the roughly 6 million citizens of Libya are ruled by a bewildering array of people's committees, from local neighborhoods right up to the national level. Many of these committees were either ineffective talking shops or had overlapping or contradictory responsibilities, creating a system where nobody knew who was responsible for anything, and who was supposed to be in control. Except that everyone knew who was really making the decisions — Gadhafi.

Although portrayed as a revolutionary system of giving direct control of the state to the people themselves, Dr. Alia Brahimi of the London School of Economics says the system "enshrines [Gadhafi's] inherent suspicion of state bureaucracies and institutions, and reinforced Gadhafi's divide-and-rule strategy," effectively preventing the development of any centers of power that could have challenged his leadership.

In the Tunisian and Egyptian revolutions, the armed forces were a source of national cohesion and stability — but Steinbach says that resource would be not available in Libya since the army is "practically useless" and Gadhafi "has divided it using the tribal system. It was never a national army in the true sense."

"Gadhafi was always suspicious of the army as a potential rival power base," says Brahimi, "and his rule has been riven with coup attempts, so the army has been deliberately emasculated and made powerless by Gadhafi."

Gadhafi was always suspicious of the army as a potential rival power base, and his rule has been riven with coup attempts, so the army has been deliberately emasculated and made powerless by Gadhafi.

Instead, she says, the Libyan leader has created "a number of militias which are ideologically and personally allied to the man himself."

"It will be a long and laborious process of rebuilding the power of the state," Steinbach says, and Libya will have to go back to its roots to find structures to replace the Gadhafi regime.

Unlike Tunisia and Egypt, Libya as a country is actually an amalgam of about 140 tribes and clans, and "the traditional tribal leaders have come up recently," Steinbach says. Two of the largest tribes, the Warfalla and the Misurata, were the first to declare against Gadhafi. But others, notably the Qadhafah and Magariha, provide many members of the security forces. So if Gadhafi goes, there could be competition for power and influence between the tribes.

But, says Brahimi, "the tribes themselves have been fragmented over time, and a huge element of Libya's population lives in the cities, and they are less identified by their tribal affiliation."

About 97 percent of Libya's population is Sunni Muslim, which could be a unifying force for a new Libya.

Steinbach sees an opportunity for the Senussi religious and political movement, which led the struggle for Libya's independence from Italy "and ran Libya quite effectively until the Gadhafi revolution." Its leader, the former King Idris, was overthrown by Gadhafi in 1969. Although some reports say up to a third of Libyans still claim affiliation to the Senussi movement, Brahimi of the London School of Economics says the movement isn't what it used to be. "Their networks and capabilities have been severely and deliberately weakened by Gadhafi."

As for mainstream religion: "Up till now, to be a cleric in a mosque in Libya, you essentially had to have the backing of the state, and most had been co-opted into the system," Brahimi says. However, she says, "it was significant when we heard [recently] that some imams were refusing to read out the weekly sermon that had been handed out by the regime."

Until the recent uprising, the most serious threat to Gadhafi's rule came in the 1990s, when he was nearly killed in an assassination attempt, and his security forces fought a series of battles against militants of the Libyan Islamic Fighting Group.

They "were physically crushed by Gadhafi and the remaining leadership put in jail," says Brahimi. "Although those leaders were released over recent years in return for a renunciation of violence."

For his part, Steinbach says he believes "there is a danger of Islamist elements, including the AQIM [Al-Qaida in the Islamic Maghreb] and other radicals" gaining influence in the chaos that would likely follow if Gadhafi falls.

In this case, says Steinbach, Libyans would have to rely heavily on "their intellectuals, especially intellectuals coming from abroad" to create a new system of government, "in a country with no structures, no parties and no constitution."

"Obviously there are tough times ahead," says Brahimi. "It's an unusual level of repression over an unusually long period of time."

But she sees grounds for optimism.

"There are a great number of intellectuals and a great number of very capable people in both Benghazi and Tripoli who are democratic reformers committed to rebuilding their country," she says. We should not underestimate the power of their message, she adds. "The notion of restoring human rights and democracy will find wide resonance in a society that has been kept in such isolation and under such repression for such a long time."