Accessibility links
Clinton: Gadhafi Using 'Mercenaries And Thugs' The U.S. secretary of state called on the Libyan dictator to leave power "now, without further violence or delay," as the U.S. and European nations freeze assets of the Libyan regime. Meanwhile, a rebel commander said his forces used anti-aircraft fire to repel an attempted aerial bombing in the eastern city of Benghazi. 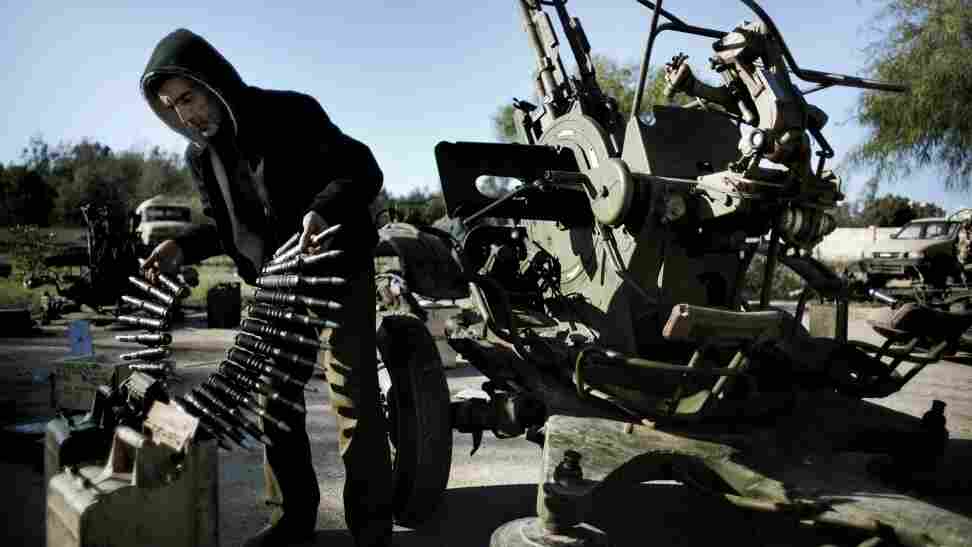 A Libyan civilian holds anti-aircraft ammunition at an army barracks in Benghazi, where dozens of civilians registered for civil defense training amid fears of air raids from Tripoli. Marco Longari/AFP/Getty Images hide caption 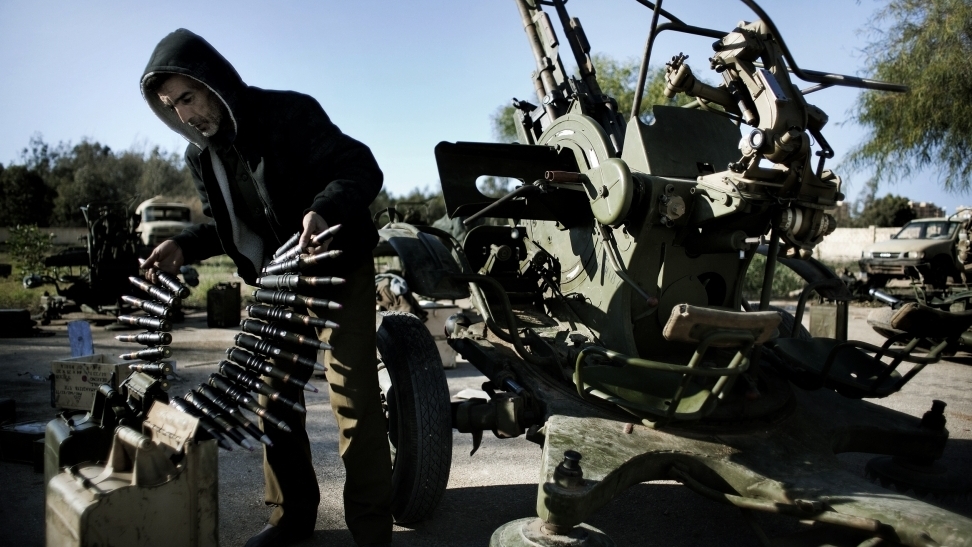 A Libyan civilian holds anti-aircraft ammunition at an army barracks in Benghazi, where dozens of civilians registered for civil defense training amid fears of air raids from Tripoli.

U.S. Secretary of State Hillary Clinton accused Libyan leader Moammar Gadhafi of using "mercenaries and thugs" against his own people Monday as rebels said they thwarted an attempted aerial bombing of an eastern city.

"Gadhafi and those around him must be held accountable for these acts, which violate international legal obligations and common decency,'' Clinton told the United Nations Human Rights Council in Geneva. "Nothing is off the table as long as the Libyan government continues to threaten and kill Libyan citizens." 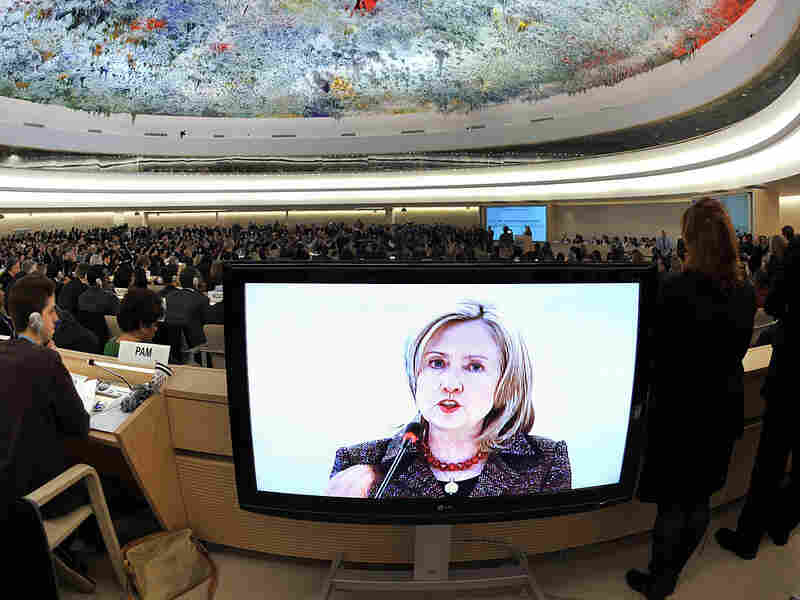 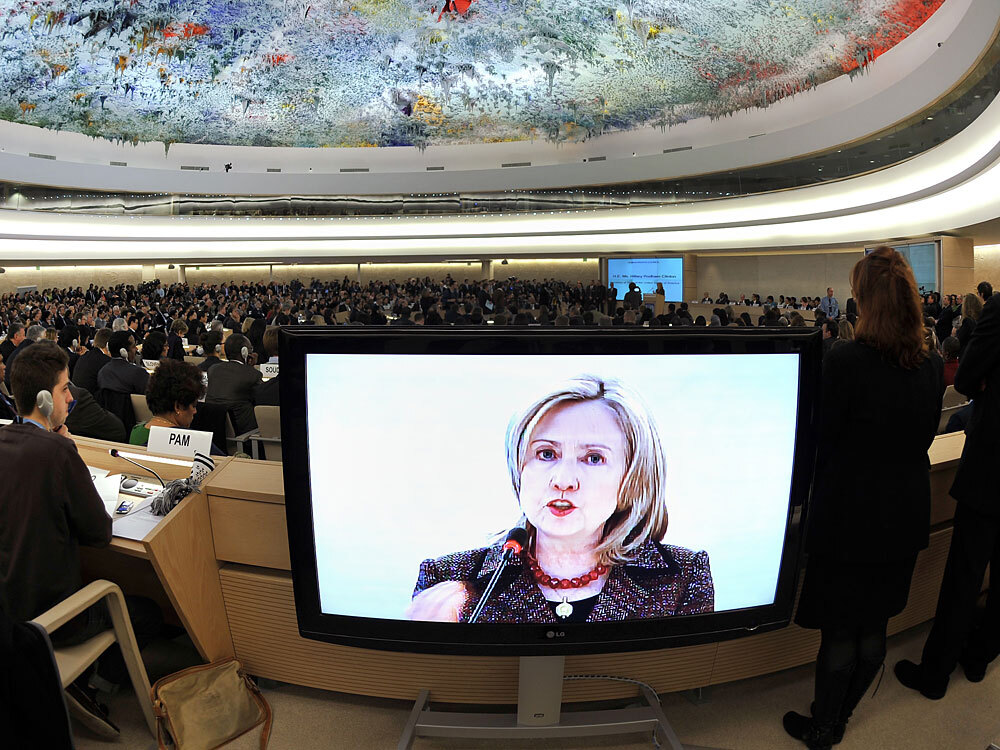 U.S. Secretary of State Hillary Clinton is seen on a TV screen while delivering a speech Monday before the United Nations Human Rights Council in Geneva.

She called on Gadhafi, who has ruled the North African nation with an iron fist since 1969, to leave power "now, without further violence or delay."

Gadhafi told the BBC on Monday that he would not step down, saying, "All my people love me."

Echoing the angry and dismissive tone he has exhibited throughout the crisis, Gadhafi accused the West of abandoning Libya and said it had designs on recolonizing the country. He challenged Western leaders to produce evidence supporting claims that he was stashing ill-gotten gains in foreign banks, saying he would "put two fingers in their eyes.

Assets Frozen In U.S. And Europe

Clinton's remarks were some of the Obama administration's strongest to date since rebellion and violence broke out in Libya. After her speech, the Treasury Department said it was blocking $30 billion in Libyan assets under U.S. jurisdiction.

At the same time, the European Union tightened the screws of international pressure on Gadhafi by agreeing to sanctions including an arms embargo and asset freeze.

EU ministers meeting in Brussels decided to impose the asset freeze and a visa ban targeting Gadhafi and two dozen family and government associates. The sanctions also ban the sale of tear gas, riot-control gear and other equipment that might be used for repression by Gadhafi. Germany went further, proposing to cut off all oil and other payments to Libya for 60 days to make sure the regime does not get more money to hire mercenaries to repress anti-government critics.

Could The U.S. Be More Forceful Against Gadhafi?

Could The U.S. Be More Forceful Against Gadhafi?

Europe's action was significant because it has much more leverage over Libya than does the United States — 85 percent of Libyan oil goes to Europe, and Gadhafi and his family are thought to have significant assets in Britain, Switzerland and Italy. Switzerland and Britain have already hit Libya with a freeze on assets.

Meanwhile, a rebel commander in the eastern city of Benghazi told NPR that his forces had repulsed an attempted aerial bombing there.

Col. Tarek Saad Hussein, one of numerous Libyan military officers to defect to the opposition, said the rebels used anti-aircraft fire to force the bombers to call off the strike. "We are expecting another attack with bigger numbers of aircraft," he said.

Hussein said government forces bombed a munitions storage in the town of Ajdabiya. There was no word on casualties. But state TV carried a statement by Libya's Defense Ministry denying any attempt to bomb the depot.

Hussein also said pro-Gadhafi forces had recaptured Ras Lanuf, a town west of Benghazi that is home to a major oil refinery complex. The reports could not be independently verified.

Fearing that Gadhafi might use aerial firepower to attack protesters, world powers were discussing the possibility of creating a no-fly zone over Libya. Human-rights groups say hundreds — perhaps thousands — of people have died in nearly two weeks of unrest.

Clinton said at a Geneva news conference that "we are actively considering" a no-fly zone, which would require the approval of the 15-member U.N. Security Council.

While some officials raised doubts about how countries could enforce such an order, Australian Foreign Minister Kevin Rudd announced his country's support for moves to establish a no-fly zone at the Security Council.

"Guernica is known throughout the world for the bombing of the civilian population," Rudd told The Associated Press, referring to the massacre during the Spanish Civil War. "We have seen evidence of that in Libya. Let us not simply stand idly by while similar atrocities are committed again."

British Prime Minister David Cameron told Parliament on Monday that he has not ruled out "use of military assets" against Libya and that the U.K. would help enforce a no-fly zone if necessary.

"We must not tolerate this regime using military force against its own people," Cameron said. "In that context, I have asked the Ministry of Defense and the chief of the defense staff to work with our allies on plans for a military no-fly zone."

In Washington, U.S. Sens. John McCain (R-AZ) and Joseph Lieberman (I-CT) said over the weekend that Washington should recognize and arm a provisional government in rebel-held areas of eastern Libya and impose a no-fly zone over the area — enforced by U.S. warplanes — to stop attacks by the regime.

The West also moved to send its first concrete aid to eastern Libya, which is mostly under the control of anti-government forces.

France announced that it was sending two planes with humanitarian aid to the eastern port city of Benghazi in what Prime Minister Francois Fillion described as the beginning of an operation to push Gadhafi from power.

"It will be the beginning of a massive operation of humanitarian support for the populations of liberated territories," Fillion said on RTL radio. He said Paris was studying "all solutions" — including military options — so that "Gadhafi understands that he should go, that he should leave power."

On the ground in Libya, rebel forces have consolidated their hold on the east. In Benghazi, opposition leaders established a national council to manage day-to-day affairs — a step toward forming an alternative government to the existing regime.

Gadhafi remained dug in in the capital, Tripoli, backed by security forces and militias even as the opposition worked to shore up its hold on the key cities of Zawiya and Misurata.

In Zawiya, a mere 30 miles west of Tripoli, residents said they were anticipating a possible attack by pro-regime troops to try to retake the city. "Our people are waiting for them to come and, God willing, we will defeat them," a resident who only wanted to be quoted by his first name, Alaa, told AP.

Amid the struggle for power, the town of Sirte — Gadhafi's hometown — has emerged as a key battleground. Sirte, located about halfway between Tripoli and Benghazi, remains in the hands of pro-Gadhafi forces, and rebel commanders say it has assumed strategic importance.

The city serves as "a link between the east, the west and the south. All roads go through Sirte," a local policeman named Juma'a told NPR by phone during a visit to Benghazi. He said it was defended by about 4,000 government troops and armed tribesmen loyal to Gadhafi.

"This town is very important to Gadhafi, because it's where he comes from. His tribe, his supporters, his relatives are all from there," Juma'a said. "The people of Sirte are afraid that if the regime falls there will be reprisals against them."

Hussein, the rebel commander in Benghazi, told NPR that he was calling on the people of Sirte to rise up against Gadhafi. He said his message is "you are either with us or against us."

Hussein said a government-controlled Sirte has become a major obstacle to the spread of the rebellion.

With reporting from NPR's Lourdes Garcia-Navarro in Benghazi, Libya; Eleanor Beardsley in Paris and Teri Schultz in Brussels. This story also contains material from The Associated Press.