Accessibility links
The Root: The Bad Romance With Dictators As the situation in Libya worsens, Jack White of The Root takes a look at the number of black leaders who in the past have paid homage to Libyan leader Moammar Gadhafi and other ruthless African heads of state, and argues that they should have set a better example.

The Root: The Bad Romance With Dictators

The Root: The Bad Romance With Dictators 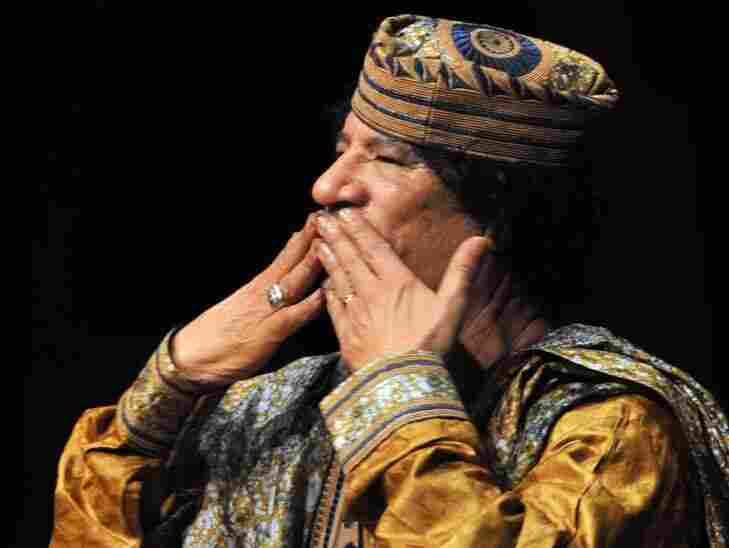 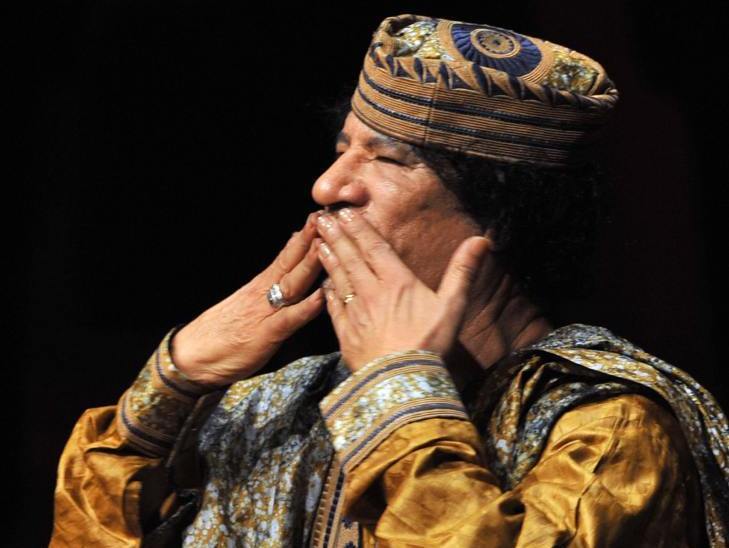 Libyan leader Moammar Gadhafi blowing kisses to the audience after delivering a speech in Rome in 2009. Gadhafi still clings to power this week as protests continue to upset Libya.

Jack White is a frequent contributor to The Root.

It's one thing to give a pass to Beyoncé, Usher and Mariah Carey for shaking their booties in exchange for big bucks from the thuggish sons of Libyan dictator Col. Moammar Gadhafi. As my colleague Jenée Desmond-Harris points out on The Root, they aren't foreign policy experts, and some never made it through college. They may not have known any better.

But you can't say that about the so-called black leaders who should have set a better moral example by steering clear of murderous despots like Gadhafi, whose malicious mischief over the years has caused the deaths of hundreds of thousands of Africans. Instead, some of our most prominent figures have cultivated relationships with brutish regimes in Africa, sometimes in the hope of a big payoff.

During the 1970s, for example, Roy Innis, head of the moribund Congress of Racial Equality, actually strove to drum up support for Idi Amin, the butcher of Uganda, who was responsible for at least 300,000 deaths. Innis declared that "Ugandans are happy under General Amin's rule of Africa for black Africans" and honored the tyrant with a lifetime membership in his organization. (Coincidentally, Gadhafi sent thousands of Libyan troops to Uganda in an unsuccessful attempt to defend Amin from an invading Tanzanian army that finally overthrew him.)

Then there was the Rev. Jesse Jackson's 1993 trip to Nigeria, during which he lavished praise on military dictator Gen. Ibrahim Babangida as "one of the great leader-servants of the modern world in our time." This, I once observed in a story for Time magazine, was the same Babangida who had ruthlessly suppressed political opponents, closed down independent newspapers, and allowed his country to become a major transshipment point for heroin and other illegal drugs to which millions of U.S. citizens are addicted. Was it a coincidence that after that effusive outburst, Babingida provided Jackson with a Nigerian Airways jet for a tour of southern Africa and encouraged his cronies to contribute hundreds of thousands of dollars to Jackson's causes in the U.S.?

Three years later, then-U.S. Sen. Carol Moseley Braun made her own sentimental visit to Nigeria — where she declared that strongman Gen. Sani Abacha, a far more vicious autocrat than Babangida, had been misunderstood and unfairly castigated by the press. This was the same Abacha who, among other crimes too numerous to list, orchestrated the execution of playwright and environmental activist Ken Saro-Wiwa on transparently trumped-up charges. Braun at least had the decency to subsequently admit that her visit and remarks had been a mistake and apologized for it.

Not so for Nation of Islam leader Louis Farrakhan, who has never expressed a trace of remorse for his decades-long romance of Gadhafi. The same year that Braun dropped in on Abacha, Farrakhan paid a visit during one stop on a whirlwind tour of tyrants. In addition to Abacha, whom he grandiloquently likened to Moses, Farrakhan praised the government of Sudan — which was then engaged (with Libyan support) in slaughtering thousands of people in a long-running civil war — for its "wise Islamic leadership." He then moved on to Iran — where he promised to help overthrow the "Great Satan," as the U.S. is known locally — and Iraq, where he voiced support for Saddam Hussein's fight against U.N. economic sanctions.

The stated purpose of Farrakhan's junket was to find out for himself whether Western reports about totalitarian conditions in these benighted countries were true. But his real intent seems to have been to exonerate the regimes he sucked up to, in exchange for a potential big payoff.

The clearest example was the praise he lavished on Gadhafi on a stop in Tripoli, in exchange for which the Libyan dictator lavished him with a $250,000 human rights award and a promise of a $1 billion gift for his organization. Sadly for Farrakhan, the U.S. government would not allow him to accept either sum.

At the time of Farrakhan's visit, Gadhafi was up to serious bad business in West Africa, where his protégés — Liberian President Charles Taylor and his ally, Sierra Leonean rebel Foday Sankoh — had instigated civil wars that led to the deaths of hundreds of thousands of people. Both Taylor and Sankoh — whose trademark tactic was to hack off the hands, arms and feet of his countrymen — had been trained, equipped and funded at Gadhafi's insurgency camps before being dispatched back to their countries. Gadhafi had blood all over his hands.

Gadhafi's deep involvement in the genocidal conflicts in Liberia and Sierra Leone was no secret at the time of Farrakhan's visit. Since then, the evidence of his culpability has been front-page news as Taylor stands trial for human rights in an international court.

You would think by now, with Gadhafi's savage crew of militiamen and mercenaries mowing down revolutionaries in the streets, that Farrakhan would have second thoughts about his flirtations with a mass murderer — but so far neither he nor his organization's newspaper, Final Call, has uttered a peep on the issue.

With examples like this, it's no wonder that ignorant entertainers have few qualms about accepting bloodstained dollars in exchange for their services. They're only doing what some of their leaders have done.